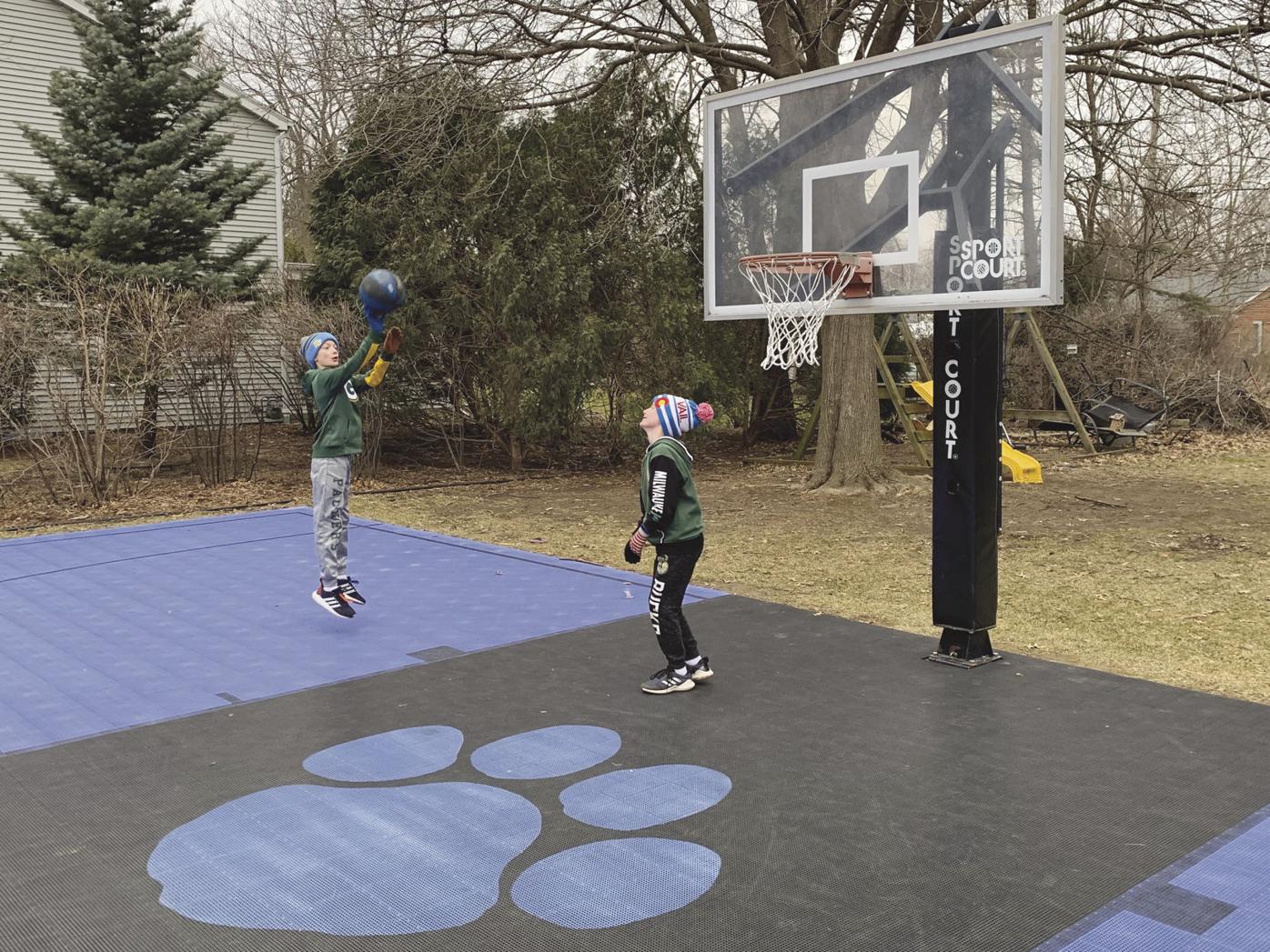 Janesville’s Grant, left, and Blake Lindau shoot hoops on the backyard court of the Badertscher family on Janesville’s east side on March 16. A story about the court was featured in The Gazette on March 17. It was one of sports editor Eric Schmoldt’s favorite stories of 2020, a year in which the entire sports world—from high schools to the pros—screeched to a halt at the beginning of the COVID-19 pandemic. 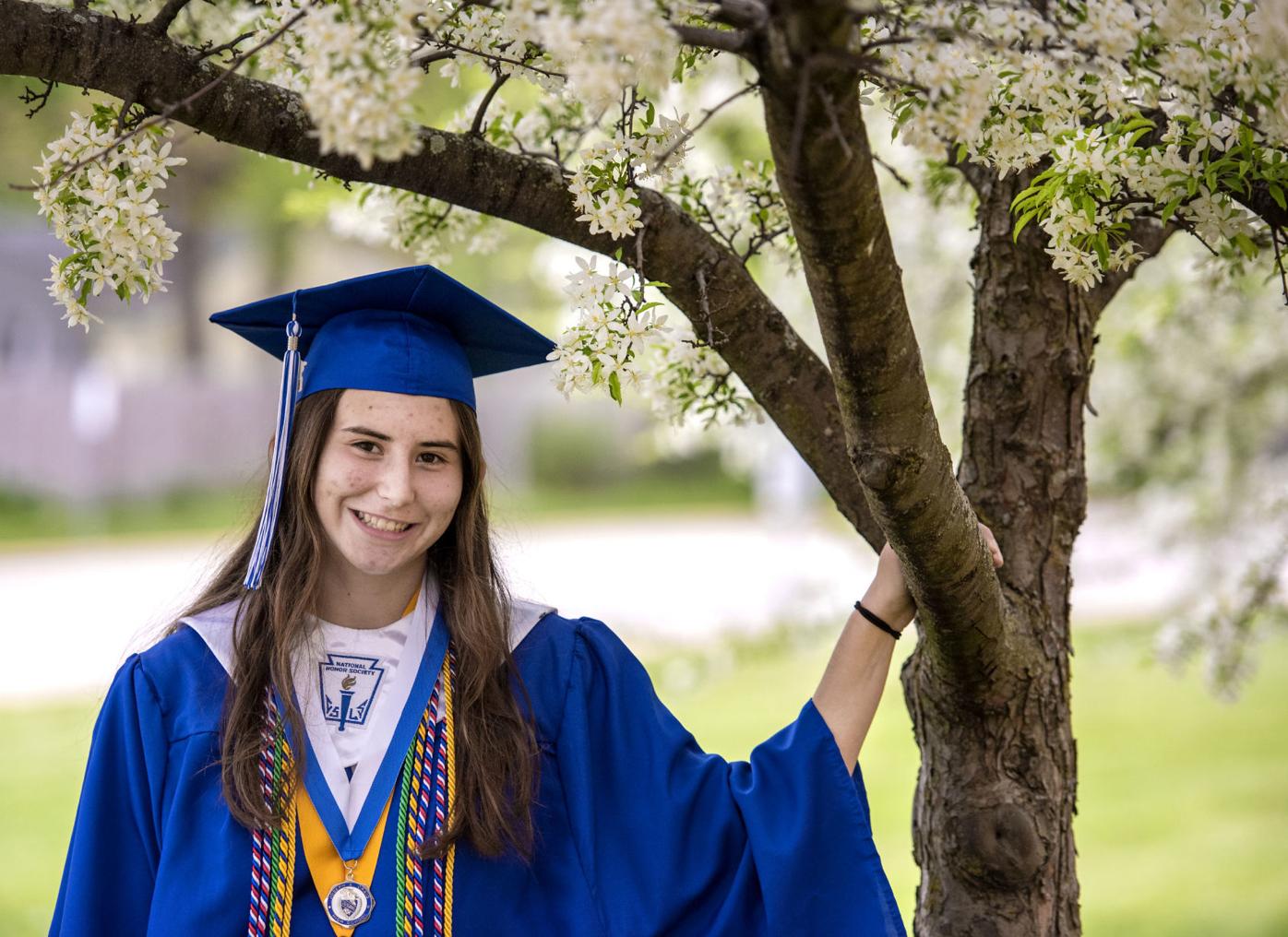 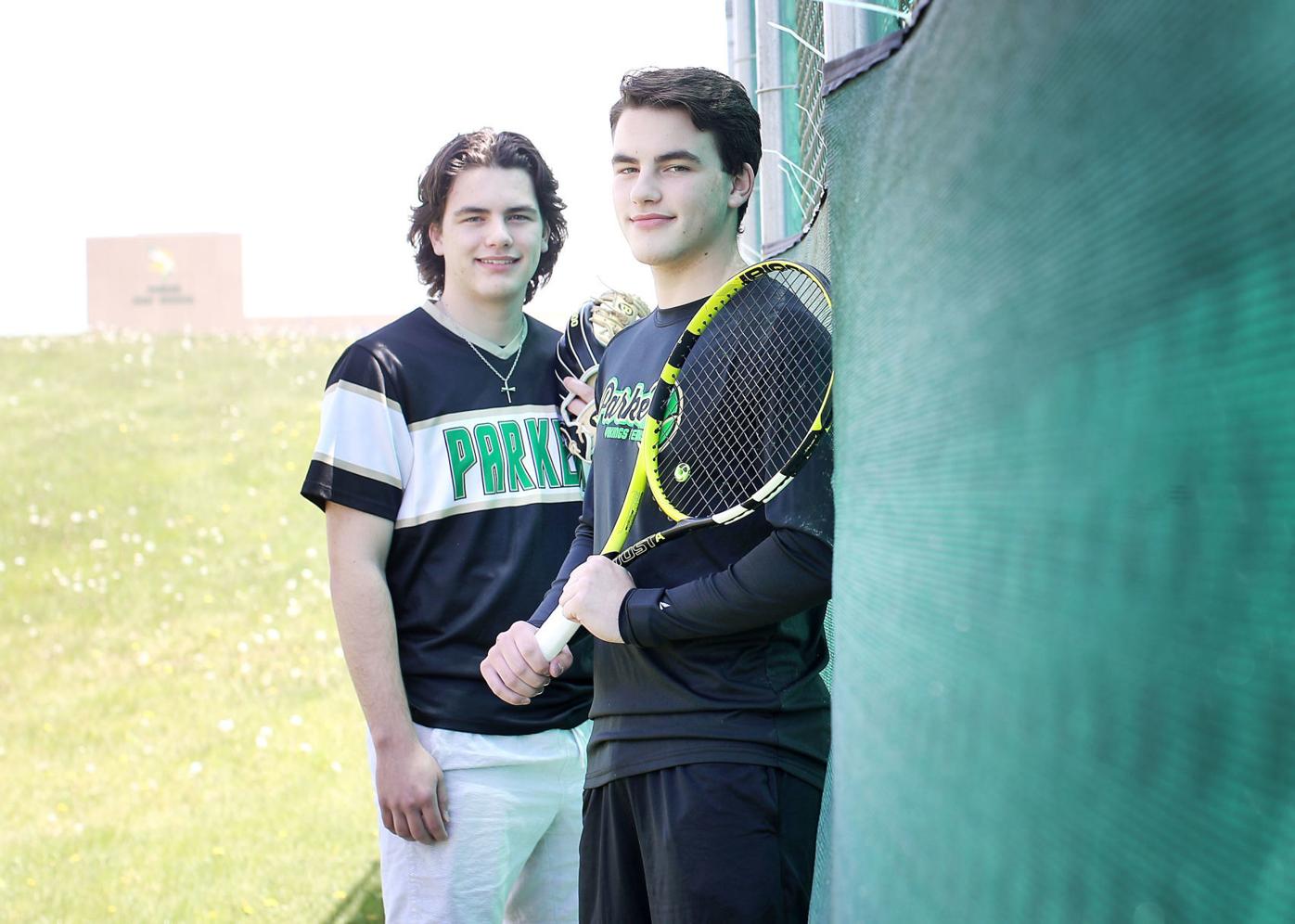 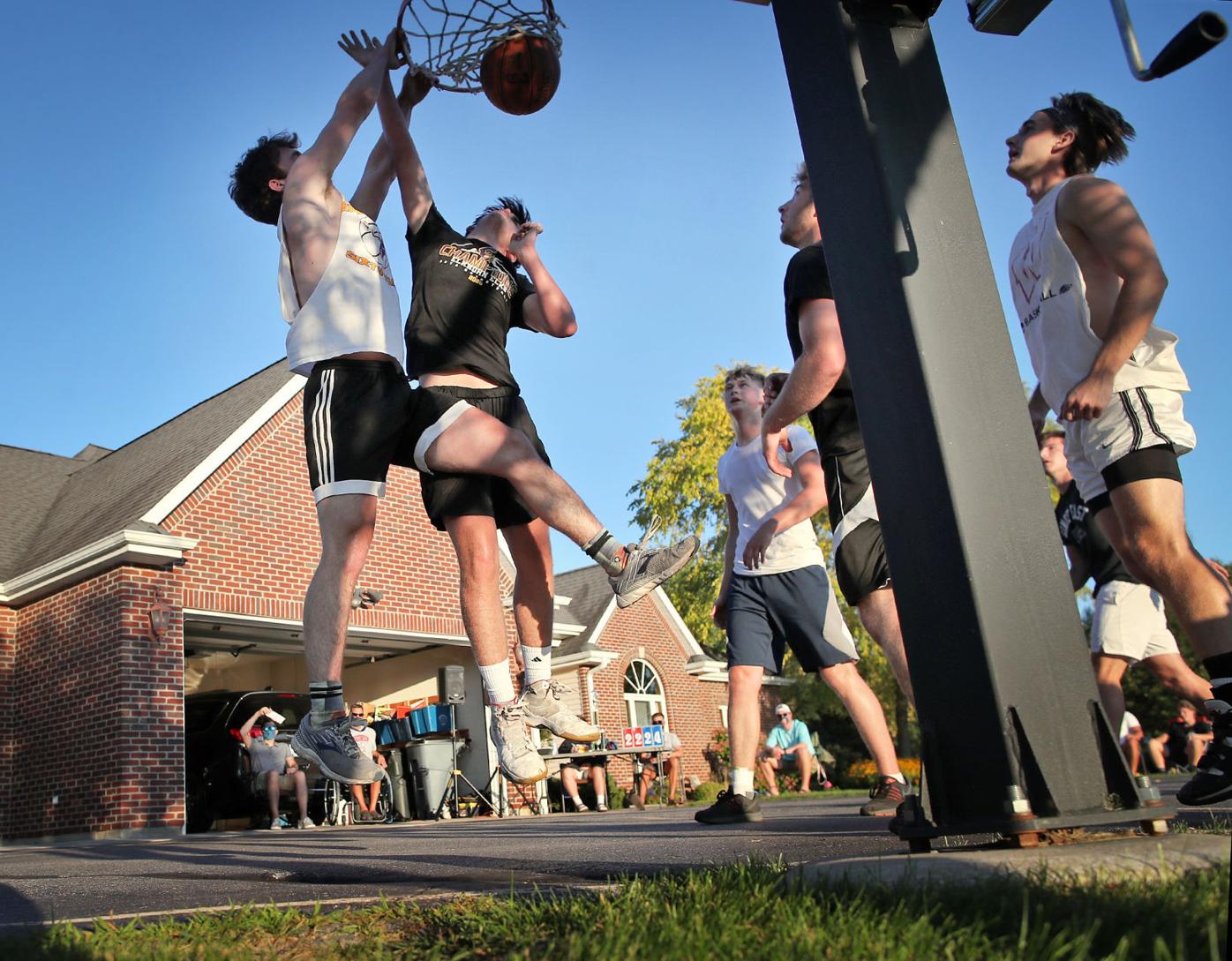 Alec Birbaum dunks the basketball over Benny Lauderdale during a championship game of the Elkhorn Mini Hoop League on Tuesday. Four years ago, a group of Elkhorn Area High School students started playing basketball for fun on an 8½-foot hoop. It has grown every year, and this year there were 17 3-person teams in the MHL. 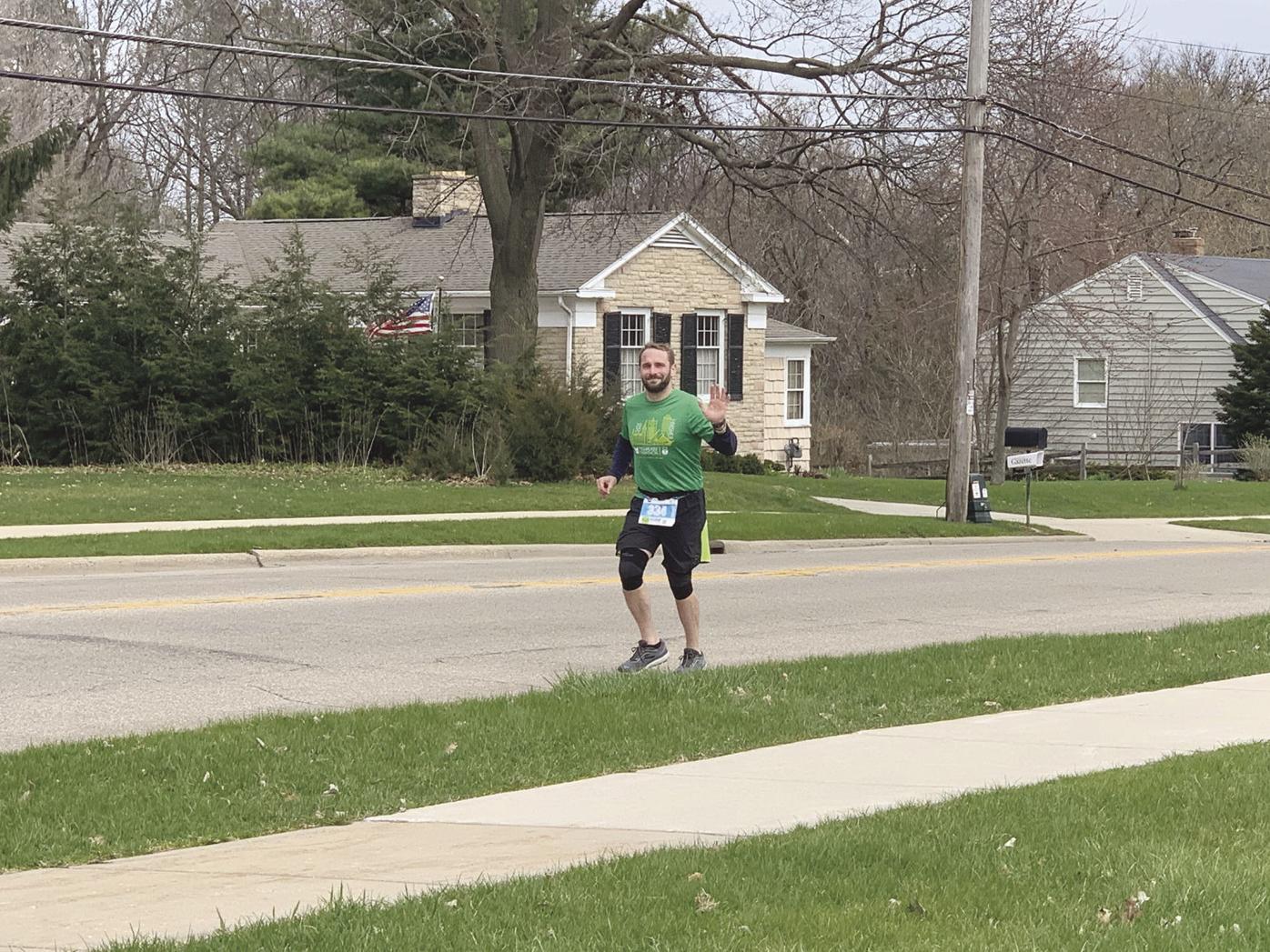 Janesville's Adam Riley gives a wave during the final mile of his marathon Saturday, April 11, 2020. Riley had signed up to take part in the Milwaukee Marathon, but the race was canceled due to the coronavirus pandemic. Organizers encouraged participants to complete their race "virtually" at a time and place of their choosing. It was Riley's first marathon. 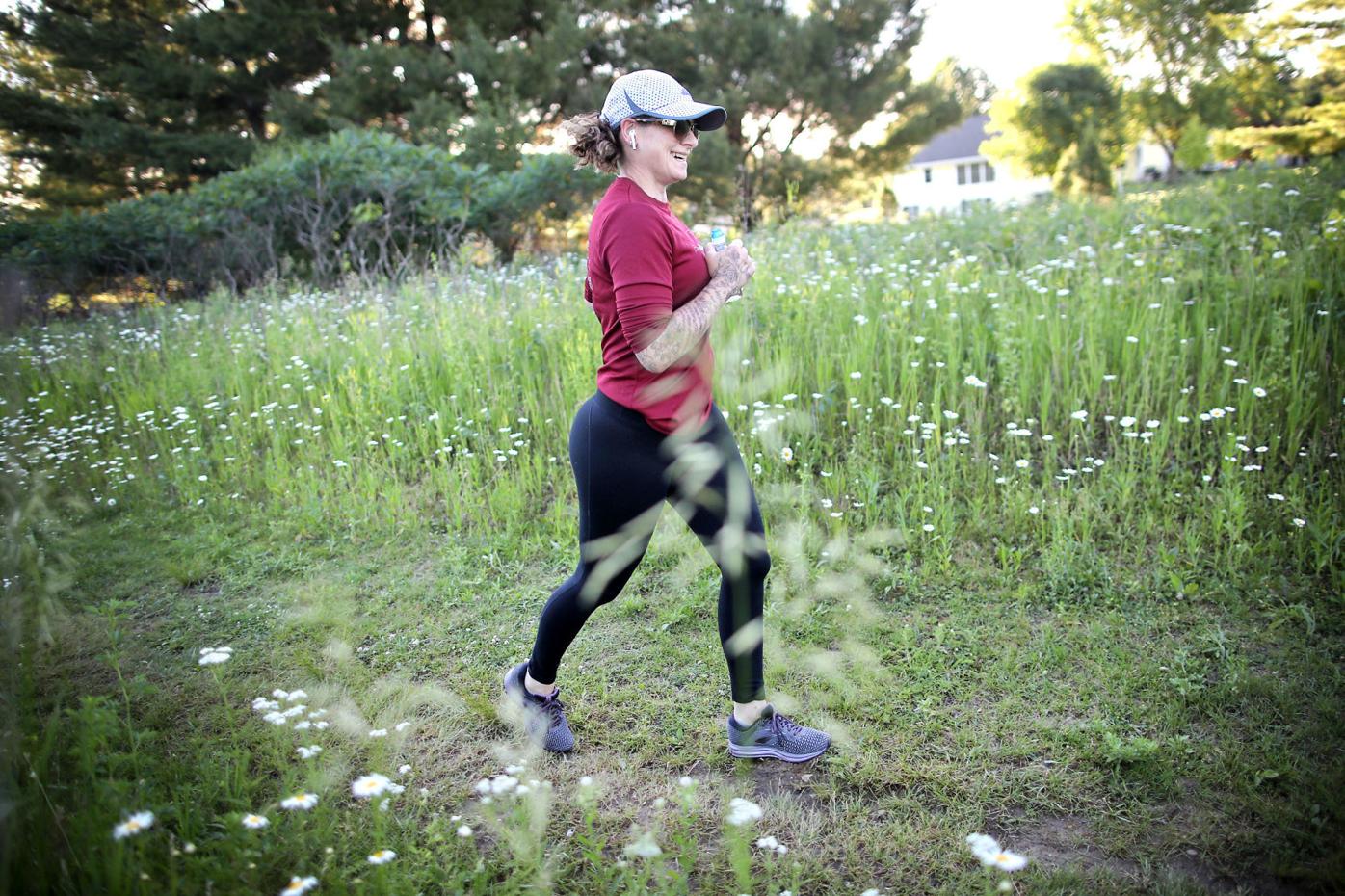 Tanya Suiter is all smiles as she nears the finish line of the Janesville 5K Trail Run, a 5-kilometer out-and-back race on the Ice Age Trail last Saturday morning.

The “free-throw line” bare spot on the lawn has filled with grass.

The berm my mom thought would be a nice yard feature until it became my pitcher’s mound is long gone.

The 30-foot antenna pole, though, still stands, serving as a reminder that TV watching didn’t always include hundreds of channels and hundreds of dollars in fees.

I didn’t notice any of this when I ran by the house I grew up in on the “big circle” in Janesville in July. You only notice when you slow down and admire the little things.

But if you came here looking to dwell on it, you’ve come to the wrong space.

The way I see it, you can either continue into 2021 lamenting about how it was generally probably one of the worst years ever. Or you can find some perspective in some of the little things and move forward.

Typically I would use this column to rehash some of the area’s best sports moments of the year.

Elkhorn and Delavan-Darien continuing their boys soccer dominance by advancing to their state tournaments.

But 2020 will mostly be remembered as a year when we lost out on many high school stories.

I’ll always wonder if that Turner team would’ve won another game to get to state or what Janesville Craig’s massive senior class might have accomplished in its final girls soccer season together.

Yet, out of the disaster that was a completely canceled spring sports season, came probably my favorite project in my eight years with The Gazette.

Every single day in the month of May, we told the story of at least one area high school senior who was missing out on their final season.

It was a good reminder that covering events is fun, but more than anything I want to help tell the stories of area student-athletes.

One of the best lessons a young writer learns is, “write what you see.”

Never was that simple phrase needed more than when covering sports in 2020.

Out: being able to look at a schedule to pick out a game to cover. For much of the year, schedules weren’t even a thing.

In: canvassing the area for anything “sports.”

And we found some fun ones.

Like a basketball court in my neighbor’s yard that is now in its second generation of providing kids a fun, safe place to play.

Like Elkhorn’s Mini Hoop League featuring high school and college-aged Elks going at it in three-on-three basketball on a lowered rim.

Like some Janesville high schoolers putting together a two-on-two football league.

And like Janesville’s Adam Riley running up and down Ruger Avenue several times to complete a virtual marathon and accomplish a goal of finishing a marathon by the time he turned 40.

The set schedules slowly continue to return, and that makes life a little easier when it comes to mapping out a sports section.

But stories are lurking everywhere, and at the end of the day it’s all about writing what we see.

Along with keeping our eyes peeled for stories, we used the pandemic break from sports to write about some of our fondest sports memories.

Many folks did, and we printed quite a few of them to help us get through those dark days.

Former Gazette personality Mike Dupre’ harkened back to the greatest game he ever saw during his Little League baseball coaching days.

Janesville resident Gary Dulin took us back in time to neighborhood stoopball.

Former teacher and coach John Sonka told us about some of the life lessons he learned through running.

Mike Stearns gave us good laughs while reliving a botched “buzzer-beater” shot and living through the Packers’ “gory years.”

At the beginning of the pandemic, someone asked me how we’d have a sports section when there were no sports.

This was a year when, more than ever, it felt like people were forced to choose sides and face off with one another.

But even in 2020, we were reminded there are a lot of really good people—even those you might not agree with!—willing to help during the tough times.

Brian Kitzman and the Facebook group folks with “Morning Afternoon And Night Run Group—Janesville” sort of filled all the above categories for me in 2020.

I wrote about what I saw when I ran a socially distanced 5k that Kitzman—an assistant track and field coach at Janesville Craig—organized early in the pandemic.

And he and the group deserve thank yous for putting on quite a few responsible events when all races have pretty much been shut down due to COVID-19.

Running outside was a respite when everyone was stuck at home. By the time the clock strikes midnight tonight to usher in 2021, I’ll have run a little shy of 800 miles in 2020. My previous high was 549.

Kitzman’s events helped me push me. I ran a 10k for the first time in my life. And on July 29, when he set up a one-mile run that was one lap around the “big circle” in my old neighborhood, I decided to try and run a mile in under six minutes for the first time ever.

But, like I said, there was no time during that run to slow down and check out the old stomping grounds.

I did that another time while just out getting a workout in. And that pit stop drummed up some good memories.

Like using my mom’s landscaping to try and hone my skills during my mediocre Little League career. Or ruining the edge of the lawn during countless games of “21.” Or just watching whatever was on network TV because we didn’t get cable until I finally convinced my parents we needed ESPN.

But when my kids ask me then about the pandemic year of 2020, I’m not going to say it was the worst year ever. I’m going to tell them we made the best of it.

That we had a whole lot of family time together, and there’s nothing better than that.

That it was the year that really drove home my passion for running.

That going out for Friday dinner is fun, but takeout fish fry and old fashioneds at home can be a fun alternative.

And that we learned not to take sports for granted, because for the first (and hopefully only) time in our lives, they were completely taken away.

Take a minute to slow down today and remember the good from 2020.