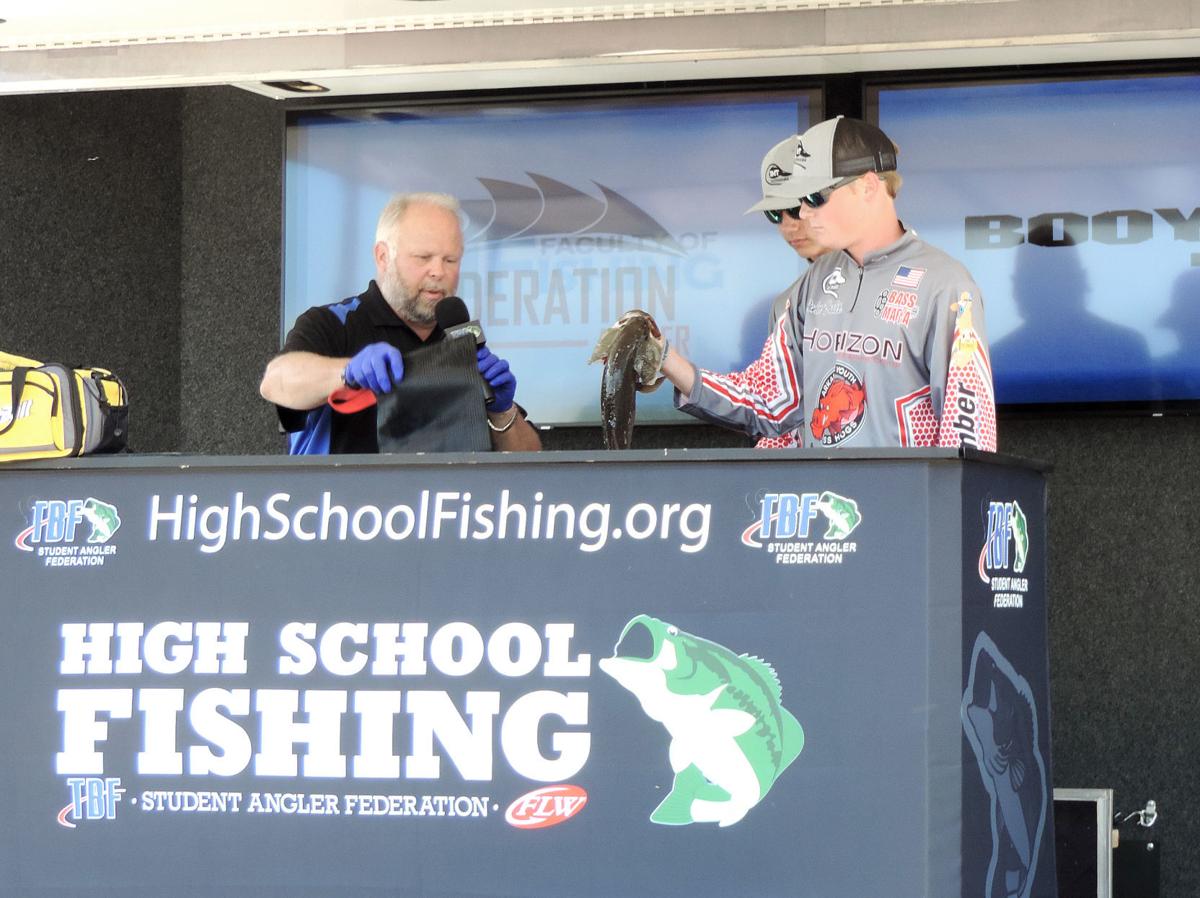 The first day of eliminations at the High School Fishing Championship 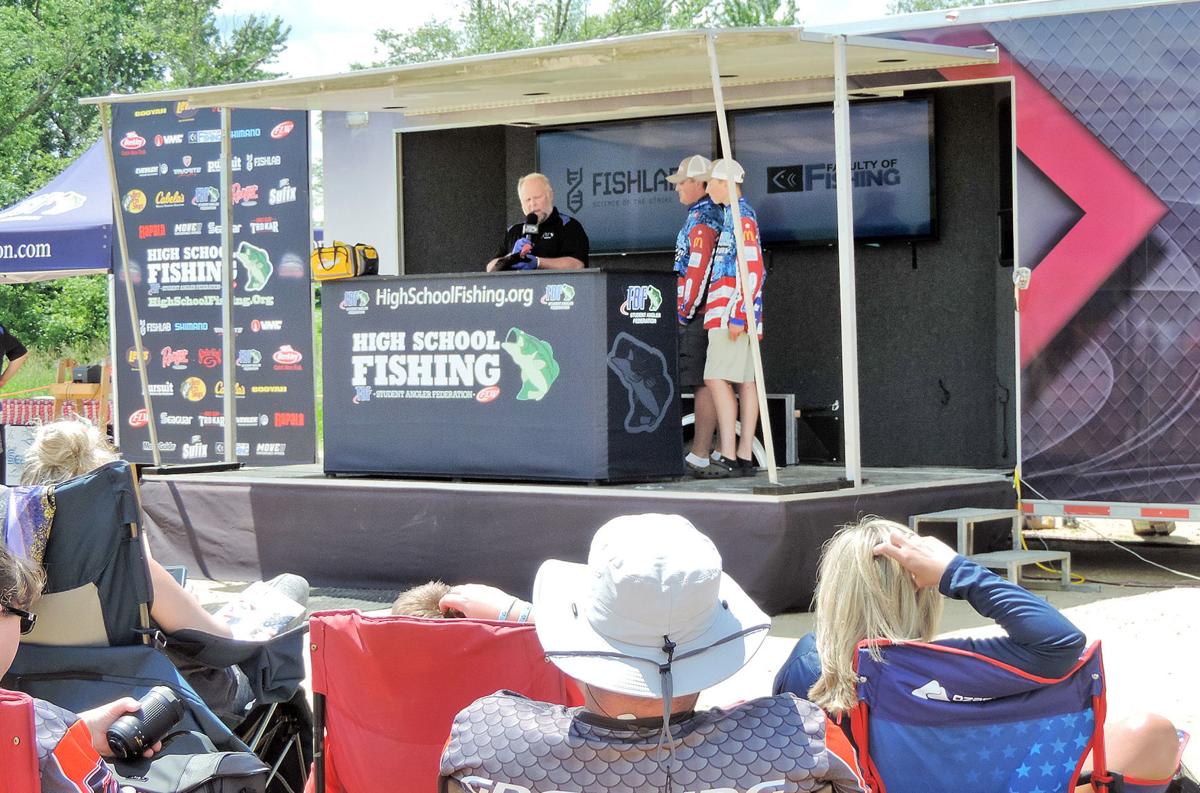 Participants weigh in their catch during the first day of eliminations at the National High School Bass Federation tournament on the Mississippi River near La Crosse.

The first day of eliminations at the High School Fishing Championship

Participants weigh in their catch during the first day of eliminations at the National High School Bass Federation tournament on the Mississippi River near La Crosse.

Young bass fishers from all over the United States have converged on our western border for the 11th annual National High School Bass Federation championship tournament based out of Stoddard on the Mississippi River.

Federation CEO Robert Cartlidge said 312 two-teen student teams from 35 states are competing for more than $3.2 million in scholarships and prizes. No foreign teams are competing in this year’s event due to the coronavirus pandemic, with Wisconsin opening our state to fishing tournament competition again just a few days ago.

Intrastate teams have been competing since Wednesday on this intimidating and complex bass fishery, which has hosted virtually all major bass fishing circuit tourneys the past few years. The two teams from each state weighing in the heaviest cumulative totals compete today to advance to the combined National/World Championship final day Saturday, with 31 teams vying to make this final cut.

Weigh-in to determine the teams that will move forward starts at 1:30 p.m. today, with results posted in real time on the National High School Bass Federation Championship website.

This competition is truly a bright shining light in our otherwise turbulent times. I’ve encountered several teams from Nebraska, South Carolina, Louisiana—and Wisconsin—on the Mississippi River the past several days. All of these youngsters have several traits that tickle this old river rat’s heart:

Every one of them is intense, focused, courteous, polite—and tight-lipped. Tournament rules prohibit the teenage participants or their adult captains from talking about fishing either on or off the water.

That’s no surprise on any of those counts as every one of them has discovered what I believe is truly important in life as their generation is about to take the reins of America’s future. Their eyes are not angry or vacant. Their eyes sparkle with purpose, focused on where to delicately place the next cast instead of entranced by a shiny electronic device.

Structure is key in guiding teens toward productive adulthood. The future of our country will be determined by those who either hold bricks or baitcast reels.

Cartlidge said each two-teen team brings an average cadre of six persons to the greater La Crosse area to stimulate a local economy that is struggling amid the pandemic. The contrast between La Crosse and the horde that descended on Madison over the past week is worth noting.

If you’ve followed this column, you know my disdain for “coliseum” fishing tournaments in which fish can be transported many miles, bouncing in a livewell before being hoisted in front of a crowd in pursuit of glory before being released with a dubious prognosis for survival.

The “Major League Fishing” concept, developed by veteran bass pro Boyd Duckett, in which fish are weighed and released immediately on site approaches the ideal method for minimizing impact on a fish.

Duckett is in the process of making this technology available to bona fide tournaments free of charge. The Achilles heel, according to Cartlidge, is this system involves an app which is vulnerable to hacking.

“This is no small tournament or club event where the ‘golden rule’ of measuring a competitor’s cash and vouching for the results will work,” Cartlidge said. “There are millions of dollars in scholarships and prizes at stake. A weigh-in is the best way to keep competition fair and honest.”

“We teach the kids that a fish should not be out of the water longer than they can hold their breath,” he said. “It only takes a few seconds to put a catch into an aerated livewell. I believe this doesn’t cause any more stress than keeping a fish out of water for photos at several different angles.”

Two aspects of the high school federation format that deserve kudos regardless of your thoughts on fishing tourneys are a daily team bag limit of three fish instead of five and that there is no bonus competition for “big bass.”

America loves a winner, especially one who is graciously humble. From what I’ve seen over the past several days, every one of these kids has the right stuff.

Ted Peck, a certified Merchant Marine captain, is an outdoors columnist for The Gazette. Email him at tedpeck@acegroup.cc