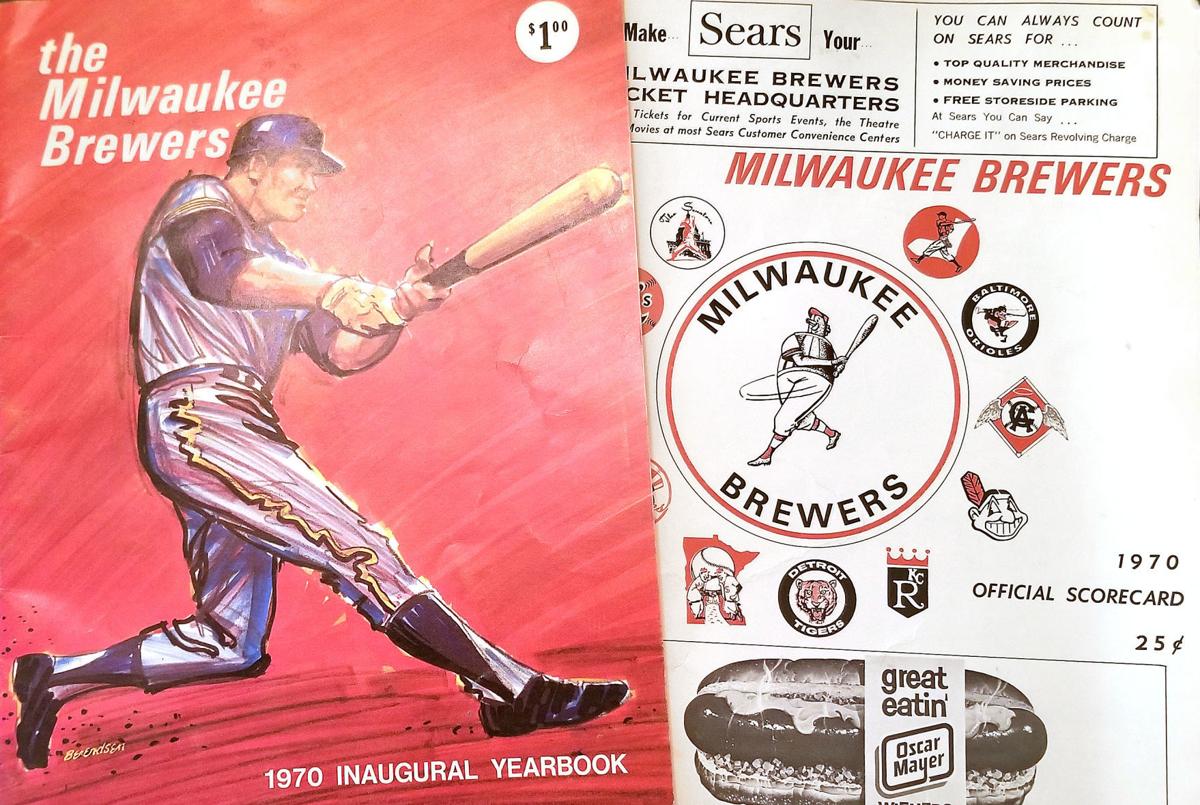 The Milwaukee Brewers yearbook ($1), left, and a scorecard from a May game (25 cents) from the franchise’s inaugural season in 1970. A bankrumptcy court awarded the Seattle franchise to a Milwaukee group headed by Bud Selig just a week before opening day. 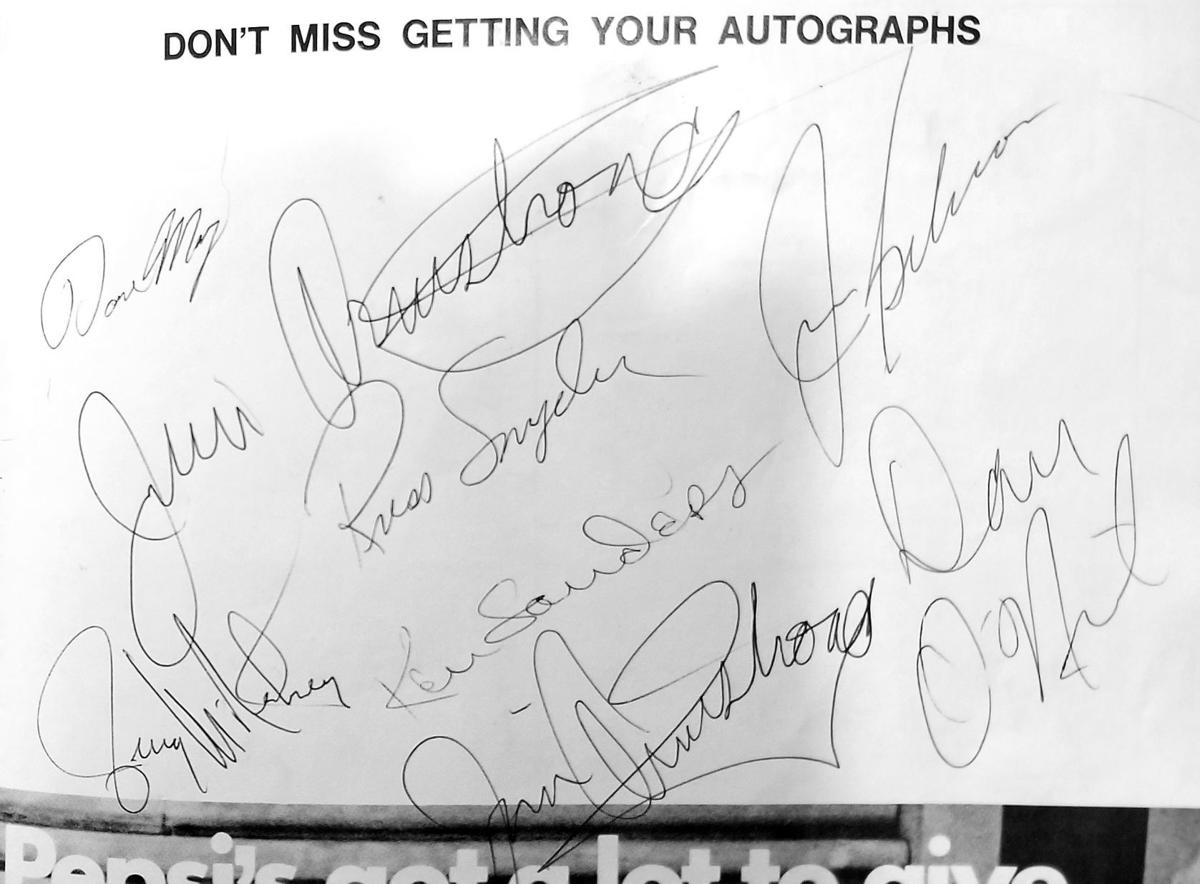 Here's an autograph page that featured signatures from the Dave May, Ken Sanders, Russ Snyder, John Gelnar and Jerry McNerty, and two from the unknown "Jim Armstrong".

The Milwaukee Brewers yearbook ($1), left, and a scorecard from a May game (25 cents) from the franchise’s inaugural season in 1970. A bankrumptcy court awarded the Seattle franchise to a Milwaukee group headed by Bud Selig just a week before opening day.

Here's an autograph page that featured signatures from the Dave May, Ken Sanders, Russ Snyder, John Gelnar and Jerry McNerty, and two from the unknown "Jim Armstrong".

It was 50 years ago, but I can still remember glancing down on the autograph the Milwaukee Brewer had scribbled.

The autograph was one of the last signatures on the blank half-page labeled “Don’t Miss Getting Your Autographs”, which was toward the back of the “1970 Inaugural Yearbook”, which had cost $1.

He had signed “Jim Armstrong.”

I thanked the man and hustled back toward Milwaukee County Stadium, hoping to catch one last player leaving the clubhouse in that late afternoon.

Getting postgame autographs was common back in those days. If you hung around the side-door exit the players came out to get to the parking lot, most of them would sign.

Some stopped and signed until everyone was taken care of, but most signed as they walked to their car.

That yearbook and a corresponding scorecard were tucked way in a white folder I came across a few weeks ago.

They were in one of the several boxes of personal effects I took out of the basement of my parents’ home two years ago.

The Brewers had played the Twins, according to the 25-cent scorecard. I kept score for five innings before I apparently got sidetracked. My dad probably took me to the concession stand.

According to the home schedule in the yearbook the only day games the Brewers played the Twins that season were Saturday, May 16, and Sunday, May 17. My dad had to work in the feed mill he owned on Saturdays, so it must have been May 17, 1970.

Before I get back to “Jim Armstrong”, there are several interesting items in that 1970 yearbook:

The SA “drink milk” ad featured a cow’s head turned in a director’s chair and signed Cecil B. Cow. First off, a cow probably shouldn’t be named Cecil. And, whatever happened to Cecil B. Cow? I know Bessie is still standing here in Janesville, looking over the traffic on Milton Avenue.

Now let us get back to “Jim Armstrong”. You have to remember, 1970 was the first season the Brewers were in Milwaukee. The season before, the franchise was in Seattle and the team was the Pilots.

The Pilots were an expansion team in 1969. The team played in an appropriately named Sicks Stadium, an old minor-league park with a seating capacity of 19,600. The team was awful—pitcher Jim Bouton wrote the first tell-all book “Ball Four” about that 1969 season—and only 677,000 fans came to watch.

After a drawn-out legal battle the entire offseason, the Seattle investors declared bankruptcy March 19—while the team was in spring training. Late in the evening of March 31, the bankruptcy court ruled the franchise could be sold to a Milwaukee group—headed by 35-year-old Alan “Bud” Selig—for $10.8 million. (In 2005, Selig sold the franchise to a group headed by Mark Attanasio for $223 million).

Just seven days later, the Seattle Pilots-turned-Milwaukee Brewers opened the 1970 season at County Stadium before a paid-attendance crowd of 36,107. (The Brewers—most of the players probably still were wondering where they were—lost to the Angels 12-0.)

That brief history is included to set up the autograph portion of the story. On May 17—just a month and a half since Milwaukee got the team—the Brewers were still a bunch of unknowns in their home city. There was no ESPN, FOX Sports Wisconsin or Brewers.com to get acquainted with the players.

So as a 13-year-old running up to guys coming out of the clubhouse exit, I didn’t have a clue who they were; or if 10 minutes earlier, I had been in a group and already had their autograph.

All I know is when I chased down that solitary guy who was walking in the lot, he signed “Jim Armstrong”.

And when I finally climbed into the family car for the drive back to Ripon, I read off the names to my dad of the players that autographed my yearbook.

Dave May, who was a solid outfielder. Jim Armstrong, didn’t know him. Russ Snyder, an outfielder. Jerry McNertney, a veteran catcher, who wrote “Jerry” with the bottom loop of the “J” backward.

There also was John Gelnar’s signature. He was a pitcher.

Then there was Dan O’Neil, the radio and television coordinator. I said, I didn’t recognize any of these guys.

And then, AGAIN, there was Jim Armstrong. A signature expert could point out all sorts of differences between the two signatures, with both ending with a scribbled loop from the last “g” going through “Armstrong.”

A page-by-page search of 38-page yearbook didn’t come up with a Jim Armstrong.

When I ran across that yearbook page a couple of weeks ago, memories of that day flashed back for the first time in 50 years. For reasons I don’t know—it had to be from going back and looking at the players’ black-and-white photos in the yearbook—I remember thinking at the time that “Jim Armstrong” was either Marty Pattin or Lew Krausse, who were pitchers.

Both Pattin and Krausse have died, so I’ll never know.

Maybe whoever did it was miserable being in Milwaukee and just signed a different name after each game. Maybe he was sick of signing autographs for pesky kids as they were walking to his car. Or maybe he thought it was funny to sign a fictional name.

In a way, it is. It became a topic for a newspaper column 50 years later.

Take care, Jim Armstrong, whomever and wherever you are.