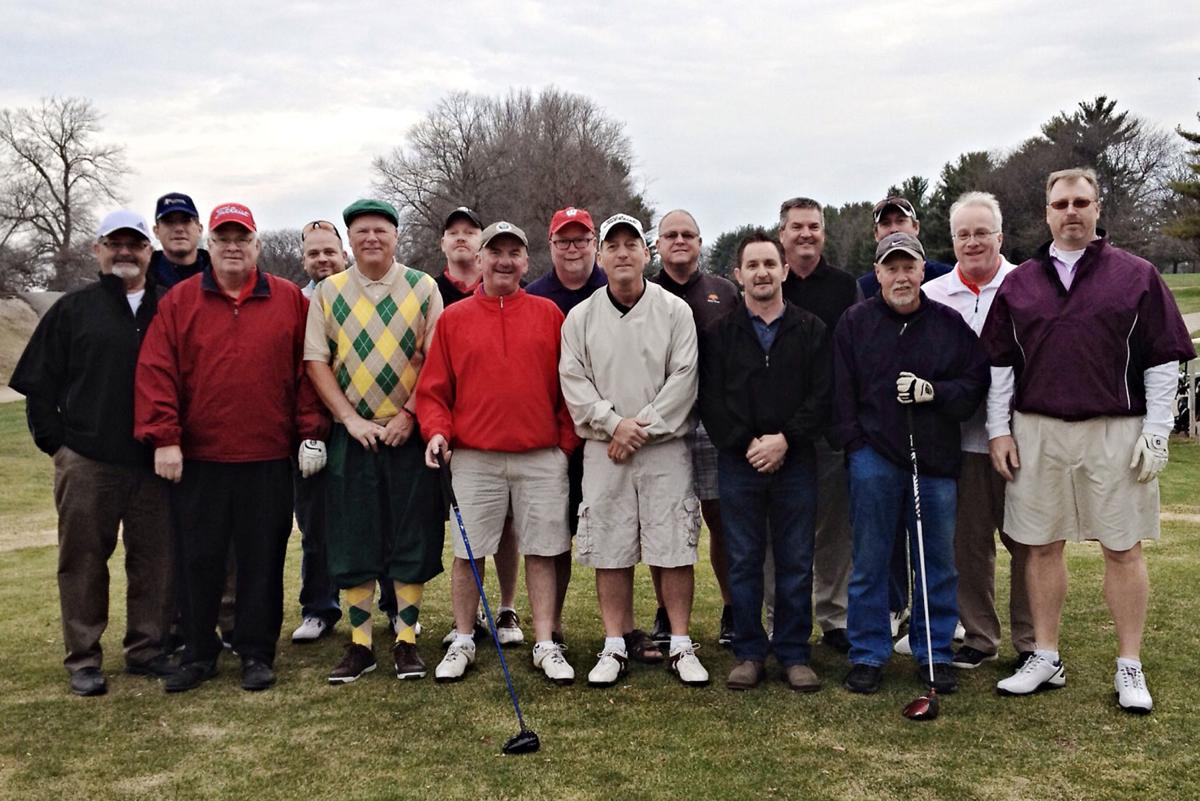 The 2014 version of the ‘Sunday 16.’ On the far left in the white hat is Tim Terry, the brainchild behind the group, which has been playing every Sunday for 30 years. 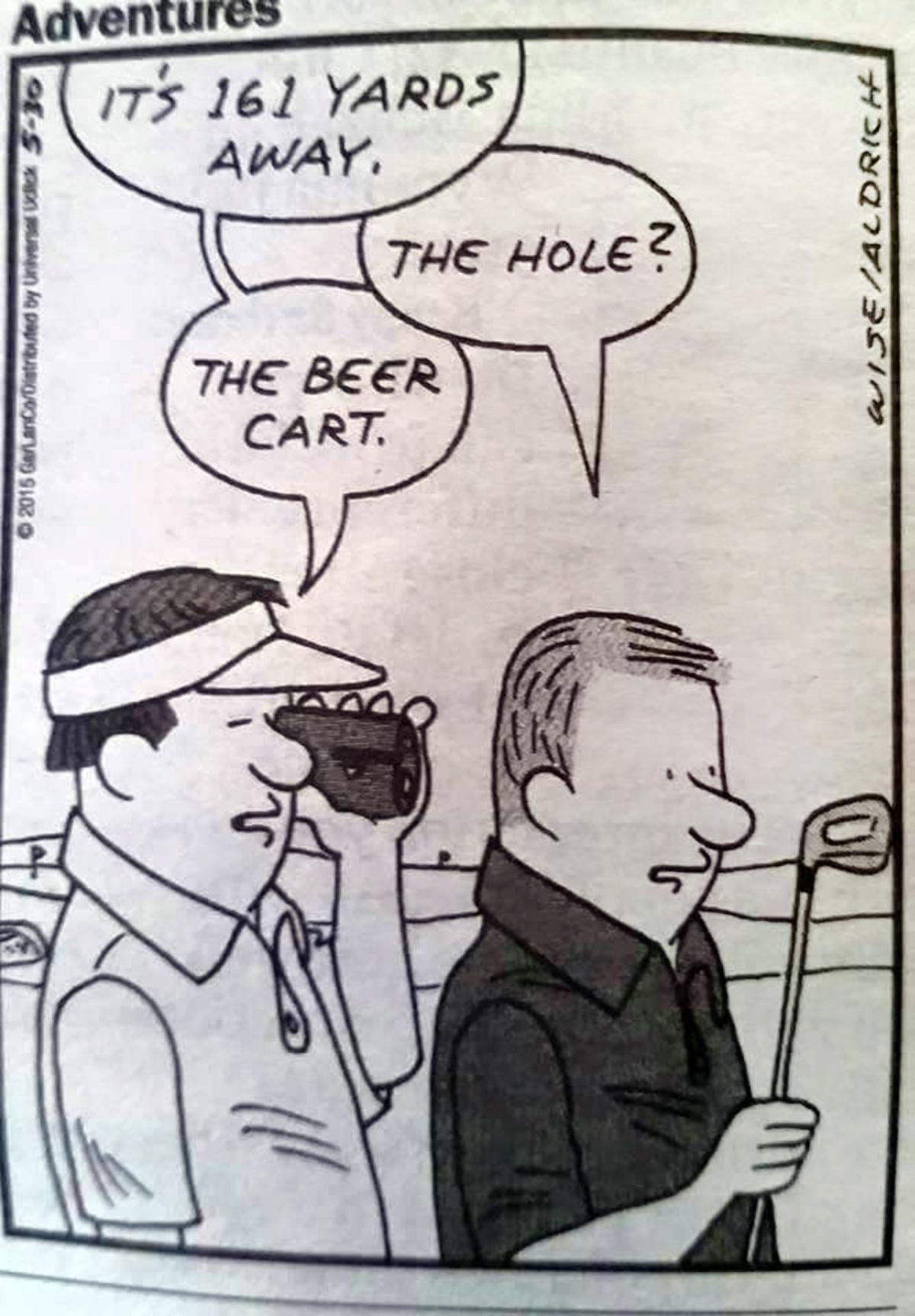 A longtime cartoon favorite for the Sunday 16. 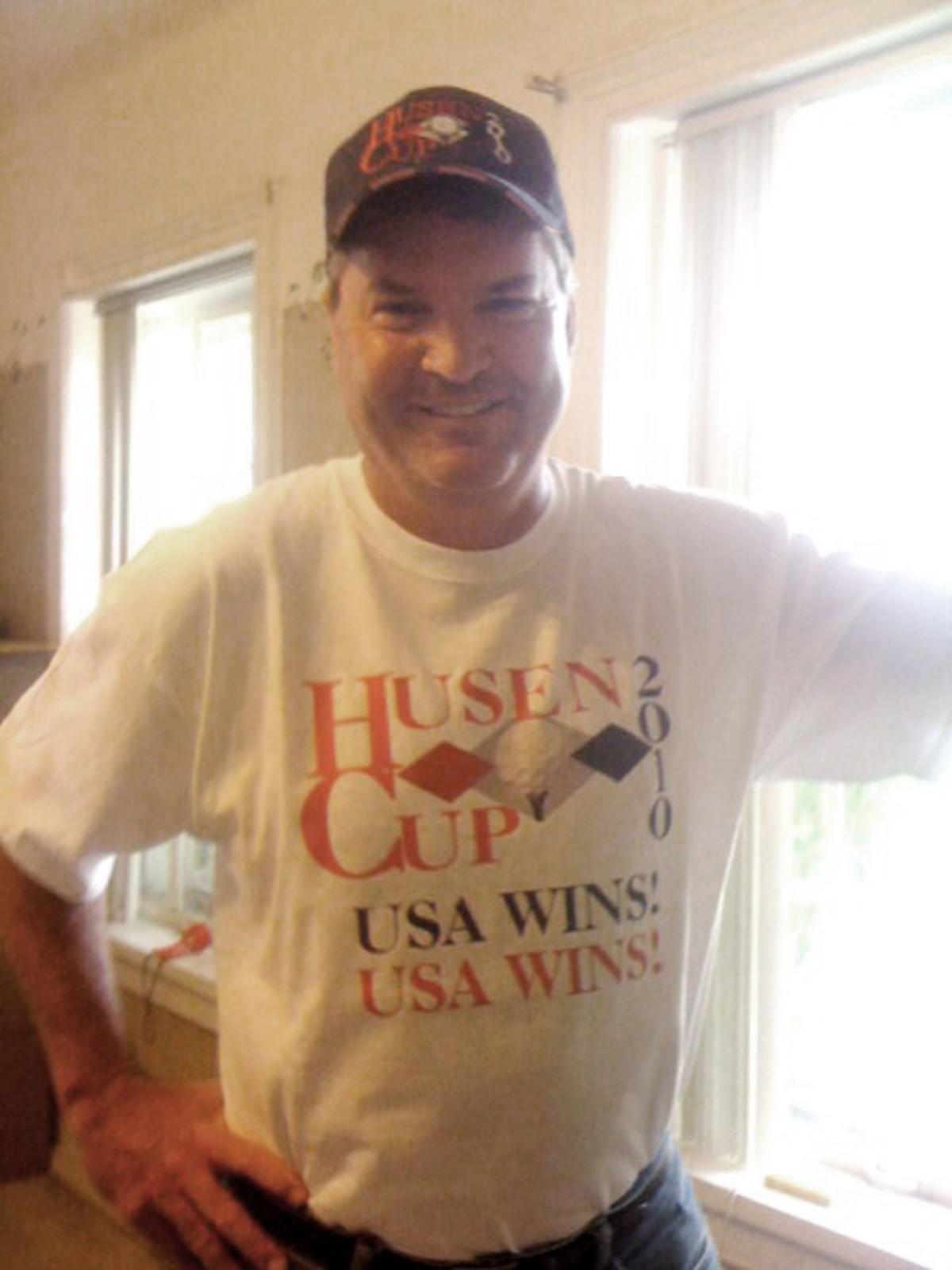 The 2014 version of the ‘Sunday 16.’ On the far left in the white hat is Tim Terry, the brainchild behind the group, which has been playing every Sunday for 30 years.

A longtime cartoon favorite for the Sunday 16.

JANESVILLE—Thirty years. Hundreds of “Sunday Fundays.” Four permanent tee times and a lifetime of memories forged on the fairways

A tradition unlike any other.

And as of this morning, that tradition continues.

Tim Terry’s brainchild has come full circle. What started out as a dream has become reality.

Sixteen golf enthusiasts, including three brothers and other friends since high school, get together every Sunday morning—weather permitting—to play 18 holes at Janesville’s Riverside Golf Course, followed by whatever shenanigans may occur at a local watering hole.

“There are no official records, but as with a lot of things in life, it has evolved into a group of close-knit friends with one goal: having fun playing the most frustrating, yet rewarding, game ever created,” Terry said. “A history of 6:30 a.m. Sunday tee times followed by too many laughs and drinks while paying off bets and collecting fines at a local establishment.

“How has it lasted this long? Thick skin and truly nice people. Members have changed over the years, but I believe there are 12 of the original 16 still playing.”

Terry, his father, Ken, and lifelong friends Don Murphy and Jim Buscemi made up the first foursome. That number quickly grew to 16. Incoming recruits realized golf was their ticket out of the house on Sunday mornings. And if the Brewers or Packers were playing a noon game, that added an additional three-hour bonus to the getaway.

“It was easy to say yes as you could see how much fun this group was having—on and off the course,” Jerry Rabbach said. “The group grew to 16 guys (with several others that rotate in and out throughout the years), friends on and off the course, ages ranging from 35 to 55 when we all first got together. Now, most are in the 50s and 60s and handicaps have risen, but the behavior hasn’t changed much.

“It started out as eight friends: Brian (Cherry) the cook; John (Husen) the plumber; Tim, Rob and Curt (Terry), all three brothers; and a few others, back in 1990. Sunday morning golf was the way of life, April through the first snow fall in southern Wisconsin.”

Stories write themselves for the Sunday 16. Some are for print, others they will take to their graves.

The group’s infamous “Kangaroo Court” has probably collected enough in fines over the years to finance a no-holds-barred after-the-virus party.

Bags left at the course, sleeping overnight in a local park and cars not being found until the next day were not fine-worthy but certainly have added to the mystique of the Sunday 16.

The makeup of the group is all-encompassing. From a plumber to a lawyer, to a chef and a travel agent, to several who are now retired, the diversity of the group has been the one constant. Politics have been the root of more than one argument, along with proper dress code and who’s turn it is to buy the next round. Today’s round almost surely centered around, “What in the world did the Packers do in the NFL Draft?”

Stories abound with the Sunday 16, but several stand out.

One Sunday someone showed up on the No. 1 tee box with his golf shirt on inside out. The 15 others stood next to him on the tee, and no one said anything to him until hole 15.

Another time, one of the members, who had undergone hip replacement surgery on both hips, waddled down the fairway trying to track down his runaway electric cart. Cart 1, Member 0.

The “Keystone Moment” also is worth mentioning. The entire group watched as one member tried to break into his van, because he thought he had lost or locked his keys in the vehicle. After an hour of failing miserably to break into his own vehicle, said member was informed that his golf bag was actually still at the clubhouse with his keys safely tucked away in the bag.

“Together we have experienced kids, grandkids, graduations, weddings, divorces and celebrated lives of friends no longer with us,” member Gary Dulin said.

“Sundays, we will meet for four hours at Riverside to solve the world’s many problems and laugh. Laugh a lot. This Sunday we will be doing it from six feet away—not much different than any other round of golf over the last 35-plus years.”

The Sunday 16 caps off each golf season with the Husen Cup—named after member John Husen. Money collected from year-long fines pays for the three-day extravaganza that is played in Ryder Cup style. Brand new golf shirts are also purchased for each country’s representatives to wear proudly. Winners drink from the Husen Cup as Springsteen’s “Born In The USA” or Lee Greenwood’s “God Bless The USA” blares from a jukebox if the American team wins, while Queen’s “We Are The Champions” is the song of choice for the European team. Team captains are also selected for the next year’s Husen Cup.

With indoor golf being the latest craze, many of the Sunday 16 continue to get together and play over the winter at Riley’s On The Green in downtown Janesville.

The group also gets together yearly for a Christmas party that includes the annual exchange of white elephant gifts.

The global pandemic might have cost the group a couple rounds of golf this year.

But with three decades of tradition already in the books, there is no stopping the Sunday 16.