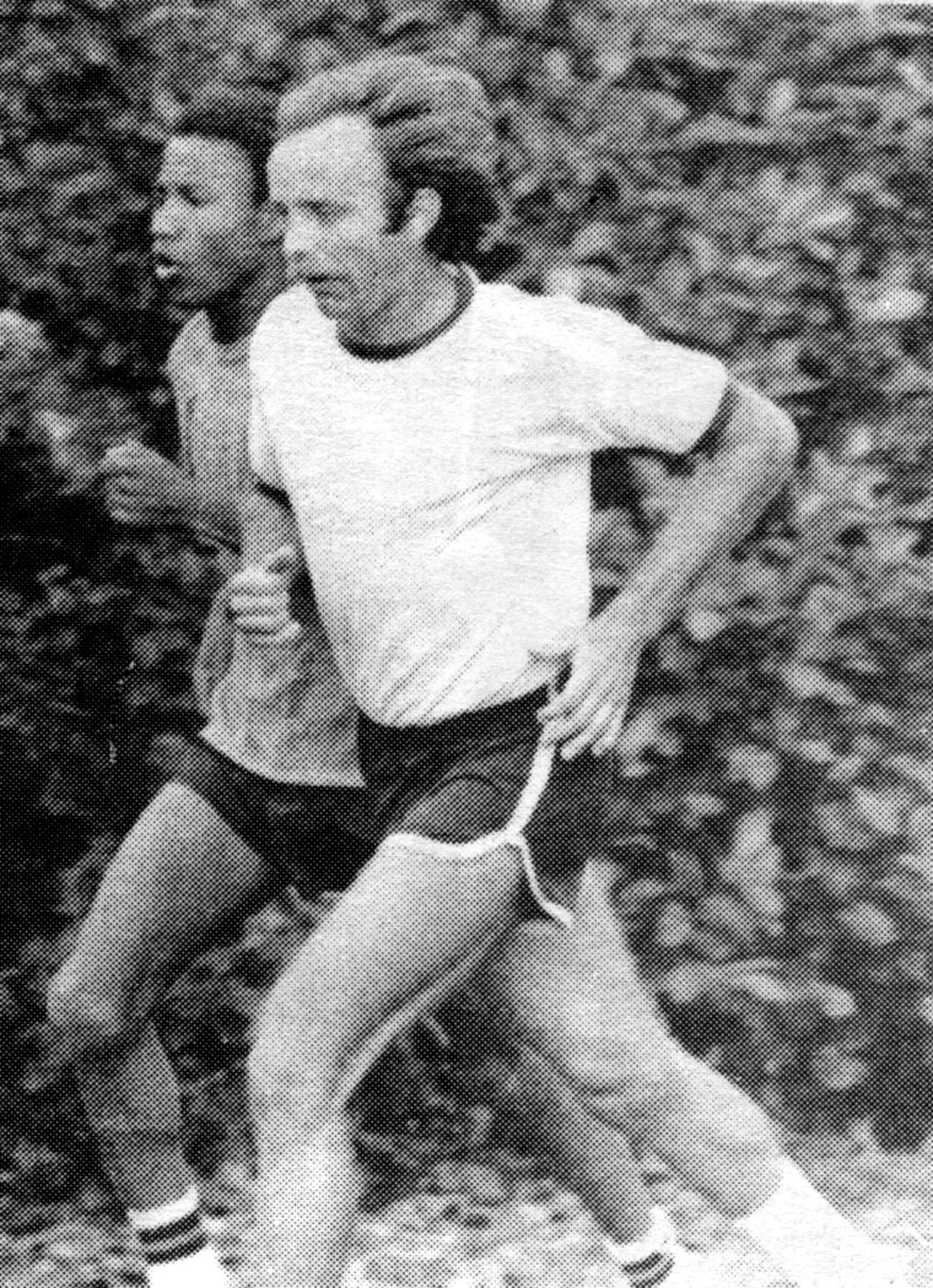 John Sonka, right, runs as a sighted guide for a visually impaired runner during his days as a coach and teacher at the Wisconsin School for the Visually Handicapped. 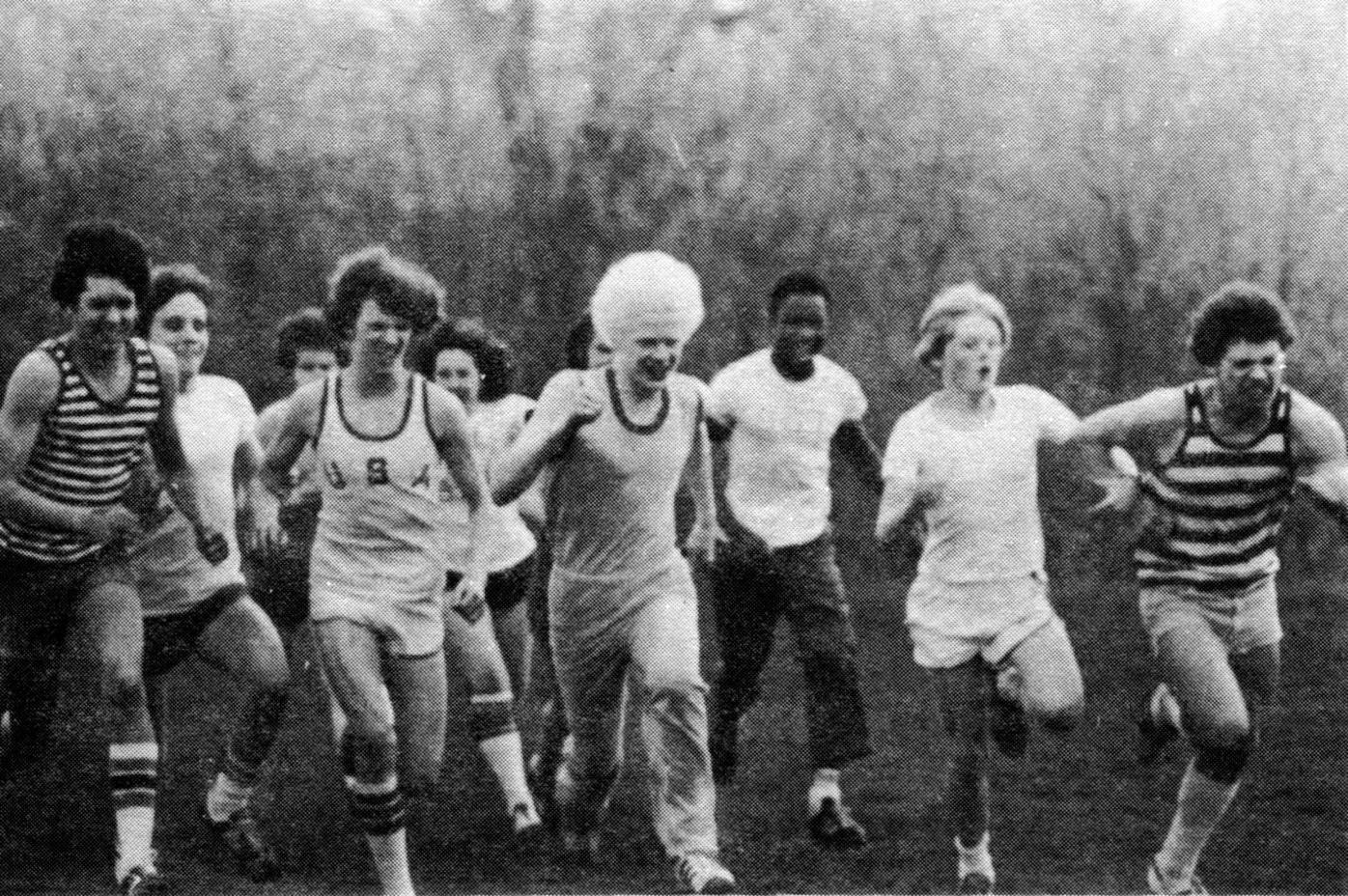 Runners compete in a cross country meet in the late 1970s. At right, a pair of runners can be seen linked together. When running sighted guide, a blind runner loosely holds on to a guide’s elbow. The blind runner sets the pace, but the guide acts as the ‘eyes’ to help avoid obstacles.

John Sonka, right, runs as a sighted guide for a visually impaired runner during his days as a coach and teacher at the Wisconsin School for the Visually Handicapped.

Runners compete in a cross country meet in the late 1970s. At right, a pair of runners can be seen linked together. When running sighted guide, a blind runner loosely holds on to a guide’s elbow. The blind runner sets the pace, but the guide acts as the ‘eyes’ to help avoid obstacles.

Life is full of uncertain paths.

Depending on choices that are made, those paths can bring joy or sadness to a person’s life. Over a 45-year span, I embarked on uncertain paths in my life that made me stronger, appreciative of the support along the way and reflective of how important we are in each others’ lives.

When I was in middle school and headed down an uncertain path that may have turned out bad, Coach Vrbicek at Wilson Junior High School in Cedar Rapids, Iowa, talked to me about joining the cross country team and using my running skills for something positive.

I did. And that led me to keep running at Jefferson High School in Cedar Rapids and then in college at the University of Northern Iowa on the cross country teams.

When I ran, I felt challenged but content and knew that running could be a way for others to experience the euphoria and maybe for a little while forget any problems or frustrations that they had.

While in college, I was drafted into the U.S. Army and stationed at Valley Forge Hospital near Philadelphia. My assignment was to work in rehabilitation for the soldiers returning from Vietnam. Part of our therapy for soldiers who had returned blinded was to take them out for a run.

Another rehab specialist who had run at Rutgers and I were given the responsibility to run sighted guide for the blind GIs. Little did he and I know the impact it would have on their self-confidence in regaining pride in who they were.

In running sighted guide, the blind runner loosely holds on to the guide’s elbow, but the running is on the pace of the blind person. The guide is simply acting as the “eyes” to make sure no obstacle will impair the blind runner. A lot of verbal interaction takes place.

Having this experience in the U.S. Army served me well when I accepted a position at the Wisconsin School for the Visually Handicapped (WSVH) in Janesville as the physical education teacher and coach.

The Department of Public Instruction had hired Bill English, a well-respected man from the Virginia School for the Deaf and the Blind, to be the new superintendent.

We were always looking for opportunities to enhance the educational and personal experiences of our students just as all public schools were doing. And so, the experience began for many girls and boys to run cross country.

I had known from my own early years and my time with the soldiers the positive impact that running had on an individual. I knew that my students at WSVH would also experience that impact as they learned to run on a team.

The boys at WSVH bought into running cross country and were so good with the ability that they had.

Title IX came to our nation in 1972. By 1976, we had two young women who felt that not only they but the other girls at WSVH should be afforded the same rights as other girls in the United States. They wanted to know why they couldn’t do cross country just like the boys.

I told Helen and Mary they should ask Bill English why they couldn’t participate in cross country and all other athletics at WSVH. Bill said that they absolutely could. We could have a girls program in all the same sports that the boys do. And yes, our girls,wrestled in the late 70s and early 80s with sighted boys.

As fate would have it, WSVH had several young women who were great athletes in their own right and willing to run cross country. In the first two years of competition, we had more girls running cross country than Craig High School.

Of course, Craig had the No. 1 girl in the state, Jody Rittenhouse, but lacked a full team of five runners. We beat Brodhead, East Troy, and Parker. That probably was the shining moment for our girls to beat a large school. The years following, it did not happen again.

Another confusion for public school coaches was the rule that cross country runners could not hold hands or impede another runner from passing. At the beginning of this adventure, the meets were very confusing for those coaches in southcentral Wisconsin. Objections were raised to the WIAA about this lack of following that rule.

Fortunately, at the time of these objections, I was the vice president of the Wisconsin Cross Country Coaches Association. Tom Sisulak of Madison La Follette and all of the members of the association at that time were on board to change this rule so the blind could run.

The WIAA approached the national federation of high school athletics to have them change the rules so blind runners could have contact with their guide. It passed.

All of this was possible because of the tremendous support from other public school cross country coaches in southcentral Wisconsin. Coaches Greer and Rogers from Clinton, Coach Turner from Beloit Turner, Coach Peterson from Brodhead, Coach Wirth from Edgerton, Coach Carol Luther from Parker and Coach Jim Smith from Craig were all willing to compete against our WSVH runners in meets.

One of the challenges we had early on was to find sighted guide for our runners.

There were many willing runners at that time with the Rock Runners Running Club that were willing to do that. The problem was most of them had to work until 4 or 5 p.m. If the meet was away from Janesville, we had a problem.

Over the years, some of our staff were most gracious to be sighted guides. Several citizens who really helped our runners were Mike Scott, Donald Tucker, Paul Schumacher, and Roger LeClaire. When we first asked them if they would do that, they had no idea what they were getting themselves into. But boy did they step up in a big way.

In high school cross country, the ultimate goal is to make it to the state meet. In all sports, there are highs and lows.

We had one girl who finished seventh at the sectional at Wisconsin Heights. She missed it by one place.

We had one boy who I thought was going to be the first runner from WSVH to go to the state meet. Chris had times that were worthy of any large school team member. He later ran track at UW-Whitewater. I think I got ahead of myself going into the sectional meet, where I felt Chris would be an automatic to get to state because of his times compared with other runners.

Mike Scott was working with me that day in Sauk Prairie, and our plan was that I would be the sighted guide for Chris at the beginning of the race, and Mike, being a much better runner than I, would finish the second half. Chris had a visual impairment known as retinitis pigmentosa. At night or in a very dark, shaded environment, he was totally blind.

The day was overcast, rain was forecast, and I was not thinking clearly. The first 100 to 150 meters of the race would be crowded and would funnel into a grove of trees. Rain clouds appeared and made conditions dark in the trees. I was to meet Chris coming out of the grove of trees and help guide him to where Mike would finish the race. I waited on the other side of the grove for Chris. The pack of runners came out, and I did not see Chris. Panic. I ran back into the grove and found Chris trying to find his way out. Lost. It was so dark that he couldn’t see his way. The low moment in my coaching career.

After coaching at WSVH for 30 years, I was given a blessed opportunity to coach the Craig cross country team in 1998. I was able to finish my cross country coaching career on such an exhilarating experience.

In my second year, Craig had an outstanding runner in Kelly Cunningham who qualified for the state meet. Where some coaches take for granted going to the state meet every year, this coach was beyond excited that I was finally there with an athlete I had coached. Kelly and some of her teammates went to Wisconsin Rapids. Her teammates were there to to support her and warm up with her on the course.

The emotions that came over me when I stepped on the state championship course with an athlete were overpowering. Each year after that, I was blessed to be at Wisconsin Rapids with runners I coached. I continued to coach at Craig High School until 2002.

Since that year, I have continued to be inspired by the young cross country runners I have seen as I continue to attend meets.

The Midwest Invitational meet at the Blackhawk Golf Course in late September is the oldest interstate meet in the nation, and it is a real joy to see the hundreds of brightly colored uniforms of the high school students as they race around the course. I am inspired as I watch the grit and determination on each runner’s face and the sheer exhaustion at the end of the race knowing that each of them have given it their all no matter their times or what place they finish.

Uncertain paths are part of life. It is good to know that so many girls and boys, both sighted and blind, have accepted the challenge and have grown from the experience that running cross country provided them. I am so honored that I was a part of that growth.

Today, in our uncertain times and the uncertain path we are on, we must surely grow from our experiences.

John Sonka is a Janesville resident and retired educator and coach. He submitted this story as part of a series of stories The Gazette is running regarding inspirational sports memories during a time of sports uncertainty. To submit an article or a story idea, email sports@gazettextra.com.