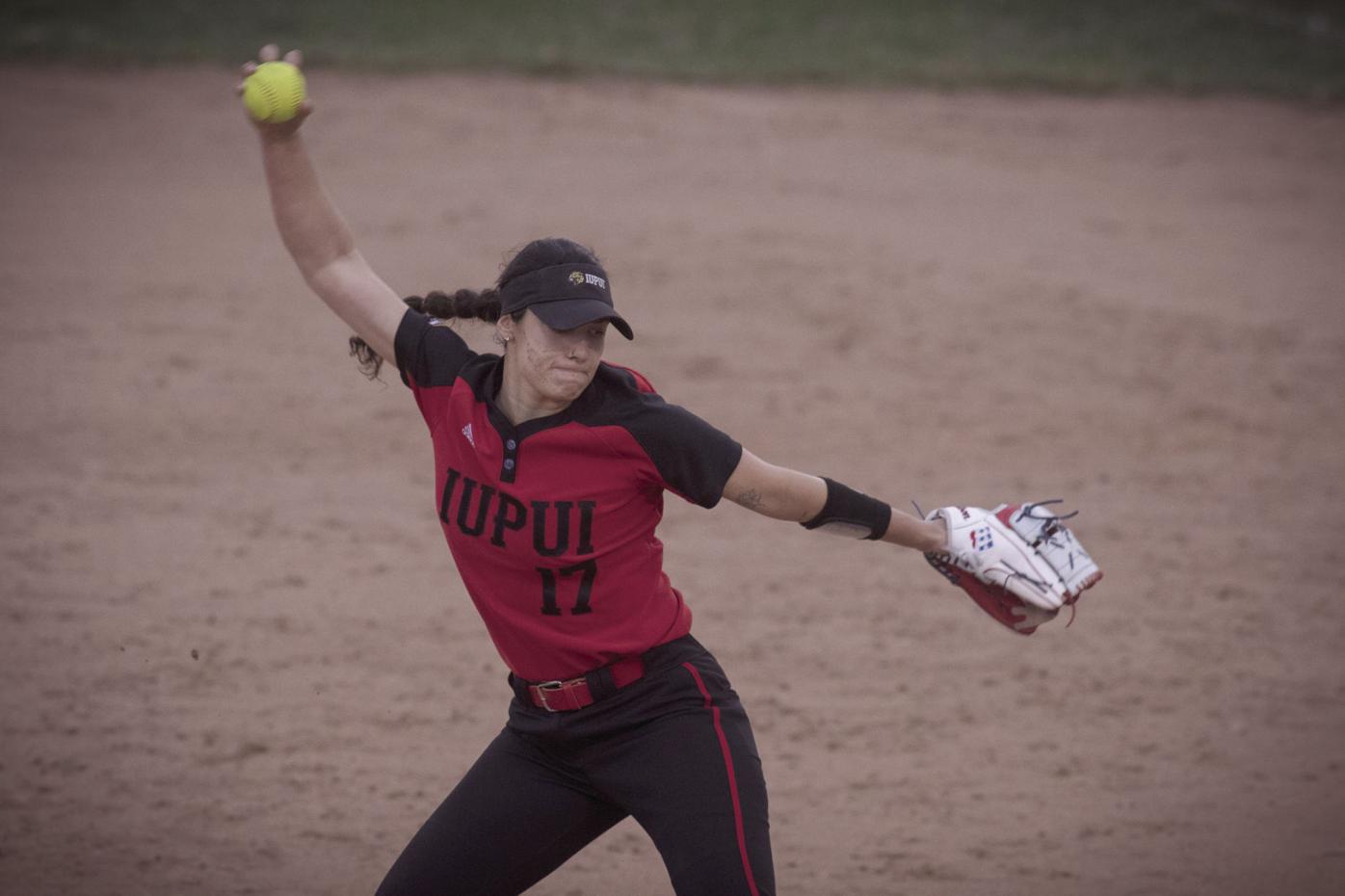 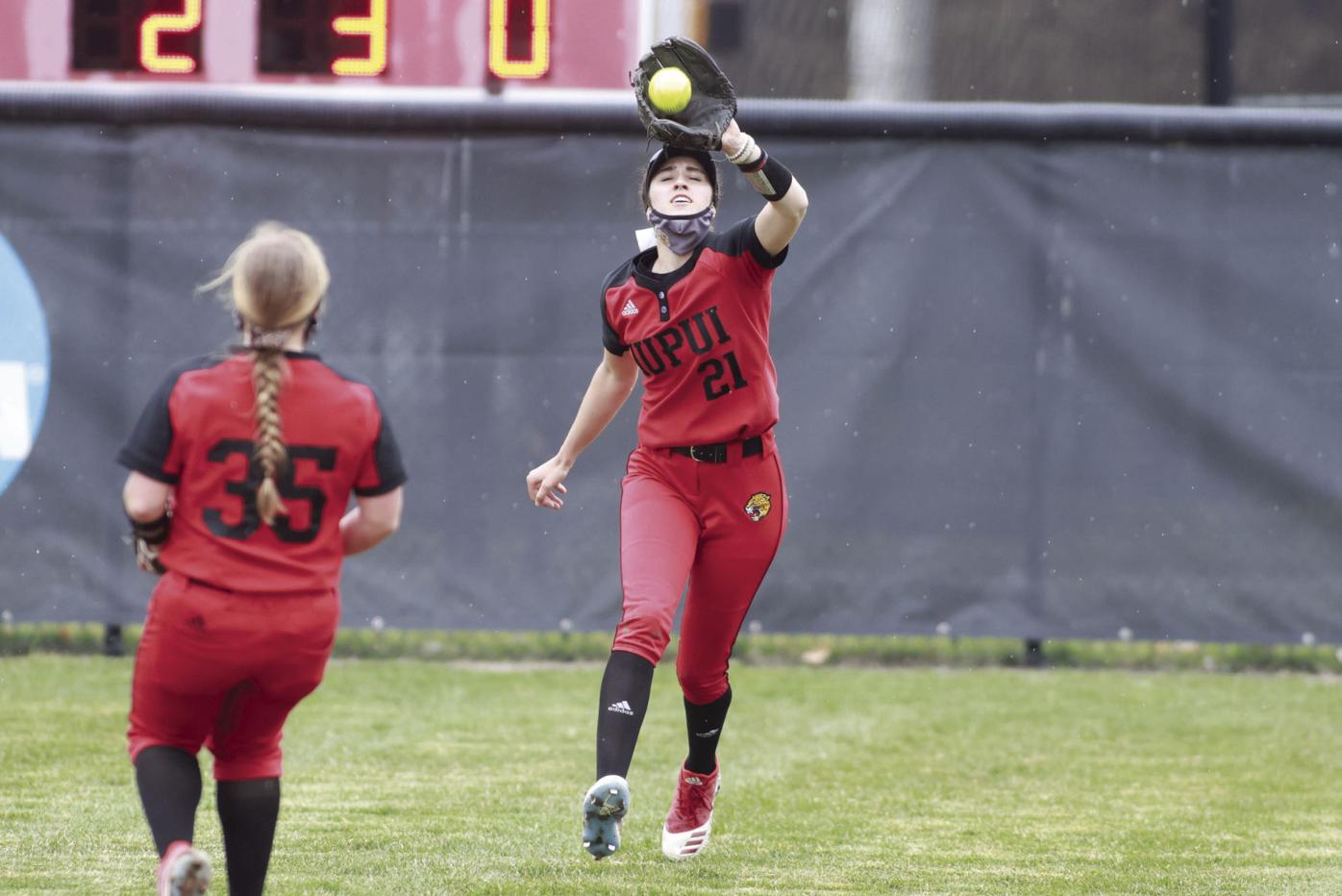 IUPUI junior center fielder Jaida Speth runs up to make a catch. Speth is in her third year as a starter for IUPUI but is playing on the same team as both her sisters, Jennah and Jasmin, for the first time ever. 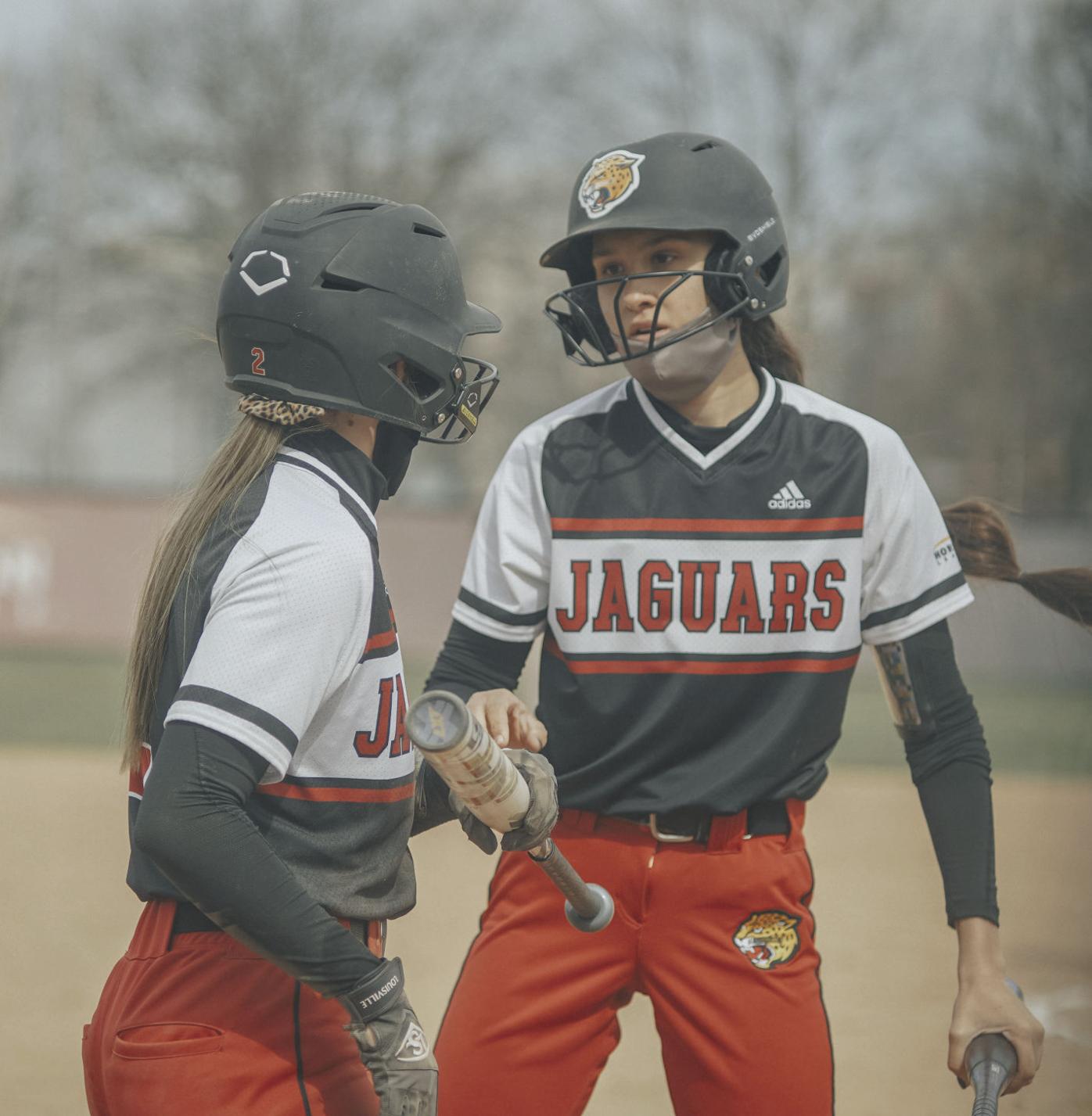 IUPUI freshman Jasmin Speth, right, talks with a teammate during a game this season. Speth, the youngest of three sisters who graduated from Delavan-Darien High, is playing on the same team as both her older siblings—Jennah and Jasmin—for the first time in their lives.

IUPUI junior center fielder Jaida Speth runs up to make a catch. Speth is in her third year as a starter for IUPUI but is playing on the same team as both her sisters, Jennah and Jasmin, for the first time ever.

IUPUI freshman Jasmin Speth, right, talks with a teammate during a game this season. Speth, the youngest of three sisters who graduated from Delavan-Darien High, is playing on the same team as both her older siblings—Jennah and Jasmin—for the first time in their lives.

Jennah Speth did not know she was an out away from perfection. She said her sister, Jaida, later told her that she was simply thinking if the ball was hit her way, she better not mess up.

Sure enough, when Jennah released her final pitch in the second game of a doubleheader March 20 against Cleveland State, the ball was hit to center field, where Jaida was waiting to make the final out.

“My coach came out and was yelling in my face, and I was just like, ‘Why are you yelling at me?’” Jennah Speth said. “I guess Jaida knew, though, because my mom sent us the video of the end, and Jaida after she caught it was jumping up and down.”

It was the first perfect game for an IUPUI pitcher in 20 years. And it was the perfect early-season highlight during a season for the family like no other.

The Speth sisters—Jennah, Jaida and youngest sister Jasmin, who all graduated from Delavan-Darien High—are finally getting an opportunity to all play on the same team for the first time ever.

Jaida is in her third year at IUPUI and has been a starter all three years. Jasmin, a freshman, signed on to join her during her senior year at Delavan-Darien last year.

When COVID-19 hit and put a halt to sports, Jennah began sorting out her options. She had already been petitioning the NCAA for a fifth year of eligibility after injuries limited her time at the University of Illinois-Chicago. The NCAA later ruled athletes would retain a year of eligibility because of the pandemic, so Jennah entered the transfer portal and began applying to graduate schools.

One of those schools was IUPUI.

Because of the age difference between Jennah and Jasmin, the two were never able to play on the same team, though Jaida spent time playing alongside both her older and younger sister.

When Jennah finalized her decision to transfer to IUPUI, it meant the three sisters would all be on the same field together.

“It’s been fun; I feel like we are vibing very well,” Jennah said. “We have a few tiffs at home, but I feel like all being together and being able to finish out my career with them is very, very cool.”

Jennah and Jaida have both started all 19 games for the Jaguars. Jennah has started nine games in the circle and is 4-5 with a 3.21 ERA and 46 strikeouts in 52 1/3 innings. The two older sisters have combined for 23 hits, 13 runs scored and 13 driven in.

Jasmin has appeared in seven games, starting two of them.

When the three sisters leave the diamond, they head home to their four-bedroom house. The dwelling got a little more crowded this past week when the sisters—longtime animal lovers—rescued a pair of stray dogs.

And the house is often even more crowded on weekends with home games.

“My mom claimed the spare room as her room,” Jennah said with a laugh. “My parents have been here for almost every game. My mom, in the fall, was down here like every other weekend.

“My mom said they were both tearing up when they were at our first game and all three of us were on the field at the same time.”

The only games Marty and Maria missed? The series at Cleveland State, including the perfect game, because they were told visiting team parents were not allowed to attend due to pandemic protocols.

Jennah and Jaida find themselves leaders on a young team that includes 10 true freshman. With about six weeks left in their season, they hope the Jaguars’ best is yet to come.

“We’re hoping to make the (Horizon League) tournament,” Jennah said. “They only take the top four, and I think right now we’re tied for sixth based on win percentage.”

IUPUI had a pair of doubleheaders this past weekend at Detroit Mercy canceled, and it does not play again until Friday at home against Youngstown State.

That should give the Speth sisters plenty of time to help their new pups get acquainted with the house.

Indeed. The perfect find shortly after a perfect game for a trio of softball-playing sisters taking advantage of the perfect situation to play together.