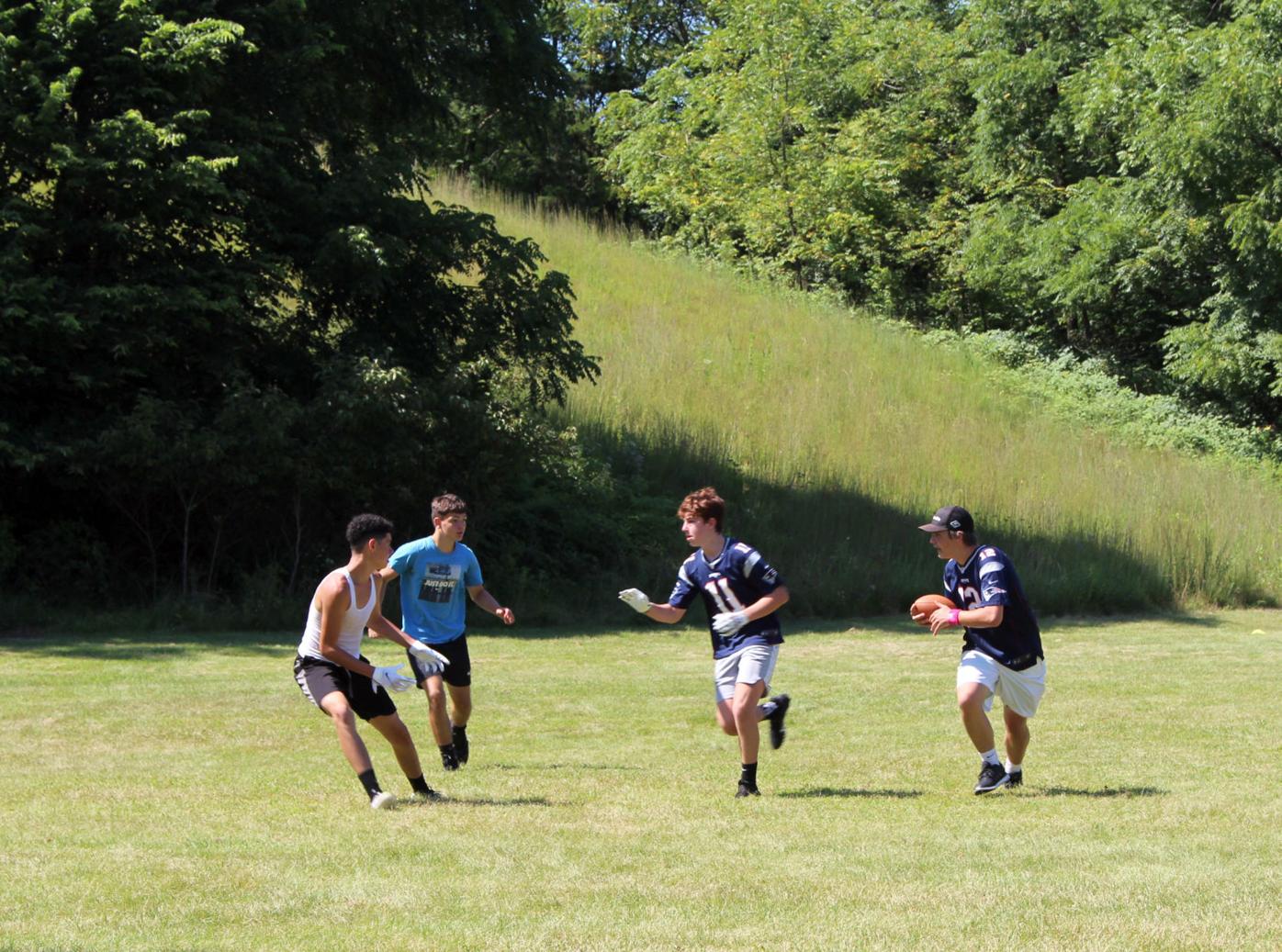 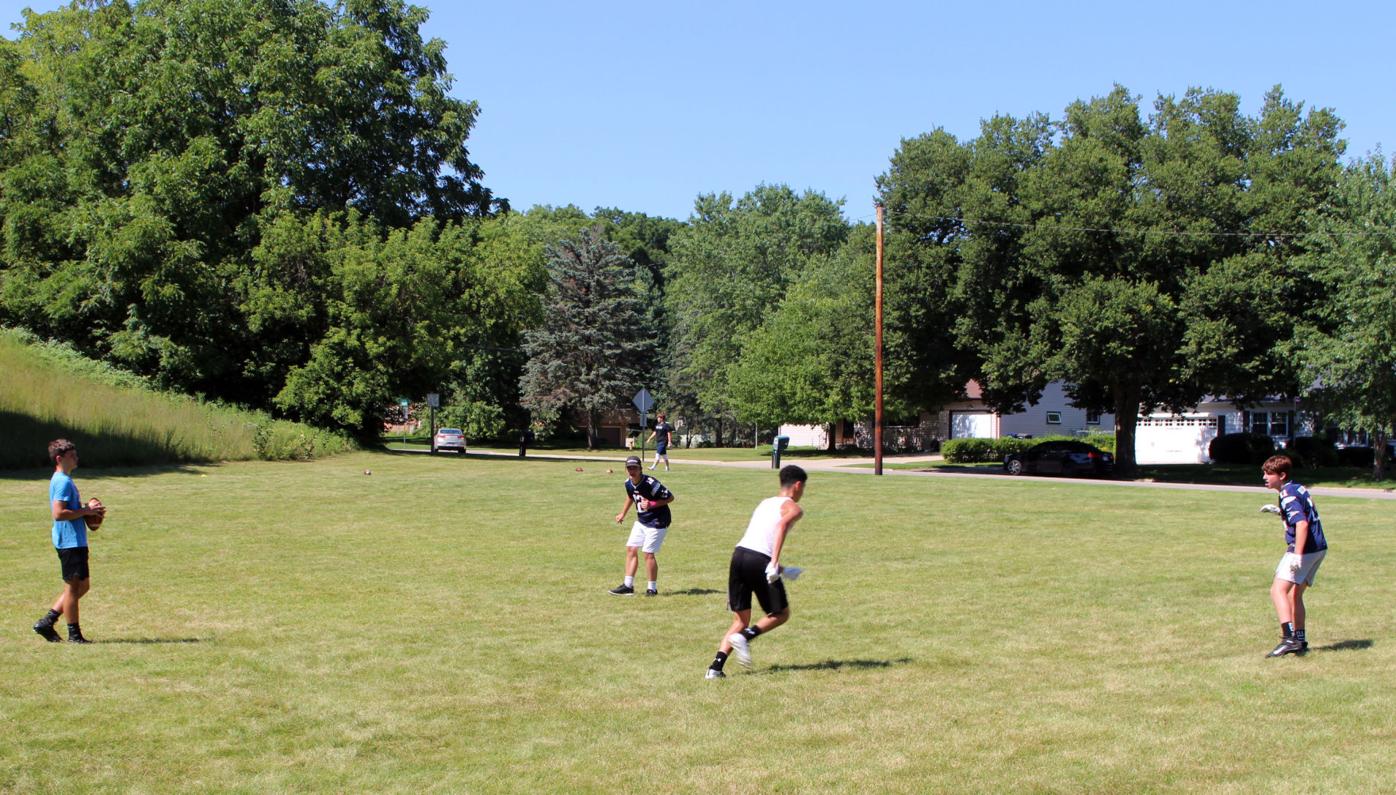 Marshall Frost broke from the line of scrimmage and faked a quick out route, planted his foot as if to break back to the middle of the field and then quickly changed directions one more time.

He caught a pass from Cal Conway, tip-toed the out-of-bounds line just shy of a sledding hill and stretched his arms across the goal line for a touchdown.

The Janesville School District announced Friday that it has postponed all fall high school sports, including football, to an abbreviated season scheduled to be held next spring amidst the COVID-19 pandemic. That means the only snaps Conway, Frost and about 10 other friends will see during the rest of 2020 will come in the final weeks of their neighborhood 2-on-2 league.

“We’re all having a great time,” said Conway, who organized the league that plays Mondays and Fridays at Blackhawk Meadows Park near Palmer Park in Janesville. “Teams are looking forward to the playoffs. It’s fun. It’s cool to scheme plays. And we even film the games and have some film studies and that kind of stuff.”

Conway said the leagues has been in the works over the past few summers. He and his friends had attempted to put together a 5-on-5 league, but getting 10 kids all on the same page when trying to schedule a game time proved difficult.

With the pandemic keeping most everyone cooped up early this summer, schedules were much more wide-open and the group was itching for something to do.

So Conway went back to the drawing board.

“I’ve just always liked organizing leagues and games,” said Conway, who will be a junior at Janesville Craig. “So recently we got together and were playing and we said, ‘We should ACTUALLY organize a league and ACTUALLY play and see how many teams we can get.’

“If you have too many kids on a team, somebody always can’t make it and you have to cancel the games. So we just did 2 vs. 2.”

In complex times, Conway and gang have kept it simple.

The two-hand-touch league has six teams, each with two players apiece. The four with the best records after five weeks (10 games) will make a tournament-style playoff.

The first team to 42 points wins, with each touchdown counting as seven, and a team must win two out of three games to 42 in order to earn the victory. To keep things interesting, if the trailing team is within seven—say down 42-35—when 42 is reached, they get a rebuttal possession to attempt to tie and force an overtime.

“No extra points or anything, no kickoffs,” Conway said. “You can get one first down.”

The 2-on-2 format more often than not leaves a receiver attempting to get open against a pair of defenders. It can get competitive.

Frost’s aforementioned double-move touchdown helped he and Conway—the Patriots, as they call themselves—a victory that moved them to 4-2 on the season, good for second place.

The league leaders? Well, they likely would have been helping Janesville Craig on the Friday nights this fall. Dan Deltgen was the Cougars’ backup quarterback last year, and fellow senior-to-be Eli Schucha was a running back who totaled more than 200 yards from scrimmage.

Conway said he might be the league’s only player who wouldn’t have been out for football this fall. Instead, with the high school season pushed to spring, the only organized snaps the high-schoolers will see will come during the final couple weeks of their 2-on-2 fun.

What are you up to?

What are you doing to remain active and competitive through sports during the pandemic?

Do you have a league, club or small group that continues to find ways to get together?

A longstanding game or tee time that is helping to keep you sane?

Have you started a new sport because your usual pastimes were no longer an option?

With high school sports and many other larger organized leagues still at a standstill due to COVID-19, Gazette sports editor Eric Schmoldt is interested in writing about ways that local sports are forging on.