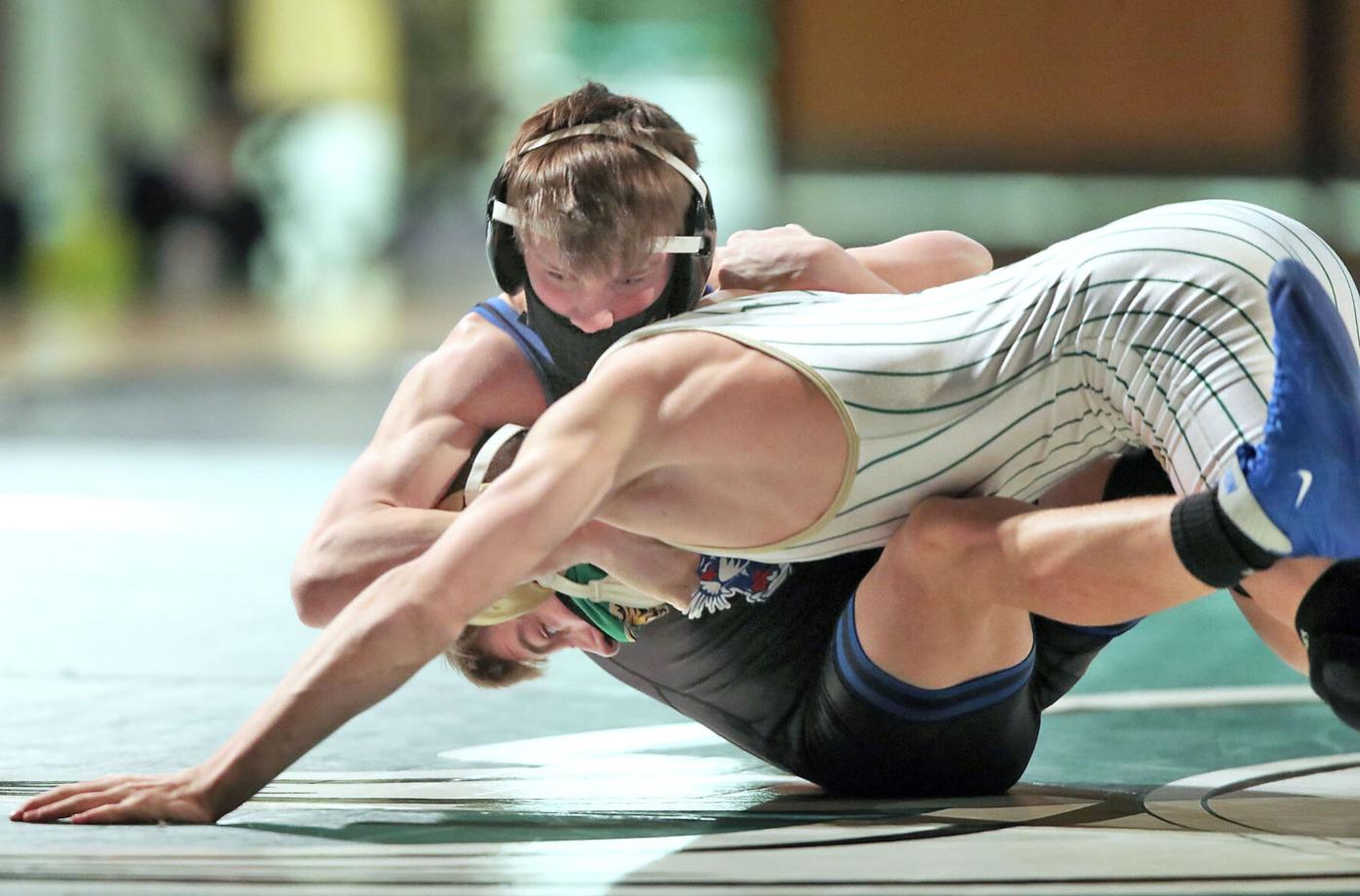 Janesville Parker’s Carter Herbst, left, grabs the head of Janesville Craig’s Hunter Klietz (stripes) during their 138-pound match Dec. 22. Wrestling is just one of the sports affected by the pandemic with a one-match maximum per week. The plans for a wrestling state tournament are still in the works, while other sports have finalized schedules. 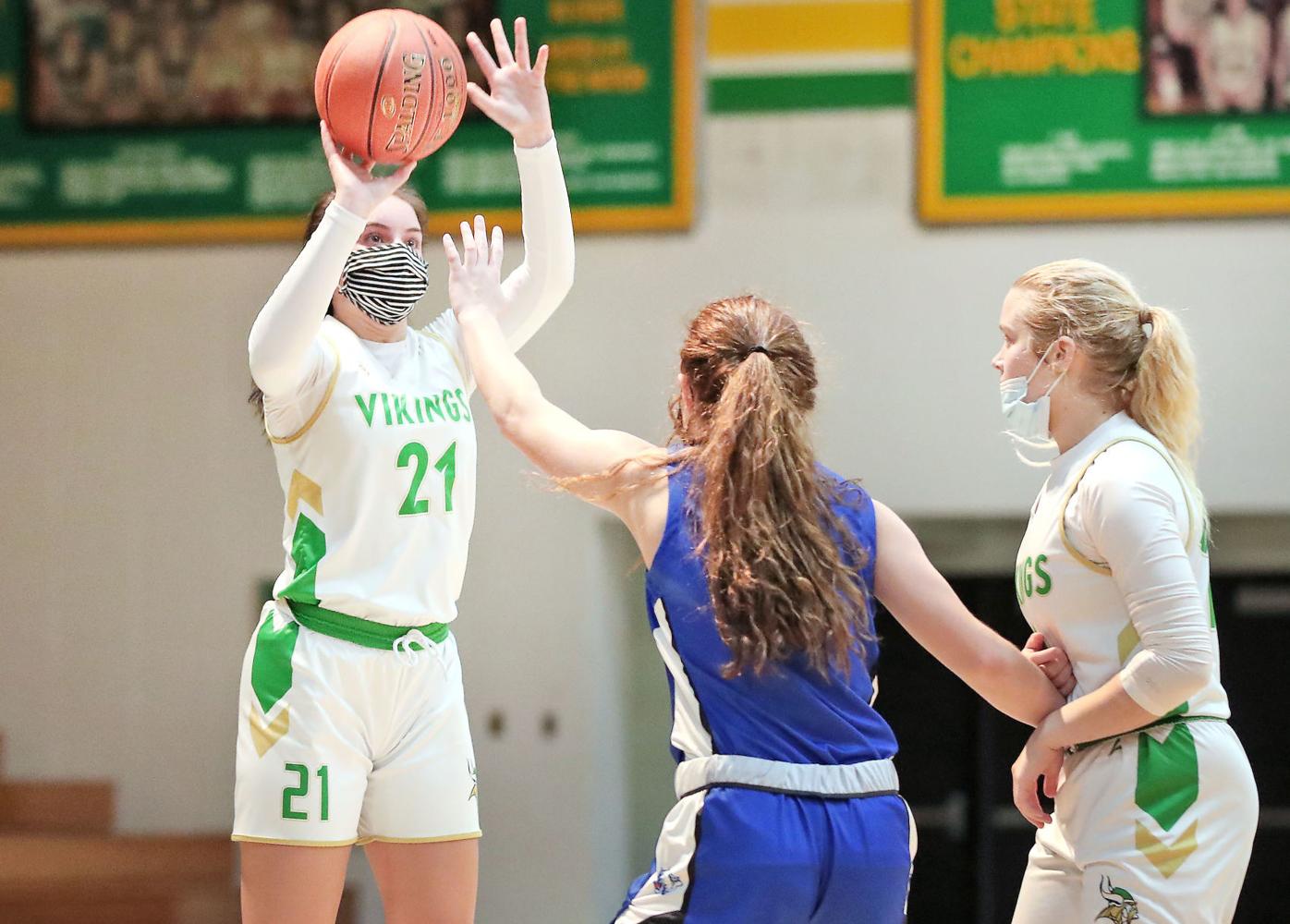 Janesville Parker’s Paisley Booth pull up for a three-pointer during their non conference game at home against Janesville Craig on Saturday afternoon. 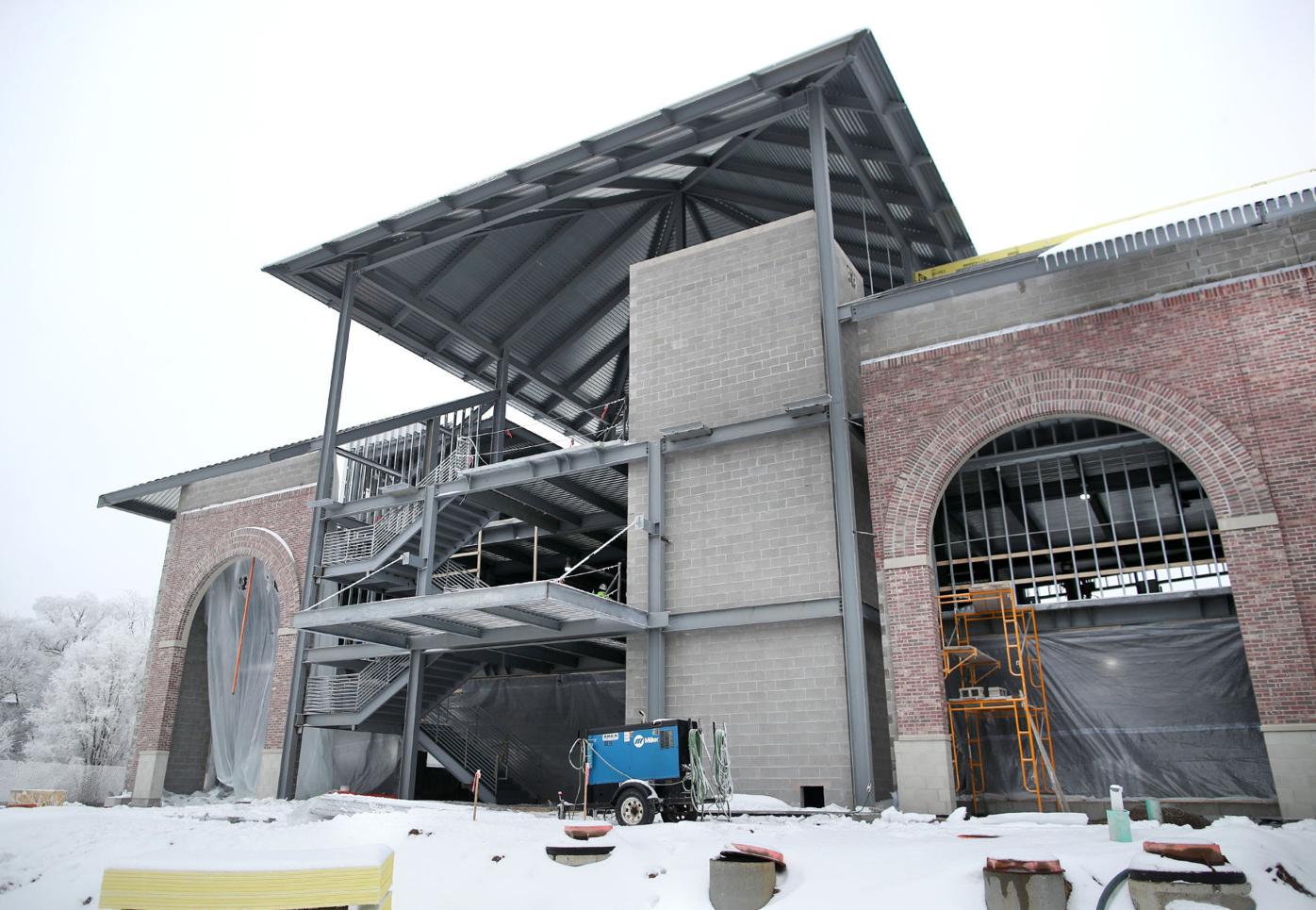 The front entrance of ABC Supply Stadium, the new location of the Beloit Snappers. 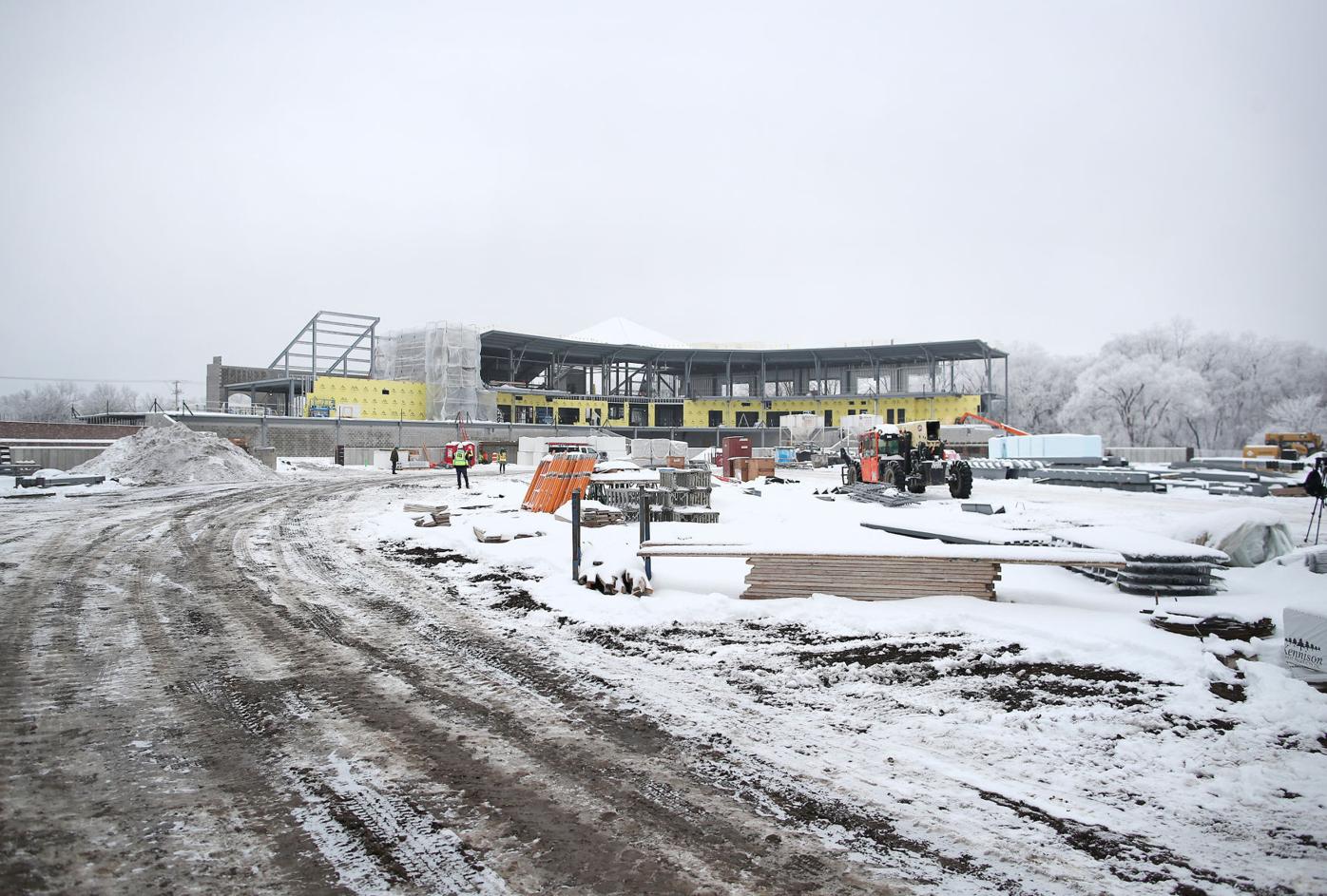 Construction on ABC Supply Stadium, located in downtown Beloit, continues and remains on schedule for a mid-summer opening in 2021. 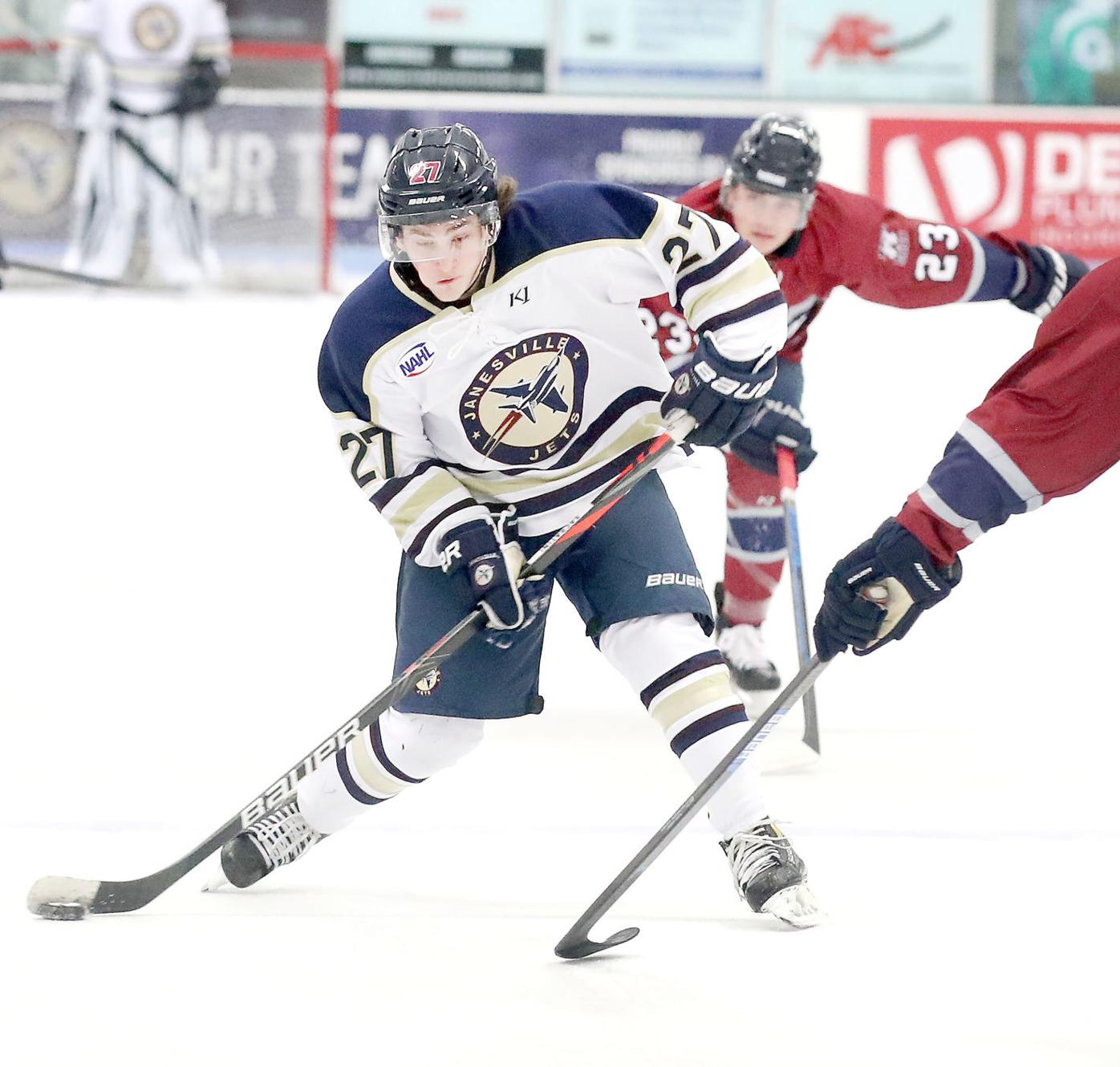 Janesville Jets’ Jake Sacratini takes a shot towards the goal during the first period of their game at home against the Fairbanks Ice Dogs on Saturday, Jan. 3. Fairbanks defeated Janesville 5-4 in overtime. 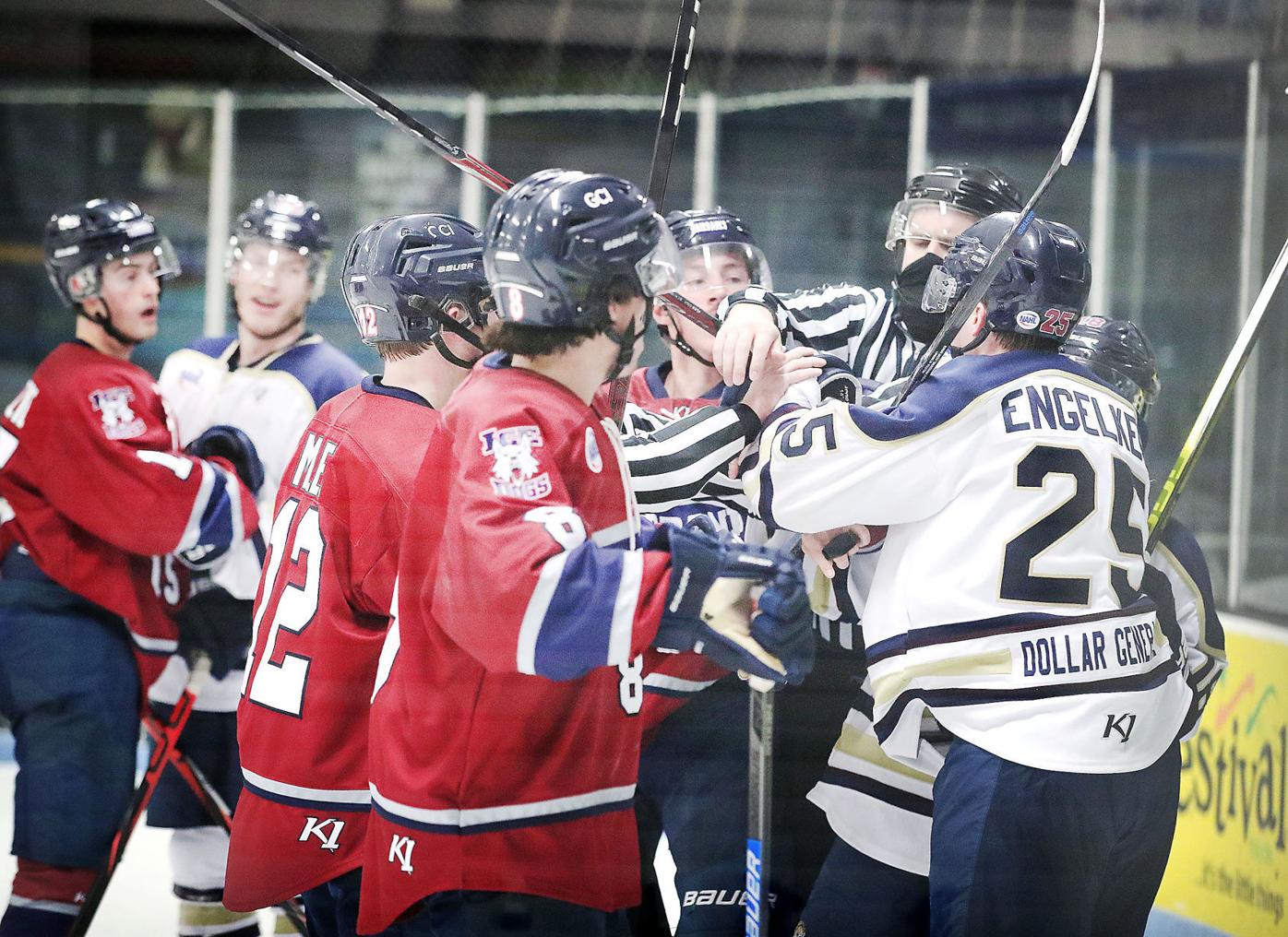 The officials intervene between players from both teams before a fight starts during the first period of their game in Janesville on Saturday.

Janesville Parker’s Carter Herbst, left, grabs the head of Janesville Craig’s Hunter Klietz (stripes) during their 138-pound match Dec. 22. Wrestling is just one of the sports affected by the pandemic with a one-match maximum per week. The plans for a wrestling state tournament are still in the works, while other sports have finalized schedules.

The front entrance of ABC Supply Stadium, the new location of the Beloit Snappers.

The officials intervene between players from both teams before a fight starts during the first period of their game in Janesville on Saturday.

As we ushered in 2020 at this time a year ago, we never could have imagined what the year in sports—or really, without sports—would look like.

Anything that would have been printed in a column like this was either canceled or drastically altered due to the COVID-19 pandemic.

So as I sit down to write my list of what to look forward to in local sports in 2021, my biggest hope is that the things on the list come to fruition as we continue to battle the coronavirus in the days, weeks and months to come.

Additional postponements and cancellations are a certainty, but hopefully as the year continues, in the grand scheme of things we continue moving toward some sense of normalcy.

With that in mind, here are some of local sports storylines on my mind ...

In 2020, we saw high schools lose their spring seasons entirely, about 1/3 of the state’s schools move their fall seasons to an alternate spring model and now winter sports trickle back a little at a time.

If the fall was any indication, we should see WIAA culminating events this winter. All fall sports except football crowned state champions.

State boys swim is less than a month away already, and the WIAA lists Waukesha South as the host.

When winter is over, focus will shift to this spring’s “alternate fall” season. Pretty much every Rock County school district opted to shift their fall sports to this spring, and the WIAA set the dates to include seven weeks of competition. Football practice can begin March 8.

The earliest football games can be played is March 24.

Many of the alternate fall seasons do not end until late April or even early or mid-May, which means the start dates for spring sports were pushed back. Practices for baseball, softball, boys golf and track and field start April 19, and most seasons run until late June.

A close look at those dates shows quite a bit of overlap between the end of competitions for the alternate fall season and the start of practices for spring. That will keep athletic directors busy sorting out gym times and sites for practices. And student-athletes might have tough decisions to make, like if they are OK with finishing out their football season before joining up late for the start of baseball.

But, better to have those kinds of decisions to make than have opportunities taken away altogether.

Let’s all cross our fingers that the 2021-22 high school sports season looks a lot more normal.

One more note specifically on the high school scene that we’ll need to keep an eye on, and that’s conference realignment—and in football only.

Janesville’s Craig and Parker High football teams were slated to have their first seasons in the Badger Large Conference this past fall before that was all wiped out.

Hopefully they’ll play a normal Badger Large season next fall, but then it looks like the Cougars and Vikings might be headed back to the Big Eight.

The WIAA announced Thursday that a realignment plan put together by Sun Prairie—which is set to split into two high schools in 2022—has advanced its way through the process and now will be presented to the Board of Control for approval March 5.

It’d be Craig, Parker, the four Madison programs, Verona and Middleton in the Big Eight. Beloit Memorial would move to the Southern Lakes, and Delavan-Darien to the Rock Valley—again, just for football.

In general, I do like that Craig and Parker in the Big Eight for all sports, instead of having different conferences for different sports.

But mostly I just hope that if the WIAA decides that’s the right plan, that the Vikings and Cougars can then just stay put and not have to go through constant wondering about what league they’ll be in.

What’s in a name?

It wasn’t long ago that it looked like minor league baseball would be gone from Beloit.

Now it’s one of the most anticipated sports stories in 2021 and for years to come, with a new ownership group, a new stadium being built, new alignment with the Miami Marlins and, eventually, maybe, probably, a new team name.

Quint Studer announced in September that the Snappers would take on a new name when they move into their new stadium this summer. The team then released five finalist nicknames—the Moo, Cheeseballs, Polka Pike, Sky Carp and Supper Clubbers.

Studer and the team faced a dose of backlash, and a petition sprung up to save the Snappers name.

Four months later, fans have had a chance to see the new stadium take shape in Beloit, but they still don’t know what the team’s new name will be.

Team officials said Wednesday during a tour of the stadium grounds that they are “close to getting a name finalized.”

Months ago, I put my vote in for Sky Carp.

At this point, I’m just ready to know the new name and see the logo.

Speaking of new sports arenas, talks of a new ice arena in Janesville stalled out during the early stages of the pandemic, much like everything else.

It’s yet to be seen whether or when those talks might resume.

They saw their league season put on hold for nearly the entire month of December, and the NAHL recently announced it has pushed back the end of its regular season and playoffs to accommodate teams that need to make up games.

The Jets resumed play last week and host Kenai River tonight and Saturday. If they can avoid additional stoppages, they will be plenty busy over the next five months or so.

While major college sports have resumed in Division I, UW-Whitewater and its Division III counterparts have been dormant since March—at least in terms of competition.

Warhawks programs have been practicing in hopes they might salvage some sort of season.

The Wisconsin Intercollegiate Athletic Conference announced last month that winter sports might be able to start in February, as long as a certain level of COVID-19 testing was available.

UW-W athletic director Ryan Callahan told me a couple weeks ago he is hopeful the winter sports will get a chance to play some of a season and that Warhawks and WIAC leaders need to continue doing everything they can to make sure spring sports get their seasons. If they don’t, they’ll have missed out on two consecutive seasons.

Whether watching on TV, an online livestream or in person, here’s to a great year of local sports!

Eric Schmoldt is the sports editor of The Gazette. Got a 2021 local sports storyline on your list that’s not on his? Email him at eschmoldt@gazettextra.com.