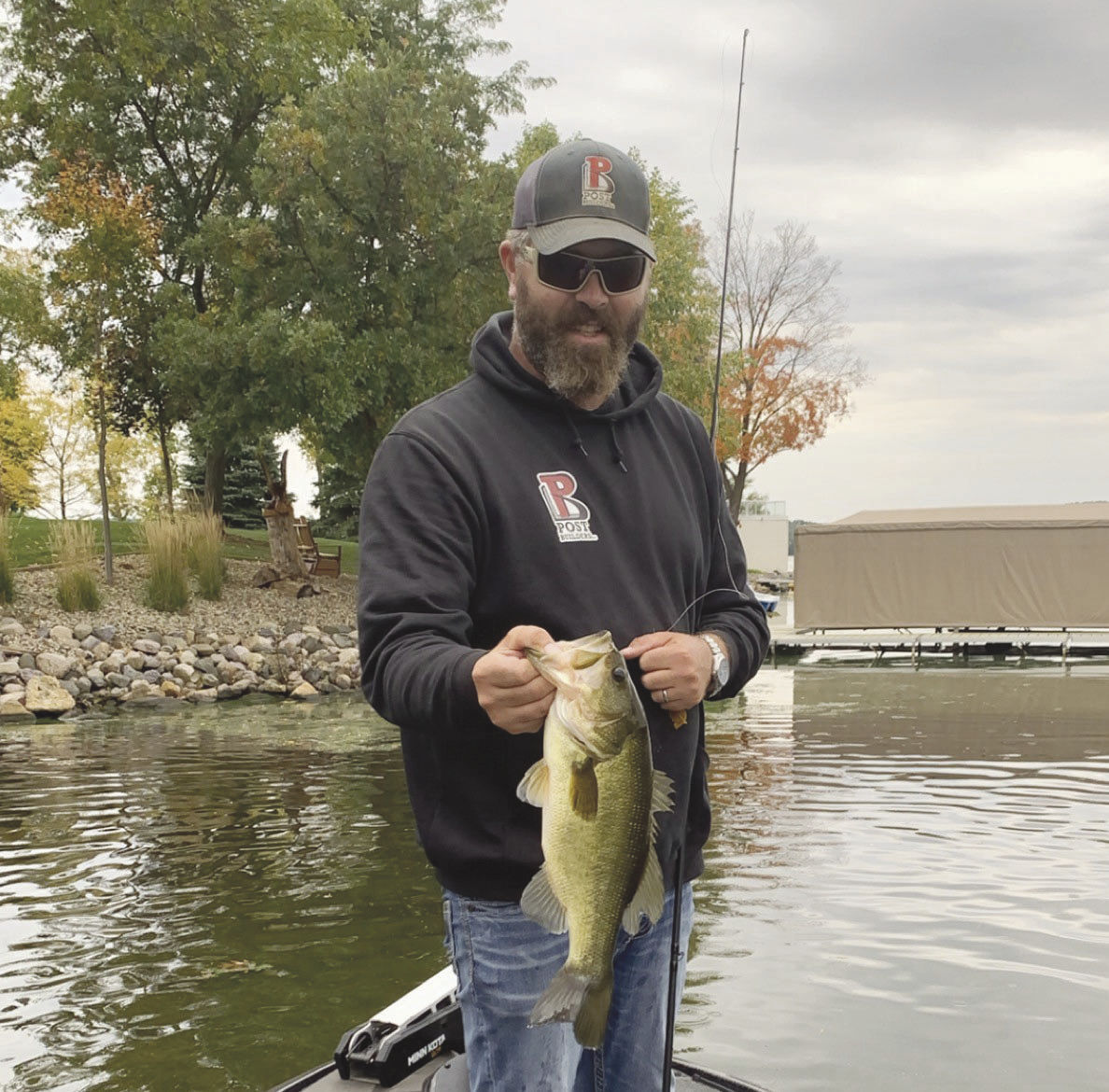 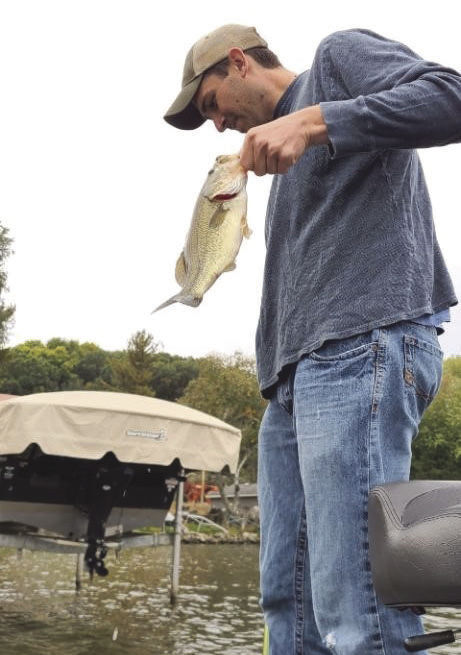 “Don’t catch a fish on your first cast,” Brian said as he handed me a rod and reel with a white spinnerbait.

I tugged the brim of my cap a little lower to hide my laughter.

I warned Brian Post as we were planning this trip that my fishing experience in life was pretty much limited to casting in a line from shore with a bobber, sinker, hook and night crawler. Maybe that was a bit of an exaggeration, but honestly the biggest fish I’d caught in my life was on a Mickey Mouse fishing pole.

Still, Post—who is in his rookie year on the Bassmaster pro bass fishing tour—agreed to meet me at Lake Wisconsin on a recent Sunday morning to teach me a few tricks of his trade.

We met at the Whalen Grade boat launch at 7:30 a.m. I think we were six miles away in Okee Bay about seven minutes later. The Mercury Pro XS engine on the back of his sleek black and red Falcon bass boat got us going about 60 miles per hour. ... Good morning!

It was probably 7:39 when Post delivered his first instructions—which I later found out were born more out of superstition than anything else—that I not immediately catch a fish.

Little did he know that I had a better chance of catching him, his boat, a nearby dock or myself than landing a fish on my first cast.

At 7:41, Post caught his first fish of the day, a largemouth bass that would be picture-worthy for this amateur—on his second cast of the day.

I guess that was my first official lesson. There were several more over the next five hours ...

Aim below the motor

Post knows Lake Wisconsin like the back of his hand at this point. And he’s got a mental encyclopedia that includes specific docks that have produced bass that have helped him win tournaments over the years.

If fish could talk, I’m fairly certain at least one of those he caught last Sunday would’ve asked, “Hey, haven’t I met you before?!”

I quickly learned Post has a propensity to land his fish when he casts bait directly at a dock’s ladder.

He told me to keep an eye on the corners underneath the docks as we trolled by. If a spider had spun a web, that meant no angler had sent a cast through that particularly area yet that day, which meant you’d be hitting a fresh spot.

Brian also told me to try and cast my bait into the water directly below the motor of boats that were on a lift and out of the water at their docks. The boat’s motor, he said, tends to clear a bit of a hole on the floor of the bay, and fish sometimes like to hang out, or even spawn, on that spot.

Sure enough, my biggest catch of the day came almost immediately after he told me to try my luck on one of those spots.

Tools of the trade

I’m not exactly handy with tools, either.

This particular Sunday allowed me to prove both points.

After landing a largemouth in the boat that wouldn’t have won me any sort of trophies, I quickly realized the hook was stuck in a precarious position.

Seeing I was struggling, Brian asked his wife, Rachael, to grab me a pair of needlenose pliers. I used them to dislodge the hook, set the pliers down and sent the fish on its way.

Then I sent the pliers on their way into Lake Wisconsin, too.

Many people are attracted to bright, shiny objects.

I guess I just assumed fish might be the same way.

It was a gray, overcast day, and as rain began to fall, the only thing keeping the water from looking black was the green of algae.

Had I been by myself—heaven forbid—I probably would have picked some kind of bright-colored lure thinking that’s the only thing a fish could see.

Turns out, Brian told me, you want to use a dark-colored bait in darker conditions.

We switched from an orange Senko worm to a darker blue or black, and Brian hauled in a couple fish in the 4-pound range.

If a pro fisherman picks a date on the calendar to go fishing because he thinks conditions look good, roll with it.

Brian originally wanted me to go with him Saturday, but that day didn’t work for me.

He went anyway, and I got a text that said he absolutely crushed it on Lake Wisconsin that day.

We caught our fair share Sunday, but it was clear we weren’t even close to matching what he did Saturday. The wind had shifted nearly 180 degrees, the temperature dropped significantly and we fished in rain the final two hours we were on the lake.

Those conditions did provide me with a first, though ... the first time I’ve felt rain pelt my face while riding in a boat into the wind at 55 mph back toward the boat launch.

I wish I would have tried to keep track of how many casts I had over the course of five hours.

I started out casting about as confidently as I sounded at the start of this column.

I didn’t hook Brian, but I did snag his boat once. He had to maneuver to unsnag my hook from a dock ladder or boat lift a handful of times. And at one point he told me I got my line tangled in a spinnerbait a way he’d never seen before.

If there’s a way to make a mess of a fishing line, I told him, I’d find a way to do it.

And yet by the end of the day, I could tell I was way more confident with my casts. When I wasn’t afraid of tangling my line on something, it turned out I could often hit the spots I was aiming for. I knocked down a few spider webs and dropped my bait under boat motors. I even caught half a dozen fish or so, including a white bass whose presence even shocked the pro.

Brian said he could definitely see progress. And then Rachael told me about the times she has caught Brian practicing in the “offseason” by casting lures toward small cardboard boxes. A pro perfecting his craft like an NBA guard putting up 3-point shots in the gym during the summer.

Brian has decades of experience under his belt. He showed he belongs on the Bassmaster scene by reaching the final day and finishing 12th out of more than 200 fishermen in his second Open tournament ever. And he showed it to me up close and personal by putting us on fish, even on a day when conditions were less than ideal.

And like most professionals, after such a day, he wasn’t satisfied with his showing. He says he wants to take me out again on a day when the fish are more active.

I look forward to that.