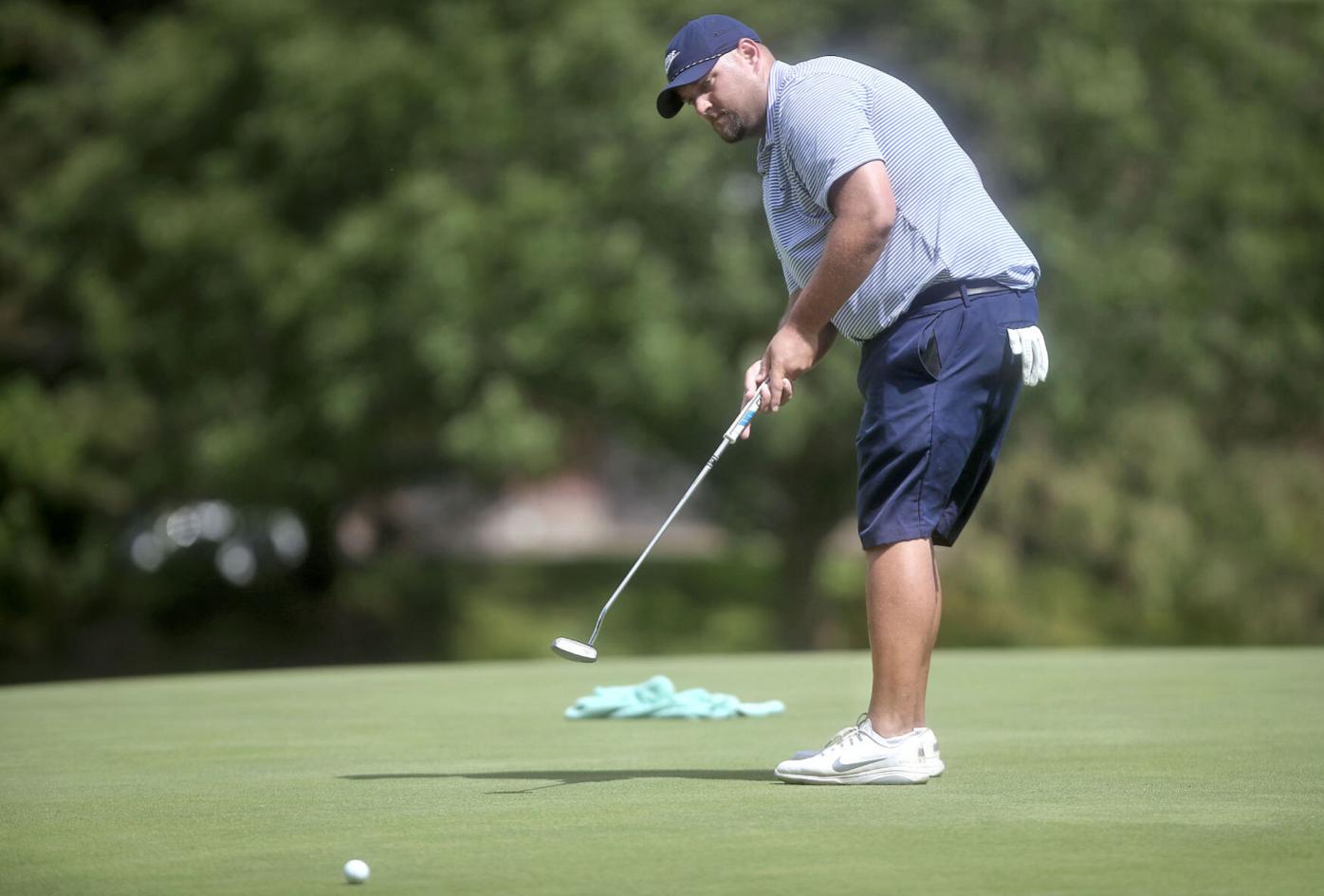 Sam Van Galder won the Janesville Men's City Golf Tournament on Sunday for the seventh time in his career. He received a congratulatory message from Jan Hoffman, who is the all-time leader with nine city titles between 1961 and 1975. 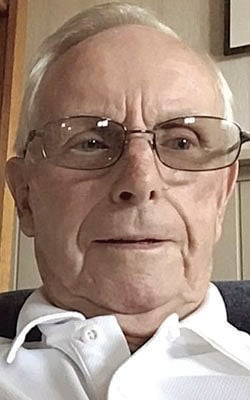 Jan Hoffman channeled his inner Sandy Koufax. Koufax, the Los Angeles Dodgers’ Hall of Fame lefty pitcher, retired at the age of 30 in 1966 despite the fact he was in the midst of one of the best six-year spans in baseball history. An arthritis condition helped lead Koufax to the decision.

Hoffman had no similar health issues. But the Janesville golfer admired that Koufax left baseball while at the top of his game.

And so when Hoffman won his record ninth men’s city golf title in 1975, he walked off the course and vowed never to enter the tournament again.

“I was 34 years old, and I retired. I walked off and said, ‘That’s it, I’m done,’” Hoffman said Monday during a phone interview from his home in Oregon, Wisconsin. “Everybody said, ‘You’ll be back.’ But I’ve never gone back since then.

“Sandy Koufax retired when he was at the top of his game, and I thought, ‘That’s what I want to do. I want to go out a winner. I don’t want to just hang around.’”

Hoffman still hangs around golf courses to this day. Now 79 years old, he said he still plays two or three times per week and shot a 78 while playing with his son, Scott, of Janesville, at Prairie Woods Golf Course last week.

But he never entered another city tournament. Even so, Hoffman—who was inducted into the Janesville Sports Hall of Fame in 1993—remains the king of the city in men’s golf.

On Sunday, Sam Van Galder won the men’s city title for the seventh time of his career. He joined Gregg Clatworthy and Chris Pastore in a tie for second place all-time.

One of the many congratulatory messages Van Galder got Sunday night came from Hoffman, despite the fact the two have never met.

“He sent me a message on Facebook just congratulating me and telling me his record is there to be broken,” Van Galder said. “I’ve never known Jan, but that was pretty cool.”

Cool as in a 79-year-old who is sharp enough to figure out Facebook.

Not only is that how Hoffman got his message to Van Galder, but it is how this writer tracked down the city’s all-time leading golf champ in a matter of hours Sunday night and Monday morning.

Van Galder is 33 years old and would love to catch Hoffman’s record.

That will be a fun story to track moving forward, but in pondering it with my father-in-law, I also realized I knew very little about the golfer Van Galder is attempting to catch in the city tournament record books.

Hoffman was introduced to the game of golf when he was 12 years old. A friend and the friend’s father invited him to play Riverside Golf Course, so he snagged his mother’s set of clubs and gave it a try.

He was hooked, but he also knew he was going to need his own set of clubs. Filling his own bag became a task in its own right.

“I would save enough money to go down to the local Sears store in downtown Janesville to buy one club, which I think cost $5. I accumulated my set of clubs that way,” Hoffman said.

He saved some of his money from working as a caddie at the country club.

“Then when I got to high school, my father said if I saved myself enough money to buy a set of irons, he would buy me a set of woods.”

Hoffman achieved that goal, and he and his dad went to Lake Lawn in Delavan to buy a set of woods.

“The guy in the pro shop said, ‘We’ve got a set of Spaulding Top Flites here, why don’t you take them out and try them?’” Hoffman recalled. “He gave me three golf balls ... and sent a kid out to retrieve them. I hit the first one over the kid’s head across the road. And I hit the final one over the road, too, and he said, ‘OK, that’s it! You can’t hit another one.’

Hoffman played for Janesville High School and went on to play for what is now UW-Whitewater in college.

Hoffman won his first city title when he was 20 years old in 1961. He enjoyed it so much, he won the next five tournaments.

Of course, the tournament was a bit different back then.

These days, the event includes three rounds played from Friday through Sunday, with one round each at Janesville’s Riverside, Glen Erin and Country Club courses.

In Hoffman’s era, the city tournament was four rounds. The field would play Riverside on Saturday and the Country Club on Sunday and then would meet up again the following weekend to repeat that schedule.

“If you were leading the tournament after Sunday of the first weekend, you had to wait a whole week to play the second two rounds,” Hoffman said. “So that was a lot different.”

After his five-year winning streak ended, Hoffman stormed back and won again the next two years (1967 and ‘68). He remembers that 1968 title because he cruised to victory and set a scoring record along the way.

“I won by 14 strokes,” Hoffman said. “Then the following year my good friend, Dan Nitz, beat me by 14 strokes and he tied my record.

Nitz was far from the only rival for Hoffman. Harold Kotwitz won five of his six city titles leading up to Hoffman’s first win in 1961, and Kotwitz won again in 1974. Lyle Gifford ended Hoffman’s five-year streak in 1966 with the second of his three championships.

“As I was coming up in my early 20s, there were established golfers who had been there for years,” Hoffman said. “Harold Kotwitz comes to mind, and Lyle Gifford. There was quite a bit of competition. I loved to practice and work at it, and I think that’s what allowed me to achieve what I was able to do.”

When asked where he likes to play these days, he said, “I’ll play all over—any place there is a golf course.

“I still enjoy it. I’ve met a lot of nice people, and the game has been great to me.”

He plays in a Monday senior league that rotates to various courses in south-central Wisconsin. The COVID-19 pandemic has messed with his schedule at times, though, this summer.

Hoffman still regularly shoots around his age, firing rounds in the mid- to upper-70s.

One of his favorite memories of the game was in 1964, when he got to represent the city during a round at the Beloit Country Club with legendary pro golfer Jack Nicklaus.

The exhibition was part of a clinic sponsored by the Beloit Junior Chamber of Commerce and The Beloit Country Club.

“There were about 1,000 people there, and I represented the city really well,” Hoffman said. “It was just a great day.”

Hoffman, who was a teacher for 32 years, including 24 in Janesville at Monroe Elementary and Franklin Middle schools, believes golf has kept his mind sharp, including preserving many of his favorite memories from the course 40 and 50 years ago.

“I can remember golf courses and specific holes,” he said. “I’ll play today and say to one of my playing partners, ‘We’re going to such-and-such a course and the fifth hole is a par 4.’ They’ll say, ‘How do you remember that?’ I don’t know, I just do.”

As for whether he ever looks back on those memories and wonders how many more city golf championships he might have won if he had continued entering, Hoffman said he has no regrets about his Koufax-like moment.

“I don’t wonder how many I could’ve won,” Hoffman said. “I was very proud of what I did, and that’s it.”