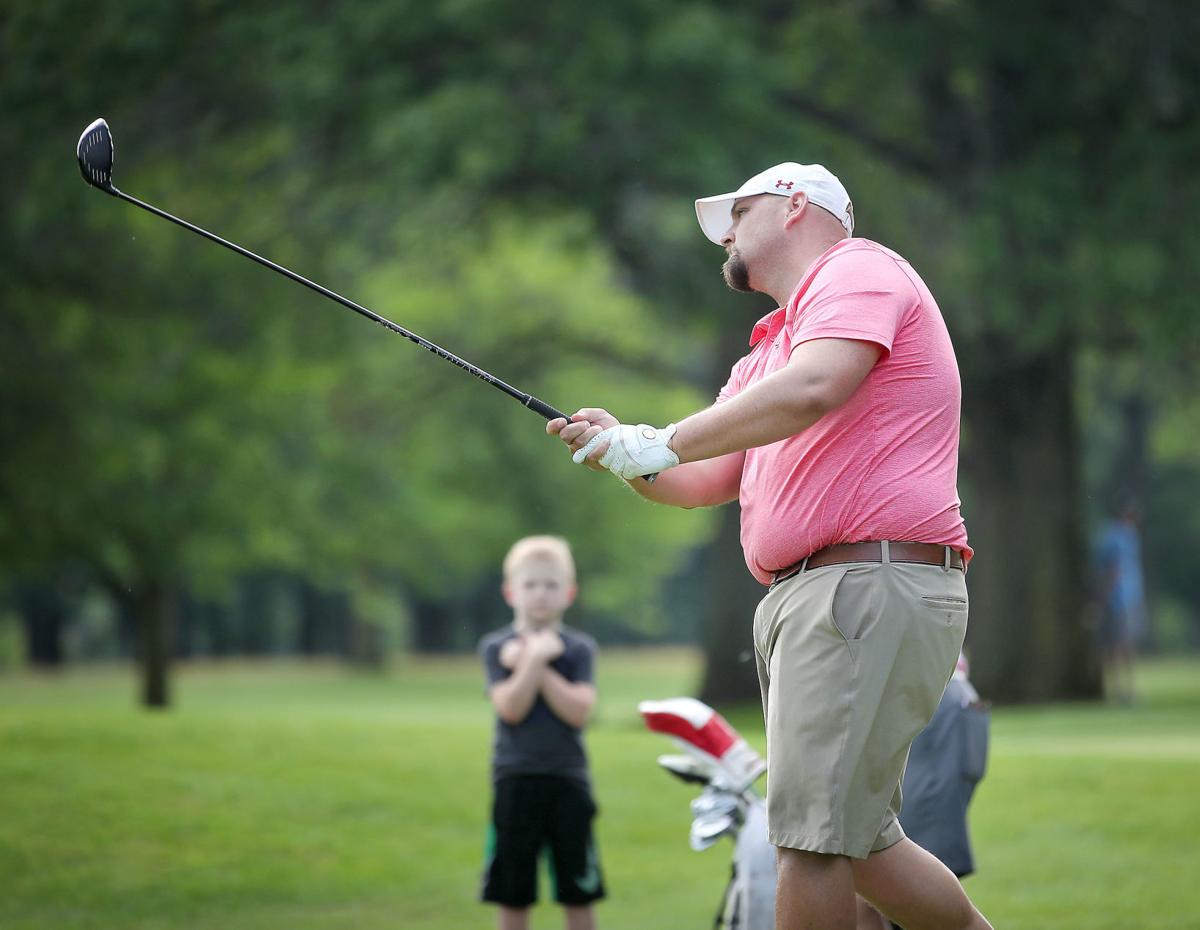 Sam Van Galder hits from the 18th tee box during the final round of the 54th Ray Fischer Amateur Championship at Riverside Golf Course in Janesville on Sunday. 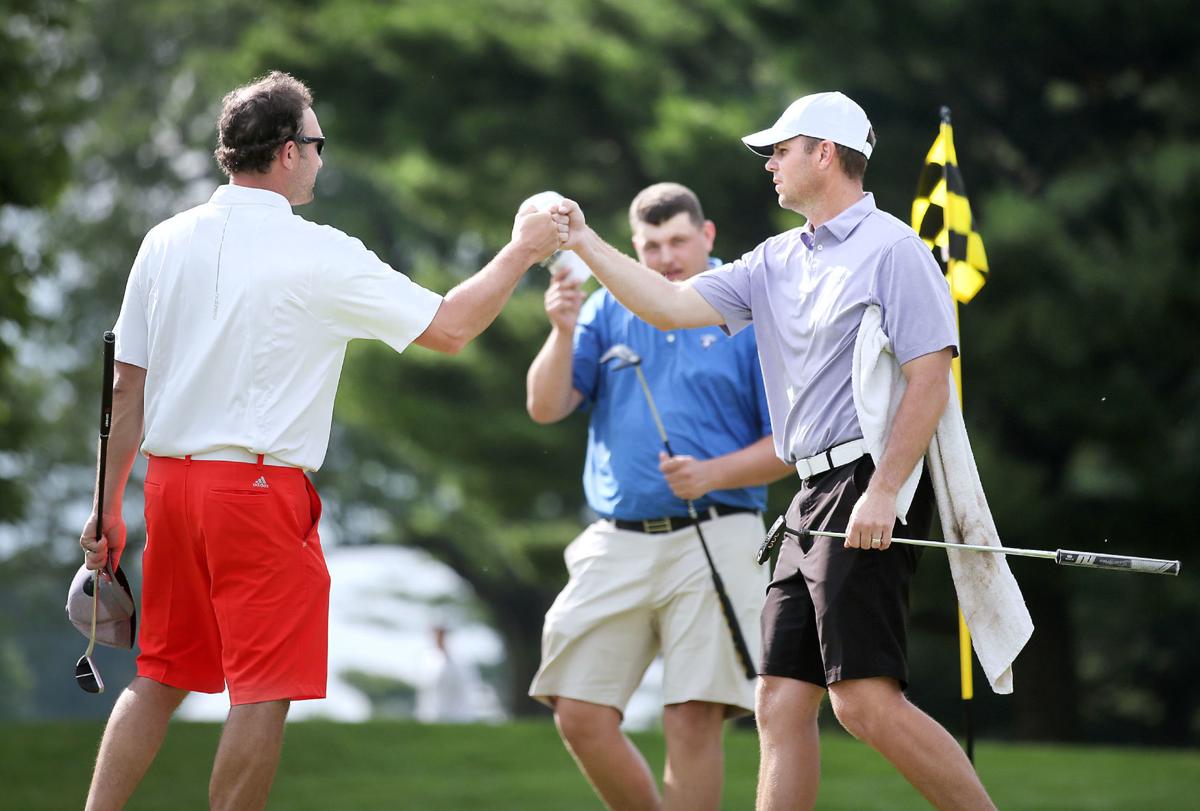 Joe Weber, right, fist bumps Derek Hilmershausen and Jakob Schroeckenthaler, behind, upon finishing the 18th hole on the final round of the 54th Ray Fischer Amateur Championship at Riverside Golf Course in Janesville on Sunday. 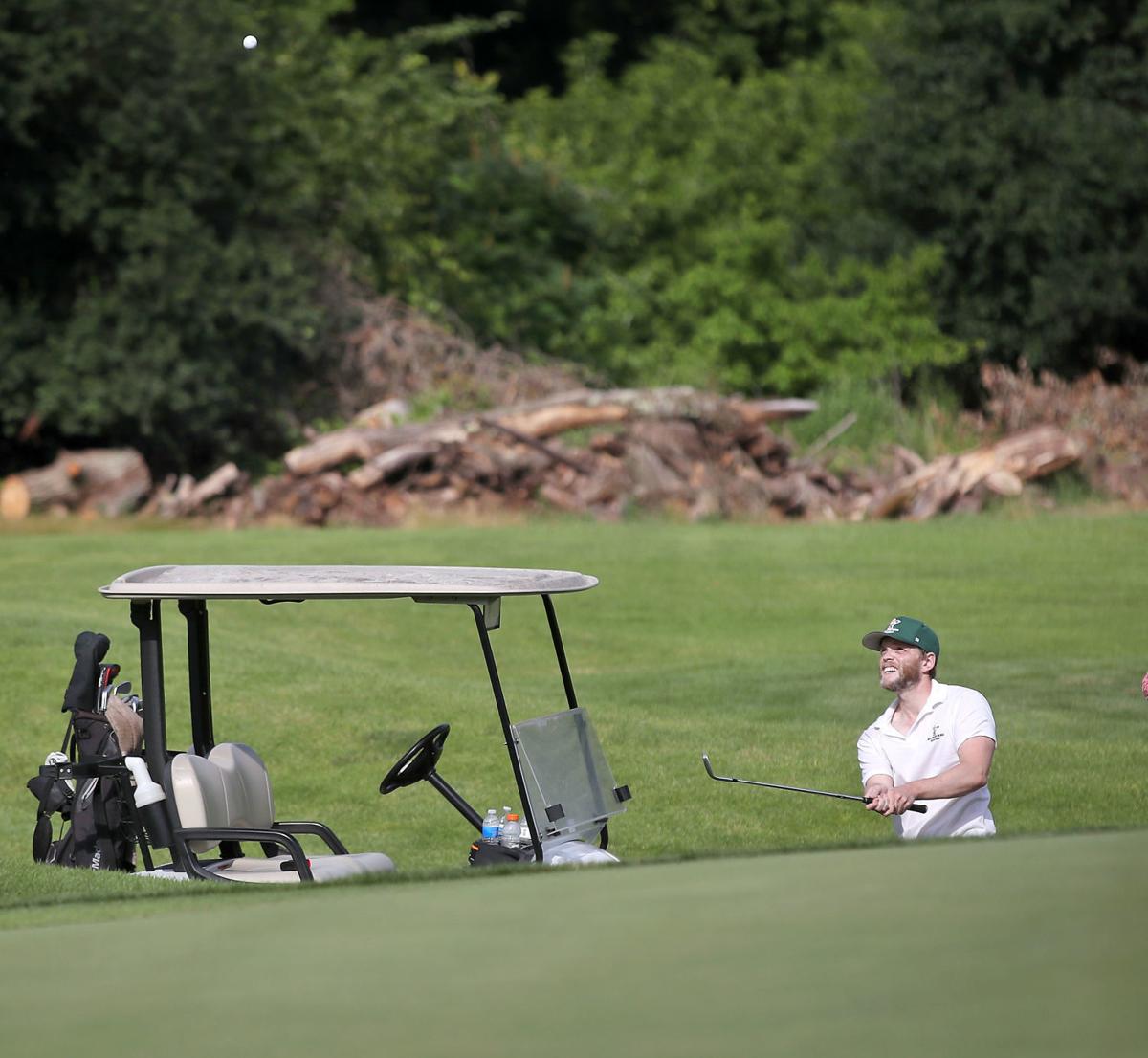 Jack Schultz chips onto he 18th green during the final round of the 54th Ray Fischer Amateur Championship at Riverside Golf Course in Janesville on Sunday.

Sam Van Galder hits from the 18th tee box during the final round of the 54th Ray Fischer Amateur Championship at Riverside Golf Course in Janesville on Sunday.

Joe Weber, right, fist bumps Derek Hilmershausen and Jakob Schroeckenthaler, behind, upon finishing the 18th hole on the final round of the 54th Ray Fischer Amateur Championship at Riverside Golf Course in Janesville on Sunday.

Jack Schultz chips onto he 18th green during the final round of the 54th Ray Fischer Amateur Championship at Riverside Golf Course in Janesville on Sunday.

As the leaders made the turn at Riverside Golf Course on Sunday afternoon, I frantically smashed the refresh button on my phone’s web browser.

For the first time, the scores at the Ray Fischer Amateur Championship were being updated hole-by-hole. I needed to see exactly where things stood with nine holes to play.

One hundred five days passed between the WIAA boys basketball sectional between Beloit Turner and Edgerton and the start of the Fischer on Friday. No live sporting events during that span—save for maybe a small junior golf tournament, a neighborhood pickleball game, some virtual running races or a pickup basketball game.

Now, sports were back.

And when the sun rose Sunday for the 36-hole finale of the Fischer, there was no shortage of storylines.

At one point early Sunday morning, the top three (and ties) of the leaderboard read like a sports editor’s dream:

You’ll notice I didn’t mention Joe Weber. The 36-year-old dentist from Onalaska wasn’t on that leaderboard. He didn’t even really consider himself in contention—even when he shot an 8-under 64 in the third round Sunday morning. That’s because Tolan had also shot 64 and appeared poised to run away with the victory.

Most of those names I mentioned either faded back down the board or at least never factored in the race on the back nine.

Even there, no one seemed to be going low, and I think everyone just assumed Tolan would prevail.

Van Galder’s group had probably two dozen followers, and they watched as his two playing partners posted the clubhouse lead at 18 under. Van Galder finished 12th at 12 under.

One group back, Weber and his playing partners had exactly zero followers when I saw them on 17. I guess that’s what the pros feel like right now with no spectators, but it still felt odd that not one had a wife or parent or girlfriend following along.

After seeing the course-record 62 tied in the third round, Weber’s 68 to close out the tournament and post 19 under felt solid but didn’t really turn any heads.

Tolan had four holes to play and needed to birdie one and par the rest and he’d win. He’d had 23 birdies or better and just six bogeys up to that point, so one more seemed realistic. But then he burned the edge for birdie on Nos. 15, 16 and 17. A wayward drive on 18 had him scrambling to try and make par and force a playoff, though he said he didn’t know it at the time. This time it was a par putt that burned the right edge.

Weber, who had finished play about an hour earlier, was—somewhat suddenly and surprisingly—the winner.

And so though those interesting storylines early never came to fruition, the tournament ended with drama, ultimate highs and lows, a comeback, and another veteran amateur golfer winning a tournament that until half a decade ago used to be dominated by the college kids.

So much fun. I live to watch sports and to write about them. So that 105 days had been painful. We’ve done our best to get by, and there are certainly greater issues in this country than not having sports, but was exciting to have sports back on the radar.

That said, covering an event also came with a wide array of thoughts and emotions.

As much as I want sports back, is now the right time? With COVID-19 numbers soaring in certain areas of the country and at least seeing an uptick around here?

Was there enough social distancing going on? That’s not a question or a phrase I could have pondered the last time I covered sports, but here we are. I still saw a few handshakes and high-fives, and the groups that had followers, sometimes six feet apart was an afterthought. At times, I even did some math in my head for myself and realized I probably needed to make some more distance.

The tournament itself was not without a positive test. Two players withdrew after the first round because one of them tested positive despite being asymptomatic and the other had been in contact with the first. Tournament officials seemed to handle that as well as possible, letting the rest of the golfers know of the positive test and through a bit of tracing confirming the infected player had not been in the clubhouse or a cart and had minimal contact with other players, staff or spectators.

All of this—from the familiar drama and emotions of competition to the wariness and what-ifs of health—will be part of whatever sports we’re going to have in the near future, and maybe beyond.

The July sports schedule around here is usually pretty light, and this year might be even lighter. But the scheduled start of high school football practice is exactly five weeks from today.

Will that happen? What will school look like come fall? And then beyond that, what do sports look like? The Big Eight Conference athletic directors met virtually Monday and scheduled a July 21 meeting to talk about fall sports after getting further guidance from state and local authorities.

I want it all back just as much as anyone. I got to see the thrill of victory and agony of defeat Sunday, and it only fueled my fire to watch live sports and to tell their stories.

But safety must be the No. 1 priority. And in that regard, more than 100 days later there are still so many coronavirus questions out there.

And no matter how many times I smash that refresh button, the answers still aren’t there.