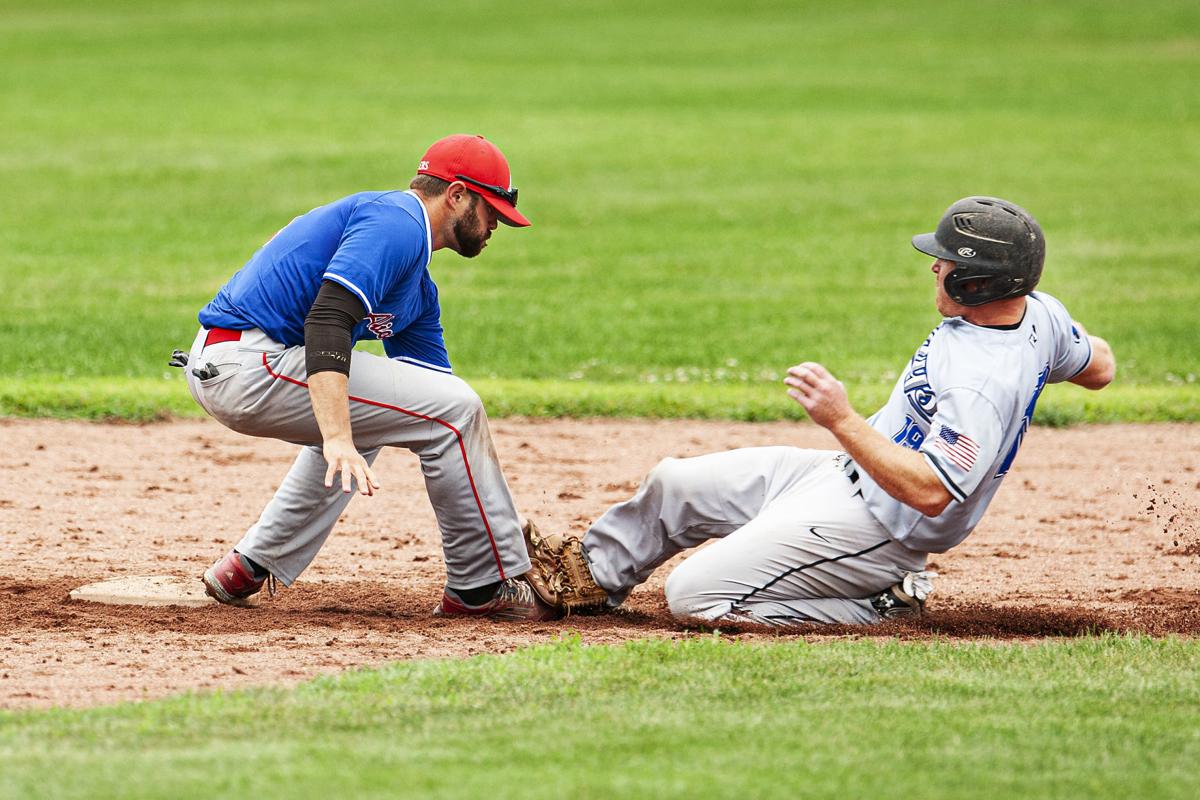 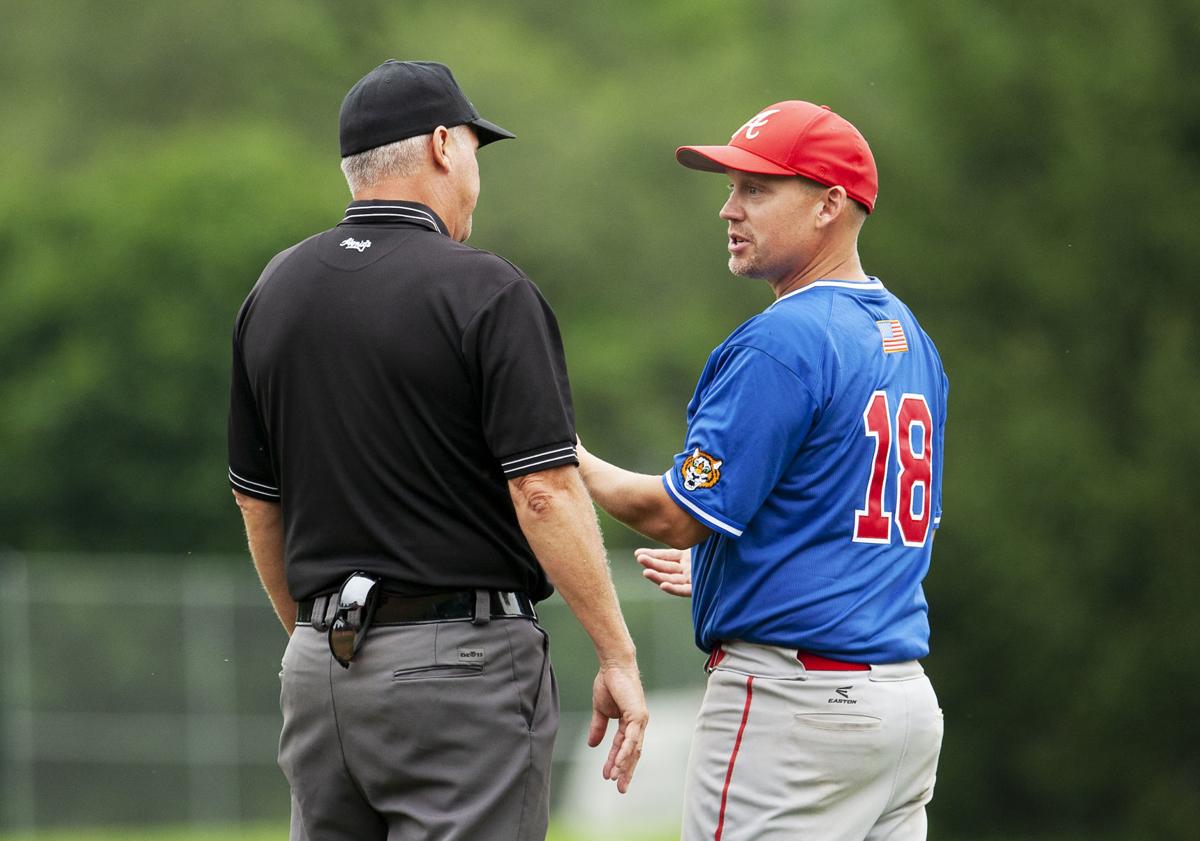 Albion manager Matt Towns, right, asks the umpire about a close play at second base in the seventh inning of a Home Talent League Southeast Section semifinal against Evansville on Sunday, Aug. 11, 2019, at Albion Park. 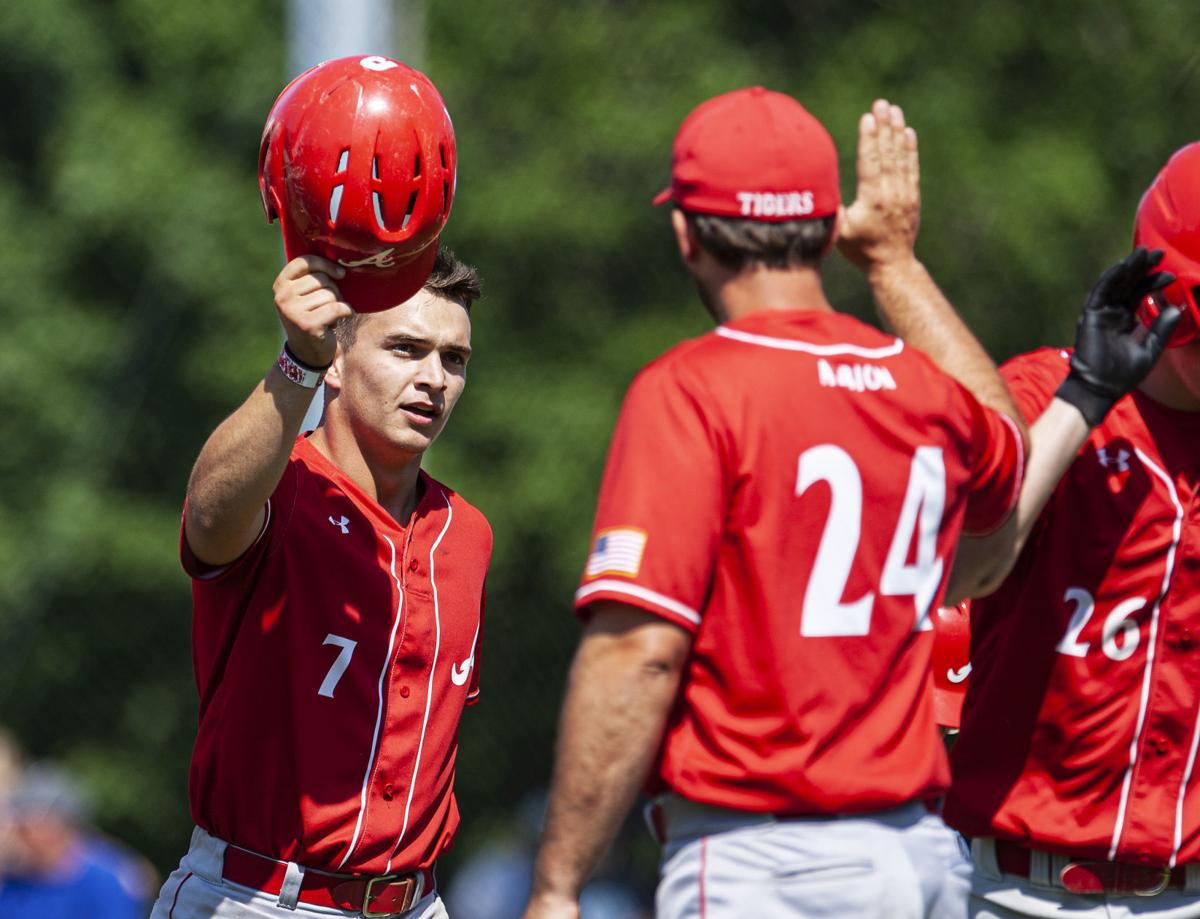 Albion’s Dan Zeimet (7) celebrates with Jesse Appel (24) after scoring on Adam Loveland’s double in the eighth inning of a Home Talent League game last July at Albion Park. Albion and the rest of the HTL hope their season can begin July 4 in the midst of the coronavirus pandemic.

Albion manager Matt Towns, right, asks the umpire about a close play at second base in the seventh inning of a Home Talent League Southeast Section semifinal against Evansville on Sunday, Aug. 11, 2019, at Albion Park.

Albion’s Dan Zeimet (7) celebrates with Jesse Appel (24) after scoring on Adam Loveland’s double in the eighth inning of a Home Talent League game last July at Albion Park. Albion and the rest of the HTL hope their season can begin July 4 in the midst of the coronavirus pandemic.

Barring last-minute changes, those words will ring out for at least one area amateur baseball team this weekend.

The Milton Junction Pub Raptors are set to begin their Rock River League regular season with a road game against Neosho at 1:30 p.m. Sunday.

But with COVID-19 regulations still in place in many counties and communities, an uptick in cases in certain states around the country and a couple cases involving amateur teams in the state, exactly what this summer’s shortened seasons will look like remains somewhat uncertain.

While many RRL and Home Talent League teams have been gearing up for the delayed start of their seasons with scrimmages or exhibitions over the past several weekends, Sunday’s game will be the first for an area team that counts toward league standings.

And it will be the first competition at all for the Raptors.

“As hard as we’ve tried, we haven’t been able to come up with a preseason game,” Milton manager Doug Welch said. “So we’ve had a couple practices this week and then we’ll head up to Neosho.

“Of course, they are one of the better teams in the league and somebody that we’ve been nip and tuck with in a pretty good rivalry. We’ll go in there without a game under our belts and see how it goes.”

The Raptors were scheduled to take on Fort Atkinson, of the HTL, in an exhibition last week. But Fort canceled that game and another against Jefferson after a player tested positive for COVID-19, team officials said in an announcement on social media.

Behind in the count

An email obtained by Adams Publishing Group from Home Talent League president Pat Reilly to the league’s board and managers dated Monday indicated the board voted 5-3 to stick with the July 4 start date to the league season.

The email indicates the board is working on a sort of “three strikes” policy.

Fort’s positive case would be considered the first strike, according to the email. A positive case involving a person close to the Wisconsin Dells team was listed as a potential second strike.

“I am the West rep and I am also ready to cancel the season with one more case,” Reilly said in his email. “But ... as the voting members dictate, the season will go on.”

A case was reported out of the Utica club since that memo went out.

At best, it appears the HTL is attempting to battle back from an 0-2 count more than a week before its postponed season is set to begin.

Other issues at hand

Several HTL teams have already announced they will not be playing this season, including Verona, Monona, Lake Mills and West Middleton.

Other amateur teams are also still dealing with their home ballparks still currently falling under closures or capacity restrictions as counties, cities and villages continue to reopen.

Milton plays at Schilberg Park, which is run by the school district and has closed facilities at least through June 30. Evansville plays at Leota Park, which cannot be used at least until Rock County’s reopening procedures reach Phase 3. The Albion Tigers play in Dane County and will not be allowed to play there until it reaches Phase 3.

“Dodge County (which includes Neosho) has a little bit more looseness with some of their villages about park usage, so they’ve been able to host games in accordance with the guidelines,” Welch said. “So far, so good. But you just kind of feel like you’re walking on a tightrope, where one little thing could throw the entire league off.”

Albion manager Matt Towns and Evansville manager Jon Frey have each had their teams play in exhibitions or scrimmages outside their home counties.

They said they have either purchased or advised players to purchase extra helmets to avoid sharing of equipment. Sanitizing wipes and spray bottles have become fixtures in the dugouts. And teams from all leagues have been instructed to have their players socially distance outside those dugouts when they can to avoid a congregation of people.

One of the bigger challenges for players is attempting to break old habits, like celebrating with high-fives.

“Against Utica, it was kind of cool, but both teams walked out to shake hands (after the game) and then we kind of caught ourselves,” Towns said. “So then we were on either side of the plate and just kind of gave a tip of the cap and a wave and a ‘good game.’

“In the moment, it’s hard to catch yourself.”

Raptors should be strong

If the season gets rolling as planned, Welch believes his Raptors team should be a contender in the Rock River League.

“We should have some pretty accomplished ballplayers on the field,” Welch said. “We’ll probably be as talented as we have been in a couple years if this thing holds true, and that’s a reason why we’re excited to get going.”

Recent players out of Janesville high school programs slated to be part of the team include McCauley Cox, Luke Malmanger, Connor Schneider and Casey Stone, to name a few. Beloit Memorial products Drew Freitag and Kevin Raisbeck are on the roster, as well.

One name to watch for is Trevor Foss. The right-handed pitcher, a Janesville Craig grad and 2013 MLB draft pick, has been practicing with the Raptors.

“We’ll have a lot of double-up weekends as this thing progresses, because we’re trying to squeeze 12 games in nine weeks,” Welch said. “So we’re pretty excited about our pitching.”

Will the games go on?

As the weekend arrives, Welch gave no indication of a possibility the Rock River League’s season will not start as planned.

With another week and strikes mounting against the Home Talent League’s plan, the situation sounds a bit more uncertain.

One reason area teams want to play is to give their supporters and community members an outlet amidst the pandemic.

“We had 12 guys show up (Tuesday) night show up for batting practice under the threat of rain ... because guys want to be together and get some swings in,” Towns said. “Our exhibition game with Utica, that was added late and we didn’t promote it ... and there were still probably 75 of 100 people show up, because they want to go do stuff.

“We played at Rio on Sunday, darn near an hour away, and several dozen people made that drive on Father’s Day.

“It’s always been our attitude, but maybe even moreso this year, it’s not only to serve our guys and give them a chance to play but to serve our community. Give a little local entertainment. Restore a little of the community camaraderie.

“What better place to do that than the ballpark?”

Frey said he did not reach out to the Jays’ potential sponsors as he normally would because of the pandemic situation. But he said many of his longtime sponsors sought him out and cut him a check anyway.

“They see me and say, ‘Here’s a check,’” Frey said. “We’ve got a strong support group in Evansville. They say, ‘Here’s our usual contribution, go play baseball.’ I tell my players how lucky they are to have backers like that.”

Even if a league season is canceled, it is likely many teams would continue to attempt to play exhibition games like they have the past several weekends.

Towns—who is on the HTL board and voted to continue with the plan to start the season July 4—said whatever happens, he will be pleased that the board explored every option in an attempt to play baseball this summer.

“This is something people want to do, and it’s at least worth trying,” he said. “If things happen, if the virus takes a turn for the worse and we get shut down, at least we tried.”