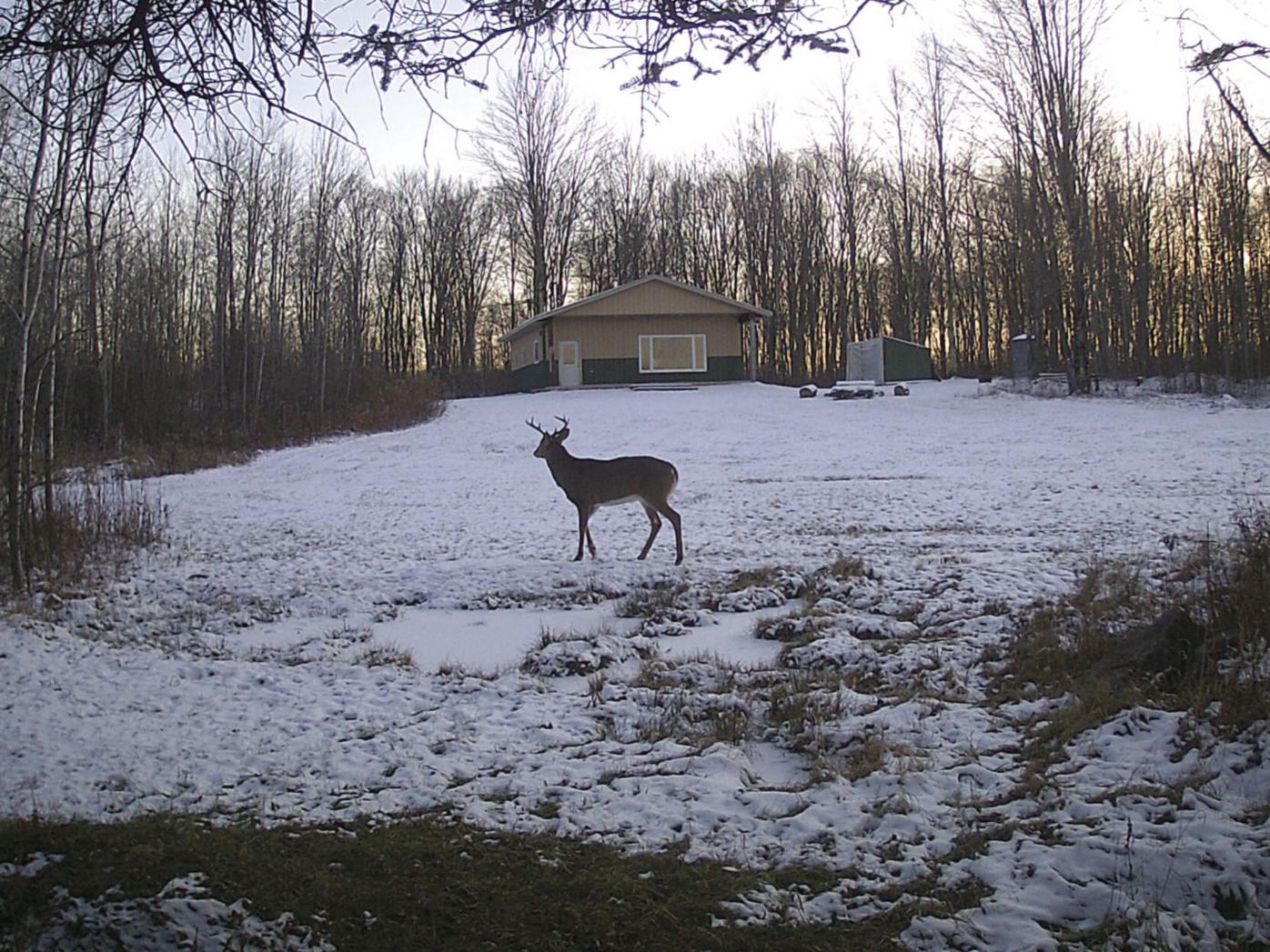 Trail cameras showed there were bucks in the area in the days leading up to gun deer hunting season. But Gazette sports editor Eric Schmoldt and his five fellow hunters never saw this deer on opening weekend. 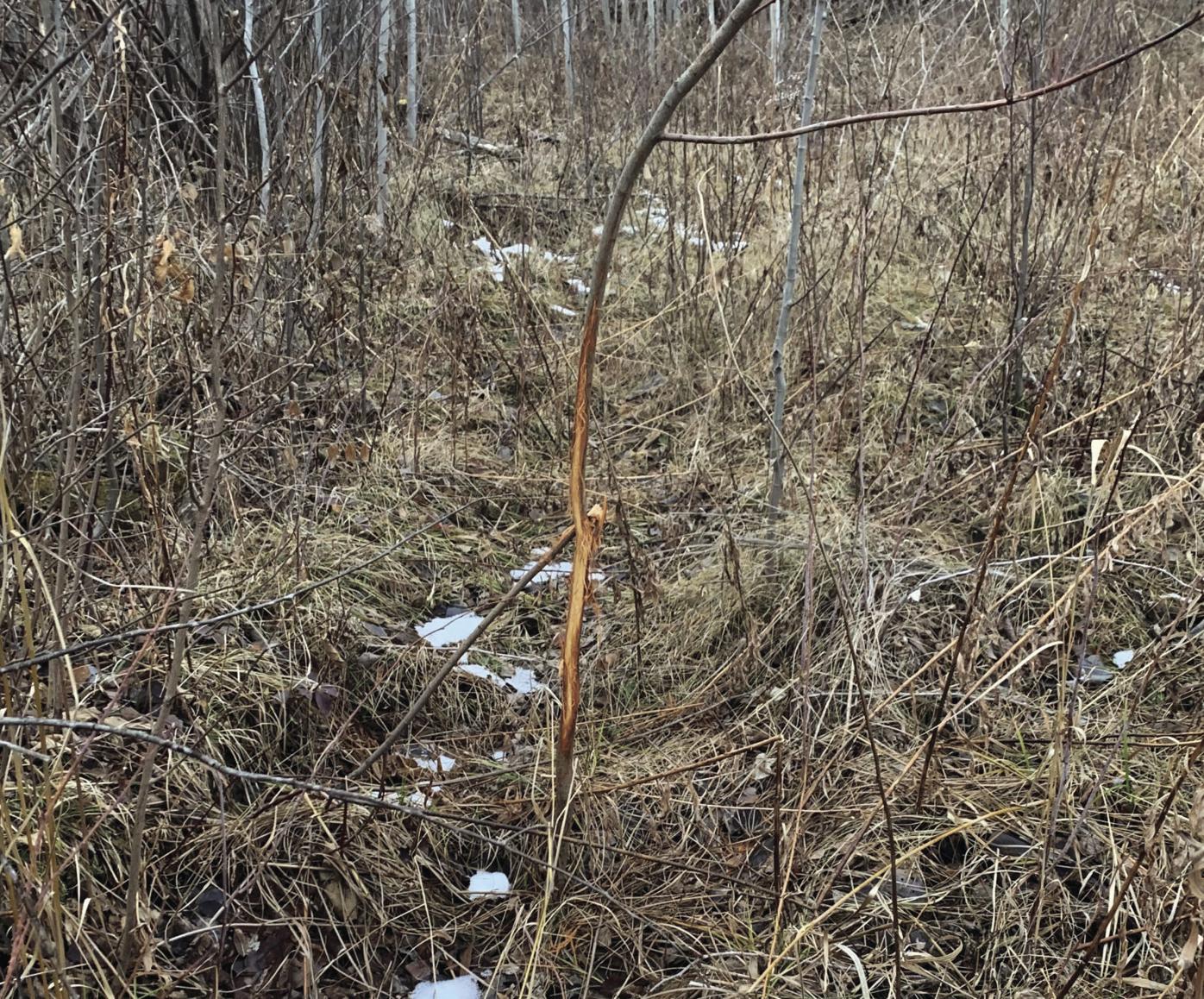 Signs of bucks, including rubs like this, littered the forest where Gazette sports editor Eric Schmoldt hunts near Winter. But the bucks were nowhere to be found on opening weekend.

Trail cameras showed there were bucks in the area in the days leading up to gun deer hunting season. But Gazette sports editor Eric Schmoldt and his five fellow hunters never saw this deer on opening weekend.

Signs of bucks, including rubs like this, littered the forest where Gazette sports editor Eric Schmoldt hunts near Winter. But the bucks were nowhere to be found on opening weekend.

More than an hour remained before sunrise, but the radio already hummed from the toasty front room of the cabin.

When you’re almost half an hour from the nearest paved road, stations with a clear broadcast signal are hard to come by. You roll with the “mix” station that comes in best and call it good.

So as six slumbering hunters rolled out of bed anxiously on opening morning of the gun deer season, one of them flipped in on the old boom box just in time to catch the final bars of a John Mellencamp song.

That’s right: As the first cups of coffee were poured, we were serenaded by none other than the rapper 50 Cent.

There is nothing more socially distant than sitting alone in the woods 20 feet up in a tree.

Hunting has got to rank up there among the perfect activities during a pandemic.

The annual traditions and camaraderie that come with the gun deer season, though? Not so much.

This was my ninth consecutive year as an invited guest to the Wissota Mud Puppies hunting camp, and that invitation is not something I take lightly. It also typically comes with an annual meetup of at least a dozen men from across the state of Wisconsin, as well as two who live in Colorado and one in Minnesota.

None of that aligns with any health department recommendations for gatherings during COVID-19. By about 10 days before the annual trek north, at least half the group had already announced they’d be taking the year off.

For my dad and I, it meant weighing the risks of joining up with my uncle, cousin and two other friends. I had in-depth phone conversations in the days leading up to our departure about how the other four guys had been living during COVID times.

We would never be able to completely eliminate the risks. But after those discussions, we—and our families—felt comfortable enough that all six of us had been living similarly and taking proper precautions.

The hunt was on.

For Uncle Paul and his longtime friend Dave, that meant keeping alive their streaks—for each of them, a 44th straight year roaming the hard woods and thornapples near the Flambeau River.

Once the six of us decided on hunting together, we did our best to forge ahead with business as usual.

A dice game typical of a Thursday night. Tree stands were checked on or installed Friday. The typical five-star meals of roasts, beef tenderloin and stuffed pork chops tasted as good or better than ever.

Cousin Matt usually builds the annual bonfire. He wasn’t there, but that didn’t keep us from stacking wood high within the fire pit.

Jim wasn’t there to provide the pickled eggs, but we somehow got by. I think I gained just four pounds this year instead of the typical eight in four days.

Brother Kevin’s absence meant half the ATVs as normal, so we all got a few more steps in.

Cheap beer and Korbel led to long and winding stories into the night.

Oh, and one other typical yearly tradition prevailed: an empty buck pole.

Return of the deer

Nine years ago in my first hunting trek to the northwoods, our party had two bucks down within the first hour of the season.

In the eight seasons since, we’ve taken exactly three bucks, and two of them were my brother and I in 2018.

As one member of a hunting party a couple parcels over from us put it, if you’ve been able to get one deer for every eight hunters over the last several years, you have been lucky.

Last year, I don’t think I even saw a deer in two days of sitting and walking.

This year was much different.

My uncle and I saw a dandy 6-pointer while scouting before sunset Friday night. He said he would bet money the buck would be in that same area the next day. I should have taken the bet.

I never saw anything bigger than a spike buck the rest of the weekend.

That’s not to say I didn’t see deer. In fact, on Sunday I saw 11 of them, but not a single one carried antlers. And since I didn’t have a license to shoot an anterless deer, all I could do was watch the show.

That same neighbor hunter hypothesized that there are more deer in the area now because the wolves have done their damage and moved on. Our trail camera said otherwise, with a wolf showing up in the footage on the very Thursday morning that we had arrived.

But all we can hope is that “Sarge” is mostly right—that the majority of wolves have moved elsewhere and the deer population is trending in the right direction.

Can I sit here and say the six of us made the right call to get together during the pandemic? Not really, no. Second-guessing is at an all-time high. I can tell you I waited two weeks to write this column, and none of us have been sick in the aftermath of deer camp.

Hopefully by next year, things have returned close to normal and the whole group is back together hunting, feasting and catching up with one another while getting off the grid.

Oh, and maybe next year the only 50 Cent in camp will be when someone makes a raise during a lively game of poker.

Something tells me when the rapper sang about a bottle full of “bub” in the club, he wasn’t referring to brandy at the hunting shack.