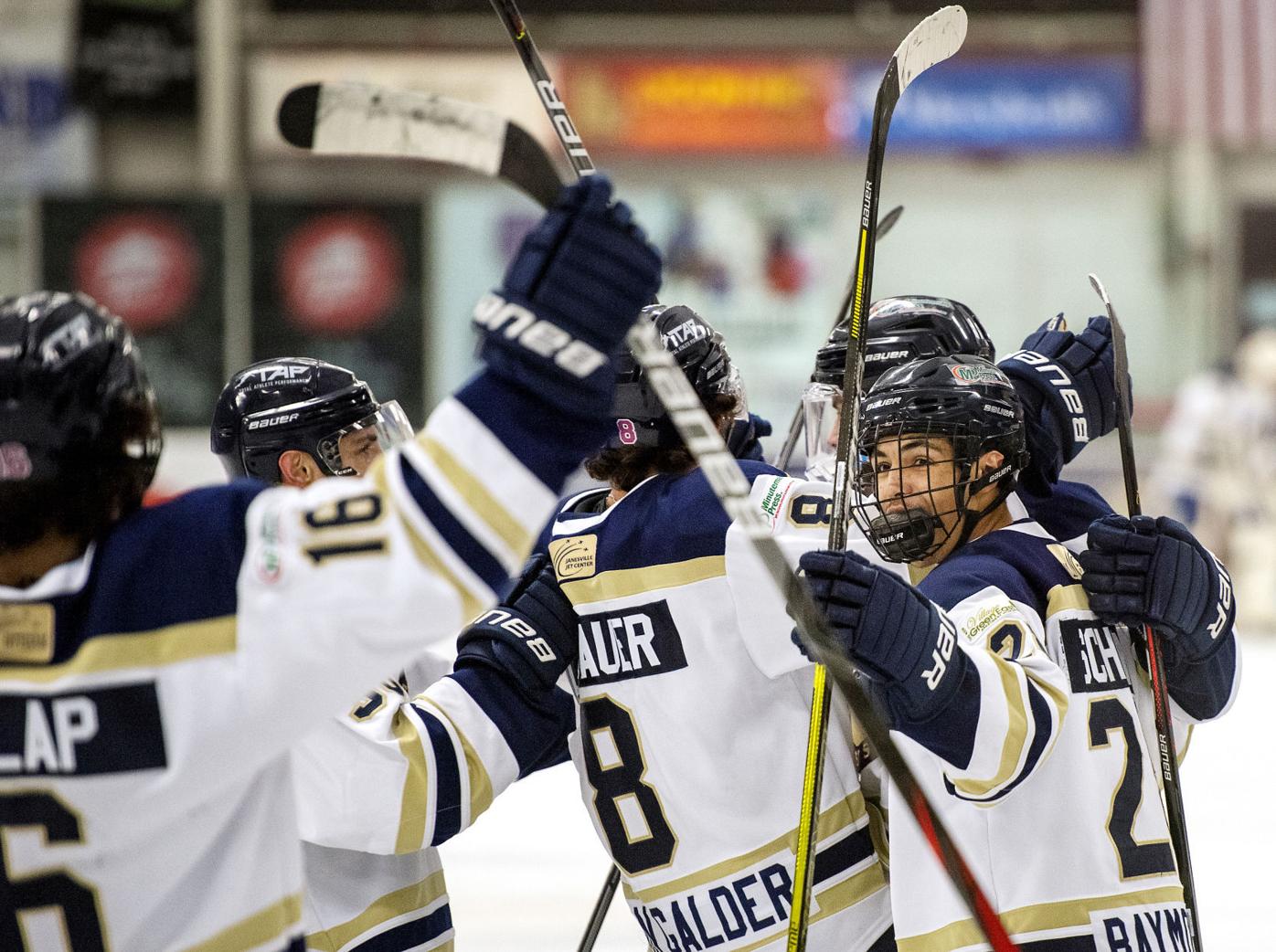 Jets players celebrate after Isaac Novak’s goal during the Jets’ game against Kenai River last December at the Janesville Ice Arena. The NAHL announced a starting date of Oct. 9 for the 2020-21 season, which is being delayed due to the coronavirus. 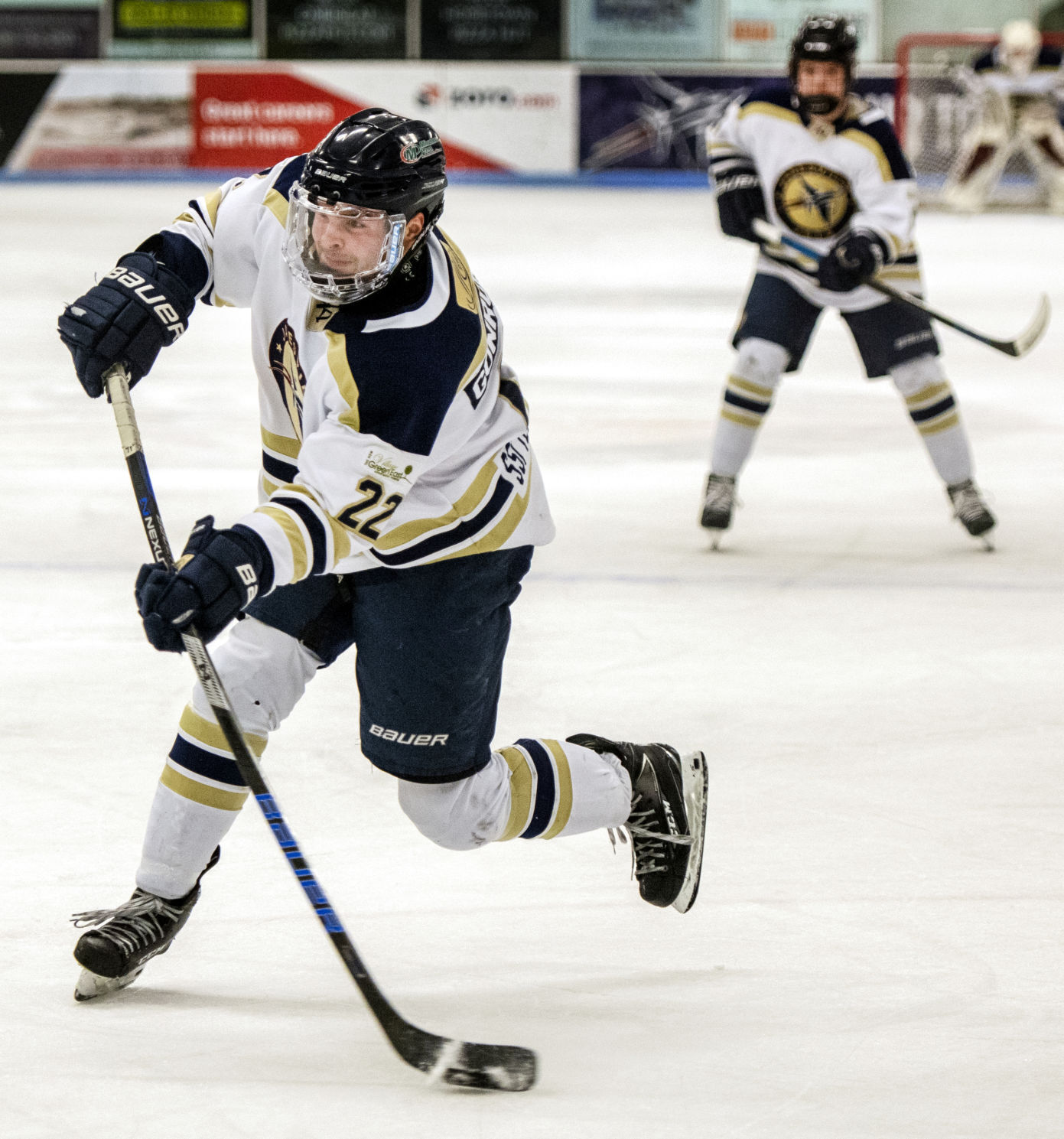 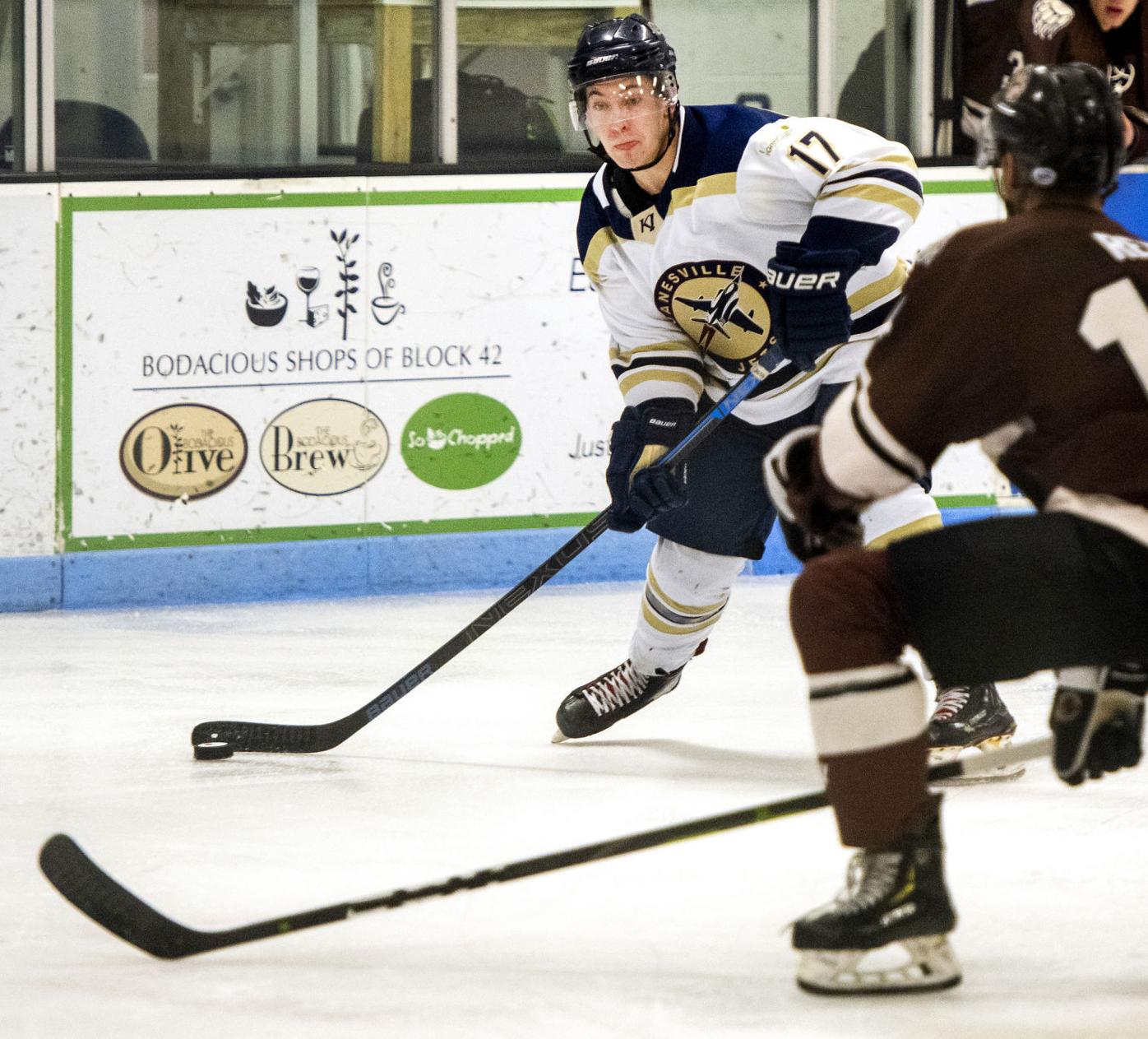 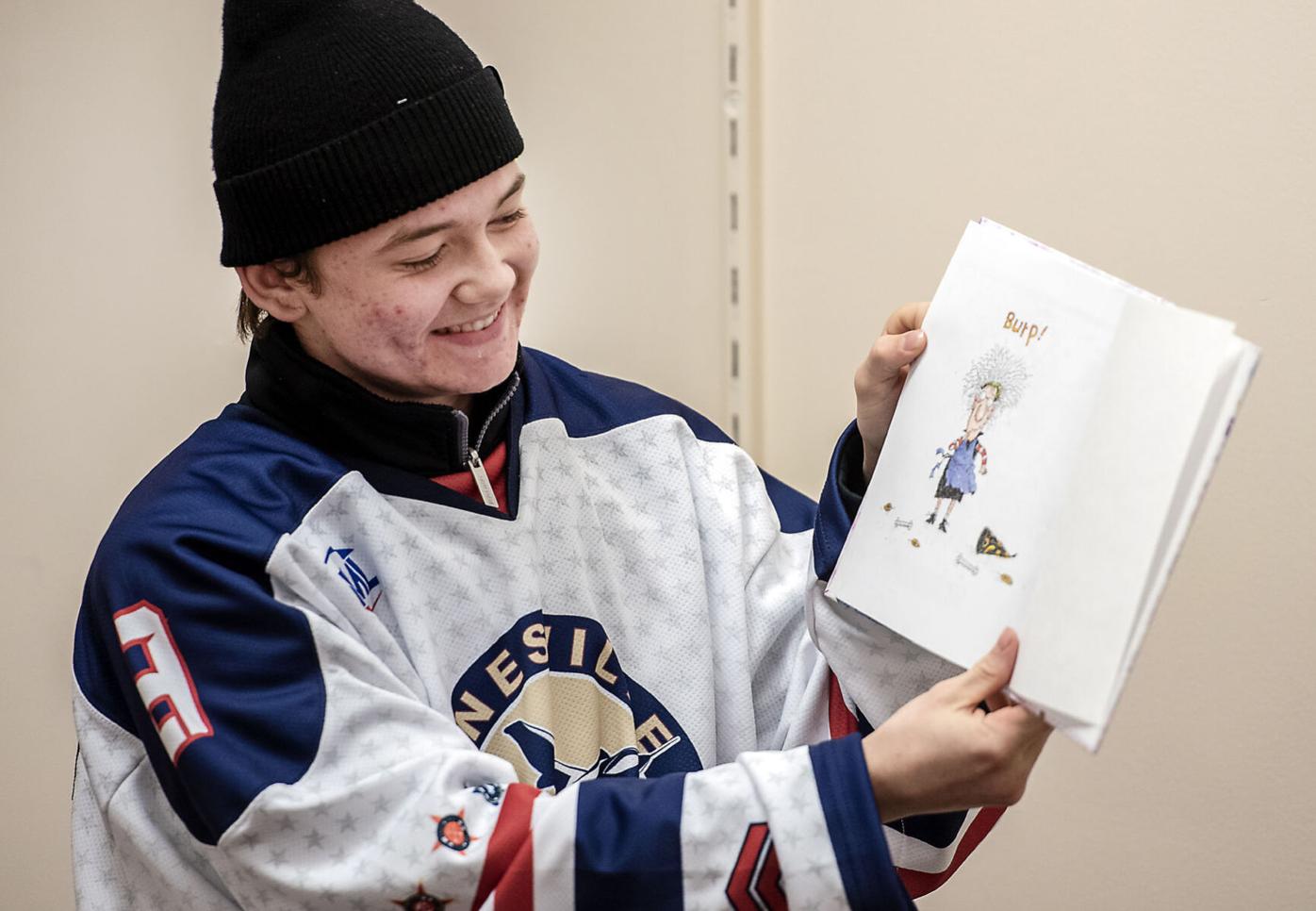 Janesville Jets player Blake Dangos reads a Halloween children’s book during story time Thursday at the HPL Express in the Janesville Mall. The North American Hockey League has yet to release a 2020-21 season schedule, but the league and Jets have indicated they plan to play beginning in October. The Jets said they will continue to find ways to serve and represent the community despite limitations due to the COVID-19 pandemic.

Jets players celebrate after Isaac Novak’s goal during the Jets’ game against Kenai River last December at the Janesville Ice Arena. The NAHL announced a starting date of Oct. 9 for the 2020-21 season, which is being delayed due to the coronavirus.

Janesville Jets player Blake Dangos reads a Halloween children’s book during story time Thursday at the HPL Express in the Janesville Mall. The North American Hockey League has yet to release a 2020-21 season schedule, but the league and Jets have indicated they plan to play beginning in October. The Jets said they will continue to find ways to serve and represent the community despite limitations due to the COVID-19 pandemic.

The North American Hockey League, including the Janesville Jets, is proceeding forward with a delayed start to its junior hockey league season.

The NAHL has not yet released an official schedule, but a press release on the league’s website Thursday indicated the regular season—which typically begins in early to mid-September—will start Friday, Oct. 9.

Additionally, Jets team president and NAHL Board of Governors Chairman Bill McCoshen sent a memo to Jets sponsors and season ticket holders last week to let them know, “The 2020-21 NAHL season will happen, and the Jets will play this year.”

McCoshen cautioned those fans and sponsors that the season will look different that the past 11 in franchise history. Along with the schedule being pushed back, McCoshen’s letter said attendance at games will be limited and that the safety of players, staff, billet families and the communities is the top priority.

First-year coach Parker Burgess said some Jets players have already started arriving in Janesville and will continue to through the final official report date of Oct. 1.

“We’re making sure when they get to camp they have a negative COVID test that is from no more than five days prior to them reporting,” Burgess said. “That’s one thing we’ve been working diligently on, the guidelines and protocols to put in place to ensure the kids’ safety and ensure that we have a season.”

Burgess said the Jets and other teams that do attempt to play their season will need to ask their players to be diligent in adhering to safety protocols.

“They maybe won’t have the freedom they would have in a normal season, when they can be a little more out and about and enjoy the community,” Burgess said. “We’re going to have to kind of create our own little mini Janesville bubble the best we can ... to limit kids’ exposure (to COVID-19) so that we don’t hit snags along the way.”

McCoshen said the Jets expect to have fans in attendance this year but that it will be limited based on local gathering requirements. He also said fans would be required to wear masks, at least early in the season, and that the bleacher seating would be redesigned for social distancing purposes.

He said the team has found and will continue to find ways to serve the community. The Jets participated in the YWCA’s virtual Walk A Mile In Her Shoes event, is donating proceeds from online jersey sales to ECHO and is working to schedule a drive-thru style food drive at the ice arena.

McCoshen’s letter said, “the NAHL board of Governors has worked very hard to put protocols in place to allow teams to operate safely this year. The NAHL is fully committed to running a season that provides our players with great competition as well as unmatched exposure events. Some teams may choose not to play ... but the Jets will play.”

Like everyone else during the pandemic, the Jets have been forced to remain flexible during an ever-changing climate.

They conducted four camps throughout the summer, including one in Janesville. They had hoped their main camp, the final one of the offseason, would be held in town last month but instead were forced to move it to Dubuque, Iowa.

“We were pretty fortunate that we know the people in Dubuque a little bit ... and were there for a camp, so they had already been through one there,” Burgess said. “That gave us some peace of mind.

“There’s a lot of moving parts to a camp before you even throw in the pandemic side of things. And then we only had a week to kind of switch everything and let the players know and get hotels set up.

“We would’ve loved to have had it in Janesville. That was our main goal. But we were presented with the challenges of having the players wear masks on the ice, that just logistically wouldn’t have been possible from a performance standpoint.

“It was disappointing we couldn’t bring the kids to Janesville and bring the town the economic kind of boom a camp can bring in. But we had to make do, and on short notice I thought we did a really good job.”

Burgess was hired to take over for outgoing head coach Corey Leivermann in early June. He called his first summer on the job during a global pandemic an emotional roller coaster.

“You get the job and you’re super excited and you can’t wait to get started and work with the kids and community,” he said. “A couple weeks later, you realize, we’re also in a pandemic, and you start hearing rumors there might not be a season. Then you go up again because you’ve got an ownership group ... that wants to do everything in their power to make sure the boys can play and get the exposure they deserve.

“You go through the highs and lows. I’m a pretty positive, optimistic person to begin with. So I’ve tried to ride that train. Right now, from a league standpoint and a team standpoint, we’re more optimistic than ever that this thing is going to get rolling.

“How it looks exactly, I don’t think anyone knows 100%. But all the messages we’ve received from the league and our ownership group have been, ‘Let’s get this thing ready to move forward.’”