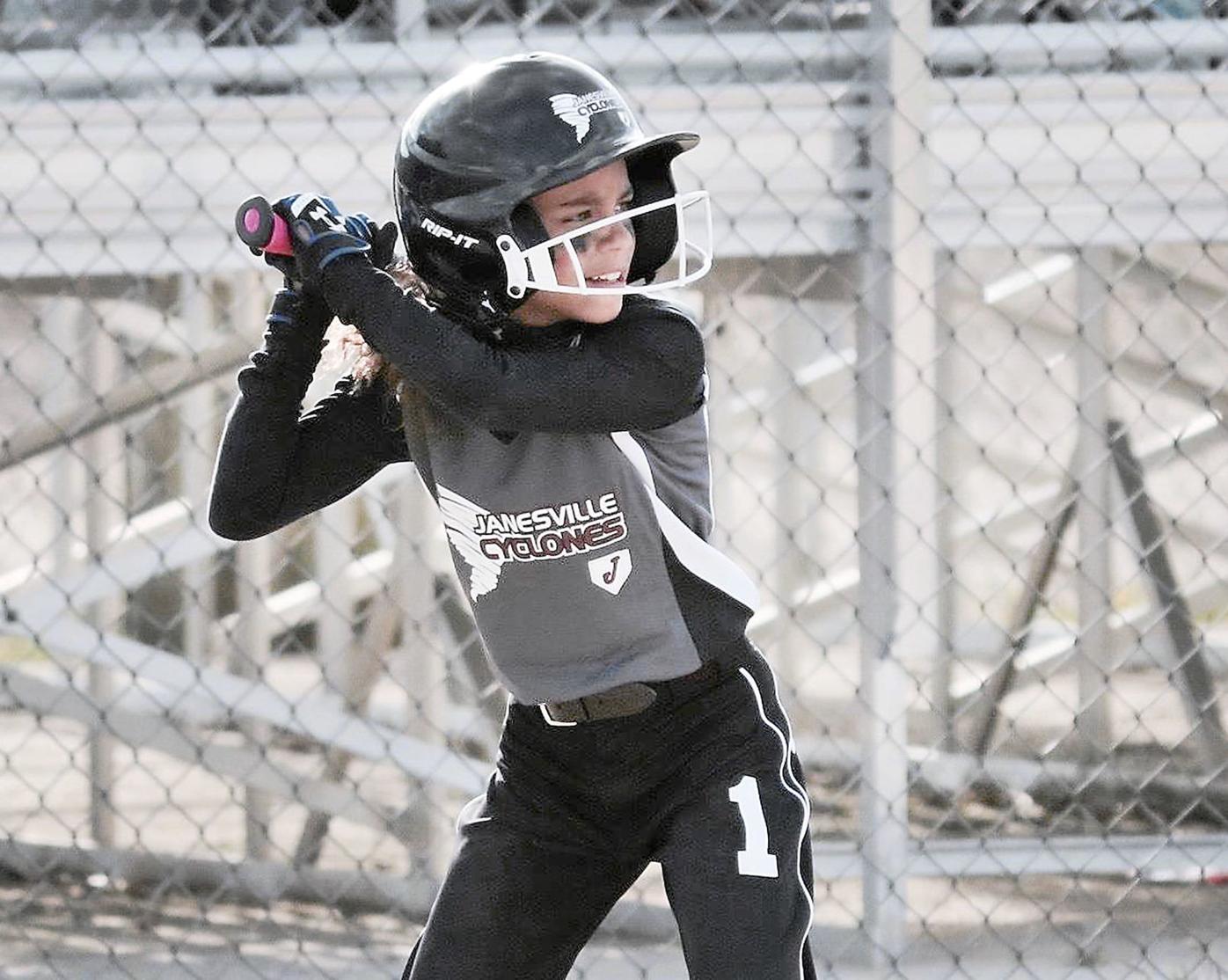 Savy Chesser-Thornton awaits a pitch as part of the Janesville Cyclones girls softball team last season. Chesser-Thorton is on the Cyclones 14U squad that will play in the North American Fastpitch Association Midwest Nationals starting Thursday in Beloit during this summer of the coronavirus pandemic. 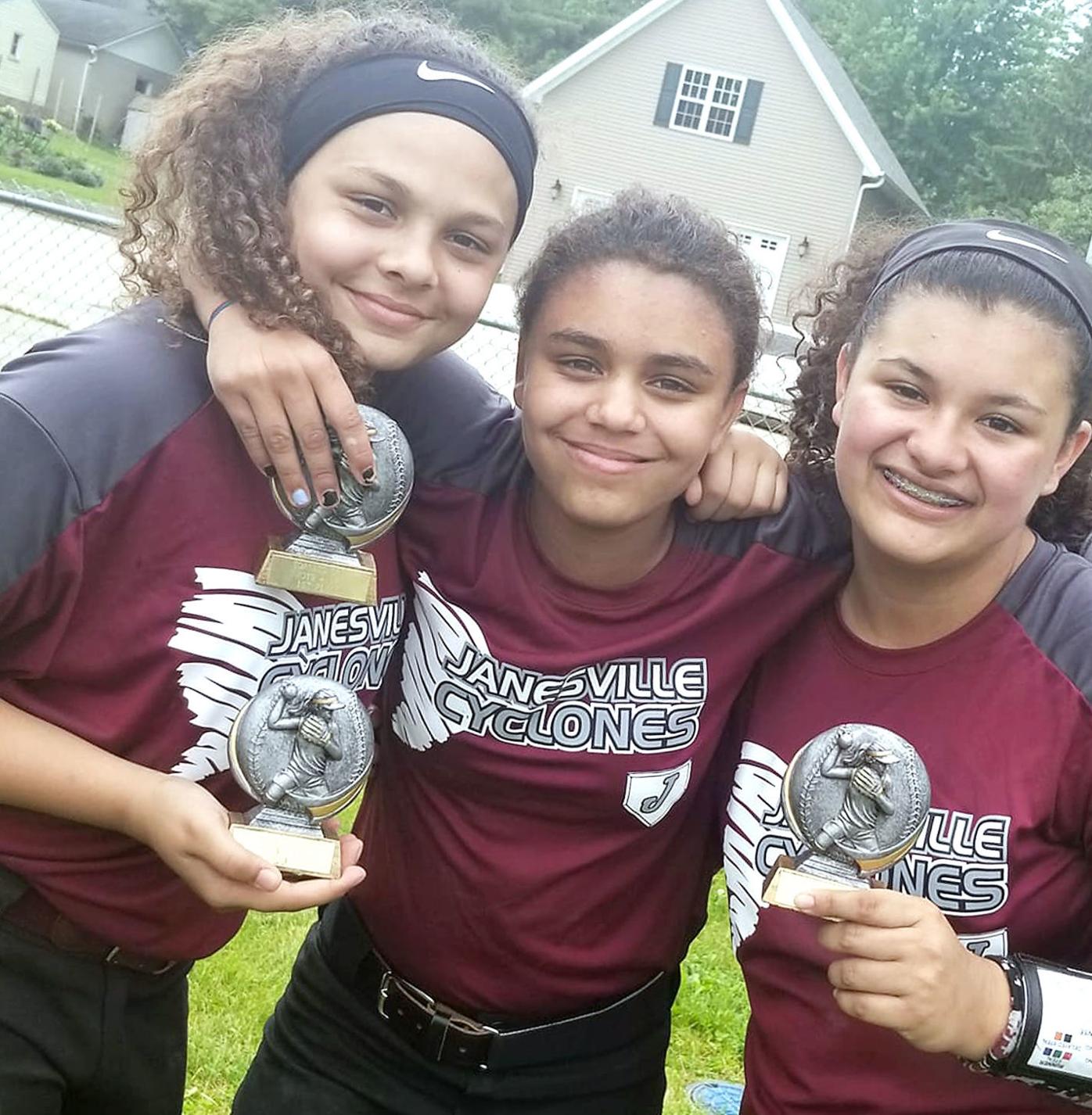 From left, Mya Eichelt, Savy Chesser-Thornton and Ava Pel show off their medals earned as part of the Janesville Cyclones 13U squad during a tournament last summer. All of them are on the Cyclones 14U team this summer, but close embraces have been reduced due to the coronavirus pandemic. 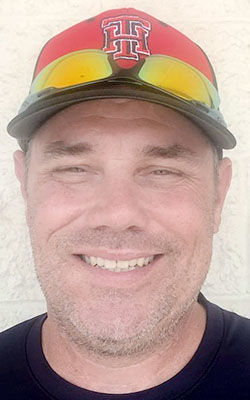 Savy Chesser-Thornton awaits a pitch as part of the Janesville Cyclones girls softball team last season. Chesser-Thorton is on the Cyclones 14U squad that will play in the North American Fastpitch Association Midwest Nationals starting Thursday in Beloit during this summer of the coronavirus pandemic.

From left, Mya Eichelt, Savy Chesser-Thornton and Ava Pel show off their medals earned as part of the Janesville Cyclones 13U squad during a tournament last summer. All of them are on the Cyclones 14U team this summer, but close embraces have been reduced due to the coronavirus pandemic.

Jason Mayer has had to remind himself of the times we are living in after the final out of his 15U girls softball team’s games this spring and summer.

“The weirdest thing to me is not shaking hands after the game,” the head coach of Team Heat said just before the Janesville-based team departed for a national tournament in Des Moines, Iowa, on Tuesday morning.

“Yeah, you wave over to the other team, but it’s not the same. I’ve had to catch myself many times on shaking hands. It’s just a natural thing to do.”

The coronavirus pandemic has changed the summer for youngsters who are usually playing organized sports. The Janesville Youth Baseball and Softball Association and American Legion baseball seasons were canceled.

Traveling teams such as the Heat and the Janesville Cyclones, a 14U girls softball team, are playing a greatly reduced schedule compared to normal years.

“This summer has been difficult, and one of uncertainty,” said Cyclones head coach Bryan Naber. “We had our tournaments planned and paid for by late winter.

“All of them have been either canceled or postponed. This forced us to find tournaments in locations that were able to host them. It was and is a scramble to find games or tournaments and do so safely.”

The national tournament that starts Thursday in Des Moines is only the fifth tournament of the season for the Heat, who are 12-3-2 on the season. The Heat played in two tournaments in the Quad Cities in Iowa, one in Waterloo and another in Lake Mills.

The Janesville Cyclones, a member of the North American Fastpitch Association, have played in just one tournament as they prepare for the NAFA Midwest Nationals event that begins Thursday in Beloit. The Cyclones are 9-4.

“This will be the biggest tournament of the year,” Naber said of the Beloit event. “By this time in a normal year, we would have twice as many games in, but we are just happy we could play.

“The girls were so excited when we got the green light to practice.”

Tournaments have a new set of rules during the pandemic.

“For the most part, they were easy to follow,” Mayer said. “We did have to provide our own balls for a couple of tournaments. That was a pain trying to keep track of which was which and dealing with someone taking off with ours after home runs.

“In other tournaments, we had to designate one person to get all of the foul balls, and sanitize them before they returned them in play.”

Other rules that have been implemented are limiting the number of players in dugouts, no sharing of equipment, constant sanitizing of equipment during games and social distancing.

“It’s tough keeping teenage girls to social distance,” Naber said. “They want to talk and be social with their teammates.”

The 15U squad is part of the United States Specialty Sports Association, an independent organization based in Florida.

Eight of the 12 players were on last year’s team, which finished seventh in the national tournament.

The team is guaranteed to play at least six games in the four-day national tournament beginning with a 9:40 a.m. game Thursday.

Eleven girls from Janesville and one from Milton compose the Janesville Cyclones.

Both Mayer and Naber are grateful their teams are able to get games in this summer. Mayer, who played organized sports while growing up in Lomira, is concerned about youngsters who were idled these past five months.

“I can’t imagine what I would have done at 14 or 15 years old had I not had a ballgame or practice on most days,” Mayer said. “Or if I had lost my senior year of sports.

“For some kids, that’s the reason they stay out of trouble, give a little more effort in school, or even get out of bed in the morning.”

At least two Janesville-based softball teams will benefit from the experience of participating in national tournaments starting Thursday—even if those games will end with waves of hands instead of handshakes.