A program and press pass from the 1993-94 first- and second-round NCAA men’s basketball tournament games at Ogden, Utah. Both UW-Green Bay and the University of Wisconsin won first-round games, which were significant for both programs. 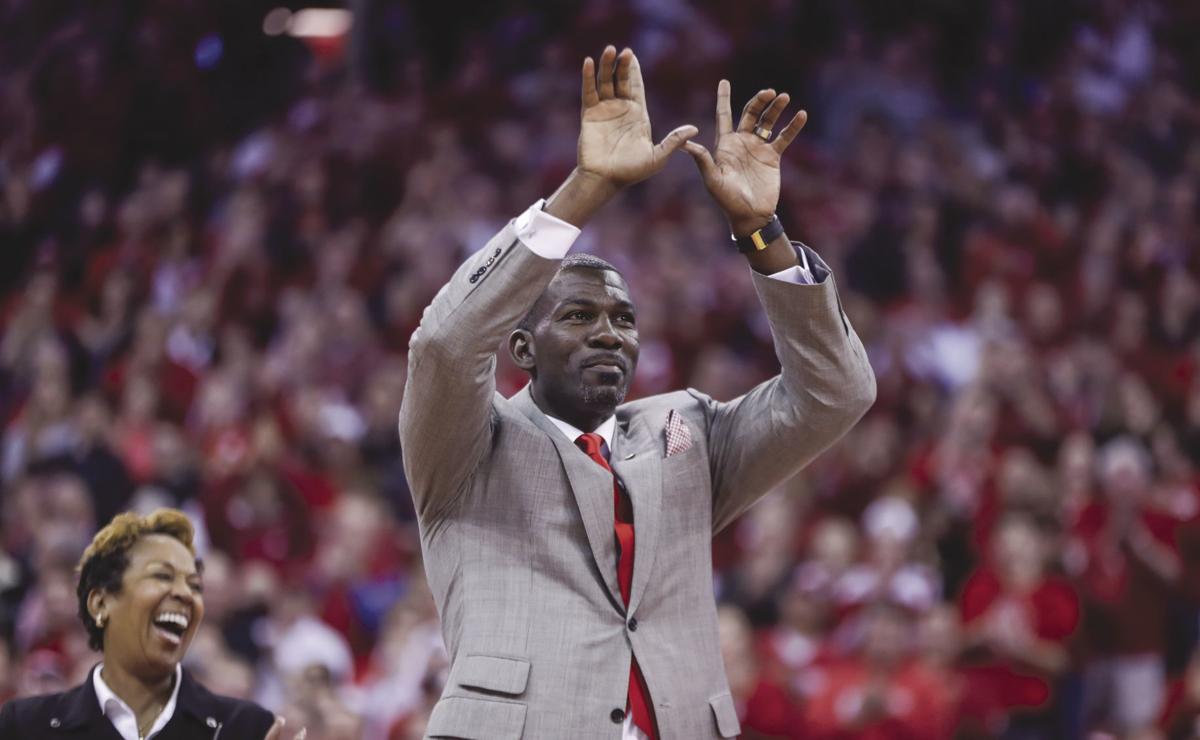 Former Wisconsin basketball player Michael Finley is honored during a timeout in an NCAA college basketball game between Wisconsin and Michigan Sunday, Feb. 28, 2016, in Madison. 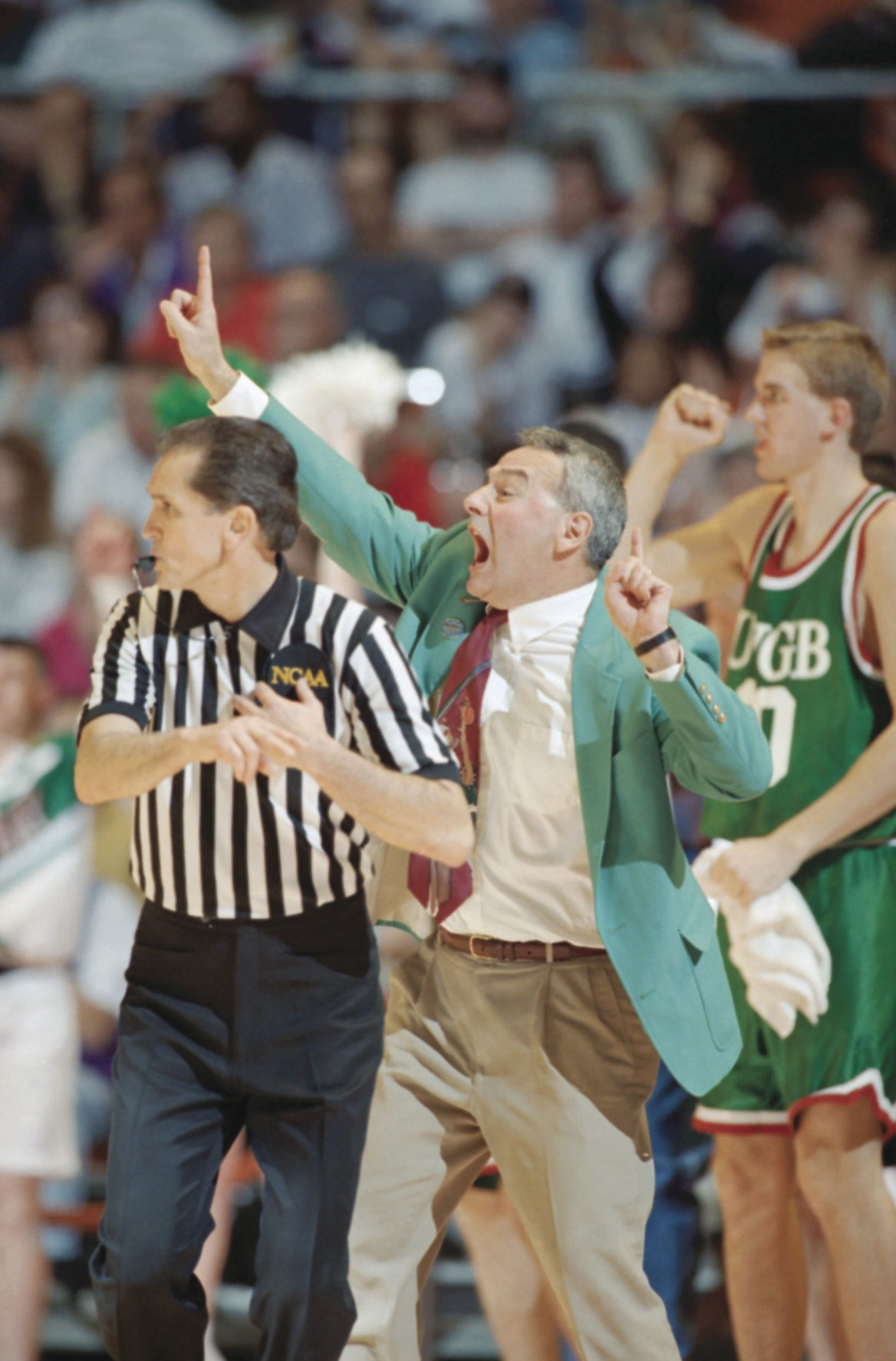 Wisconsin-Green Bay coach Dick Bennett, center, signals his team during a 49-48 loss to Purdue in the first round of the NCAA Midwest Regionals, Friday March 17, 1995, Austin, Tex. One year earlier, Bennett and the Phoenix were a No. 12 seed when they toppled Cal. Bennett later went on to coach at Wisconsin and led the Badgers to the Final Four.

A program and press pass from the 1993-94 first- and second-round NCAA men’s basketball tournament games at Ogden, Utah. Both UW-Green Bay and the University of Wisconsin won first-round games, which were significant for both programs.

Former Wisconsin basketball player Michael Finley is honored during a timeout in an NCAA college basketball game between Wisconsin and Michigan Sunday, Feb. 28, 2016, in Madison.

Wisconsin-Green Bay coach Dick Bennett, center, signals his team during a 49-48 loss to Purdue in the first round of the NCAA Midwest Regionals, Friday March 17, 1995, Austin, Tex. One year earlier, Bennett and the Phoenix were a No. 12 seed when they toppled Cal. Bennett later went on to coach at Wisconsin and led the Badgers to the Final Four.

It was the night the University of Wisconsin men’s basketball team won its first NCAA Tournament game since 1947.

And it was in the late afternoon that little-known Dick Bennett and his UW-Green Bay squad (CBS analyst Ann Meyers kept referring to them as Green Bay-Wisconsin) beat sophomore sensation Jason Kidd, future NBA All-Star Lamond Murray and the University of California.

Both games were played at the Dee Events Center in Ogden, Utah. And I was in the second row courtside.

Looking back, that was the Wisconsin program’s phoenix rising from the ashes.

And it was the Phoenix from Green Bay kicking ash—and maybe the beginning of the now popular No. 12 seed beating a No. 5 seed in the first round of the tournament.

The Badgers hadn’t even been invited to the NCAA Tournament in 46 seasons. Back in 1947, there were eight schools in the tournament. The tournament began March 19 and finished March 25. Seven days.

In 1994, just getting a bid was a huge accomplishment in the minds of Bucky fans. Compare that to modern times when Badger faithful growl that the coach should be fired if the team fails to earn a bid.

But Bennett, the UW-Green Bay men’s basketball coach, was giving Mike Holmgren some competition for most popular coach in the city. The 1993-94 UWGB squad entered the NCAA Tournament with 26 wins, which marked the fourth season in five that the Phoenix had surpassed 24 wins in a season.

Adding to the local interest of the Phoenix in the tournament was a Janesville Craig High grad, Ben Berlowski, who was a sophomore guard on Bennett’s squad. Berlowski averaged 7.1 points, 2.1 rebounds and 1.2 assists as one of the first reserves off the bench.

I remember driving the rental car from the Salt Lake City airport to Ogden, a 40-mile trip into a city of 80,000 that sits among the Wasatch Mountains. The scenery was amazing.

What happened the next day, Thursday, March 18, was just as eye opening.

It was St. Patrick’s Day, which in Mormon-dominated Utah is no big deal.

In the first game of the day at the Dee Events Center, Syracuse beat Hawaii.

The Rainbow Warriors’ main team color was green, but there was no St. Patrick’s Day magic for the squad that had been on the mainland for two weeks for the WAC Tournament and subsequent tournament bid.

Then the green-clad Phoenix took the court to play California, and the St. Paddy’s Day fun began.

The UWGB players were confident they could beat the Pac-10 runnerup. The Phoenix were 26-6. The team had opened the season in the Great Alaska Shootout with a 74-69 loss to Glen Robinson-led Purdue. Robinson would be the No. 1 overall pick of the NBA Draft later that year by the Bucks.

The Phoenix then beat North Carolina State 76-45 and lost to Wake Forest and freshman Tim Duncan in overtime 61-58.

So the Phoenix players weren’t pie-eyed when they took the court to play in the school’s second-ever NCAA tournament game.

“I think Dick Bennett would tell you that that was one of his best teams, because everyone from 1 through 12 could play,” Berlowski said of the UWGB squad in a recent phone interview. “We had a lot of confidence we could play with anybody.”

From press row, I had never witnessed anyone run as fast as Kidd up close—and this was while he was dribbling a basketball. But the future NBA star and later Bucks head coach—along with Murray—was stopped by UWGB’s defense and deliberate style.

“Jason Kidd was a man among boys,” Berlowski said. “He was unbelievable. He took a shot right before half from the top of the key, missed it and (the rebound) went baseline. And somehow, he got to it and got another shot off.”

Berlowski laughed about the play more than 26 years later.

Gary Grzesk, a 6-4 sophomore guard out of Wauwatosa, used his all-state soccer footwork skills to keep in front of Kidd.

The Phoenix were up 47-29 with 15 minutes left when Kidd and the Golden Bears awoke. I still contend that Kidd made the decision to ignore whatever second-year head coach Todd Bozeman was telling him and just go at it.

Cal went on a 22-3 run to take the lead 51-50 with UWGB’s Grzesk and Eric LeDuc on the bench with four fouls apiece. Murray had seven of his 18 points in the run.

The Bears still led 56-55 with 2:44 left, but Bennett had just what he wanted: a possession-by-possession finish going up against Bozeman.

Jeff Nordgaard gave UWGB a 59-57 lead with a 12-foot jump shot with 35 seconds left off an inbounds play that Bennett had saved for the end.

Kidd missed a 3-pointer, and the Bears fouled John Martinez with 13 seconds left. With Berlowski and the rest of the bench gripping each other’s hands, Martinez made both free throws.

A Murray 3-pointer missed its mark. UWGB 61, Cal 57. The Phoenix were the Cinderella darlings of Ogden.

“Back then, the mid-majors were the underdogs,” Berlowski said. “That’s when the 5-12 (upset matchup) started to come around.”

On the way to the postgame press conference, I passed Bozeman slumped against the wall outside the California locker room, the knot of his tie loosened to mid-chest.

A few hours later, it was the Badgers’ turn to shine after Missouri beat Navy in the first game of the night session.

In his second year as head coach, Stu Jackson had led the Badgers to a 17-10 record, including an 8-10 mark in the Big Ten. The nationally recognized Jackson had jump-started a dormant Badgers program, bringing in one of the nation’s most sought-after freshman, 6-foot-11, 265-pound Rashard Griffith from Chicago.

Getting Griffith to come to Madison was a feat that was unheard of at the time—the Badgers had only eight winning records during the previous 40 seasons.

Along with rising junior forward Michael Finley and solid senior guard Tracy Webster, the Badgers were showing signs that they were no longer going to be perennial bottom-division finishers in the Big Ten.

Cincinnati, the No. 8 seed, played the rough-and-tumble style taught by its fiery coach, Bob Huggins, and was led by Dontonio Wingfield, a 6-8, 240-pound freshman. Wisconsin, the No. 9 seed, countered with the massive Griffith.

Just as UWGB did that afternoon, Wisconsin grabbed the early lead. The Badgers were up 21-9, and Huggins was stomping and calling timeouts on the sidelines.

“We were fighting uphill all the way,” Huggins said after the game.

Wisconsin led 49-38 before the Bearcats rallied, just as California did against UWGB.

Cincinnati took a 58-57 lead, but Finley scored on a three-point play to put Wisconsin up for good.

Finley was just blossoming into the talent that would make him the 21st overall pick in the 1995 NBA Draft, which began his 17-year pro career.

Jackson, who had been named coach of the New York Knicks at age 33 in 1989, saw Finley’s ability early in his first season as head coach in Madison.

During a booster night at the then Cherry’s Steak and Prime in Janesville in the fall of 1993, Jackson related a story of a practice session early that season. Finley had hit the floor, and Jackson urged a manager to hustle over to check on his condition.

“That’s a million dollars laying there,” he recalled saying.

Jackson showed his New York brashness the next day when he told media that the Big Ten was the toughest conference in the nation. A couple of players from Missouri, the team Wisconsin faced in the second round, smirked when Jackson’s comment was mentioned.

University of Wisconsin basketball coaches did not make waves back then. Jackson had a refreshing brashness about him.

Alas, the good times for both state teams ended with their second-round games that Saturday.

“They played a 2-3 zone and were athletic,” Berlowski said.

With the Phoenix back to within four points at 61-57, Berlowski faked a jumper and drove baseline. Syracuse’s Otis Hill moved in front of him, and both crashed to the floor as Berlowski’s layup went in.

But veteran official Lenny Wirtz whistled Berlowski for an offensive foul and disallowed the basket.

“It came down to one tough call,” Berlowski said. “Otis Hill slid way underneath me. The basket should have counted for sure. (Hill) even got up and laughed about it. ESPN played it over and over again.”

Berlowski did hit two free throws with 17 seconds left to get Green Bay to within three points at 62-59, but his 3-point attempt with 5.3 seconds left was blocked—the Orangemen’s 11th block of the game—ending UWGB’s season.

Many things changed after that weekend in Ogden.

Two years later, Bozeman was forced to resign as California head coach. When Bozeman reduced the playing time of one of his players, the player’s parents turned Bozeman in to the NCAA for funneling $30,000 to them for travel expenses.

Jackson also left for the NBA. He became the general manager of the expansion Vancouver Grizzlies. One of Jackson’s assistants, Stan Van Gundy, was named the Badgers’ next head coach.

Van Gundy coached only one season and was replaced by … Dick Bennett.

Bennett and then Bo Ryan set the UW program down a path that was unimaginable back in 1994, including eventually going to two straight Final Fours.

It was Jackson, however, that started it all.

UWGB has not sustained the success Bennett delivered in the 1990s. Grzesk, who has been head coach at St. Norbert College for the past 14 seasons and is 274-86, was thought to be a frontrunner for the vacant UWGB head coaching job recently.

But Grzesk took his name out of the running, and UWGB hired Will Ryan, son of Bo, as its new coach earlier this week.

Looking back, those few days in Ogden, Utah, were a revelation for Wisconsin basketball. Add in Marquette’s first-round 81-59 victory over Southwest Louisiana in Jacksonville, Florida, on that Friday and the state teams went 3-0 in the first round.

I got to see two of those wins from courtside. It was a St. Patrick’s Day weekend I’ll never forget.