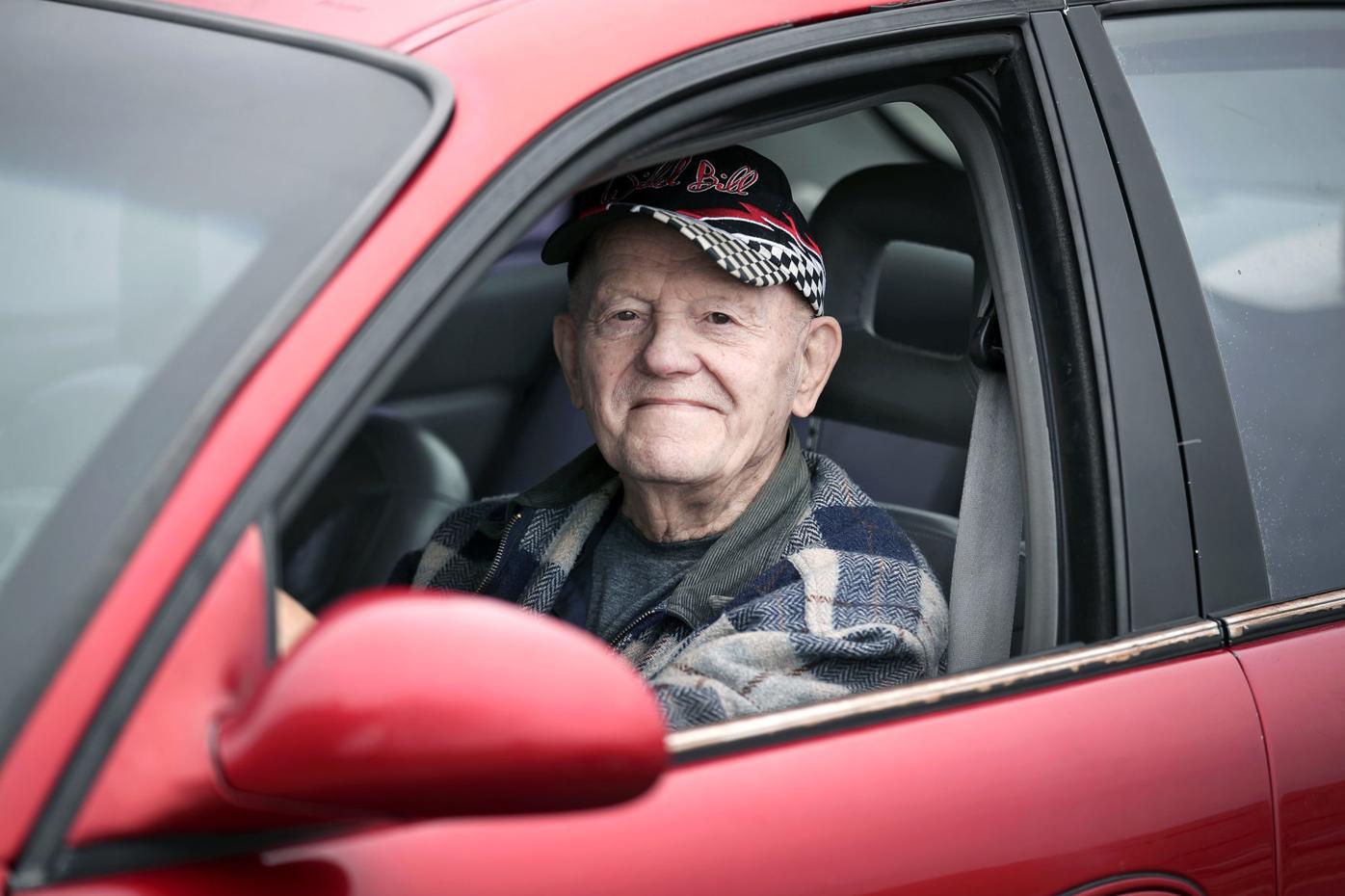 Beloit resident Bill Thiering, 86, is a mild-mannered driver behind the wheel of his 1999 Buick, but in the 1960s and 1970s he ruled the Rockford Speedway and other area demolition derbies manuevering 1951 and 1952 Lincolns and 1948 and 1949 Packards into other competitors’ vehicles. He was also the man to beat in figure-8 racing. 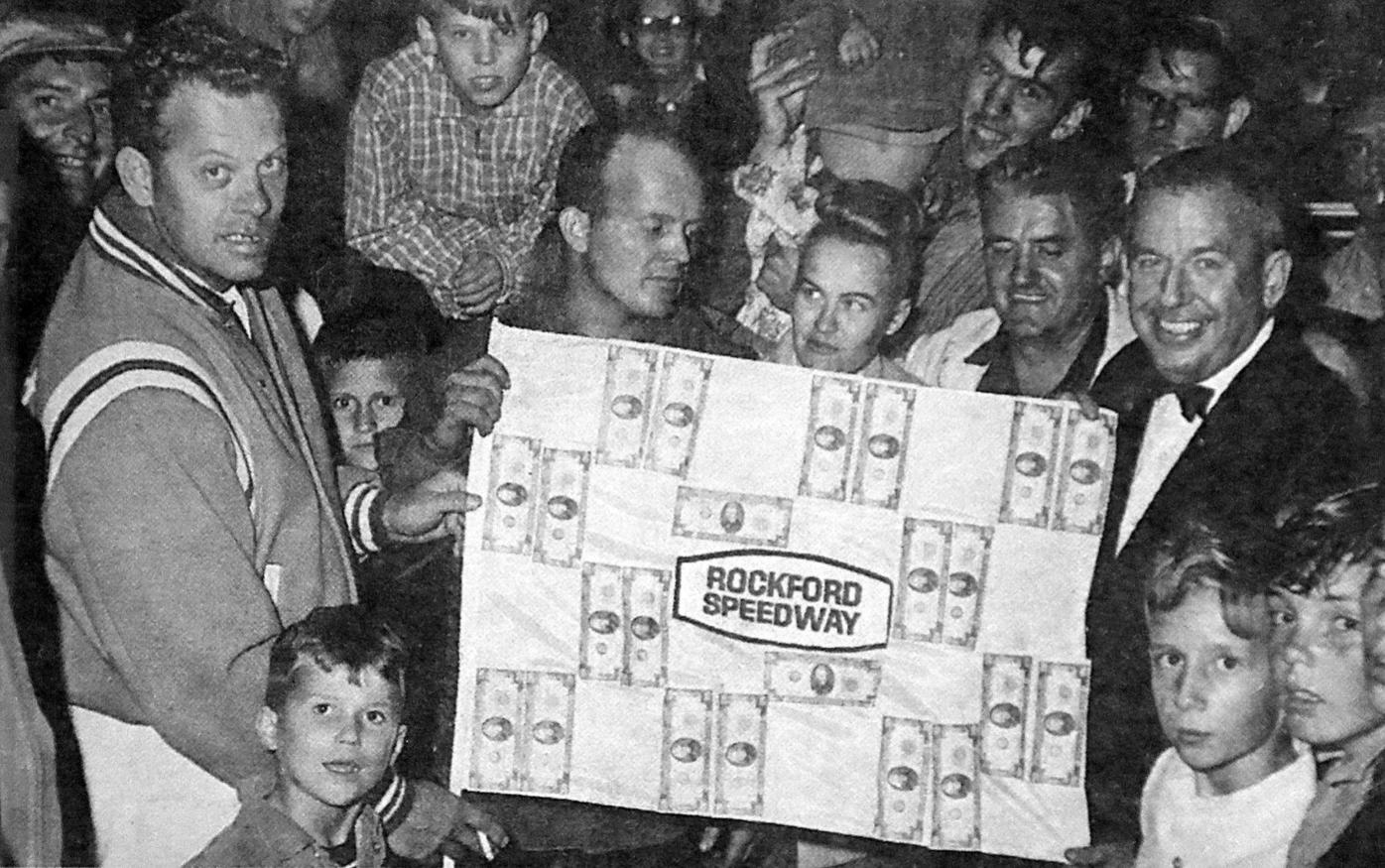 Bill Thiering holds up a poster plastered with $1,100 in prize money presented by Rockford Speedway owner Hugh Deery, right, after a race there in the 1960’s. 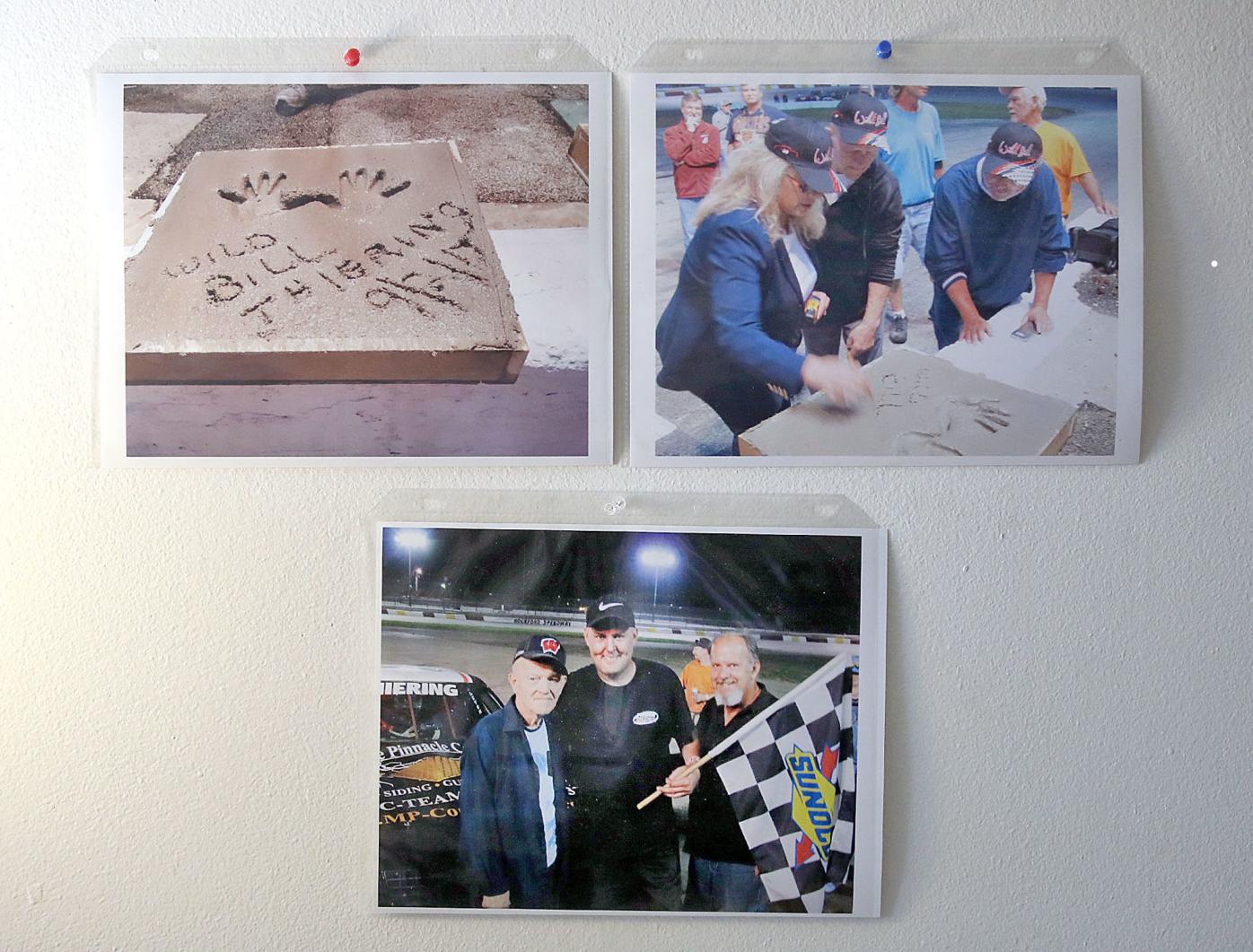 Several photos on display inside Bill Thiering’s home from when he was honored at the Rockford Speedway in 2017.

Beloit resident Bill Thiering, 86, is a mild-mannered driver behind the wheel of his 1999 Buick, but in the 1960s and 1970s he ruled the Rockford Speedway and other area demolition derbies manuevering 1951 and 1952 Lincolns and 1948 and 1949 Packards into other competitors’ vehicles. He was also the man to beat in figure-8 racing.

Bill Thiering holds up a poster plastered with $1,100 in prize money presented by Rockford Speedway owner Hugh Deery, right, after a race there in the 1960’s.

Several photos on display inside Bill Thiering’s home from when he was honored at the Rockford Speedway in 2017.

Demolition appears to be in Bill Thiering’s blood.

The 86-year-old Beloit resident made his living taking down buildings in Beloit, Janesville and Monroe.

On the side—he had 10 children to feed—Thiering would buy and sell cars, and some of the bigger models with $20 to $50 price tags on them, he would purchase and enter into weekly demolition derbies at the Rockford Speedway.

In addition, he would enter figure-8 races—events that would have up to 35 cars maneuvering their way around a course shaped like the number 8—with no traffic lights at the intersection.

Between his driving skills and knowledge of some inside advantages—think New England Patriots—Thiering ruled the Rockford Speedway in these specialty races that attracted large crowds to hear the crunching of metal and sometimes led to fisticuffs among the participants afterward.

“Whether you were wrecking buildings or junking cars, there was a lot of money in that,” Thiering said. “That’s all I was after my whole life. It was money. I didn’t care for hard work.”

Thiering bought a crane, a couple trucks and crawler loaders at auctions and started TNT Wrecking.

“You don’t buy new trucks to wreck buildings,” he said.

He took down the old Labor Temple on South Franklin Street in 1974. People could fill their pickup trucks with salvage bricks for $10.

“You got paid damn good for tearing down buildings,” Thiering said. “Nobody wanted to do it.”

And after he got out of his crane with the wrecking ball by day, Thiering often would jump behind the wheel of some car he had just bought and go to work wrecking other cars at night.

It all started when Thiering’s good friend, Kenny Branson, was putting in a stick shift transmission on a Buick in the early 1960s. He told Bill he needed someone to drive it in the demolition derby at Rockford Speedway. The first-place check was $500, and he would split it with the driver.

That’s all Thiering—who had a houseful of children—needed to hear, although he needed Branson to explain what a demolition derby was.

“I had never been to Rockford Speedway,” he said. “I didn’t know anything about demolition. But back then, ($500) was a lot of money.”

Armed with the knowledge that the winner was the last car able to move, he ventured to the Rockford Speedway in Loves Park.

With many of the competitors having hit happy hour beforehand, Thiering used his driving ability and common sense to stay out of danger. He won that first race.

He became the man to beat. He was banned from some tracks.

His knowledge of engines gained repairing his work equipment helped give him an advantage when it came to preparing the jalopies he entered in demolition derbies.

“When you get hit in the front, that big fan tears your radiator right up,” he said. “So I took a torch and cut the blades off the damn fan.

“Second is motors will run hot by themselves, but if you fill the crankcase with water and put a couple of gallons of water in the oil, my motor would stay cooler longer.”

“And we would cut a big square out of a rubber inner tube and put it over the distributor,” he said. “Because when your radiator blows, all that water goes over your distributor.

“So I guess I cheated a little,” Thiering said. “I don’t know. No one else thought of it.”

Thiering also knew what cars to use.

“And as soon as you hit them, bam, you would get the heck out because someone else is headed for you.”

Thiering then advanced to Figure-8 racing. “Wide World of Sports” showed the Figure-8 World Championship from Islip Speedway in Islip, New York, for 20 years, starting in 1964. Thiering competed there and also at the Word Championship in Langhorne, Pennsylvania, but his home was the Rockford Speedway.

Back then, Figure-8 racing involved up to 35 vehicles, attempting to maneuver around the small track and avoiding the unavoidable collisions at the center of the 8.

“You knock your headlights out; you knock your taillights out, and you get your car out there,” Thiering said. “You go buy a car for $20 or $50, whatever.”

On those small Figure-8 tracks, 35 cars lined up would take up about half of the track. Even if you were in the lead, you would often run into the back end of the trailing cars.

“You would hit the back bumper of someone—not hard—and you would hear the crowd roar,” Thiering said.

And the crafty driver had some tricks for Figure-8 racing, as well.

“You’d get close to the front, and it don’t take long to push somebody into oncoming traffic,” he said. “You’d hit the brakes, and there would be a big pileup. Hell, there would be six to eight cars in the intersection all piled up.

“Then you’d weave your way through.”

And more often than not, Thiering would eventually weave his way to victory.

All the victories put Thiering into the Rockford Speedway’s Wall of Fame.

Would he like to do it one more time?

“No,” Thiering said. “If you look closely, there’s a big yellow streak down my back.