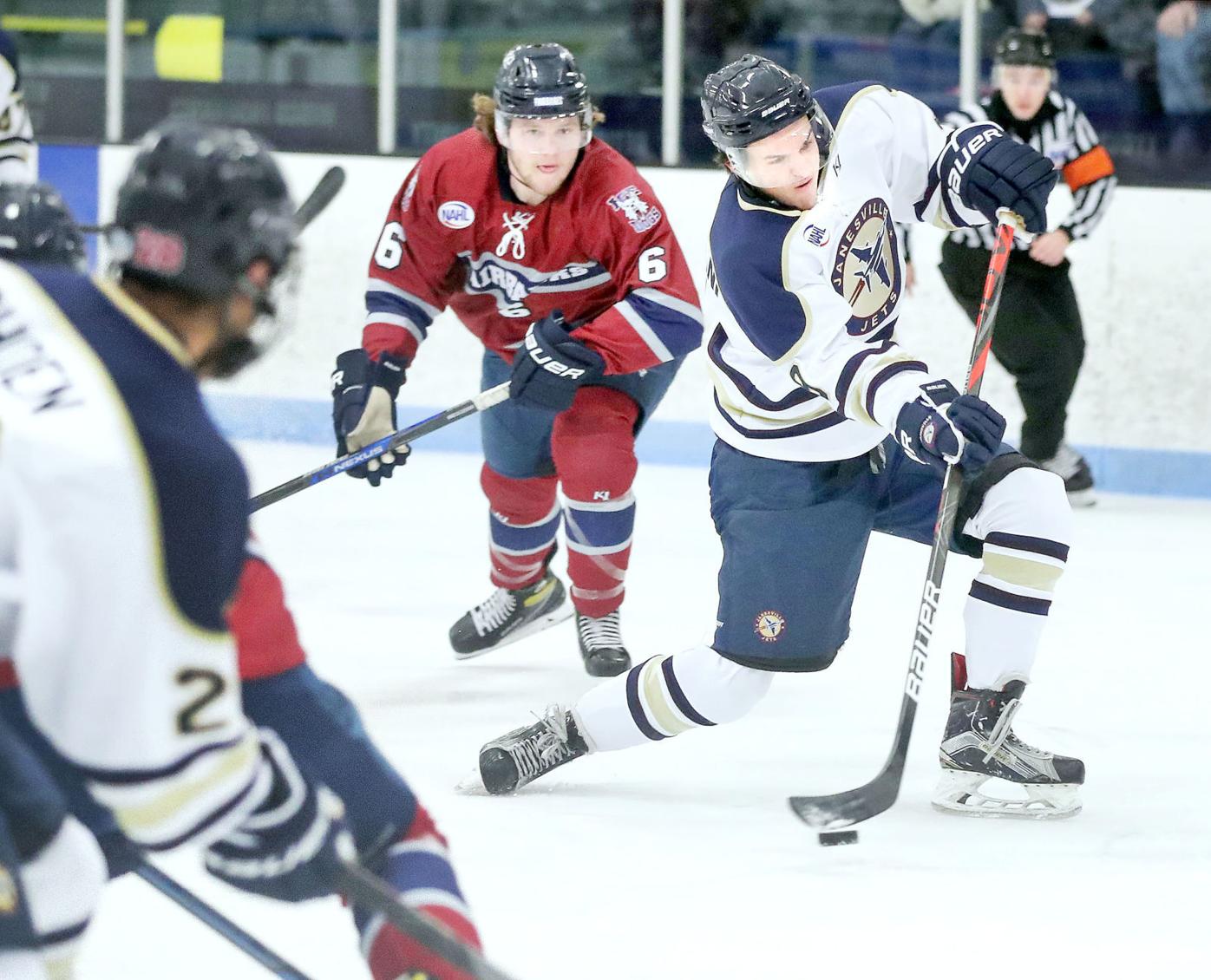 Janesville forward Cade Destefani scores on a shot in the first period during the Jets’ season opener against Fairbanks at the Janesville Ice Arena on Thursday. The 19-year-old New Hampshire native scored four goals and had three assists in the Jets’ two-game sweep. 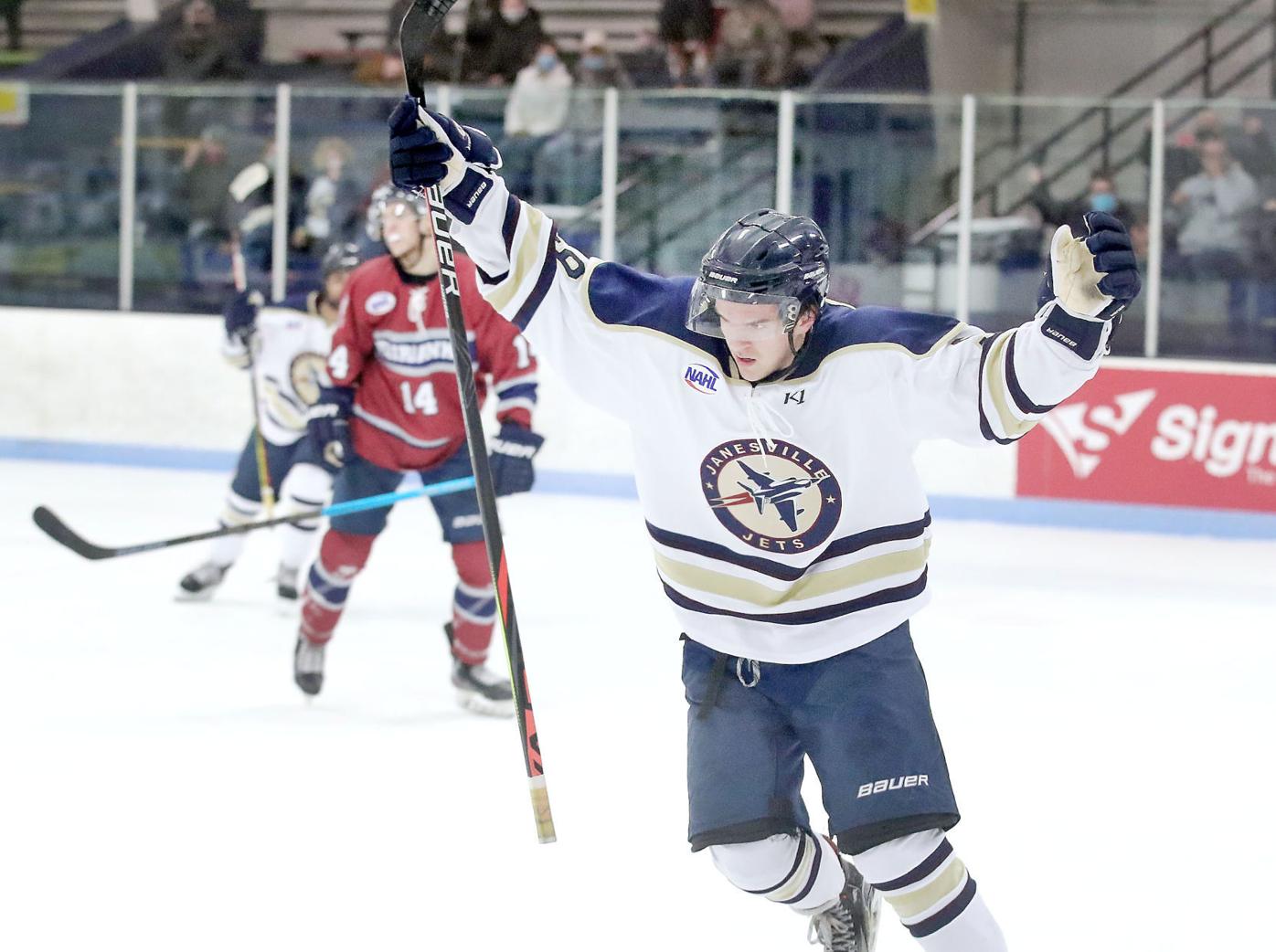 Cade Destefani scores his second goal in the first period of their season opener against the Fairbanks Ice Dogs in Janesville on Thursday, Nov. 5.

Janesville forward Cade Destefani scores on a shot in the first period during the Jets’ season opener against Fairbanks at the Janesville Ice Arena on Thursday. The 19-year-old New Hampshire native scored four goals and had three assists in the Jets’ two-game sweep.

Cade Destefani scores his second goal in the first period of their season opener against the Fairbanks Ice Dogs in Janesville on Thursday, Nov. 5.

The 19-year-old from Bedford, New Hampshire, spent much of the past two seasons playing for the Northern Cyclones out of Hudson, New Hampshire. And even when he got his feet wet playing a dozen games in the North American Hockey League last year, his Northeast Generals team was based about 90 minutes from his hometown.

After one weekend of games in his new home away from home, Destefani is settling in just fine.

He scored four goals and added three assists to lead the Janesville Jets to a a series sweep of Fairbanks last Thursday and Friday. On Monday, he was named the NAHL Midwest Division star of the week ahead of this weekend’s road series against the Austin Bruins.

“I played junior hockey the past two years and have always been living at home with my family, so moving out here was tough,” Destefani said. “But everyone here has made it feel like home, so I’m really happy I made the jump.”

The Jets are thrilled, as well.

The team’s front office first saw Destefani at a camp in Dubuque, Iowa, during the offseason. First-year Jets head coach Parker Burgess said Destefani caught the team’s attention to a point where they wondered how he had gone undrafted.

“We were really impressed,” Burgess said. “He was a free agent, and he wasn’t at our main camp because he was out east at that time. But we said, ‘Come to training camp,’ and he’s been here, and we’ve just knew right off the bat he’d be an offensive force and really good player.”

Destefani said after a phone conversation with Jets general manager Joe Dibble coming out of the Dubuque camp, the decision to come to Janesville was a fairly easy one.

With the Jets still needing to make cuts to finalize their roster, they played two very different lineups against Fairbanks in the first two games. But the top line went unchanged, with Destefani centering it between Long Island University commit Justin Thompson and Arizona State commit Charlie Schoen.

“We (the line) have been playing together the last couple weeks, starting in practice,” Destefani said. “They’re just really good players, so it’s easy to play with them.”

“It was awesome being able to have two pretty much different lineups come in and get two points each night in high-scoring games shows we’re going to be a pretty solid team this year.”

Destefani’s four goals put him in a tie for eighth place in the NAHL. Everyone else with at least four goals scored at this point has played in at least six games.

“Cade’s kind of a shoot-first guy, and I think he’s got one of the better shots in the league,” Burgess said. “It’s heavy, it’s deceptive and it gets off quick. And then he plays with guys like Charlie and Thompson right now who are really skilled playmakers. So as long as he’s getting open, they’re going to get him the puck.”

A pace of two goals and 1.5 assists per game certainly is not sustainable. But it was a wildly successful start for Destefani and the Jets offense to open the season.

“I’m just hoping we get to play a whole season and there’s no hiccups with this pandemic,” Destefani said. “As a team, I hope we can just click together well and make a run at a Robertson Cup.”