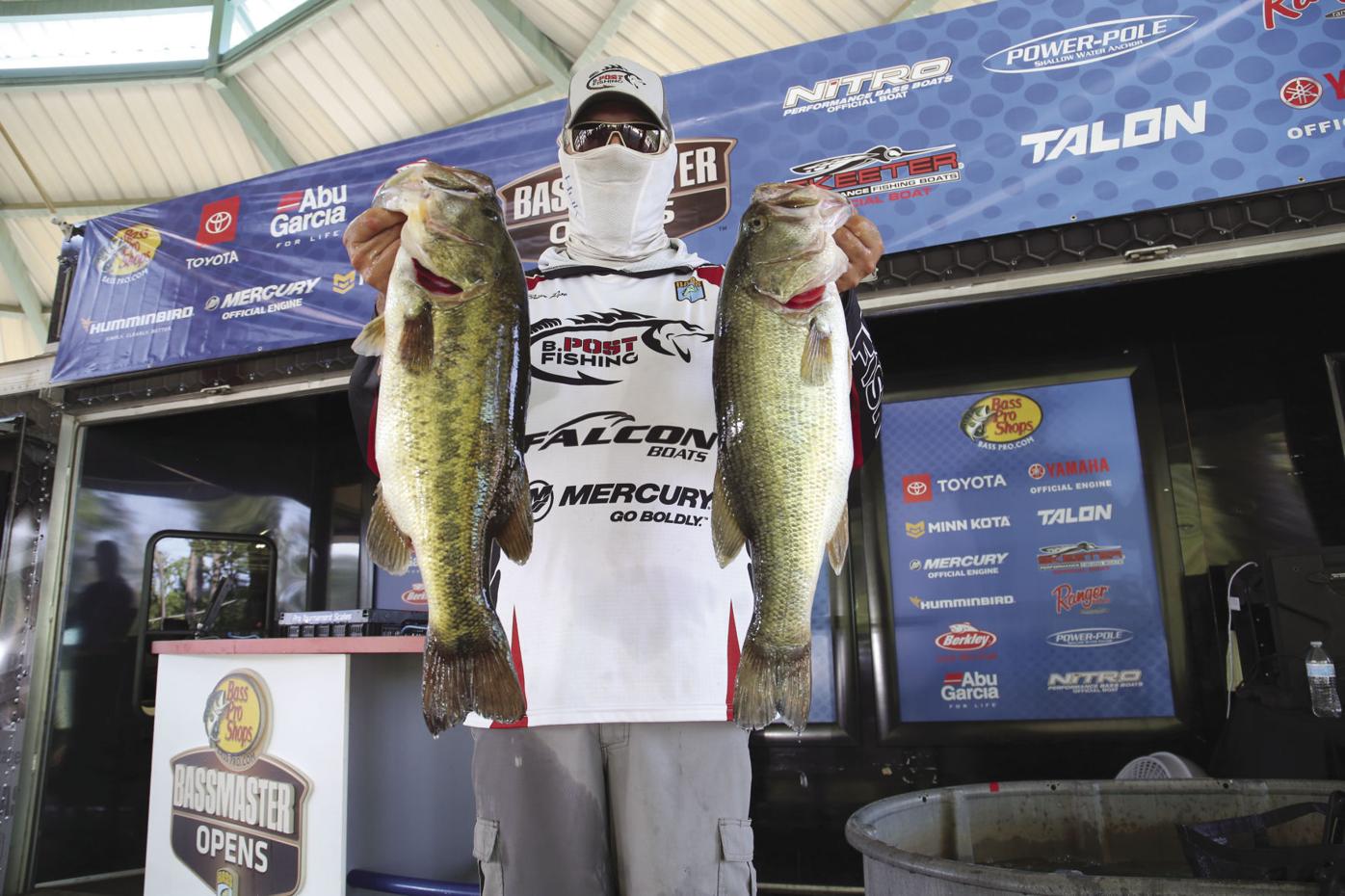 Janesville's Brian Post holds up two of the five fish he caught on Day 1 of the Bassmasters Open on Thursday in Jasper, Texas. The two six-plus-pound bass helped him to a first-day total over 20 pounds and carried him to a 12th-place finish out of 215 pro anglers. 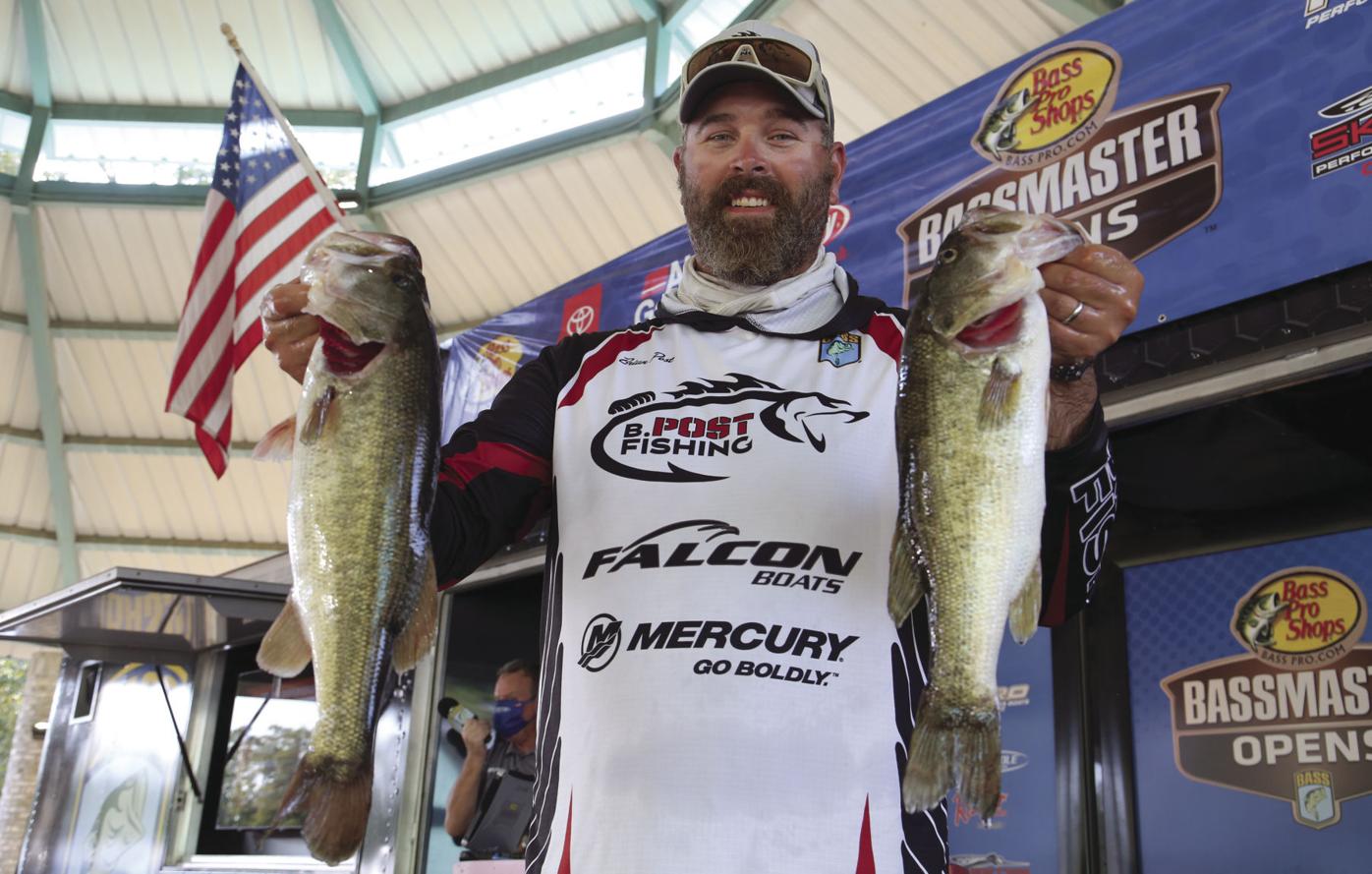 Janesville's Brian Post holds up two of the five fish he caught on Day 1 of the Bassmasters Open on Thursday in Jasper, Texas. The two six-plus-pound bass helped him to a first-day total over 20 pounds and carried him to a 12th-place finish out of 215 pro anglers.

In June, the Janesville resident made his Bassmaster fishing tournament debut by competing in an Open tournament on the Arkansas River.

When he didn’t make the top 12 fisherman out of 192 entrants, missing out on the final day of fishing, he vowed he would make it in his second attempt.

“I’m not going to be on the outside looking in,” Post told The Gazette in July. “I’m going to do whatever I need to, work as hard as I need to, to make sure I make the final day.”

Fishing in his second-ever Bassmaster Open tournament, Post made the final 12 out of 215 fishermen competing on Sam Rayburn Reservoir out of Jasper, Texas.

“Close to 100 of them are from Texas, and there are a lot of guys that I follow on YouTube and Bassmasters and everything else that were in that tournament, and some of those guys I topped,” Post said.

“It’s amazing. I really was definitely the underdog going in.”

It didn’t take long for the tip and that legwork to pay off in the tournament.

“Tournament morning I got a decent draw ... ran about 25 miles to the other end of the lake, and the one (brush pile) I wanted to start on, there happened to be nobody on it,” Post said. “I pulled up and caught a 3-pounder, followed shortly by a 6.5, which is the biggest fish I’ve ever caught.

“I had another brush pile marked about a quarter of a mile away that I could see no one had hit yet, so I went over there and caught another 6.5-pounder. That definitely got the mood right. I got settled down and locked in and just went to work from there.”

After the first day of fishing Thursday, Post found himself in sixth place. Those two big fish helped him post a five-fish weight total of 20 pounds, 1 ounce.

Friday’s second day had him stressing a little bit. A couple of fish Post caught later in the day helped him increase his bag size to 14 pounds, 11 ounces, which was good enough to leave him in ninth place and secure his spot among the top 12 and into the final day of fishing.

“I knew I was out of fish, so to say, I knew I would struggle to get my limit, so my goal was just to put five fish in the boat and come in with my head held high that I managed to put a limit in each day,” Post said. “I accomplished that.”

Post’s five fish on the final day weight in at just over nine pounds, dropping him to 12th place. Post earned just over $5,000 for his efforts in the tournament. The winner, Masayuki Matsushita, took home over $50,000.

More than the money, though, Post qualifying for the final day validated that he and his wife, Rachael, had made the right decision to go all-in on tournament fishing and compete in Bassmasters events in 2020.

For comparison, in two tournaments, Post has caught 53 pounds, 2 ounces worth of bass. Swindle, who has competed in 279 tournaments since 1995, has a career total weight of 8,946 pounds and 7 ounces.

“I was pretty hard on myself after the first tournament, because I was on the right fish ... to get a check, and I made a couple mental errors,” Post said. “After this one, it definitely calms my nerves going into the next one. It’s just, you made the right decision, you didn’t push your luck too early in your fishing career. It’s time, and now let’s get it done.”

With a Championship Saturday appearance now on his resume, Post is adjusting his goals and reaching higher once again. The final two Central Region Opens are at Neely Henry Lake in Alabama next month and Lewisville (Texas) Lake in November. Strong showings in those two events could set him up for 2021.

“On the way home, Rachael and (fellow fisherman) Brady (Farrell) were discussing that after the first tournament, I was 110th in points, and I jumped 75 places and am now 35th,” Post said. “They take the top five to the Elite Series. So if I get my game together for the last two, I have a shot at it.”