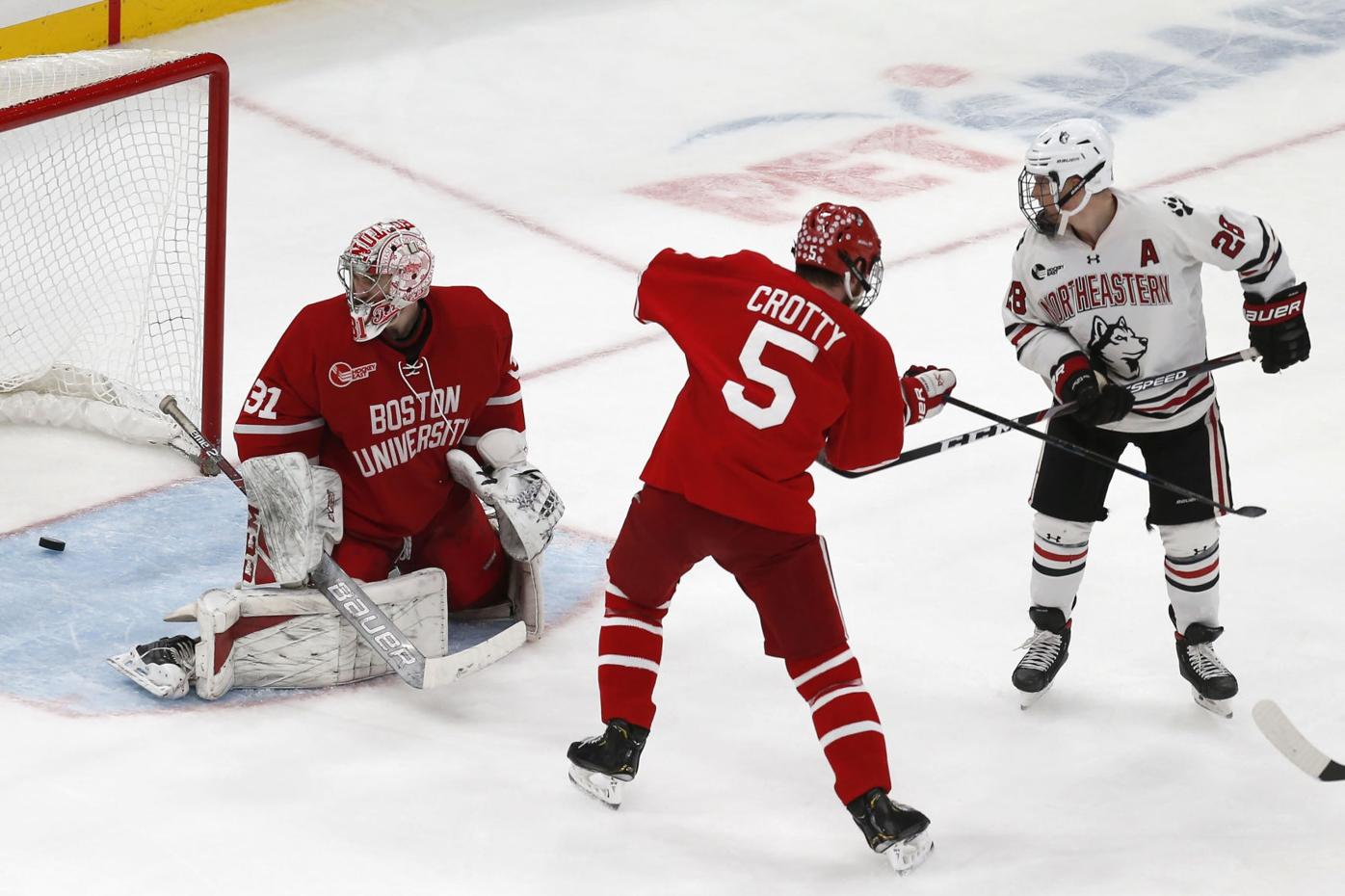 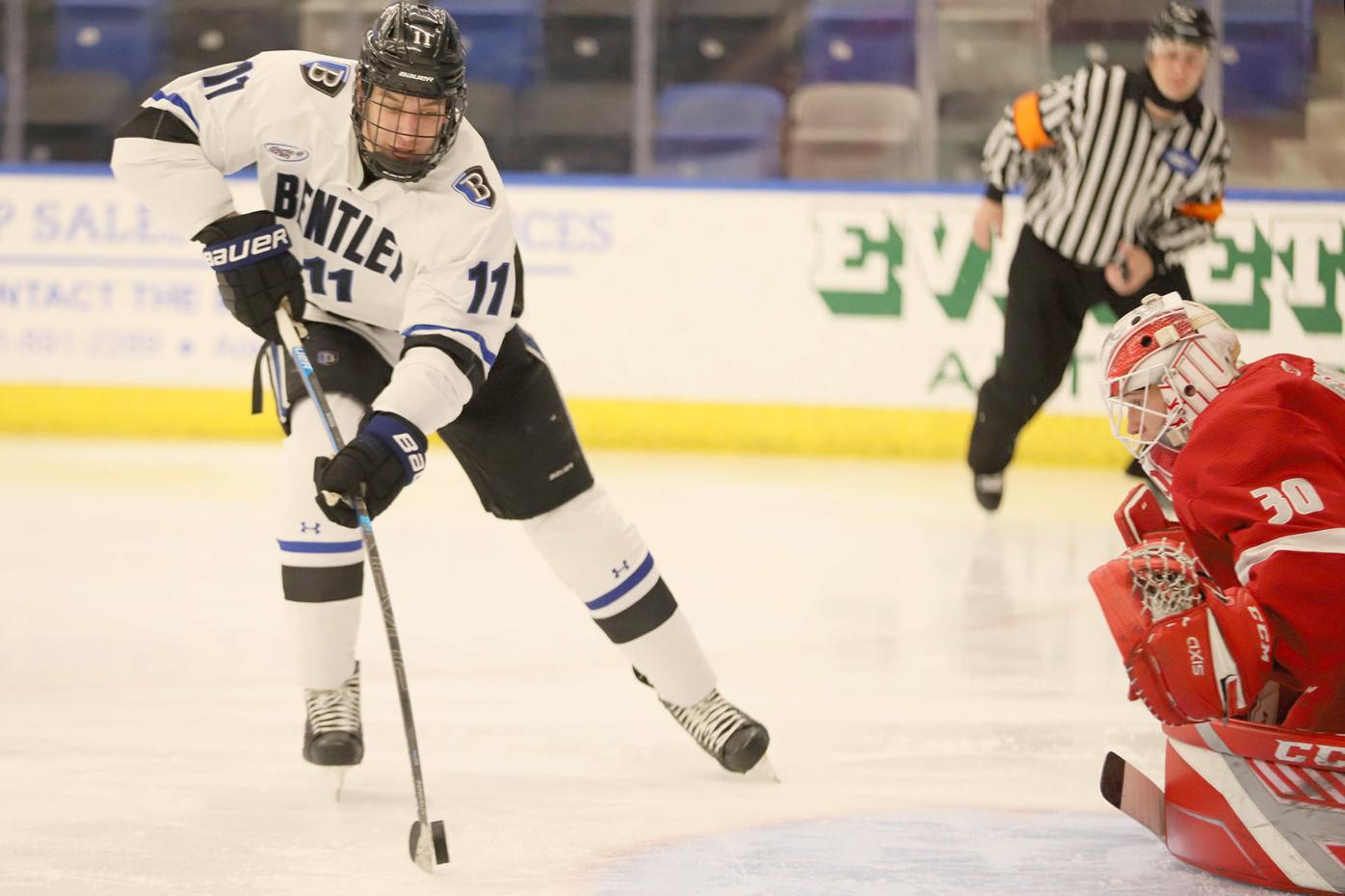 Bentley University's Jakov Novak, a former player for the Janesville Jets, is a nominee for the Hobey Baker Award, given to men's college hockey's top player.

Bentley University's Jakov Novak, a former player for the Janesville Jets, is a nominee for the Hobey Baker Award, given to men's college hockey's top player.

He could not yet legally drive a car, but he assumed as he began a stint with the North American Hockey League’s Janesville Jets that he was on the fast track to playing for a Division I college program.

“I was just a kid, and I was really immature,” Solow said. “I was only 15, and when I saw myself not in the lineup, I started asking, ‘Why am I not playing?’

“They were just like, dude, you’re not playing U16 anymore, you’ve got to grow up. (Former head coach Joe) Dibble and (former assistant coach Erik) Largen, they were yelling at me that I needed to have work ethic all the time.

“To have those guys teach me, talk to me, not play me, hard punishments to get their message across, it made me grow up so fast. It’s the best thing that ever happened to me.”

Six years later, Solow might be the biggest success story for a Jets team that continues to have an increasing number of them.

“It’s pretty remarkable, from the North American league, when you have three players like that,” said Dibble, who coached all three of the players and is currently the Jets’ general manager. “Especially considering the roles they have right now. Solow is a captain, LaFontaine is an assistant captain, and Jakov is probably on the road to being a captain, as well.

“And yet watching those guys, and the paths they’ve taken, they’ve all been a little bit different.”

Novak’s college career appears to be running somewhat parallel to his time in Janesville.

When the Jets finished with the NAHL’s second-best record in 2016-17, Novak scored 11 goals and added 17 assists in 52 regular-season games and added one goal in nine playoff games. The next year, though, he scored 32 goals and had 41 assists in 56 games in the regular season and had 10 more points in eight playoff games.

Novak went off to Division I Bentley and in his first season in 2018-19, he had just seven goals and eight assists in 37 games.

He finished with 16 goals and 14 assists in 35 games last year, and he has six goals and seven assists in 14 games this year.

“I think each year is a stepping stone. First year, coming in, I had a different role than I had in Janesville. So Year 2 was just building on that,” Novak said. “Coming in, starting off, you’re just trying to get used to school, opening up and becoming a college player. And now it’s opening up and being looked at as one of the guys to score.”

Novak said he is honored to be a Hobey Baker nominee, especially alongside two former Jets.

“It’s a privilege to be on that list. I relish that I’m considered one of the top players,” said Novak, a junior who was a seventh-round pick in the 2018 NHL Draft by the Ottawa Senators. “It’s an honor to be on that list, and especially with the other players I played with. It makes it (Janesville) such a prestigious program. The number of players that went on to play Division I hockey there is just incredible each year.”

The Jets continue to be one of the premier teams in the NAHL—a Tier II junior league—when it comes to advancement to the Tier I USHL or college level.

They list 186 college commitments in the history of their team, dating back to 2009-10. Of those, 112 committed to Division I programs.

Fourteen players on this year’s team have already committed to Division I programs.

“It was all-world. You want to get a Division I commitment, you go to Janesville,” LaFontaine said. “The Jets are just known for preparing guys and sending them to the next level.”

Dibble said the key in continuing a culture of advancement through Janesville is getting players to buy in to a team mentality.

“They all come here because they want to play Division I hockey, and they think Janesville is the best place to do it,” Dibble said. “They learn in a short period of time that if they put more into their teammates getting a Division I deal, it happens a little faster for them. You never realize how hard you’re working for one another when you care for someone else.

“That’s what is special about Janesville, these guys want it for one another as much as themselves.”

LaFontaine’s journey through college was far less a straight shot than that of Novak.

After posting a .921 save percentage and 2.16 goals against average in 41 regular-season games in his lone season with the Jets in 2015-16, he became the team’s first NHL Draft pick. He went in the third round in 2016 to the Carolina Panthers.

“I think Larry is up to six or seven goalies at the Division I level. He’s got two NHL draft picks,” LaFontaine said. “Larry has just done a phenomenal job as far as the goaltending aspect.”

LaFontaine headed to Michigan, where he played 22 games in two seasons before leaving to play with the Penticton Vees in British Columbia, Canada.

“I loved Janesville, and I was totally prepared to go DI and play. It just got to the point where there was another good goalie that took the reins,” LaFontaine said. “It was never a matter of not being ready, it was just a matter of finding a spot that was good for me.”

After a season in Canada, he returned to the collegiate ranks at Minnesota. He went 9-9-6 with a .919 save percentage and 2.55 goals against average last year.

Comparing college commitments of the Jets to other junior hockey teams is an inexact science. The numbers are somewhat unofficial because some players commit prior to joining junior teams and others change their commitments after leaving a team.

Anecdotally speaking, however, the Jets’ three Hobey-hopeful alums all agreed that Janesville has established itself as a premier junior team when it comes to advancement.

“I think it’s a pretty special program,” Novak said. “They’ve got such a strong culture. Guys want to win and get to the next level, and the work ethic is always there, even when I had two different coaches.”

Dibble stepped down after the 16-17 season, and Gary Schuchuk was hired. Corey Leivermann took over for Schuchuk when he was relieved of his duties in the middle of the 2018-19 season. Leivermann left after last season, and Parker Burgess is now in his first year as head coach.

There have certainly been consistencies, however, including Clemens as the goalie coach who seems to always help keep the Jets stocked with goalie prospects.

“It’s just the ownership and coaches doing what they do best, and that’s preparing guys,” LaFontaine said.

And the biggest constant in the Jets’ history has been an ownership group committed to helping players advance. Included in that group is the team president, founder and managing partner, Bill McCoshen.

“It (the Jets experience) is pretty similar to a lot of junior guys’ experiences, in terms of the equipment and every day life. But what makes Janesville so valuable is the people they have,” Solow said. “It all goes back to Mr. McCoshen and what a great guy he is. He hires great people.

“I just think the people in the organization are the ones that really determine how successful it is, and Janesville has always had the best people.”

Solow’s rise from Janesville to Hobey Baker nominee might be the best story in the history of the Jets.

He had 13 points in 36 games in the aforementioned first season when he arrived as a 15-year-old.

“He was in an out of the lineup,” Dibble said. “But he stuck with it, worked his tail off and his teammates pushed him. The following year, he’s one of the biggest impacts on our team. Then he gets to the USHL and runs with it.”

Solow had seven goals and 10 assists in 25 games with the Jets in 2015-16 before moving up to play on the USHL’s Dubuque team, where he had eight goals and 17 assists in 39 games.

In three and a half seasons with Northeastern, Solow has 43 goals and 60 assists in 140 games. He was an alternate captain last year and wears the “C” on his sweater this season.

“It’s basically about becoming an adult. And so being a part of the Jets, especially when I was so young, played a huge role in getting me ready for that.”

Whether sending players to the Division I or Division III college ranks or simply out into the world, Dibble said the Jets remain committed to putting players on the right path.

“It’s always been not just about the now, but it’s about the future, as well,” Dibble said. “It’s easy as an organization or as a coach to say, ‘We want the kids to move on as fast as they possibly can.’ But ultimately it’s making sure when they do leave that, not just on the hockey side but as human beings.”

Vote for the Hobey

The Hobey Baker Award is currently in its fan voting stage. Fans can vote for their favorite nominee once per day through March 8.