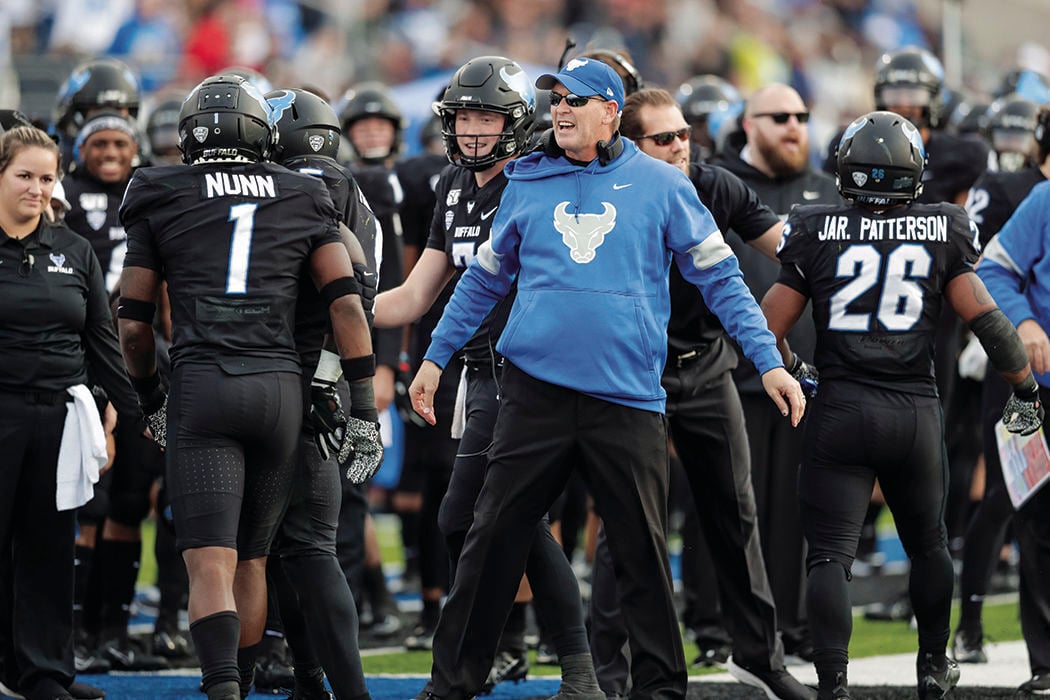 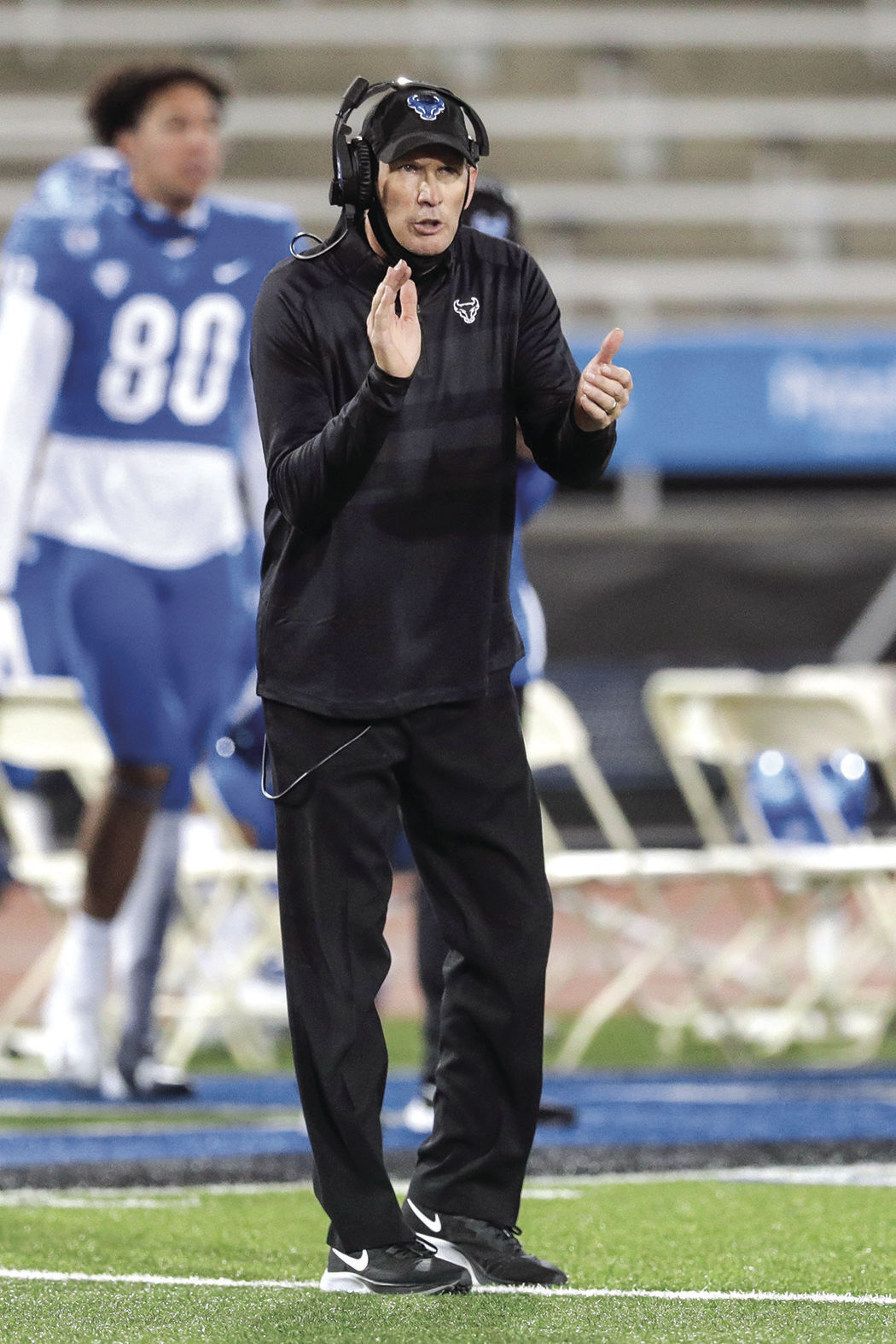 Lance Leipold is 27-7 over his last 34 games at the University of Buffalo. 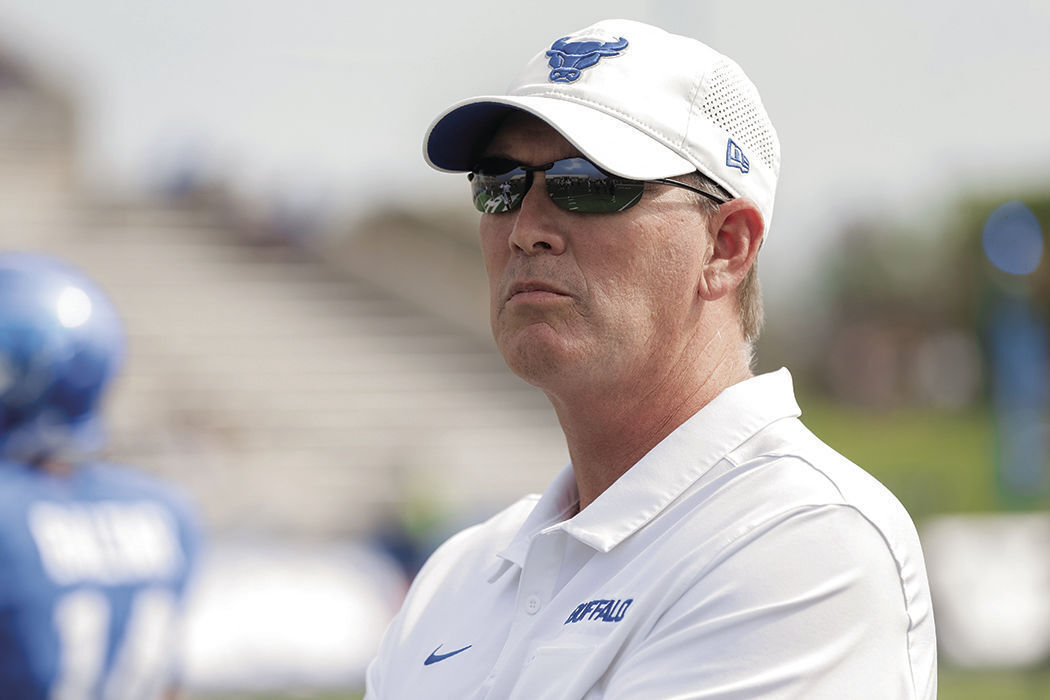 After going 106-9 and leading UW-Whitewater to six NCAA Division III national championships, Lance Leipold has led the University of Buffalo for the last six seasons. Leipold was named the 2020 Mid-American Conference Coach Year.

Lance Leipold is 27-7 over his last 34 games at the University of Buffalo.

After going 106-9 and leading UW-Whitewater to six NCAA Division III national championships, Lance Leipold has led the University of Buffalo for the last six seasons. Leipold was named the 2020 Mid-American Conference Coach Year.

Around these parts the name Lance Leipold is well known, as is his impressive list of accomplishments as the former head football coach at UW-Whitewater.

But now Leipold’s name is becoming an established one throughout the college football community.

Leipold has the highest-scoring team in the nation, and on Friday he will lead the University at Buffalo program into its second Mid-American Conference championship game in three years when the Bulls (5-0 and winners of the East Division) face Ball State (5-1 and winners of the West Division) in the title game. Kickoff at Detroit’s Ford Field at 6:30 p.m.

The Bulls’ 51.8 points per game lead all FBS programs. While Leipold and his staff didn’t envision quite this type of success, there were reasons to think the 2020 Bulls had great potential.

“We liked the makeup of our team, and even though we had Ohio State and Kansas State on our schedule, two very challenging games, we liked the way we were going to match up with our (conference) schedule,” said Leipold, who on Tuesday was named the MAC Coach of the Year for the second time. “I’m not normally one to talk that way, but I told them I thought they had a chance to be good and we could have a special year.”

But in mid-August, instead of beginning his sixth training camp with Buffalo and 34th season as a college football coach, Leipold was back in Wisconsin celebrating his father Ken’s 83rd birthday, because COVID-19 put all of college football on hold.

“The emotional roller-coaster that these young men went through, from not coming back to school, to having no season, to then having a season, to get to this point and play five and now six games really says a lot,” said Leipold, now in his sixth season at Buffalo. “For them to keep going and persevere, I’m really proud of our guys for the way they’ve handled it.”

While many of the Power Five conferences started playing games in September, the MAC did not start competition until the first week of November.

Leipold has been part of a lot of football games, but even he admitted he had never seen anything like the performance of Jaret Patterson. In a Week 4 matchup with Kent State, the junior tailback tied an NCAA record by scoring eight touchdowns while rushing for 409 yards—the second most in a single Division I game—in a 70-41 victory.

“I had no idea he had 400 yards,” Leipold said. “Last year we lost a 21-point lead to Kent State with under 8 minutes to go and I didn’t want that to happen again, so the whole time I wasn’t thinking about Jaret’s numbers; I was thinking about keeping Kent State out of the end zone and winning the game.”

Patterson has amassed 1,025 rushing yards on 123 carries and 18 touchdowns in only five games, leading the nation with a 205 yards-per-game average.

Patterson had his remarkable game while wearing the jersey number of Solomon Jackson, a former Buffalo defensive end who in 2016, while weight training with teammates during the offseason, collapsed and later died.

Each week before the scheduled game, a player is chosen to wear the jersey number Jackson wore. Instead of wearing his No. 26 jersey like he had every other game, Patterson donned the No. 41 jersey in Jackson’s honor. And history was made.

“That made it even more special,” Leipold said. “Kevin Marks, Jaret’s backup, wore it this past week and had a career day, as well. It’s still special even though the guys that are here now weren’t when Solomon was with us; they still take great pride wearing the jersey.”

The program slogan: “All Fore On,” or All41, has been used since Jackson’s passing.

Leipold, a Jefferson native and former UW-Whitewater Hall of Fame quarterback, returned to campus as head coach in 2007, succeeding his coach and another UW-W Hall of Famer, Bob Berezowitz. From there he proceeded to turn the Division III college football world upside down.

In his very first season, Leipold guided the Warhawks to a 31-21 victory over perennial Division III powerhouse Mount Union, Ohio. Five more national titles followed in the next seven seasons, all over Mount Union.

He finished his eight seasons at UW-W with an unthinkable 109-6 record while becoming the fastest head coach in college football history to record 100 wins.

Toward the end of the 2014 season, while the Warhawks were still in the midst of the DIII playoffs, Leipold was announced as the new head football coach at the Buffalo, making the rather rare jump from Division III to Division I.

Leipold also did something that not many thought would work, taking three assistants from Whitewater with him to Buffalo. Joining Leipold were Allen Hensel, offensive coordinator Andy Kotelnicki, and defensive coordinator Brian Borland, a Fort Atkinson native.

Kotelnicki and Borland remain in their same positions with the program, while Leipold also brought back two more former UW-W assistants, Jim Zebrowski and Chris Simpson. Zebrowski, UB’s Quarterbacks/Co-Offensive Coordinator, was Leipold’s offensive coordinator for three seasons in Whitewater, while Simpson, the Bulls’ linebackers coach/co-defensive coordinator, was both a former player and coach with the Warhawks.

“I appreciate their loyalty,” he said. “It’s good to know that people you’ve worked with before feel like it’s going to be a good environment for them. They’ve all done an outstanding job getting this program to where it is today.”

Through their first 34 games together, Leipold and his staff led the Bulls to just nine wins. But since then they are 27-7, including the program’s first-ever bowl victory, a 31-9 win over UNC-Charlotte in the 2019 Makers Wanted Bahamas Bowl.

In February, Leipold signed a five-year contract extension to remain coach of the UB football program through the 2024 season.

Recently Leipold’s name has surfaced as a possible replacement of Lovie Smith, who was fired last weekend as the University of Illinois head coach. But when asked about the rumor, Leipold quickly shifted the focus to his current players.

“From everything these guys have gone through this season, they don’t need any more distractions; it’s not fair, and really there’s nothing to discuss,” Leipold said. “It’s flattering, but I think it’s just a sign of what our program has accomplished, from where it was when we arrived to now.”

Among the others on the list are Cincinnati’s Luke Fickell, another Wisconsin native Jay Norvell of Nevada, and Sean Lewis, head coach of Leipold’s MAC rival Kent State.

Buffalo, now ranked in the top 25 of the Associated Press poll, leaves for Detroit today. The game will be played in an empty dome as no fans will be permitted due to the ongoing pandemic.

It will be a rematch of the 2008 MAC championship which Buffalo won, 42-24, for its only conference title game win. This is only the third time Buffalo has played in the championship game.

“I’m not normally one to talk that way, but I told them I thought they had a chance to be good and we could have a special year.”