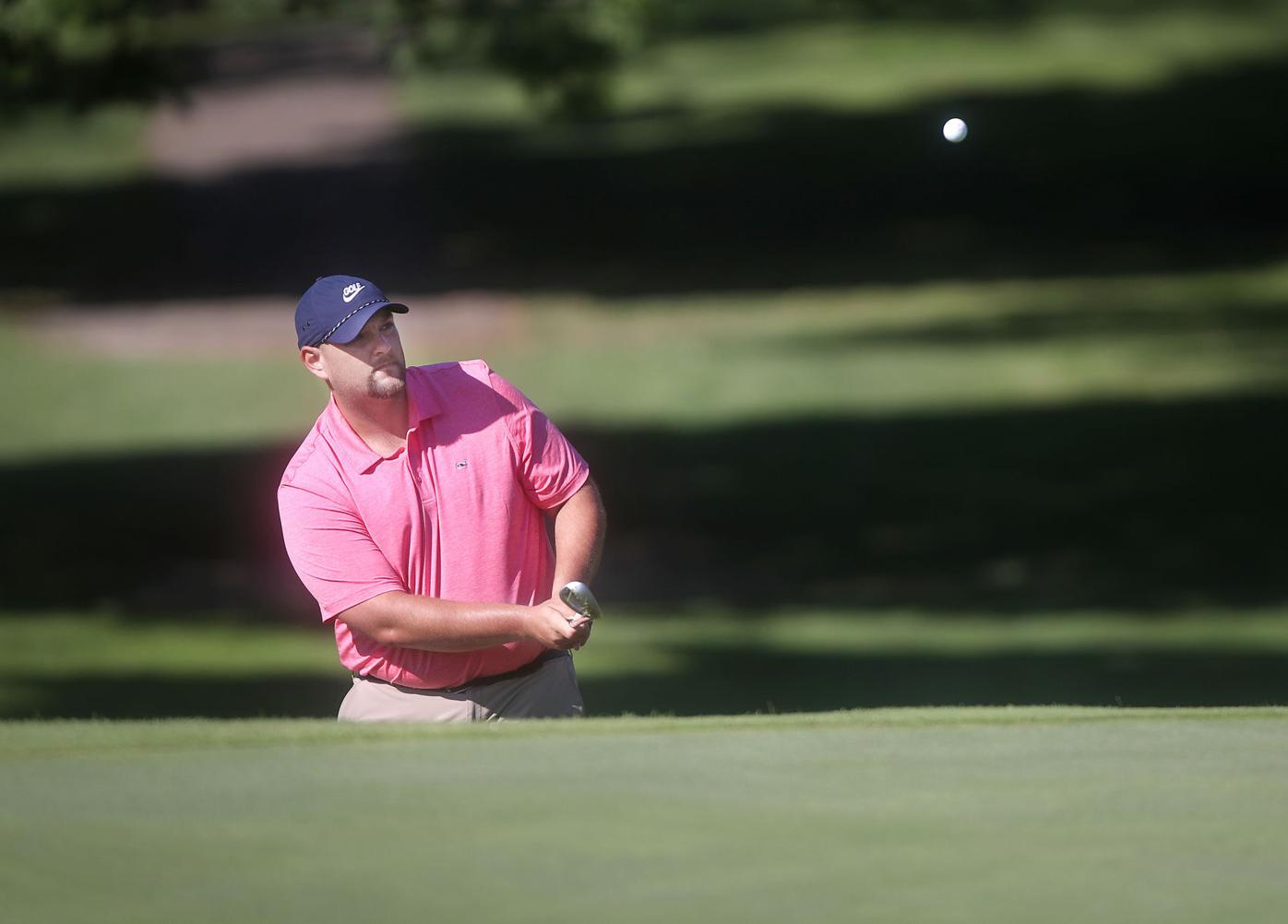 Sam Van Galder chips up onto the green on the 9th hole during the first day of play in the Janesville Men's City Tournament at the Janesville Country Club on Friday, July 24. 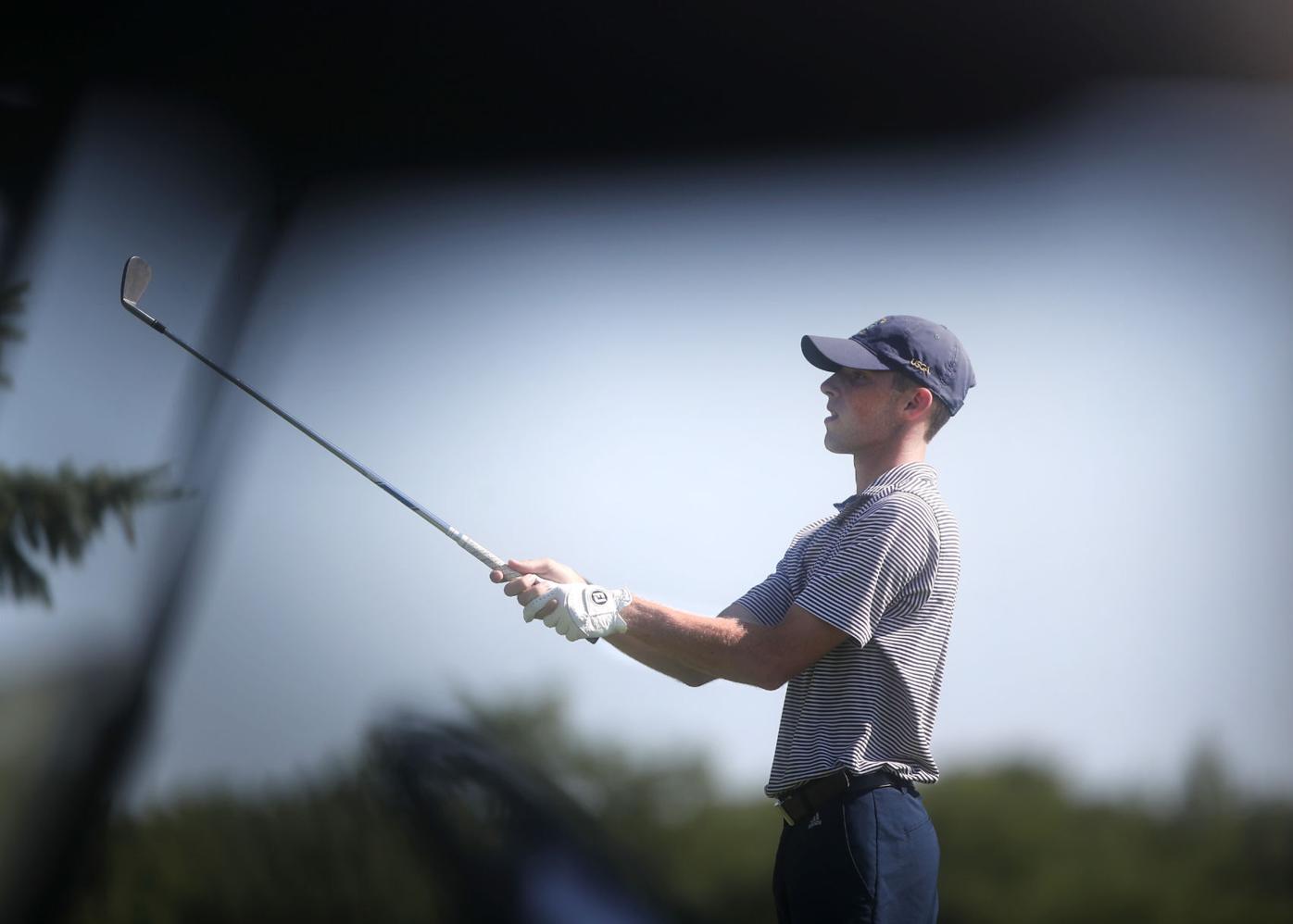 Matt Zimmerman hits from the 10th tee box during the first day of play in the Janesville Men's City Tournament at the Janesville Country Club on Friday, July 24.

Sam Van Galder chips up onto the green on the 9th hole during the first day of play in the Janesville Men's City Tournament at the Janesville Country Club on Friday, July 24.

Matt Zimmerman hits from the 10th tee box during the first day of play in the Janesville Men's City Tournament at the Janesville Country Club on Friday, July 24.

Expect a shootout in Sunday's final round of the Janesville Men's City golf tournament.

Brian Angileri and Ryan Coffey share the lead after 36 holes, but six other golfers, including six-time City champion Sam Van Galder, are within striking distance.

Coffey, the 2002 City champ, and Angileri are atop the leaderboard following Saturday's second round at Glen Erin Golf Club. Coffey and Angileri both shot even-par 71s Saturday and are 1-over (144) heading into Sunday's final round at Riverside.

Kevin Riley is one shot back, with Van Galder two back after firing the low round of the day Saturday--a 1-under 70.

Last year's champion and first-round leader Andrew Morrison shot 76 and is three back.

Angileri, a 2002 Beloit Memorial graduate, is looking forward to Sunday's finish on his home course.

"I know if I can shoot 70 or better, I'll have a chance," Angileri said. "I'm going to keep the same strategy tomorrow, and hopefully, go low.

"More than anything, just stay in the moment. Keep the ball in front of me and not try to kill it."

Consistency was the key for Coffey on Saturday. His round consisted of 16 pars, one birdie and one bogey.

Van Galder regrouped after a disappointing 76 in round one on his home course at the Janesville Country Club. He had three birdies and two bogeys and just missed shooting a 69 after lipping his birdie putt on No. 18.

"It's a timing thing," Van Galder said. "My timing was off yesterday, and I grinded out what was probably a pretty good 76.

"I didn't really do anything special today, but I hit a lot of greens and made the eight- and nine-footers when I had to."

Morrison couldn't get anything going Saturday. He had five bogeys and a double bogey on his card.

"I was never in the driver's seat," Morrison said. "It seems like I was always chasing."

Aaron Coffey, Ryan's brother, sits in sixth place and is five shots back at 149. Matt Zimmerman shot even-par 71 Saturday and is six back at 150.

Van Galder, who played well in the Ray Fischer State Amateur Championship last month at Riverside, said Sunday's finale will come down to one variable.

"It's all going to depend on how you play the par 5s," Van Galder said. "You can't give up any shots on those, and really, you probably have to birdie at least three of them.

"I'm really looking forward to it. I love the competition, and the fact there are quite a few guys with a chance to win it is going to make for some really good golf."

The tournament was divided into four Flights for Sunday's final round.