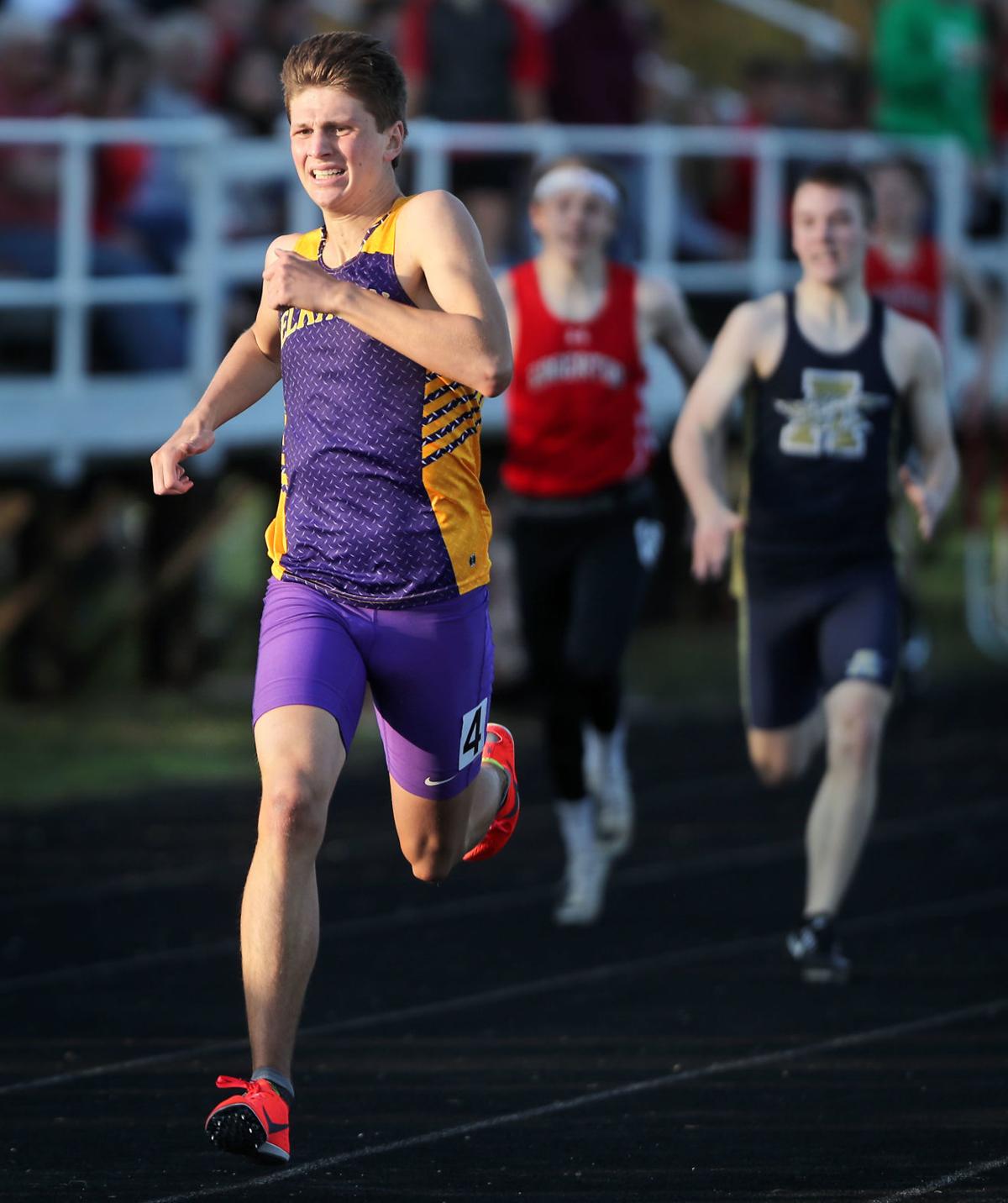 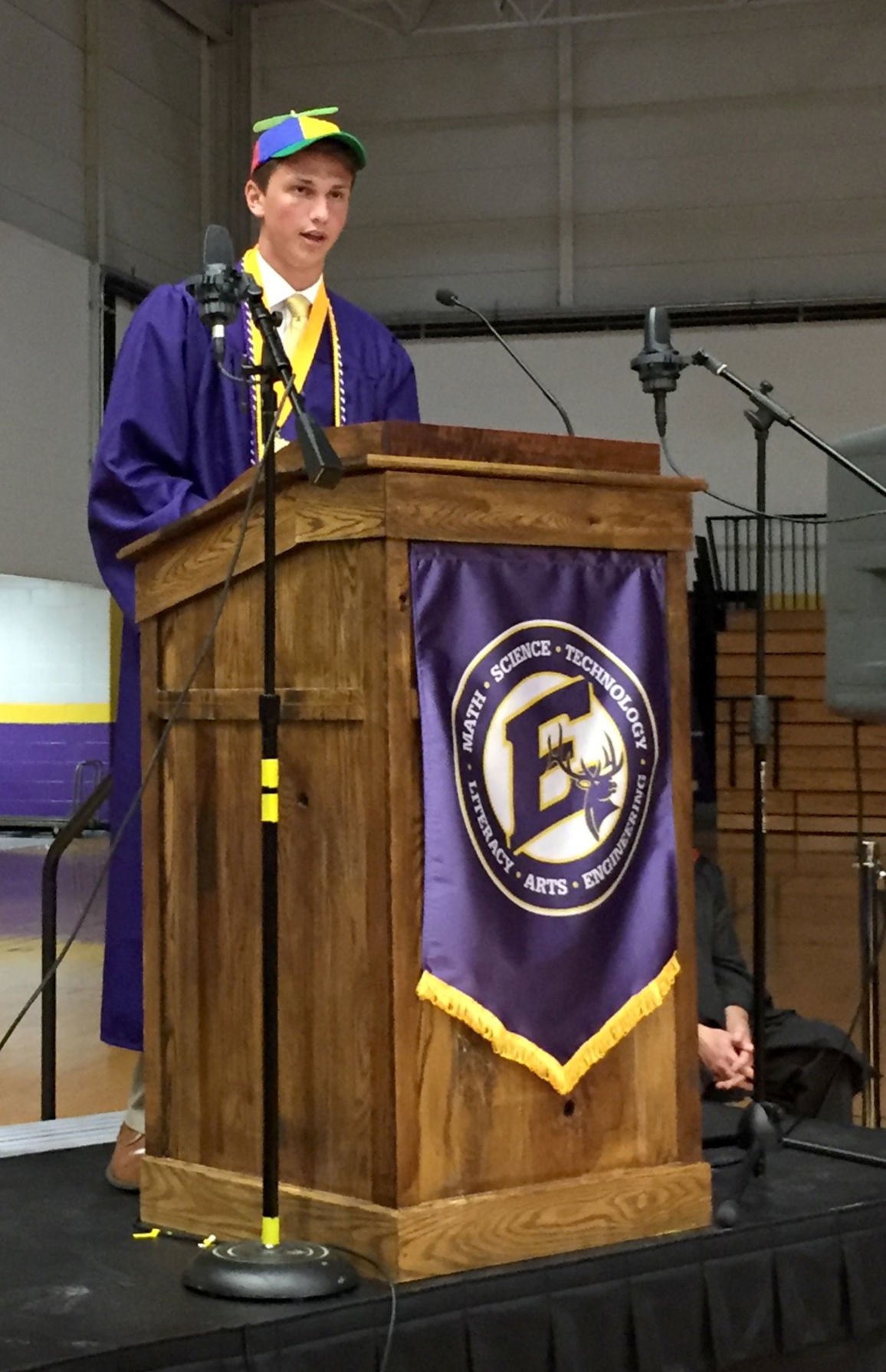 Valedictorian Derek Davey puts on a new hat during his speech at graduation Thursday, June 7, 2018, at Elkhorn Area High School. 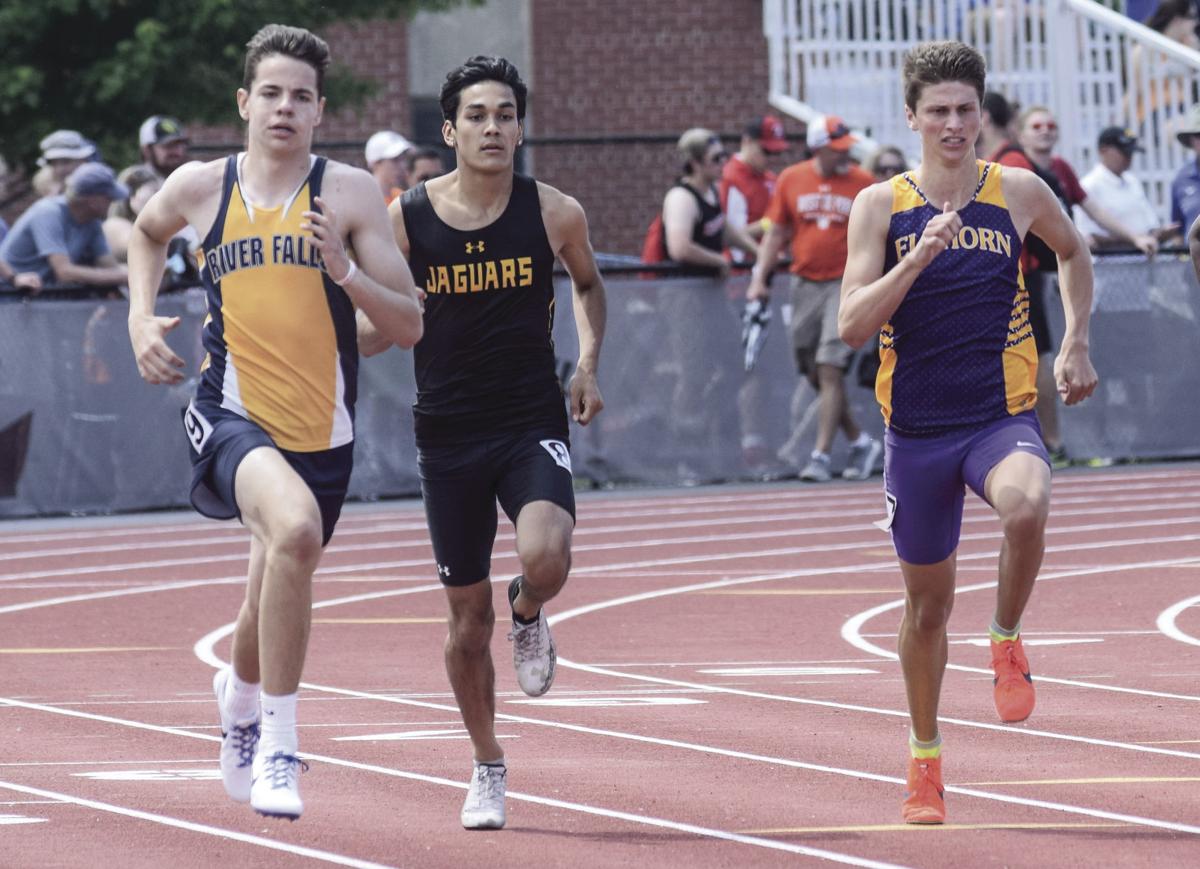 Elkhorn senior Derek Davey looks to take an early lead against Ashwaubenon's Jose Guzman and River Falls' Payton Flood, left, during their preliminary heat of the Division 1 boys 400 meter run on Day 1 of the WIAA State Track and Field meet at UW-La Crosse on Friday.

Valedictorian Derek Davey puts on a new hat during his speech at graduation Thursday, June 7, 2018, at Elkhorn Area High School.

Elkhorn senior Derek Davey looks to take an early lead against Ashwaubenon's Jose Guzman and River Falls' Payton Flood, left, during their preliminary heat of the Division 1 boys 400 meter run on Day 1 of the WIAA State Track and Field meet at UW-La Crosse on Friday.

His sophomore year at Brown University ended with a canceled track and field season and online courses being completed more than 1,000 miles away from campus, back in his hometown of Elkhorn.

If that wasn’t odd enough, Davey and his Brown teammates were told two weeks ago that their men’s track and field program was one of 11 varsity sports that Brown would be cutting permanently.

“It’s been just a crazy 2020,” Davey said Tuesday in a phone interview from back on campus in Providence, Rhode Island.

That night, the men’s track team met with Brown’s athletic director and president, and the athletes were told that upon further evaluation, their program would be reinstated.

It was the good news Davey had been hoping for. And perhaps it will put a cap on the topsy-turvy nature of this calendar year.

Davey graduated from Elkhorn Area High in 2018 and fared well in his first season competing in the Ivy League. He ran a personal-best 1:52.58 in the 800 meters at the Ivy League Championships during last year’s outdoor season and had found success during the indoor season at the 500-meter distance, as well.

“I was one of two freshmen that made the finals, so that was probably my best race,” Davey said of the 800 at the Ivy meet. “On the indoor side, I ran club for a team in Milwaukee indoors. I enjoyed it but wasn’t a huge fan. That’s changed a lot since being here. I’ve been running a 500, which is unique to the Ivy League.

“Brown middle distance has a pretty prominent legacy in the 500. It’s nice to keep that tradition going.”

A five-time WIAA state track and field meet qualifier, Davey had taken advantage of what he had learned from training at the college level to remain healthy.

And he was looking forward to a successful sophomore outdoor season.

Then the coronavirus pandemic hit. And it hit particularly hard early on the east coast.

The Ivy League was one of the first NCAA Division I conferences to announce that it would not participate in spring sports.

Eventually the NCAA canceled those seasons altogether and later decided spring athletes would not lose their year of eligibility because the season was canceled.

Davey returned to Elkhorn and finished his spring semester classes online with little to no issues, he said.

On May 28, Davey received an email that Brown would be making an athletics announcement. The email was sent about one hour before an online webinar was scheduled to begin, and he was not on his phone at the time and did not see the email before the announcement was made.

“I kind of thought it was a joke at first,” Davey said. “But then we were all really frustrated—especially with the procedural aspect of it and the lack of transparency.”

Other universities have announced that they are cutting one or more varsity sports since the onset of the coronavirus pandemic.

But officials from Brown said in their announcement they had been studying and weighing such options for a year, with the hopes of their varsity programs becoming more competitive with their peers.

“Our coach probably found out half an hour before we did,” Davey said. “But they presented it that they had been looking into it and doing research for a year. I feel like, to not give any head’s up to any coaches that they were doing this analysis, was a frustrating point.”

Additionally, despite what the school’s lengthy process, the announcement was made so late in the academic calendar year that it would have made it difficult for athletes from those programs being cut to transfer and be eligible to compete next year.

Davey and his teammates held out hope they wouldn’t have to wade through those murky transfer waters. And they worked hard to try and avoid it.

Advocates for the Brown men’s track and field program—including current athletes and coaches, alumni and even proponents from other Ivy League schools—spent nearly two weeks making their case for reinstatement.

A website, savebrowntrack.org, was created. Davey said he reached out to other Ivy League athletes and programs to gain additional backing.

There were two main arguments: that cutting the program was a detriment to the diversity in Brown athletics and that school officials had not considered Brown’s deep and rich history in the sports.

“The program’s been around since the 1800s, so there’s a lot of history,” Davey said. “I’m an econ and history major, so I definitely find that interesting. When you look at numbers and funding and money, maybe it seems easy to make a decision, but there’s actually a lot more to it.”

Brown’s initial announcement stated, “The initiative aligns with the University’s diversity and inclusion efforts ... enhancing diversity on teams, which already attract a diverse array of student-athletes.”

And yet, Davey said, the track and field program was one of the school’s most diverse programs. Nearly 11% of Brown’s students are black, according to an Associated Press story Wednesday that said 12 of approximately 50 (24%) athletes on the men’s track and field team are black.

“Our students, alumni, and parents took the time to share their deeply personal stories of the transformative impact that participation in track, field, and cross country has had on their lives,” Brown president Christina Paxson said in her announcement the program would be reinstated. “Many noted that, through Brown’s history, these sports have been a point of entry to higher education for academically talented students who otherwise would not have had the opportunity, many of them students of color.”

That reinstatement announcement was made to the team Tuesday night. The athletes and coaches celebrated but also let Paxson and the athletic department know that the process had hurt their trust in university officials and offered ideas for moving forward.

But, with the program back intact, Davey now says the team can move forward.

“Part of me was worried to run for a school that did that, but now everyone on our team is just fired up,” Davey said. “We’re ready to compete and run this upcoming year, because we had to fight to even have a team.”

Derek’s brother, Devon, who graduated from Elkhorn this spring, is set to run at Columbia next year, so the two might be on a collision course to compete against one another.

“It was one thing after another,” Davey said. “But the news this week was huge.”