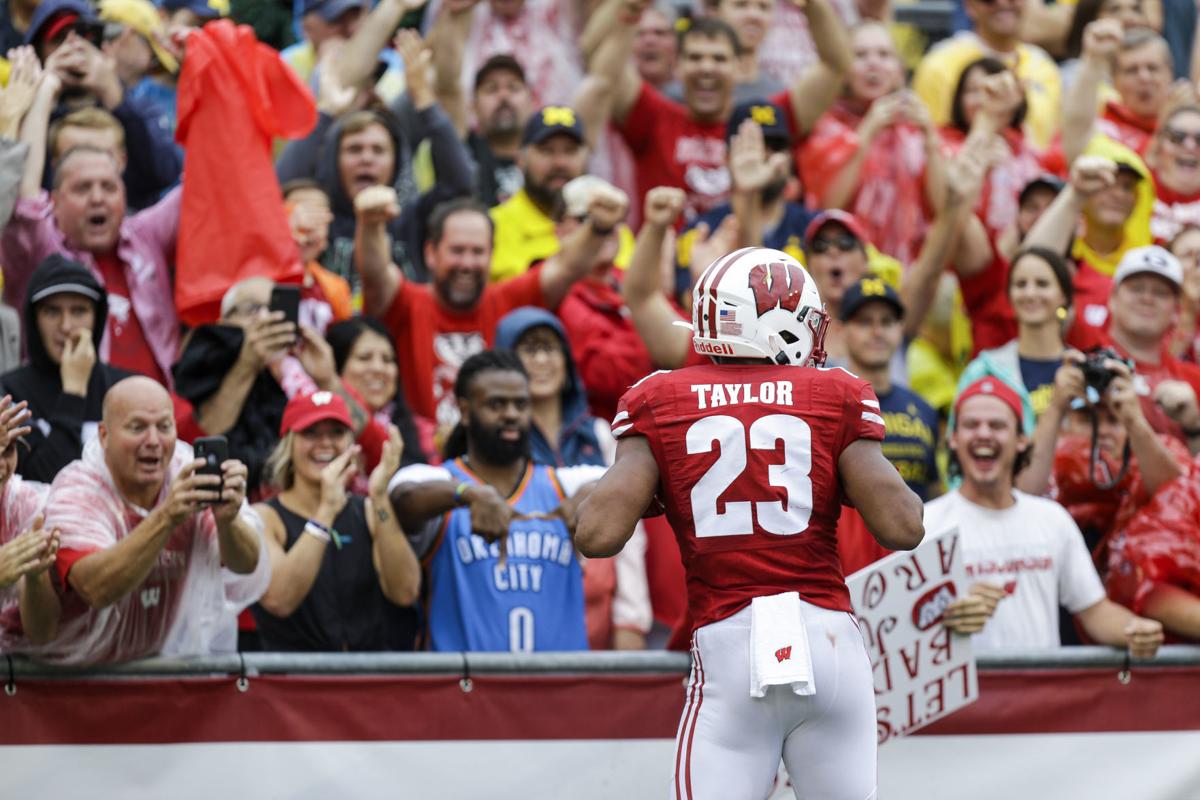 Wisconsin running back Jonathan Taylor celebrates a touchdown against Michigan during the first half of an NCAA college football game Saturday, Sept. 21, 2019, in Madison, Wis. (AP Photo/Andy Manis) 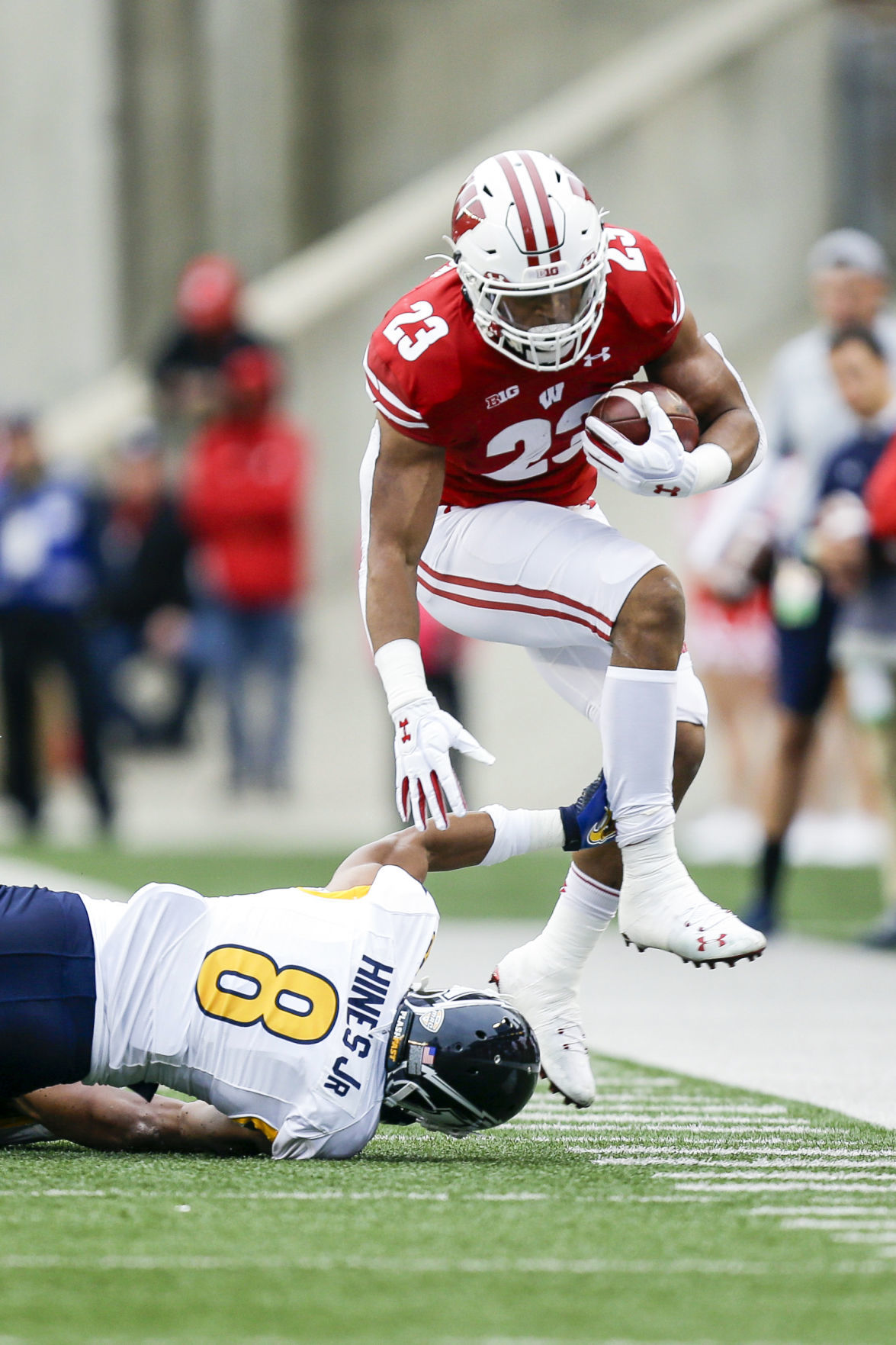 Wisconsin running back Jonathan Taylor celebrates a touchdown against Michigan during the first half of an NCAA college football game Saturday, Sept. 21, 2019, in Madison, Wis. (AP Photo/Andy Manis)

Most years, the highly anticipated and highly overblown NFL draft is an afterthought for me.

I’m too busy being in my element as I cover a high school softball or baseball game or a track and field meet.

Or, on some occasions when duty calls, the world’s least knowledgeable soccer person actually covers a high school girls soccer game. Do you know what a pitch is? “Yeah, I know what that is. Duh! It’s what a pitcher throws.” Yes, but it’s also the what the playing field is called in soccer. “No it’s not. It’s called a soccer field!”

Anyway, these are different times in a much different year. A global pandemic has shut down sports worldwide.

That has given me a chance to actually delve into this year’s NFL draft, which begins tonight and is expected to be on every single TV in the U.S. except two in Nebraska that will instead be tuned in to a replay of the Cornhole League championship match.

I’ve done so much research and looked at so many mock drafts under this stay-at-home order that I feel like Mel Kiper Jr.’s twin brother. Except he has more hair.

I know more about edge rusher Trevis Gipson of Tulsa than his parents, although his mom ran track at North Texas and his dad played basketball at Texas.

So without further adieu, here is my official—and hopefully last—NFL mock draft for Round 1. I’m sure to get a least a couple right, because even a blind squirrel finds a nut every once in awhile.

1. Cincinnati—Joe Burrow, QB, LSU: He’s either the next Troy Aikman or the next Vince Young. The Bengals haven’t been relevant since Boomer Esiason was under center. This pathetic franchise hasn’t won a playoff game since 1990. Burrow will get thrown to the wolves from Day 1. He might get eaten alive.

2. Washington—Chase Young, stud, Ohio State: I don’t like this man. He terrorized my Badgers and nearly set an NCAA single-season sack record in one game against my alma mater. The racist Redskins haven’t sniffed the playoffs in five years, and if Dwayne Haskins is their quarterback going forward, they aren’t going to sniff them for another five years, at least.

3. Miami (in a trade with Detroit)—Tua, QB, Alabama: If Giannis doesn’t need a last name, neither does Tua. My Dolphins have been in search of a quarterback since the GOAT, Dan Marino, hung up his cleats for Isotoner gloves. I’m not buying the Justin Herbert (QB) hype. Tua will put fans in the seats and can sit a year behind Fitzmagic while his hip heals or falls off. Besides, I called Dolphins co-owner Serena Williams, and she said Tua was a lock.

4. New York Giants—Isaiah Simmons, no position, Clemson: This guy could be a placekicker for all we know. Some GMs see him as a linebacker, others as a cornerback. In the words of my twin brother, Mel, who stole this from me, “He’s looked at as being light. But he definitely has the frame to add more weight.” Yeah, what he said.

5. Detroit (from Miami)—Jeff Okudah, bad man, Ohio State: Think he played cornerback at Ohio State, but I don’t remember Jack Coan ever throwing a ball near him, or his own guys, half the time. Matt Patricia is 9-22-1 as head coach at Detroit and is in a must-win now scenario. Cornerbacks aren’t the answer.

6. San Diego, I mean, Los Angeles Chargers—Justin Herbert, QB, Oregon: He beat Wisconsin in the Rose Bowl because the Badgers decided to play touch football instead of tackle in the second half. Hope he fails miserably.

7. Carolina—Derrick Brown, DL, Auburn: Cam Newton gone. Teddy Bridgewater now the QB. This team is going nowhere fast. Brown should enjoy being on the field 80% of the game.

8. Arizona—Tristan Wirfs, half-man/half-mountain, Iowa: At 6-foot-5 and 320 pounds, Wirfs is a big man. I worry QB Kyler Murray will need a stepladder to see over him.

9. Jacksonville—CeeDee Lamb, WR, Oklahoma: The first receiver off the board gets the honor of having Uncle Rico from “Napoleon Dynamite”—Gardner Minshew II—throwing him balls he’ll never be able to catch.

10. Cleveland—Andrew Thomas, OL, Georgia: The hapless Browns are still searching for Joe Thomas’ replacement and still have Baker Mayfield as their quarterback.

14. Tampa Bay—Josh Jones, OL, Houston: The Bucs added Tom Brady and Gronk, and I think Mike Alstott is coming back, too. Could be a scary offense, but unless Brady gets protection, he could be in a full-body cast by Week 2.

16. Atlanta—Xavier McKinney, s, Alabama: The Dirty Birds have been relying on Matty Ice for too long and may look to his replacement here and take a flier on Jordan Love of Utah State.

17. Dallas—K’Lavon Chaisson, edge, LSU: There are teams I hate, and then there are the Cowboys. Yuck! And now with the great Travis Frederick retiring, my only hope for the Cowboys is that they draft no Badgers.

18. Miami (one of 358 picks in the draft)—Mekhi Becton, OL, Louisville: Dolphs have their quarterback of the future with Tua, but unless someone can block for him, he’ll break his other hip and never play again.

19. Las Vegas—Jeff Gladney, CB, TCU: Will players be allowed to hit The Strip during their off days? If fans aren’t allowed to attend games, can we please have Frank Caliendo mic’d up as Jon Gruden for one game?

20. Jacksonville—Yetur Gross-Matos, edge, Penn State: The best name in the draft goes to the worst team in the state.

22. Minnesota—Jeremy Chinn, S, Southern Illinois: The Vikqueens did absolutely nothing in the offseason except extend the contract of “Joe Average,” Kirk Cousins. Chinn wowed them at the combine, much like former Minnesota DB Trae Waynes, who only ever saw the back of the opposing receiver’s jersey he was covering.

23. New England—Jordan Love, QB, Utah State: In a sad commentary on the state of Patriots football, the three New England season-ticket holders that believed Jarrett Stidham was the long-term answer at QB have been reported as missing.

24. New Orleans—Jordyn Brooks, LB, Texas Tech: The Saints lost a home playoff game to Kirk Cousins. Enough said. Brees is back for two more years but isn’t getting any younger.

26. Miami—Jonathan Taylor, all-world, Wisconsin: My draft and my life are complete as the fabulous ‘Fins pick up their next Mercury Morris—minus the baggage and eventual prison sentence. The boy wonder proved last season that he’s indeed a three-down back. Tua, a tackle and Taylor. Oh my!

27. Seattle—Isaiah Wilson, needs a truck scale, Georgia: At 350 pounds, the Seahawks get a player that devours everything in sight—on and off the field. Russell Wilson may just grab Wilson’s jersey and run behind him on every play.

28. Baltimore—Kenneth Murray, LB, Oklahoma: The scouting report on Murray says he’s a tackling machine who plays out of control. Sounds like Ray Lewis.

29. Tennessee—Zack Baun, playmaker, Wisconsin: The Titans get the steal of the first round. He might end up with more tackles his rookie season than the entire Minnesota secondary.

30. Green Bay Packers, Patrick Queen, LB, LSU: The Pack have the king with Aaron Rodgers and now add the Queen. Yes, I know wide receiver is a definite need for the Green and Gold, but Queen is the linebacker they’ve been looking for since Goldilocks left town.

32. Kansas City—D’Andre Swift, RB, Georgia: The rich get richer as the Chiefs get this versatile threat. Good luck stopping this offense.