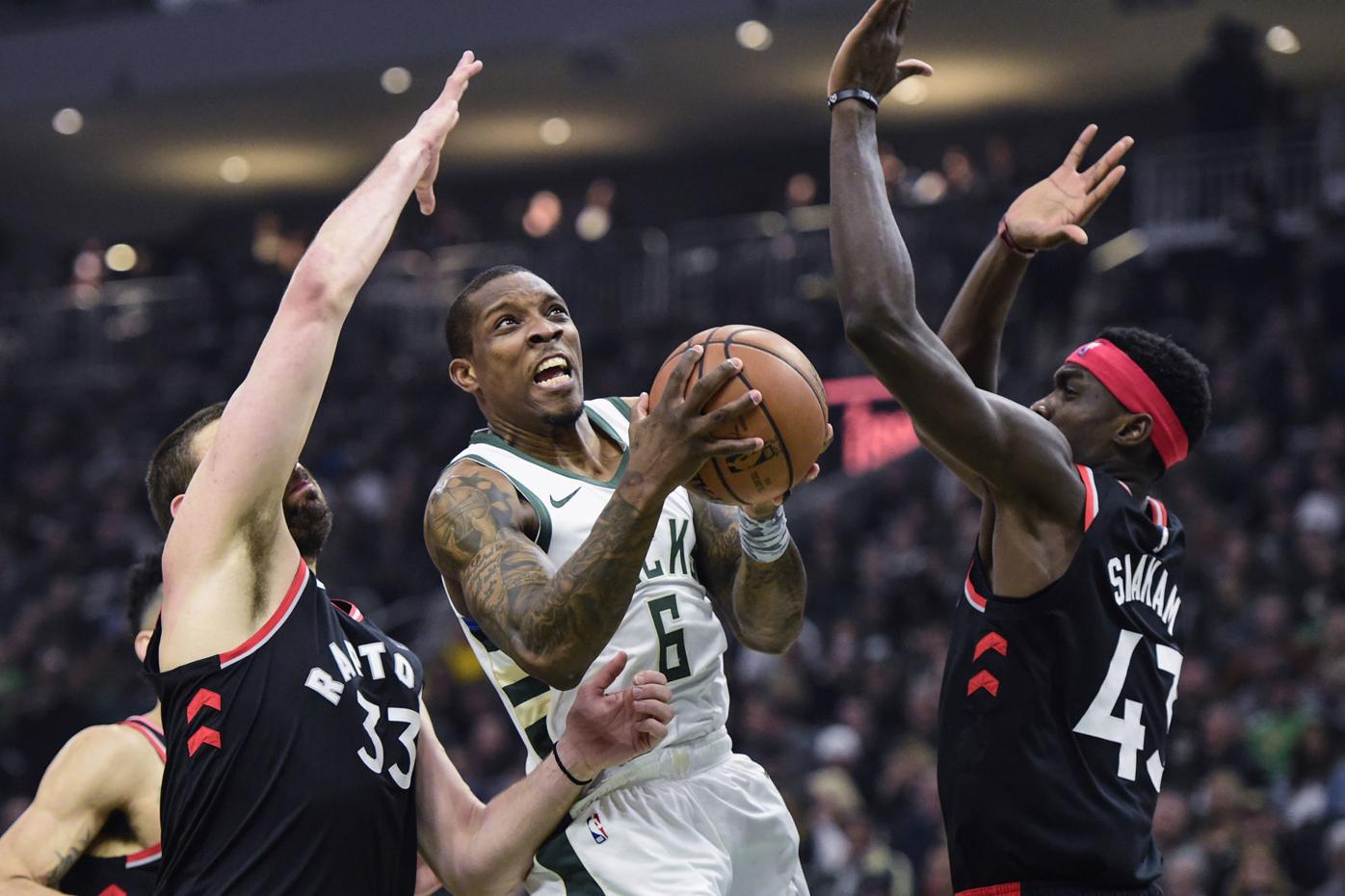 Milwaukee Bucks guard Eric Bledsoe (6) drives to the basket between Toronto Raptors center Marc Gasol (33) and forward Pascal Siakam (43) during the first half of Game 2 of the NBA basketball playoffs Eastern Conference finals, Friday, May 17, 2019, in Milwaukee. (Frank Gunn/The Canadian Press via AP) 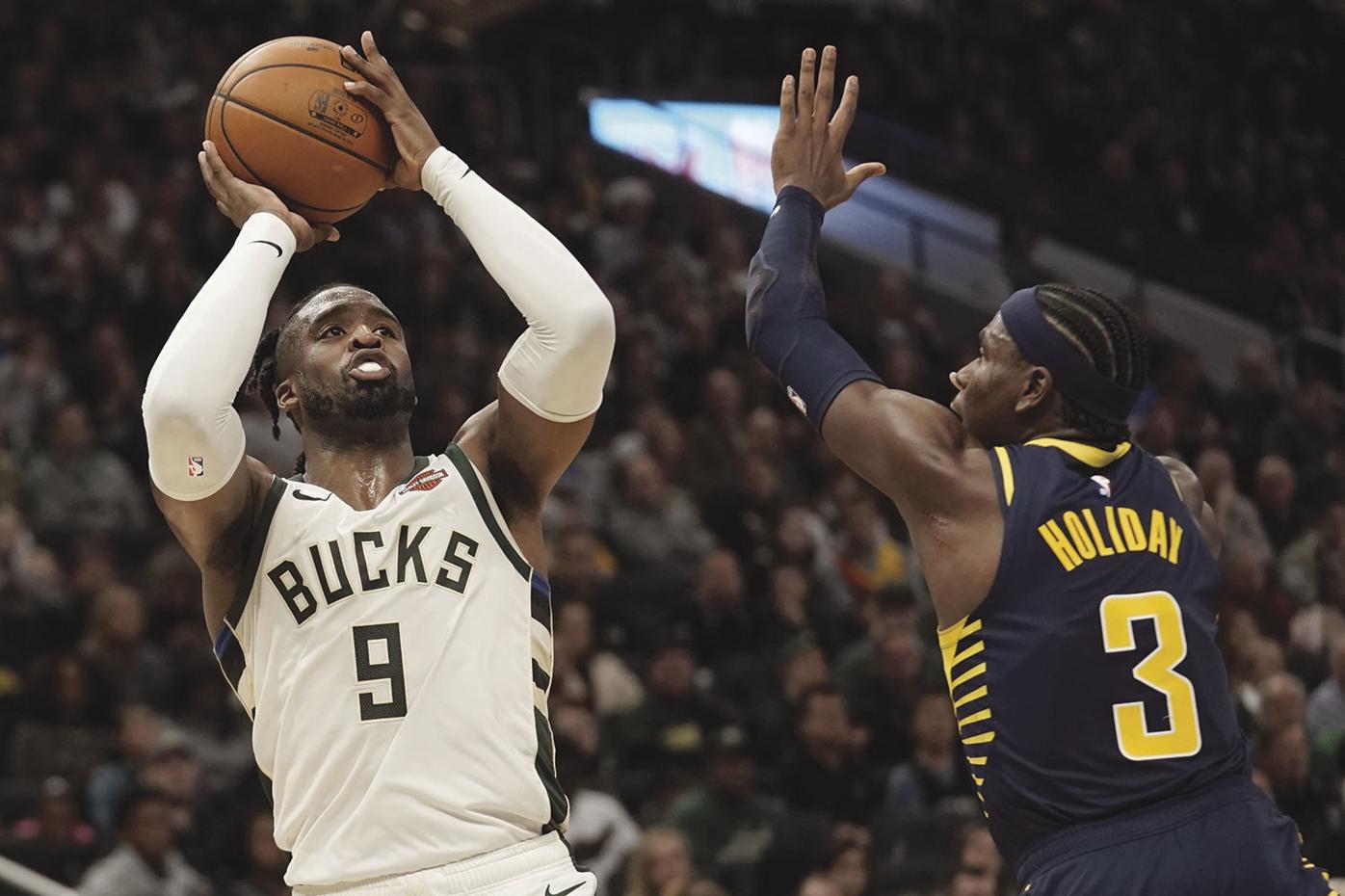 Milwaukee Bucks guard Eric Bledsoe (6) drives to the basket between Toronto Raptors center Marc Gasol (33) and forward Pascal Siakam (43) during the first half of Game 2 of the NBA basketball playoffs Eastern Conference finals, Friday, May 17, 2019, in Milwaukee. (Frank Gunn/The Canadian Press via AP)

Long before Pop Rocks and Rubik’s Cube were the craze, the cool thing to do when I was a kid was to stuff three pieces of Bazooka Joe gum into my mouth, chew the heck out of it for five minutes and then try and blow a bubble inside another one.

I accomplished the trick several times, but the bigger bubble always popped—and usually all over my face.

Kind of like what happened to the Bucks on Tuesday night.

The bubble inside the bubble popped for the team with the NBA’s best record.

Beaten soundly in five games by University of Wisconsin Public Enemy No. 1 Tyler Herro and the Miami Heat.

The loss marked the second straight season that the Bucks imploded in the postseason after a dominating regular season. Toronto overcame a 2-0 deficit last year to win four straight and eliminate Milwaukee in the Eastern Conference finals.

So what’s next for the franchise? How does it get back to Fear The Deer instead of Jeer The Deer?

Where is Giannis’ head at in all of this? Will he sign a super-max contract to stay in Brew Town or will he join forces in 2022 with the likes of Stephen Curry in Golden State, King James and the Lakers or—heaven-forbid—Herro and the Heat?

Here’s what my crystal ball tells me ...

My best guess is that he stays on in Milwaukee, but if there’s a third straight flame-out next postseason, Coach Bud can pack his bags.

He’s signed for one more year and could realistically sign his supermax contract this fall, although that would be silly.

Giannis loves Milwaukee and has made that known in various tweets and interviews.

I have total faith in Bucks owners Wes Edens, Marc Lasry and Jamie Dinan that they will give the NBA’s two-time MVP whatever he desires, both as a contract and pieces to the championship puzzle.

Nobody thought Christian Yelich would ever resign with the Brewers and look what happened. Giannis will be a Buck the rest of his career.

Could someone please let Eric Bledsoe know that the playoffs have started?

He was, in a word, awful. The only saving grace out of losing is that I no longer have to watch Bledshow drive the lane, have nowhere to go and then throw up a prayer that either gets blocked or barely draws iron.

Bledsoe is signed through the 2022-23 season, but I would trade him right now for Chris Paul’s impersonator on the State Farm commercials. If the Bucks could package Bledsoe, along with Donte DiVincenzo and a couple of draft picks for Oklahoma City’s Chris Paul or Phoenix’s Devin Booker, I’d pull the trigger in a second.

Khris Middleton is a good basketball player but not a great one.

He showed flashes of being elite in the postseason, especially in Game 4 against the Heat, but then he struggled mightily in Game 5. The Bucks are a better team with Middleton, but he has to continue to improve his overall game before he’s in the elite of the NBA category.

The rest of the Bucks’ roster is hit or miss.

Brook Lopez signed a four-year deal before last season and has grown on me. He’s certainly serviceable as a center, with the ability to open the lane for Giannis with his 3-point shooting prowess, and he’s a force defensively. The knock on Lopez, and I agree, is that he whines too much and tends to fall in love with strictly shooting 3s. He’s a better post player than he thinks he is.

I say hang on to George Hill, too. He’s an experienced point guard that led the NBA in 3-point percentage during the regular season.

I’d bring Wisconsin’s own Wesley Matthews back, too, but not in a starting role. I think he’s better off the bench and playing late in games when you need defensive stops. I thought he did a masterful job on Jimmy Butler after Game 1 of the series.

D.J. Wilson might be my least favorite player in the NBA. Pat Connaughton was great in the Slam-Dunk Contest but not-so-great during actual playoff games. And Sterling Brown is a non-factor.

It’s been rumored that the Bucks are very interested in obtaining Paul, 10-time NBA all-star who would take over the point guard role.

Paul is 35 but still probably has two or three good years ahead of him. If Korver can still play at 38, Paul certainly can. A Bucks starting lineup of Antetokounmpo, Paul, Lopez, Middleton and a free agent such as Brooklyn’s Joe Harris would be a big improvement over this year’s cast.

Hopefully, NBA life is somewhat back to normal next season and the Fiserv Forum is rocking once again.

Don’t tell me playing in the bubble didn’t hurt the Bucks. It’s tough to Fear the Deer when you’re playing like Mickey Mouse.