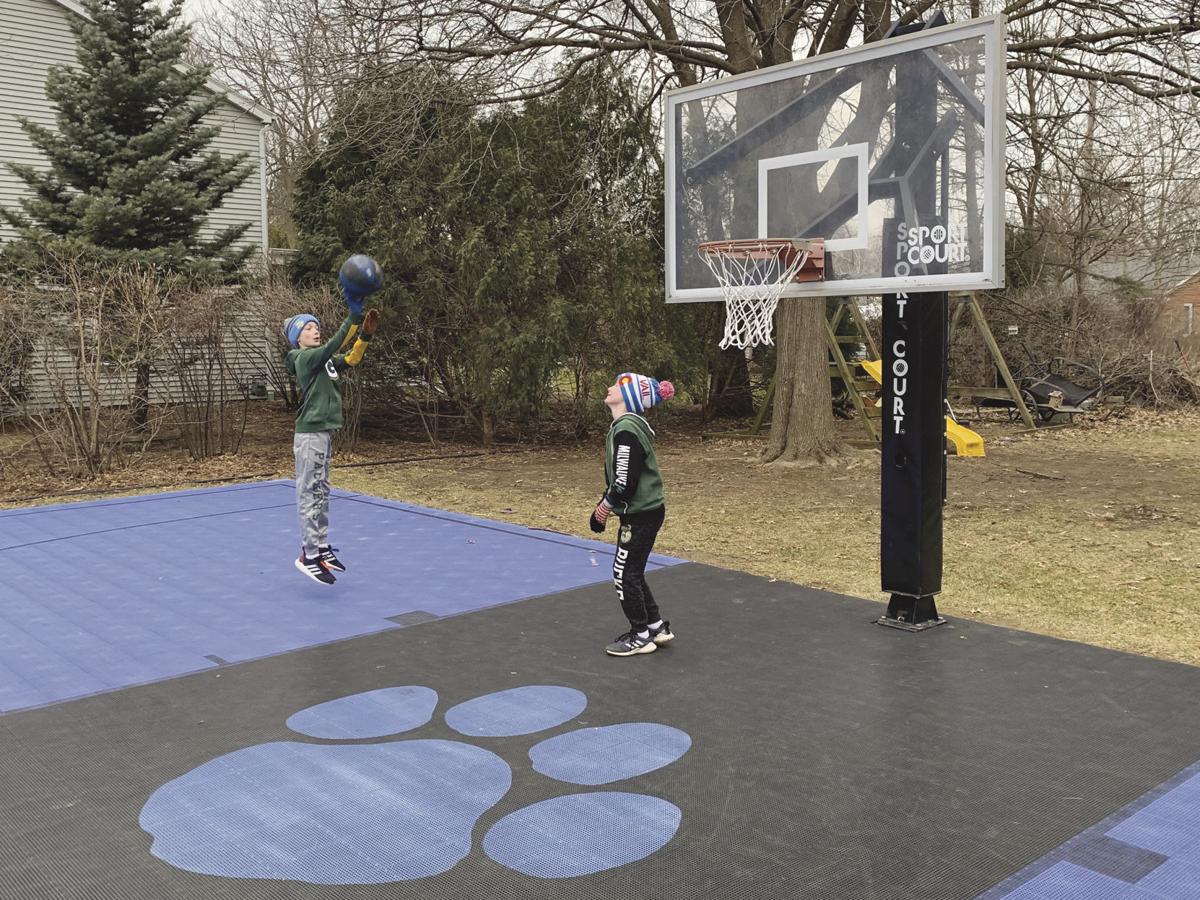 Janesville’s Grant, left, and Blake Lindau shoot hoops on the backyard court of the Badertscher family on Janesville’s east side Monday evening. The brothers said it was their third time playing that day on the court that was built in 2003 as a place for brothers Chance, Cy and Cade Badertscher and their friends but has since become a neighborhood gathering spot. 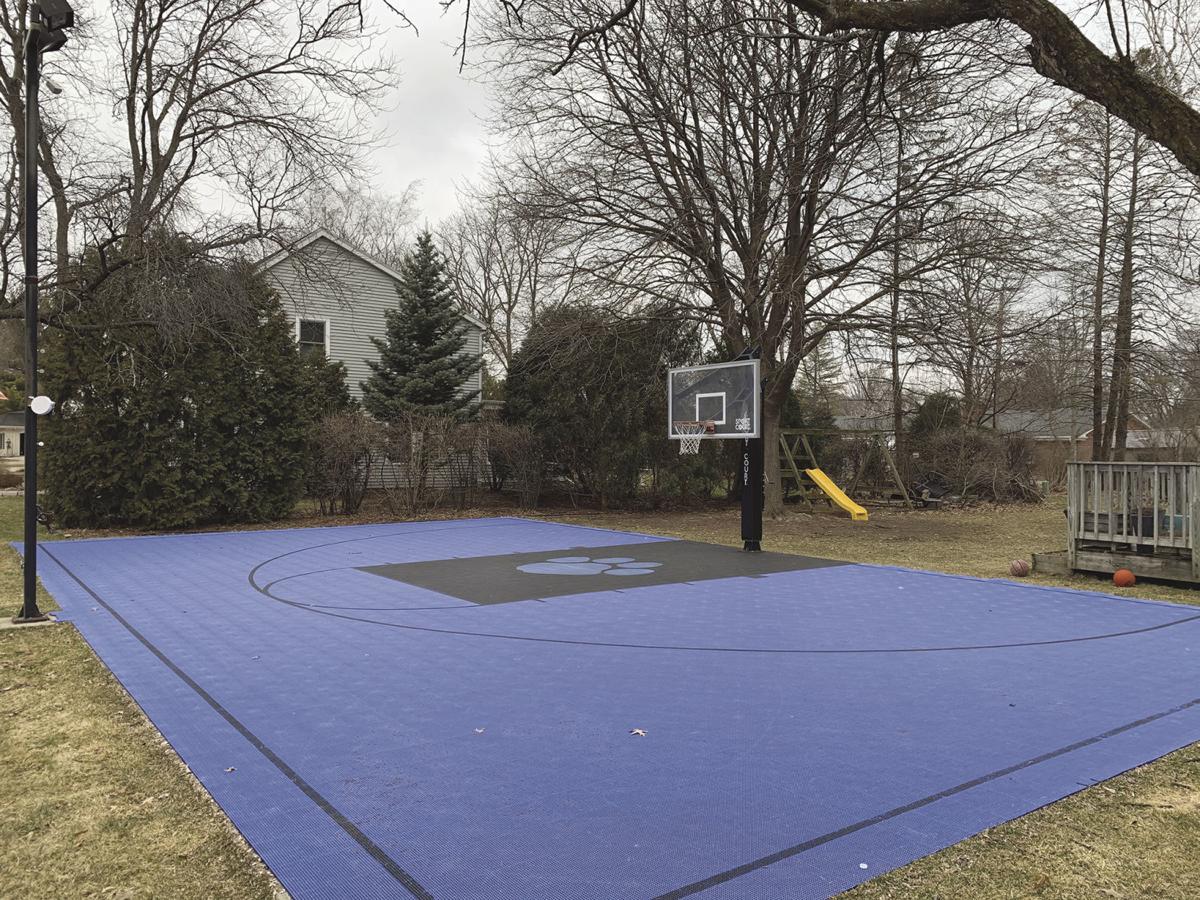 The half court in the backyard of the Badertscher family in Janesville sits empty Monday afternoon. The setup, which includes LED lighting, can typically be found hosting between one and a dozen neighborhood kids.

Janesville’s Grant, left, and Blake Lindau shoot hoops on the backyard court of the Badertscher family on Janesville’s east side Monday evening. The brothers said it was their third time playing that day on the court that was built in 2003 as a place for brothers Chance, Cy and Cade Badertscher and their friends but has since become a neighborhood gathering spot.

The half court in the backyard of the Badertscher family in Janesville sits empty Monday afternoon. The setup, which includes LED lighting, can typically be found hosting between one and a dozen neighborhood kids.

An ice cream truck driver, a Golden State Warrior and a Division I offensive lineman probably would have made for an entertaining team in a 3-on-3 basketball tournament.

Alas, the three of them were never on the Badertschers’ backyard basketball court.

Or at least not all at the same time.

All three figures are part of the 17-year history of the black and blue colored halfcourt setting on Janesville’s east side. Built on the heels of Janesville Craig’s latest trip to the WIAA state boys basketball tournament, Barry Badertscher gave his three sons and their friends a home-court advantage. And now that they are all grown and out of the house, the court has begun serving the next generation of neighborhood kids.

“It’s hard to believe it’s been almost 20 years,” Barry Badertscher said. “I’ve let everyone know it’s a park, and anyone is welcome to use it at any time. I’ve got a little mini fridge with waters and ice pops for them, and there’s kids there all summer long just playing.”

A place to play

The initial idea for the court came when Badertscher saw the court of a family friend.

“I had more room in my backyard than he did,” Badertscher said. “So I just said, ‘It’s gotta be bigger and better than Joe’s.”

The family enlisted Sport Court to build a full half-court setup out back at the corner of Cherokee Road and Apache Drive.

The customized court was quite the upgrade from what Chance Badertscher, a Craig graduate who was a senior in 2003 when the Cougars made their last trip to state, was accustomed to.

“If you saw the hoop I had to shoot at in the driveway, it was slanted, so the court was definitely an upgrade,” said Chance, now a lawyer in Chicago still competing on the rec league level. “That summer after we finished high school, we had a lot of great pickup games. Two-on-two, three-on-three, everybody that was on that high school team came over that summer.”

Cy Badertscher, the middle brother and a 2011 Craig graduate, was known more for his jumping abilities as a four-time state track and field qualifier. But he credits the backyard basketball court for helping pave the way to competing in jumps at the college level.

“When my dad went to work, we would lower the hoop and have dunk contests,” Cy said. “Coincidentally, I never developed much of a shot. But my first legitimate, regulation-height dunk happened on that court.”

But the youngest brother, Cade, said his dunking days were cut short when his grandfather drove by one day, saw the hoop had been lowered and delivered a stern lecture.

“He laid us a new one,” said Cade, a 2017 Craig grad who played this past winter for Western Tech in La Crosse. “He said if I ever see you out on this court dunking again, it’ll be over. We were scared.

“There’s definitely a lot of stories from this court. Every relevant basketball player in the last 10 or 15 years from Janesville Craig has probably played on this court.”

The driver, the first-round pick and the Badger

The court is not reserved solely for basketball players.

One day, a driver for the frozen foods company Schwan’s pulled his delivery truck over and wound up in the middle of a one-on-one game, with ice cream for all children present on the line.

“If he loses, we all get ice cream,” Cy remembered. “So we all turned to Cody Dare to be our sherbet savior. ... He played on the court as much, if not more, as I did and was 10 times the player. The Schwan’s man greatly underestimated the energy level of a 12-year-old and the desire we had for ice cream.

“By the time ‘game point’ arrive, his pants were rolled up and sweat was soaking his uniform. He drove to the hoop, with Cody on his hip, barely got off a layup that must’ve rolled around the rim three times before falling in.”

A dozen or so kids were suddenly denied ice cream.

“He hit the game-winner, got in his truck and drove off,” Cade said. “I thought he was just going to give it to us anyways, but he didn’t.”

Cade Badertscher played against Poole on the AAU circuit and invited the eventual Michigan Wolverine and No. 28 overall pick in last year’s NBA Draft over to the court.

And more recently, a passerby might have seen a Badgers defensive tackle on the court.

Keeanu Benton, who played as a true freshman for Wisconsin’s football team this past season, spent plenty of time there.

“I thought he was really strong the first time I tried to box him out,” Cy said. “I empathize with the Big Ten offensive linemen that have to deal with him now.”

The Badertscher brothers have all graduated and moved out, but the court still gets used most days.

Barry has even been known blow the snow off the court so kids can use it in the winter.

“I shot 10,000 shots here last summer,” said Grant Lindau, who was shooting hoops on the court around 5 p.m. Monday for the third time that day. “I got a shirt and was recognized at a Craig basketball game.

“I like that Mr. Badertscher lets us play, and neighbors come all the time, too.”

“I like how it goes down to 7 feet and we can dunk,” Blake Lindau added.

The court even has an LED lighting system so neighborhood kids do not have to go home when the sun goes down.

With school out of session for at least the next couple of weeks due to measures enacted to combat coronavirus, the court will almost certainly see daily use.

“Some of my favorite memories have been the times I visited home and saw new faces playing on the court,” Cy Badertscher said. “It warms my heart to see the impact that court has had with my friends and kids from the current neighborhood.

“My mom and dad have given so many kids the opportunity to be active, socialize and have a healthy outlet.”

It’s been healthy for the parents, as well.“I moved my office from downtown last spring and worked out of the house,” Barry Badertscher said. “So I spent the summer last year working on the deck almost every day. Those kids were on the court every day yelling over to me.

“It was the most fun summer I had in ages.”

Schmoldt: Help us tell the stories of your favorite local sports memories

I have consistently received two questions since coronavirus essentially knocked out all sports at every level for the foreseeable future.