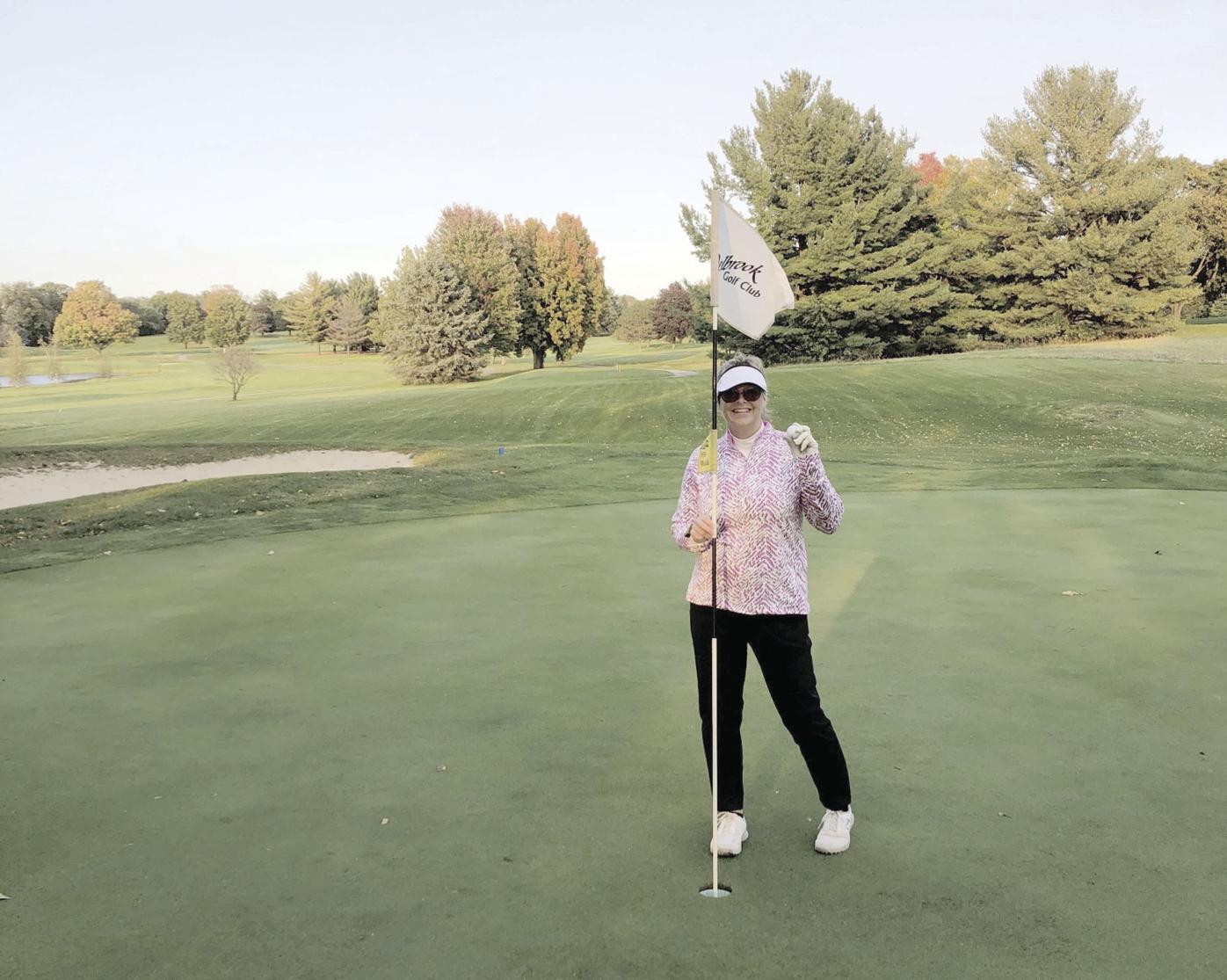 Delavan's Michelle Rush holds up her ball after making a hole-in-one on the No. 4 hole at Delbrook Golf Club's Middle Course on Oct. 5. It was Rush's first career hole-in-one, and she carded another one five days later. 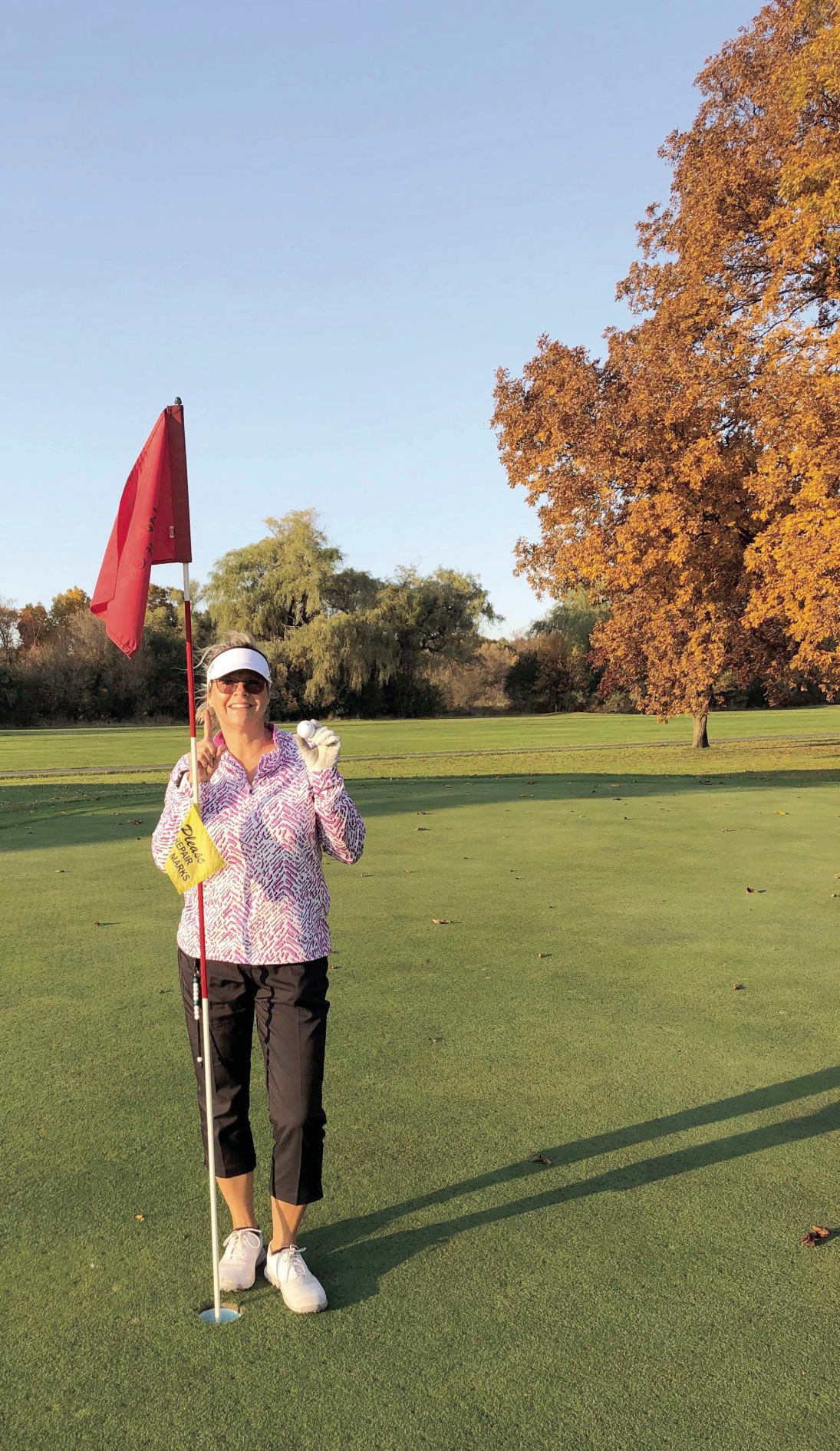 Delavan’s Michelle Rush holds up her ball after making a hole-in-one on Delbrook’s North Course hole No. 7 on Oct. 10. It was Rush’s second hole-in-one in five days.

Delavan's Michelle Rush holds up her ball after making a hole-in-one on the No. 4 hole at Delbrook Golf Club's Middle Course on Oct. 5. It was Rush's first career hole-in-one, and she carded another one five days later.

Delavan’s Michelle Rush holds up her ball after making a hole-in-one on Delbrook’s North Course hole No. 7 on Oct. 10. It was Rush’s second hole-in-one in five days.

She had already accomplished a feat at longer odds, though, so she figured she should at least try.

Rush, still a relative newcomer to the sport of golf, made her first career hole-in-one on Oct. 5 at Delbrook Golf Club in Delavan. She celebrated by promptly making her second career ace just five days later.

“When the second one happened, I hit it and just kind of looked over to my husband, and we’re both just like, ‘This is unbelievable,’” Rush, of Delavan, said. “I just said, no one is ever going to believe this.”

It is almost too good of a tale to make up.

Rush and her husband, Steve, began golfing more regularly last year, taking lessons from Brett Weber at Delbrook. The COVID-19 pandemic played a role in Michelle and Steve playing even more this summer.

Still, when the holes-in-one were carded, Michelle was using a set of Allante Knight golfclubs she said were purchased about 20 years ago from a garage sale.

On Oct. 5, she pulled a 3-wood from her bag and teed off the 105-yard fourth hole at Delbrook’s Middle Course.

“Steve was like, ‘I think that’s going to land on the green. ... Wait, I think it’s going in!’” said Michelle, who said she typically shoots nine-hole scores in the upper 50s. “It landed on the green and just kind of rolled in. From what we’ve heard and what people say, we’re lucky that we got to see it.”

On Oct. 10, Michelle was on the seventh hole on the North Course and pulled a 7-wood for a 100-yard shot. And once again, she felt good about her swing from the moment club met ball.

“Then it’s the luck of the roll,” Michelle said with a laugh. “There’s a few friends in our golf group that have been playing more than 30 years who have never got a hole-in-one. I almost feel bad, like I stole them.”

Weber said he is still waiting for his first hole-in-one in more than four decades of playing.

“It’s just a crazy remarkable story. I’ve been around the game my whole life and have never heard anything like it,” Weber said. “They are at the infancy stages of learning the game and trying to understand everything. But there has definitely been improvement. They’ve had their all-time best scores recently and a couple holes-in-one now, so I think they’re on the right path.”

The recent success led Michelle to upgrade to a brand new set of clubs.

Steve, who was the witness for both of Michelle’s holes-in-one, told her to make another purchase, as well.

“After the first one, I said, you know this is so rare, right? People go their whole life and never get a hole-in-one,” Steve said. “So that was pretty cool. Then five days later, we’re playing and we’re almost done and it’s getting cold out and she hits another one.

“I just said, ‘On the way home, we’re stopping to buy a lottery ticket.’”

Michelle’s ticket did not match a single winning number that day.

She had already defied the odds.