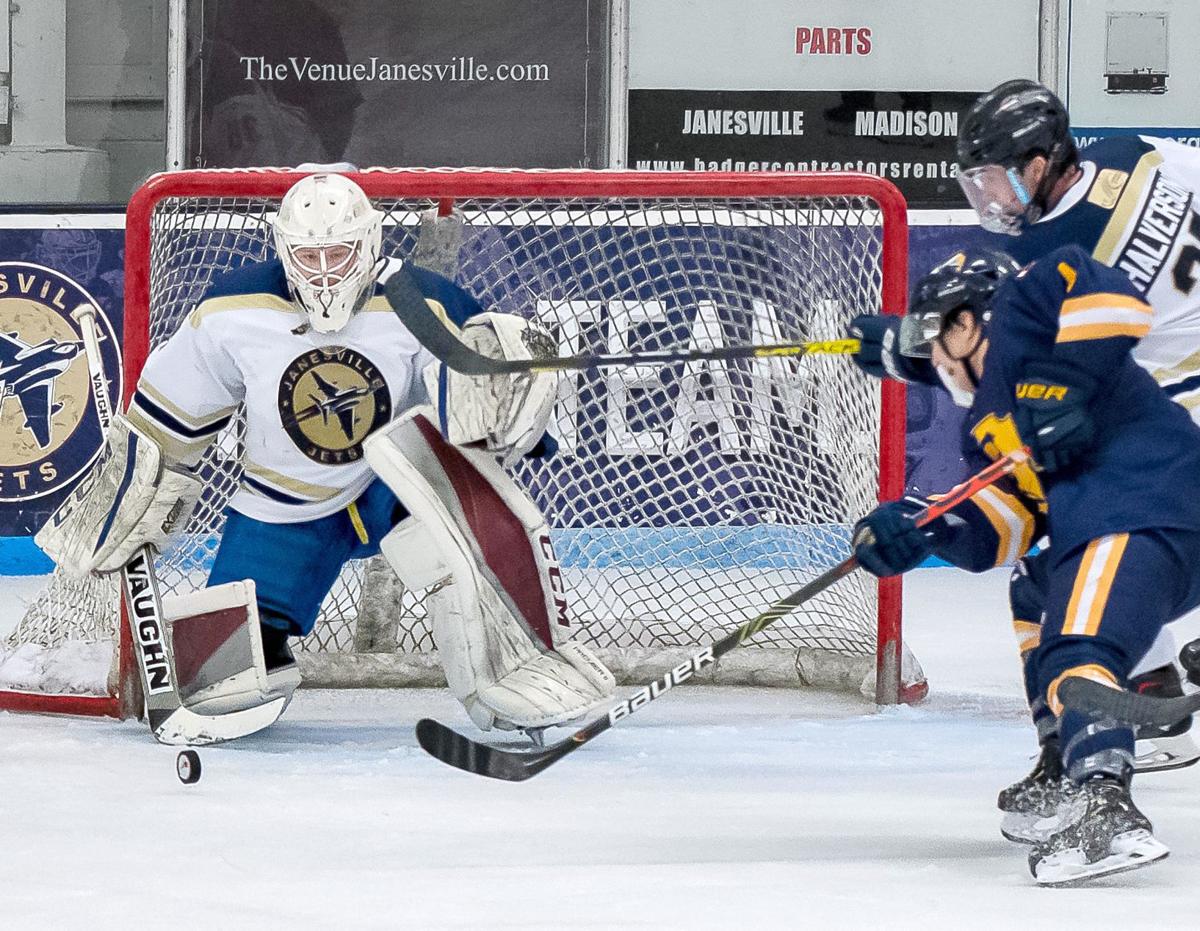 Janesville Jets goalie Riley Sims tracks a puck in a 7-3 win over the Springfield Jr. Blues Jan. 31 at Janesville Ice Arena. Sims taking control over the second goalie spot for the Jets has stabilized the team. 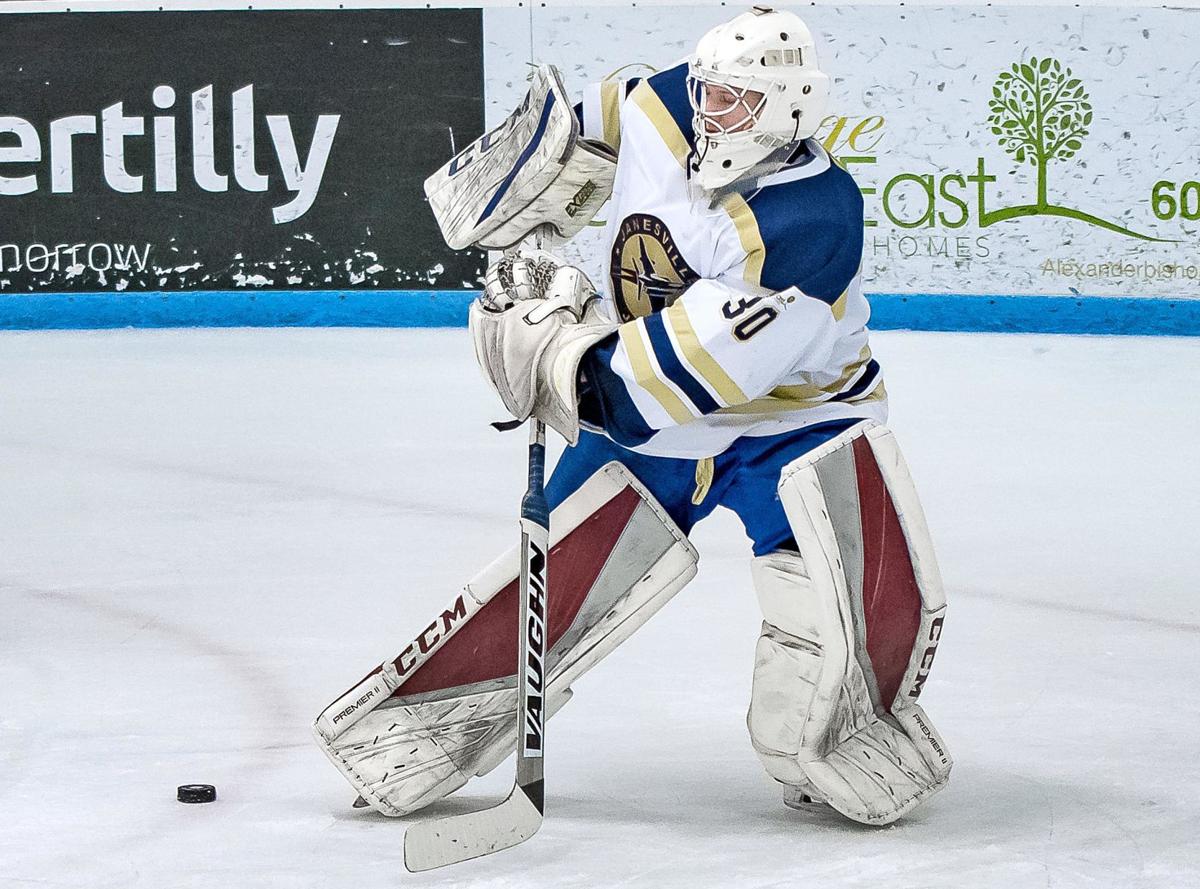 Janesville Jets goalie Riley Sims plays the puck in a Jan. 31 game against the Springfield Jr. Blues. Sims is expected to play a big role as the Jets push for the NAHL playoffs in the coming weeks.

Janesville Jets goalie Riley Sims tracks a puck in a 7-3 win over the Springfield Jr. Blues Jan. 31 at Janesville Ice Arena. Sims taking control over the second goalie spot for the Jets has stabilized the team.

Janesville Jets goalie Riley Sims plays the puck in a Jan. 31 game against the Springfield Jr. Blues. Sims is expected to play a big role as the Jets push for the NAHL playoffs in the coming weeks.

Riley Sims threw his arms up and jumped into the boards in celebration after winning a competition drill at Janesville Jets practice Wednesday.

The Janesville Jets goalie donned a wide smile as he jeered at one teammate on the losing end of the drill and high-fived a fellow winning teammate.

While he didn’t play often right away with the local North American Hockey League team, Sims embraced his role as the team’s second goalie and has given the Jets both a sense of security and positivity from the back end.

More starts could be coming, too. Janesville coach Corey Leivermann said the addition of Sims has given the team two starters instead of a traditional starter and backup.

“At the end of the day (starter) Grant Riley needed to be pushed, and we found a goaltender that did that,” Leivermann said. “We’re happy with our 1A, 1B right now. They work well together, they mesh well together and they both want to learn.”

Sims has won three of his five games with the Jets this year, including a 7-3 victory over Springfield in his last start Friday night. Being the backup has been tough on him at times, but Sims said he has no problem taking a backseat every once in a while and helping the team win.

With the 17-year-old Riley being scouted for the 2020 NHL entry draft in late June, Sims knew he would begin as the defined backup goalie. Despite his limited game action, he does his best to be ready when the team needs him.

“It’s tough sometimes, but I just try and be there for all the boys and try and give all my effort in practice, and that’s important to me,” he said.

“It’s more how I practice every day. Showing up with a game mentality and doing my routine every day. Even though it is practice, I keep my game routine so when I do get a game I’m fresh and ready to go,” he said.

Sims joined the team at a time when both he and the Jets were looking for a fresh start.

Janesville had used five different goalies behind Riley when the 19-year-old Edmonton, Alberta native arrived in early December from the National Collegiate Development Conference, which is another junior hockey league. Sims came to Janesville because it’s a “factory” for goalies and he wanted to keep growing as a hockey player, he said.

Leivermann said the fit was close to perfect.

“When I talk to schools right now, I mention Riley Sims because we’ve had a very good track record with developing goalies,” Leivermann said. “Everyone needs a good goaltender, and for us it’s good to have a 1A, 1B. At the end of the day Riley Sims knows he’s going to get looks from colleges when he gets the chance to start.”

Ahead of a weekend where Janesville will play three home games against Kenai River in as many days starting tonight, having two goalies you trust is important, Leivermann said.

“That’s the one-two punch we’ll be with for the rest of the year,” Leivermann said. “We’re happy with our goalies, and right now it’s straight numbers and wins and losses.

“You win, you stay in, and if you have a clunker, we’ll go back to the other guy. That’s the message for these two,” he said.

Riley will start tonight with Sims playing Friday. The starter of Saturday’s game will depend on which goalie has the better start in his first game.

The 6-foot, 185-pound Sims has shown his athleticism this season, something he said is important as a smaller goalie.

“I’m a very athletic goalie,” Sims said. “I’ve always been undersized my whole life. I’m not a 6-(foot)-4 player so I try and challenge the shooter as much as I can without giving backdoor chances. Speed is a big part of my game.”

His goalie partner said the Jets are better because Sims is on the roster.

“It’s been great since he (Sims) got here,” Riley said. “It’s taken the pressure off me and the team. It gives a solid one-two punch every weekend.

“He’s a great guy in the locker room,” Riley said of Sims. “He puts a smile on your face, and he just keeps the game fun.”

Leivermann said he thinks the duo can help Janesville move up the standings, which the team will try to do with tonight’s first game of the weekend series at the Janesville Ice Arena.

Multiple victories this weekend could push the team into third place in the Midwest Division after being stuck in fourth for the last several weeks. To do that, Leivermann said his team will need to continue its hard-working, simple game that has them on a four-game winning streak.

“It’s that old cliche about if you don’t work, you’re going to get outworked by other teams,” he said.

“When you have 21 very talented, high hockey IQ kids that can skate that just compete, you got a good chance to win if you mix in some good goaltending, and that’s been the mix we’ve used lately. It comes down to our pure effort and letting our skill and our skating take over.”