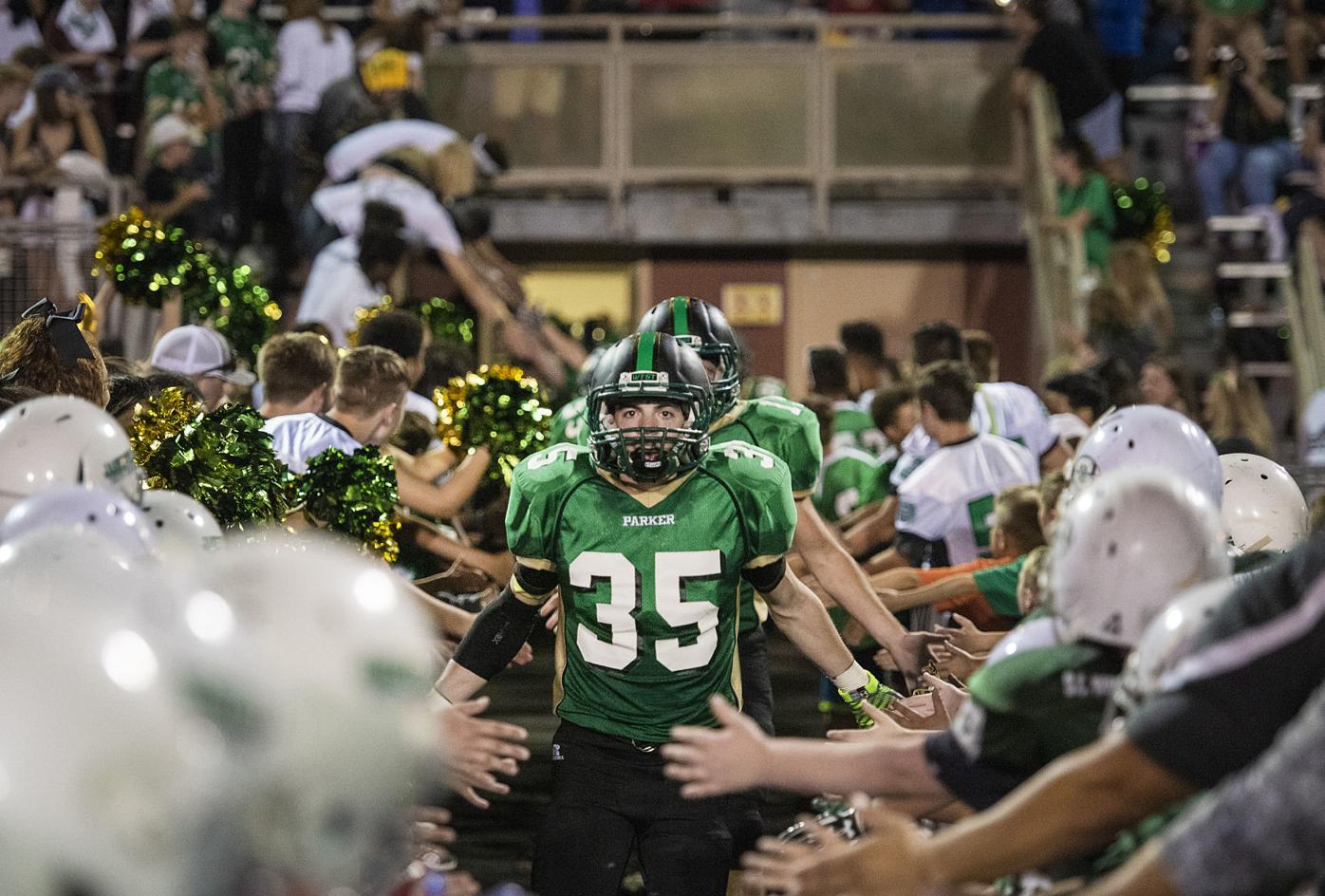 The Vikings led by Parker’s Brandon West (35) receive high-fives as they return to the field for the second half of their game against Madison East on Friday, September 14, 2018, at Monterey Stadium in Janesville. 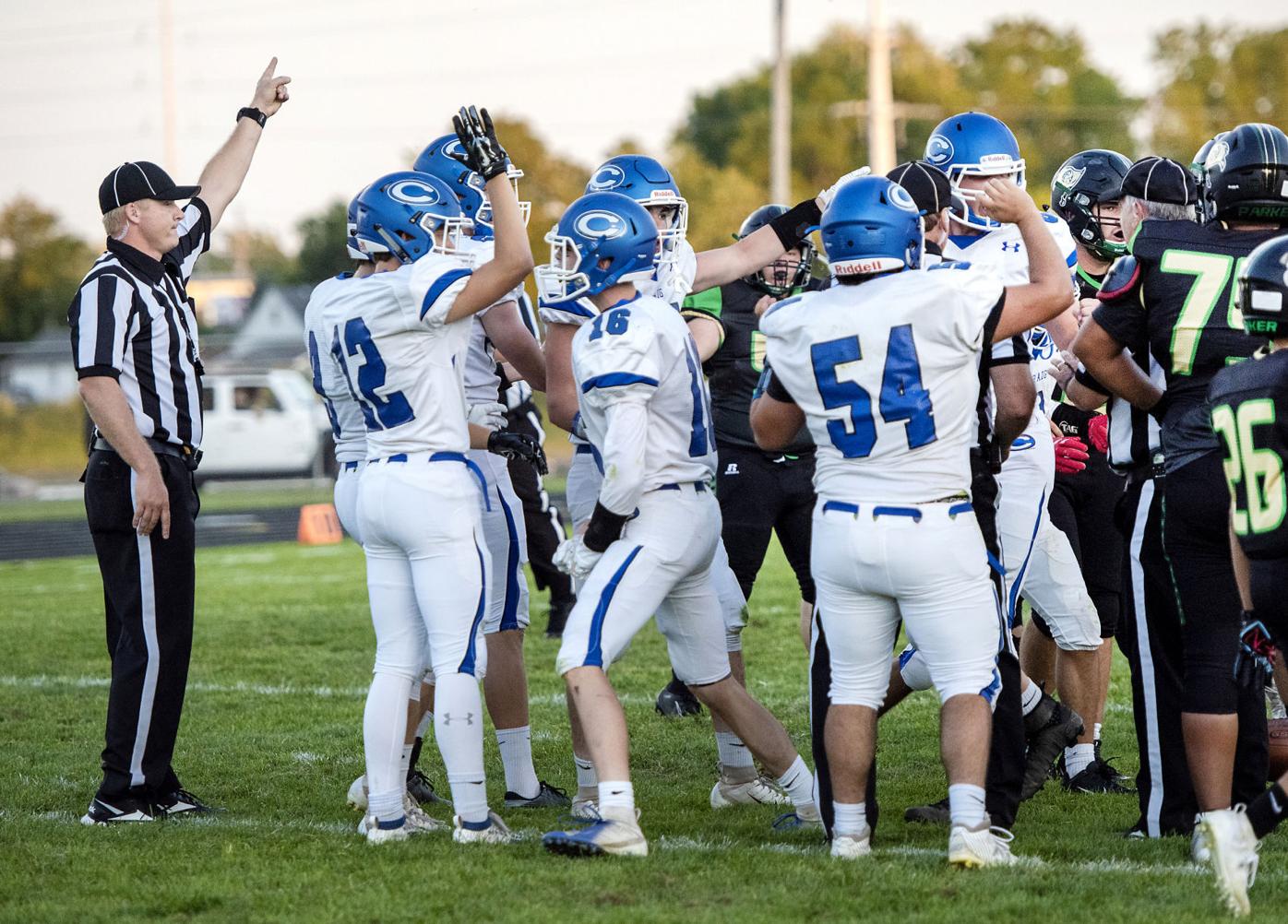 The fate of this season’s Janesville Craig-Janesville Parker football game, along with all other fall sports, might be determined by the WIAA this week in the midst of the coronavirus pandemic.

The Vikings led by Parker’s Brandon West (35) receive high-fives as they return to the field for the second half of their game against Madison East on Friday, September 14, 2018, at Monterey Stadium in Janesville.

The fate of this season’s Janesville Craig-Janesville Parker football game, along with all other fall sports, might be determined by the WIAA this week in the midst of the coronavirus pandemic.

In high school football, as the play clock ticks down to 10 seconds, the back judge raises an arm in the air to let the players and coaches know.

With five seconds remaining, that arm starts waving to count down toward a delay-of-game penalty. Snap the ball soon, or it will cost a team five yards.

The arm isn’t waving yet on the play clock to determine what the fall high school sports season will look like in Wisconsin. But it is definitely in the air serving notice to coaches, players, officials, parents and fans that the deadline for decisions is looming.

With school districts evaluating the latest COVID-19 data and determining how to approach learning this fall, and with the scheduled start of high school football practice just over two weeks away, this week could be a pivotal one when it comes to determining a plan for high school sports.

“There’s a lot going on this week,” Janesville Craig athletic director Ben McCormick said. “I thought our superintendent (Steve Pophal) said it extremely well at the Board of Education meeting. He said there’s going to be differing views ... and we’re trying to find that sweet spot. And a sweet spot doesn’t exist.

“And he’s right. No matter what you do, there’s going to be the other side to it, where people aren’t going to be satisfied with the outcome. You’ve just got to remember we’re in a global pandemic, and we’re in a different time than we’ve ever experienced. There’s a lot of tough decisions to be made.”

The WIAA laid out four different potential options for spring sports when it sent out a survey to district superintendents over the weekend. WisSports.net first reported on the “2020 School Sports Survey.”

The survey asked for each district’s preference on how to approach the fall with the following options:

Begin sports programs as they are currently planned and scheduled

This option is looking bleaker, at least for the Janesville schools and the Big Eight Conference.

The Madison school district announced last week it would start the fall semester with virtual classes only for at least the first quarter.

Athletics officials quickly told the Wisconsin State Journal that virtual learning does not definitively mean sports will not be allowed. But the Big Eight has a virtual meeting scheduled Tuesday, and McCormick expects Madison Memorial, West, East and La Follette will not be allowed to play.

“I would venture a guess with Madison starting virtually ... that they aren’t going to have their kids virtual learn during the day and then go be in physical contact and play sports,” McCormick said.

McCormick said he has heard rumors of at least two other Big Eight schools also beginning the fall with virtual learning. Seven of the 10 league schools are in Dane County, which has had some of the strictest regulations throughout the pandemic.

Earlier this month, the Janesville School District opened its schools for summer workout programs with restrictions and safety measures in place.

Delay the start of fall programs until Sept. 1

While football starts the earliest, with equipment handout scheduled for Aug. 3, all fall sports are currently scheduled to begin practices and competitions by the final week of August.

Some school districts have already delayed the start of sports. Last week, Waunakee announced it would not play its first football game until Sept. 4—the third week of the season and the start of conference play in the Badger Large, which includes both Janesville teams for the first time this year.

Pursue a plan ... that delays the fall sports until spring and moves spring sports into the summer

This plan sounds drastic at first blush, but McCormick and other area officials said over the weekend the plan appeared to be gaining significant steam.

WisSports and the State Journal reported last week the plan, outlined first by officials from the southwest portion of the state. Fall sports would be played during what has typically been the spring season, and spring sports would play during a summer season that extends into July. Winter sports would then be the first to start—for this school year only—with the potential to move those start dates to Jan. 1 of 2021 if COVID-19 data and regulations indicated such a need.

“There are pros and cons, obviously, but one thing it does is gives everyone the opportunity to play high school sports all three seasons,” McCormick said. “It would force kids to make some choices, too, because it would conflict with club (sports) ... and kids would need to decide what they want to do with their summer.”

Cancel all traditional and scheduled athletic programming for now

This option calls for officials to shut down fall sports for now and reassess “later in the year if/when conditions change.”

Exactly how the survey results will be used in WIAA decision-making is unclear. But WIAA officials told the State Journal last week that they will add a July meeting to address fall sports.

Several local athletic directors and coaches told The Gazette that they are among a growing group of officials that wants to see the WIAA make a definitive decision that allows the membership to move forward together—whatever that decision may be.

“It would be nice for everybody to be on the same page,” one source said. “They have said they’re going to hold a state tournament, maybe not no matter what, but if they have only 70 football teams or 50 soccer teams or whatever it may be. But that’s not a great solution.

“Everyone keeps passing the buck to everyone else and no decisions are made,” another area coach said. “WIAA needs to be the one who comes out and says, ‘This is what we are doing,’ and go with it.”

Indeed, the play clock is starting to tick down.

The back judge is checking the watch and preparing to start waving the countdown.