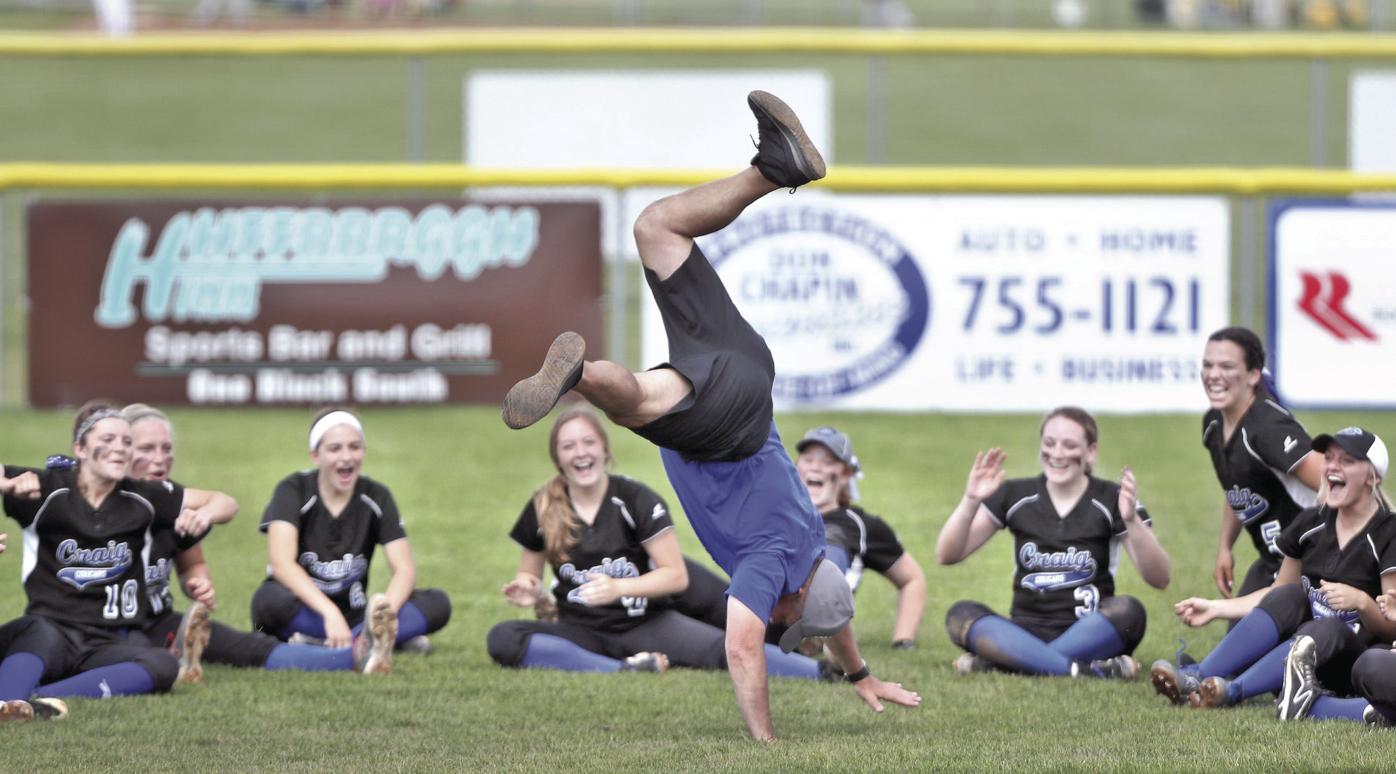 Former Janesville Craig softball coach Dan Bayreuther does a cartwheel after the Cougars beat Waterford in a WIAA Division 1 regional final in 2017. 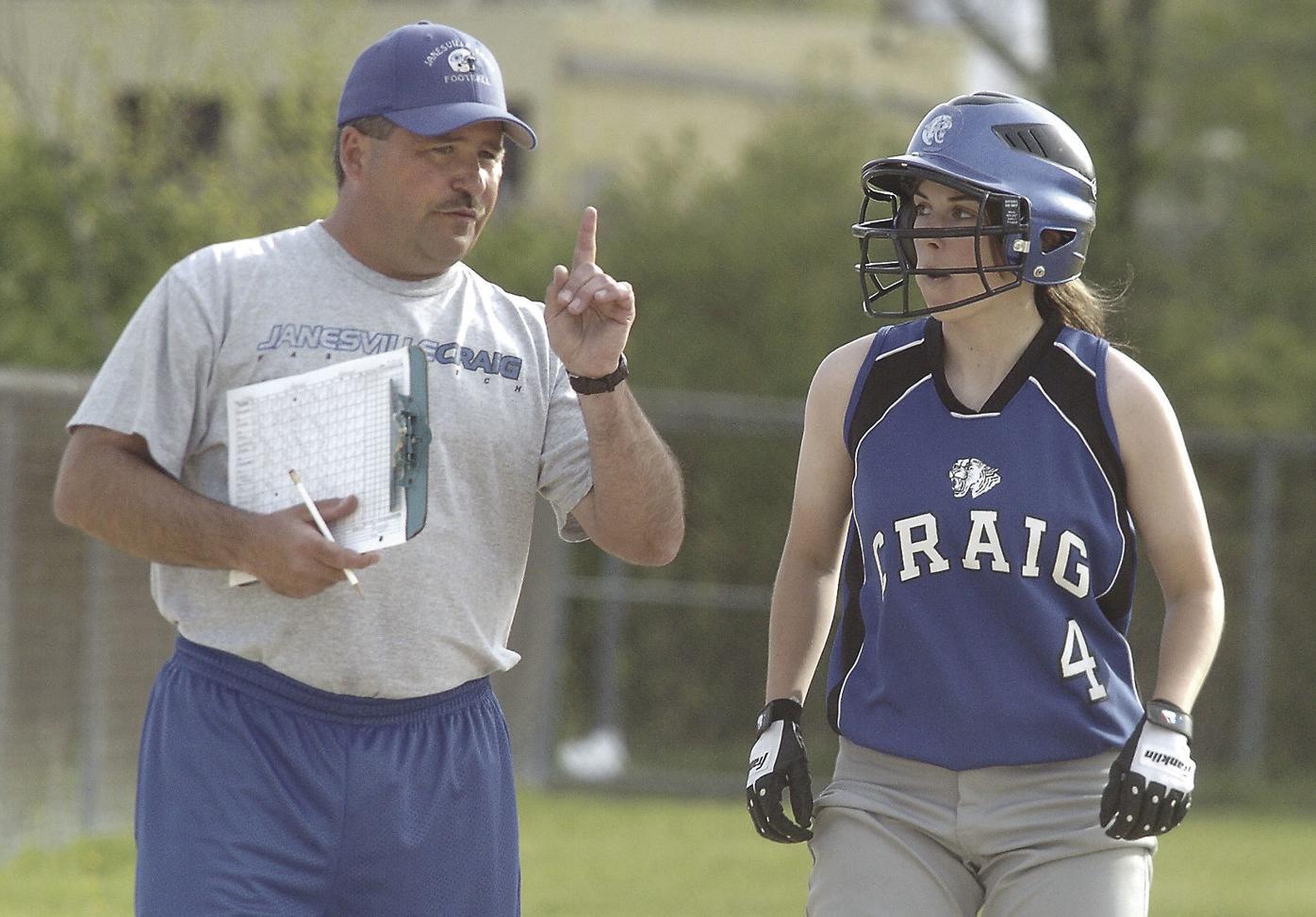 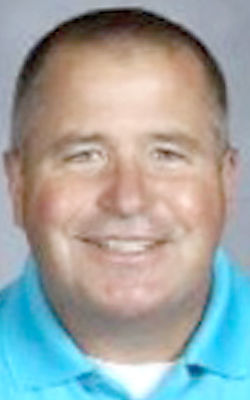 Former Janesville Craig softball coach Dan Bayreuther does a cartwheel after the Cougars beat Waterford in a WIAA Division 1 regional final in 2017.

Dan Bayreuther was a young physical education/health teacher at Rockwell Elementary School and assistant football coach at Fort Atkinson High School when Paul Olson walked up to him one autumn day in 1990.

Olson was a fellow teacher and a highly regarded softball coach at Fort Atkinson High.

Olson asked Bayreuther to take over for him.

Bayreuther reacted as if a high and tight fastball had zinged past his chin. He was a football and basketball coach.

“Paul,” the Jefferson native recalls saying, “I like softball, but I know nothing about it. He said, ‘Don’t worry. I’ll show you the ropes.’

Olson, a 2013 WFSCA Hall inductee, was one of the people who nominated Bayreuther for the honor.

With the retiring Olson as his assistant, Bayreuther started his 28-year softball coaching career in 1991.

It started with a bang as the Blackhawks made it to the WIAA state tournament that first season.

Bayreuther retired from teaching and coaching in 2018. He finished with a 394-229 record, which included a 350-210 mark at Craig. Twenty-four of his 28 teams finished with winning seasons.

But the Cougars always ran into the buzzsaw teams in the Southern Lakes Conference in sectionals.

“We were never fortunate to get out of sectionals,” Bayreuther said, and then mentioned the reasons why.

“Wimot, Westosha, Union Grove,” he said of the powers to the West. “If there is one thing that still irks me is that we never got to the state tournament at Craig.”

Bayreuther, who taught physical education at Marshall Middle School his final 11 years as a full-time teacher, kept coaching football as a Craig assistant until his retirement. He spent 34 seasons as a football assistant.

He is still active, despite undergoing knee replacement surgery this summer. He is umpiring baseball and has supervised Janesville hockey games with Dan Murray for more than 20 years. During the summer, Bayreuther is part of the grounds crew at Riverside Golf Course.

“I’m sort of a kindergarten cop,” he said, chuckling. “I have five classes. I take four or five kids who are challenged. I thoroughly enjoy it. I have one kid who I got to count to four. I really love it.”

That matches his feeling for coaching softball, a sport that will have him at Chula Vista in Wisconsin Dells on Saturday, Feb. 8, for the hall of fame induction.

He deflects any credit.

“I didn’t get one hit, hit a home run or strike out anybody,” Bayreuther said. “The kids have to do that. I was very fortunate to have good players. The last couple of years our youth program really helped.

“And I was so fortunate to have the assistants that I had,” Bayreuther continued. “There are too many to mention and most of them were unpaid.

“I was so fortunate to get Nicole Zellmer when she graduated from college. For the last four or five years, I considered her a co-coach.”