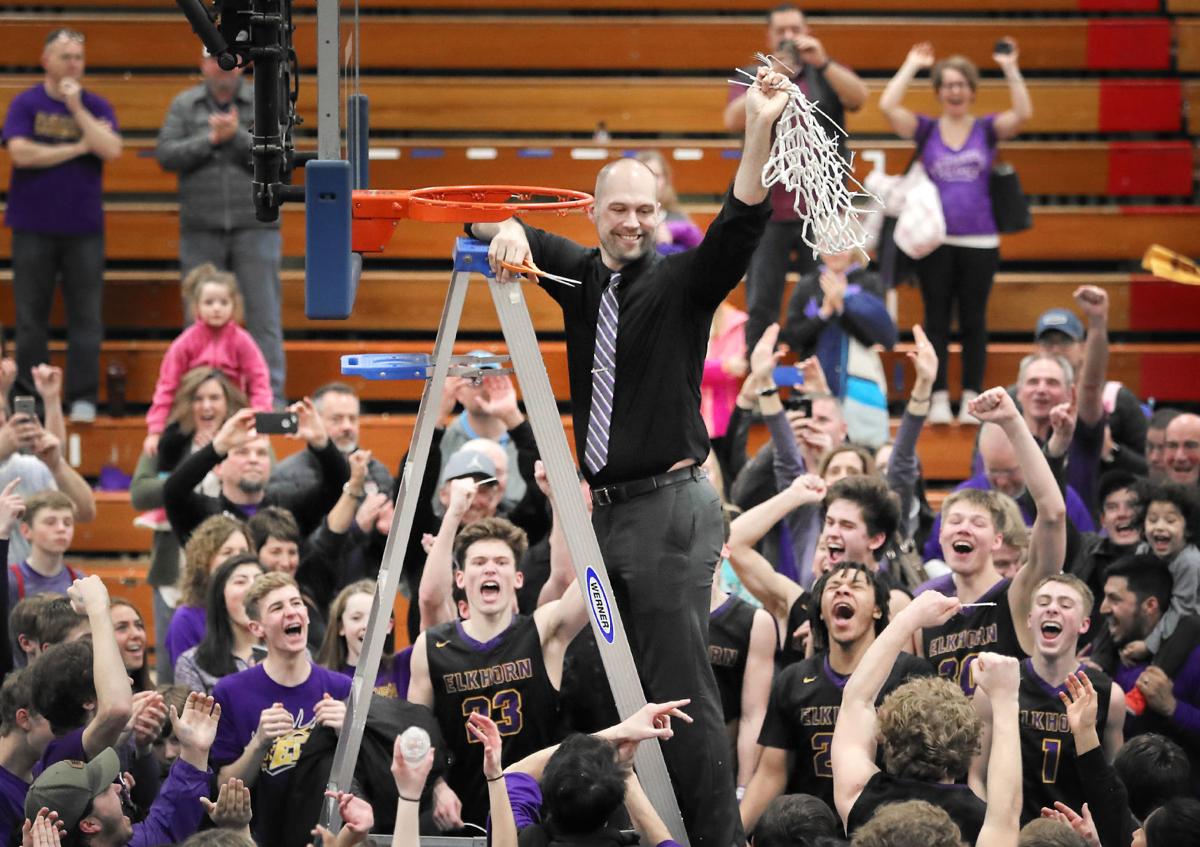 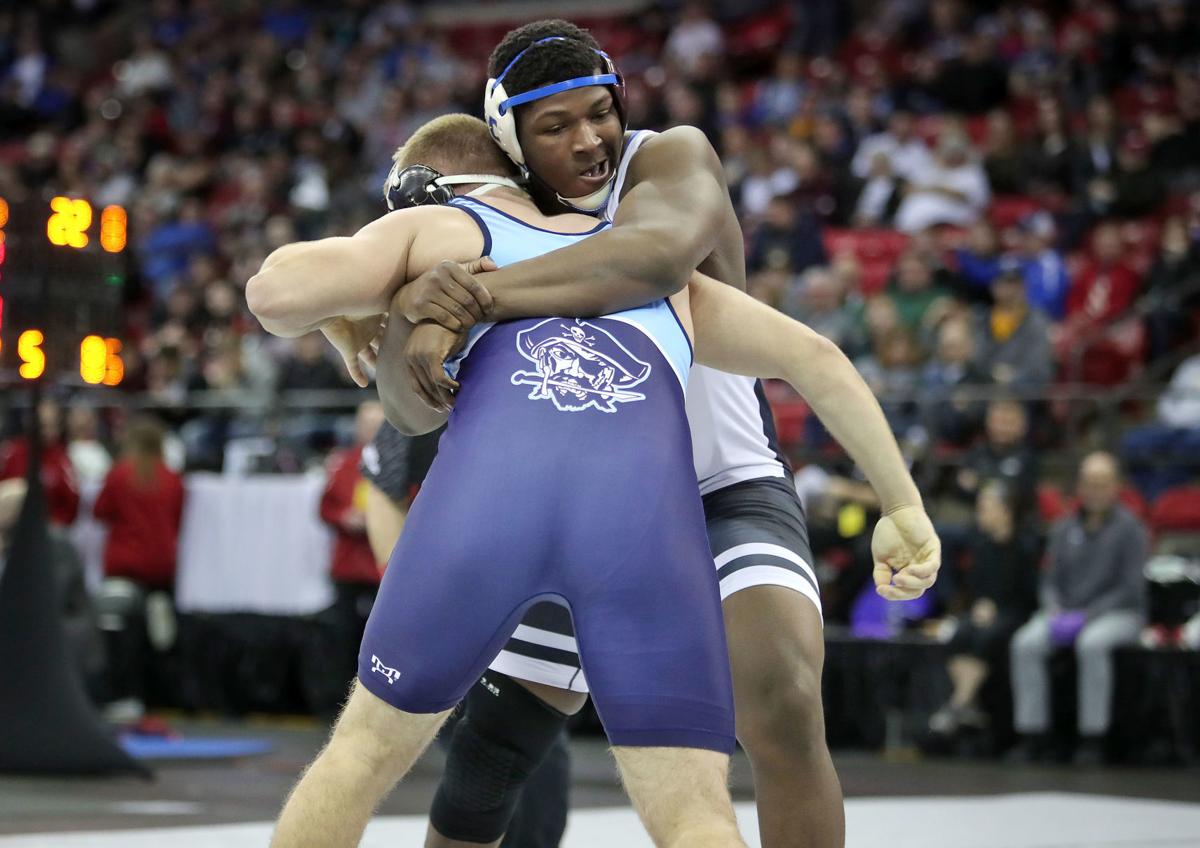 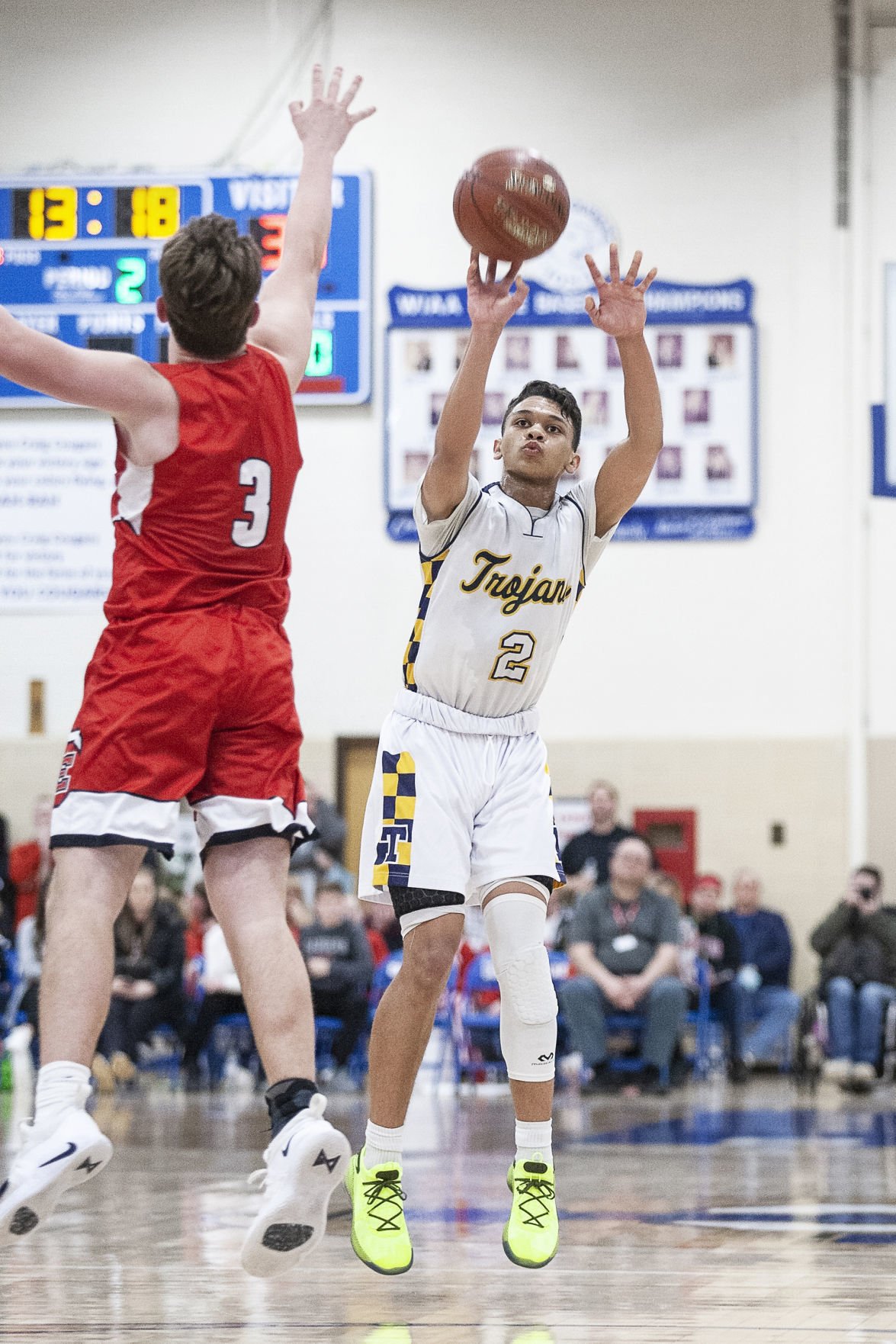 Turner’s Jordan Majeed (2) attempts a 3-point shot as Edgerton’s Clayton Jenny jumps to defend during the second half of a WIAA Division 3 sectional semifinal Thursday, March 7, 2019, at Janesville Craig High. 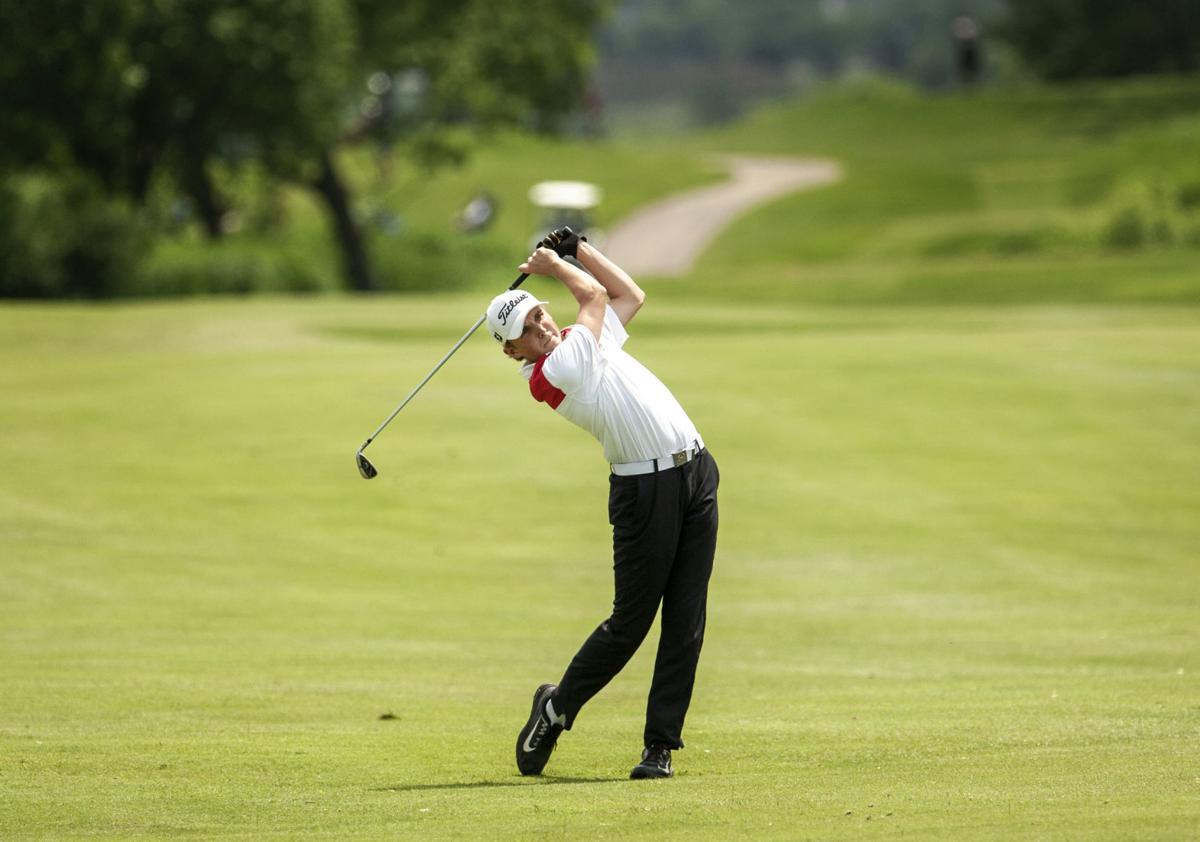 Edgerton High senior Joe Forsting hits his second shot from the fairway on No. 9 during the second round of the WIAA Division 2 state boys golf tournament Tuesday at University Ridge. With the tournament shortened to 27 holes due to weather, Forsting shot a nine-hole score of 41 Tuesday to finish at even par and win the state championship by one stroke. 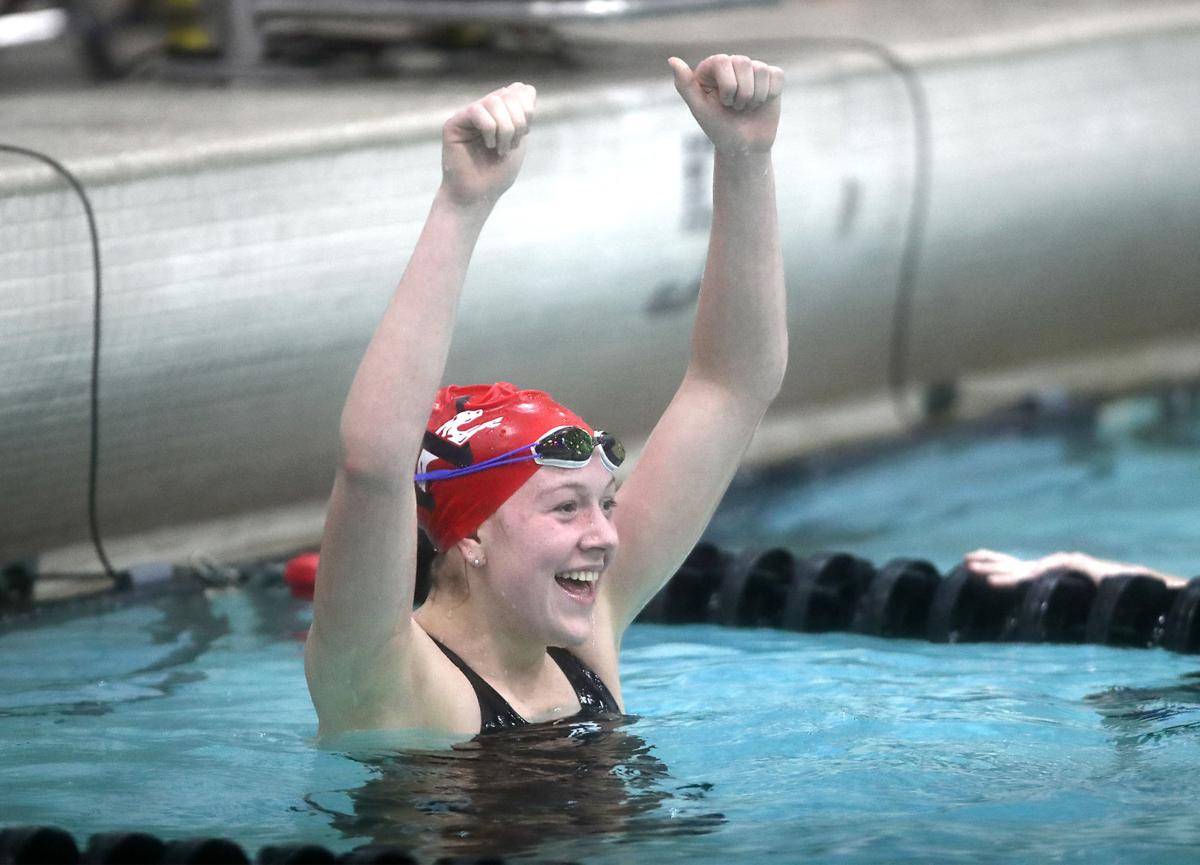 Whitewater’s Ella Houwers celebrates after finishing first in the 100-yard breaststroke for the second straight year at the WIAA Division 2 state girls swim meet on Friday. 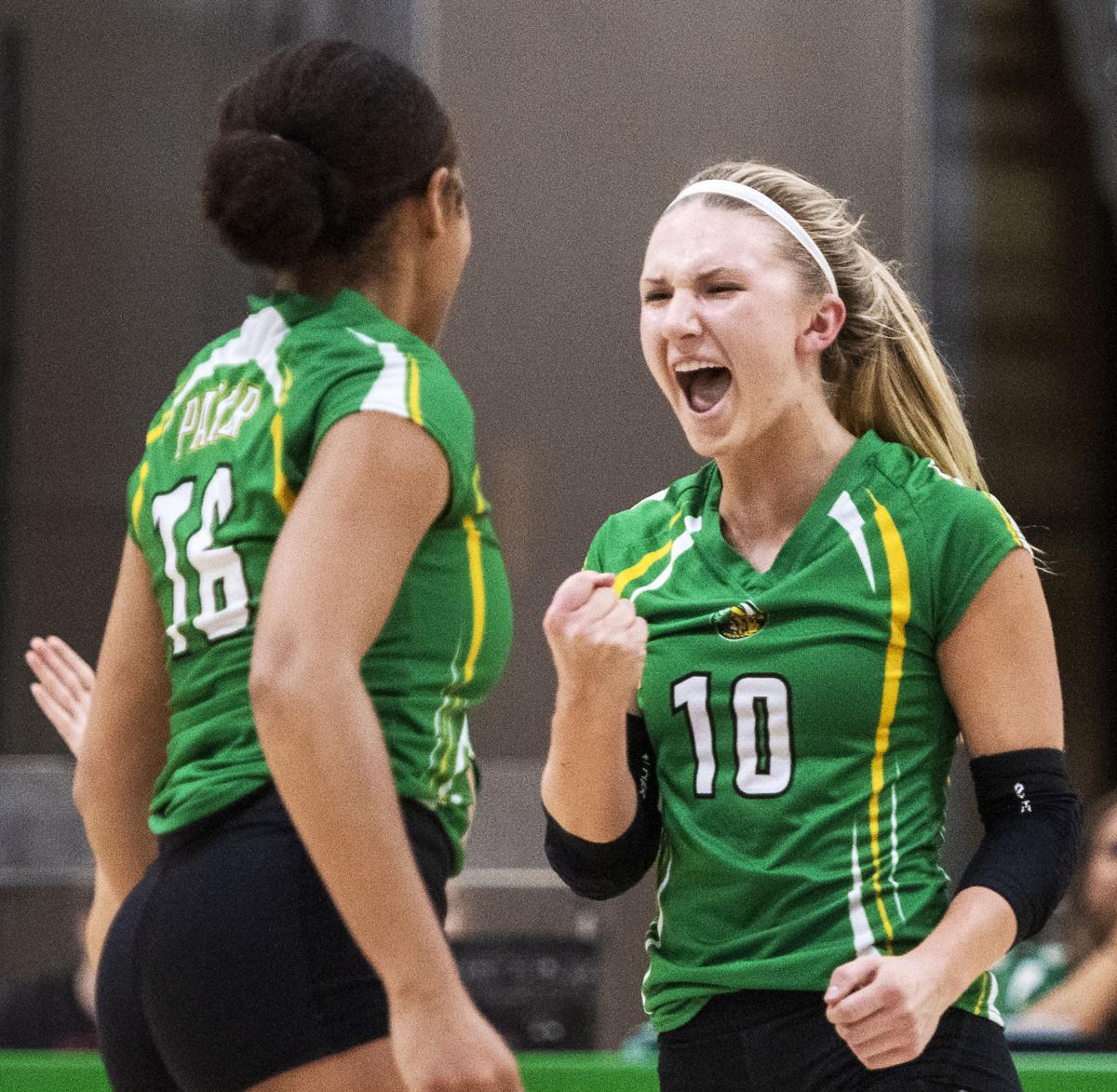 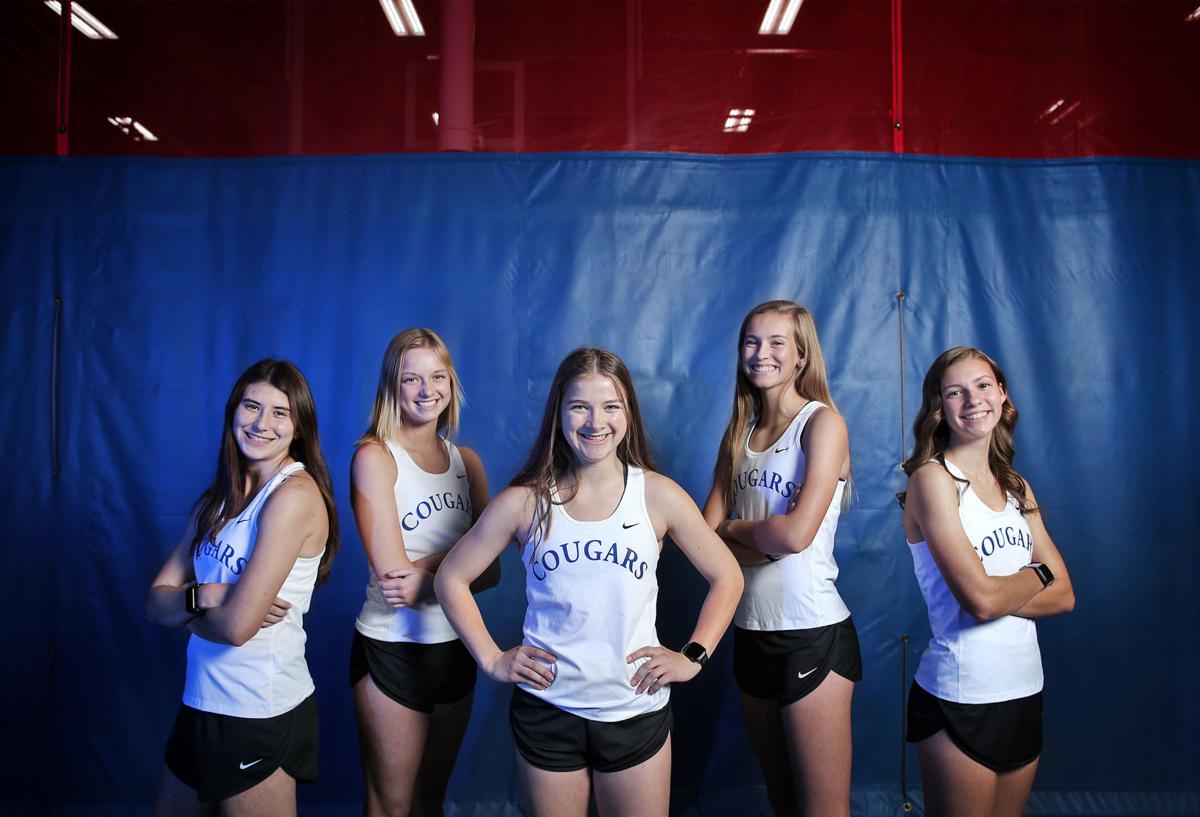 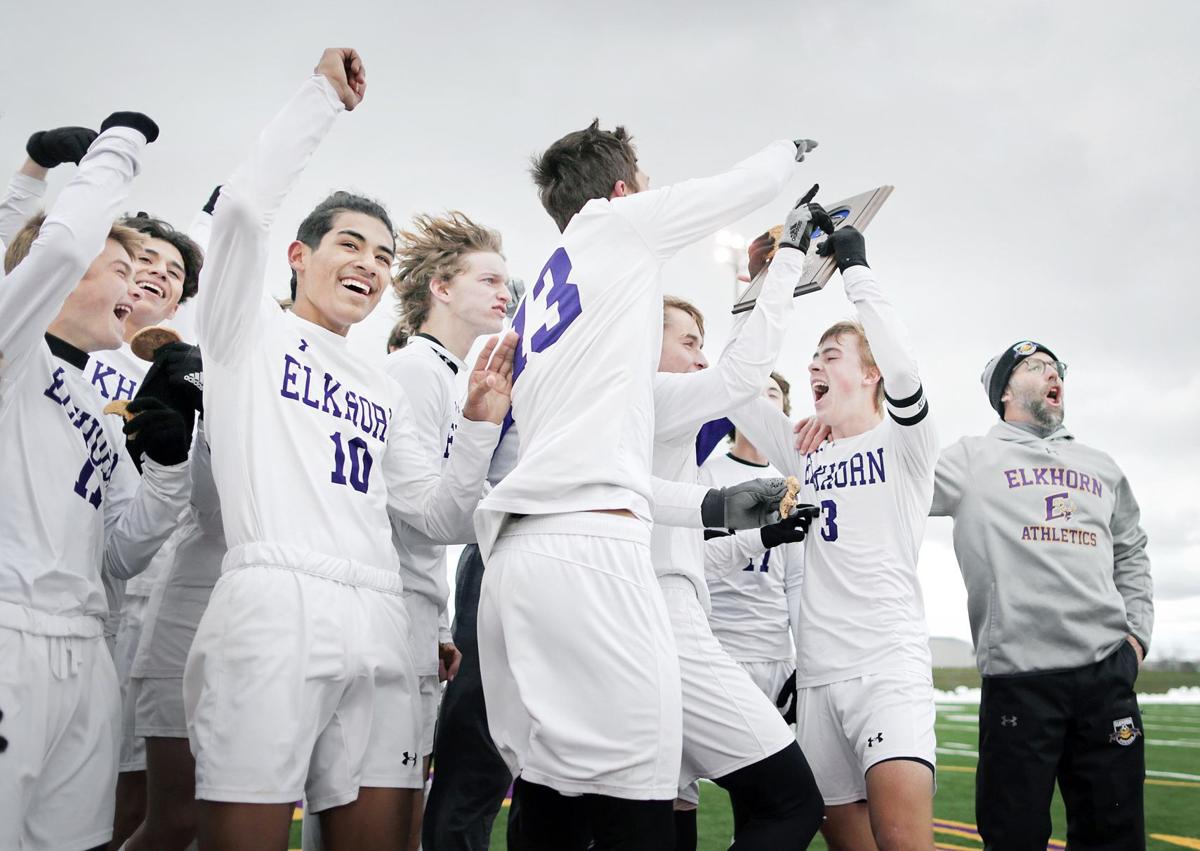 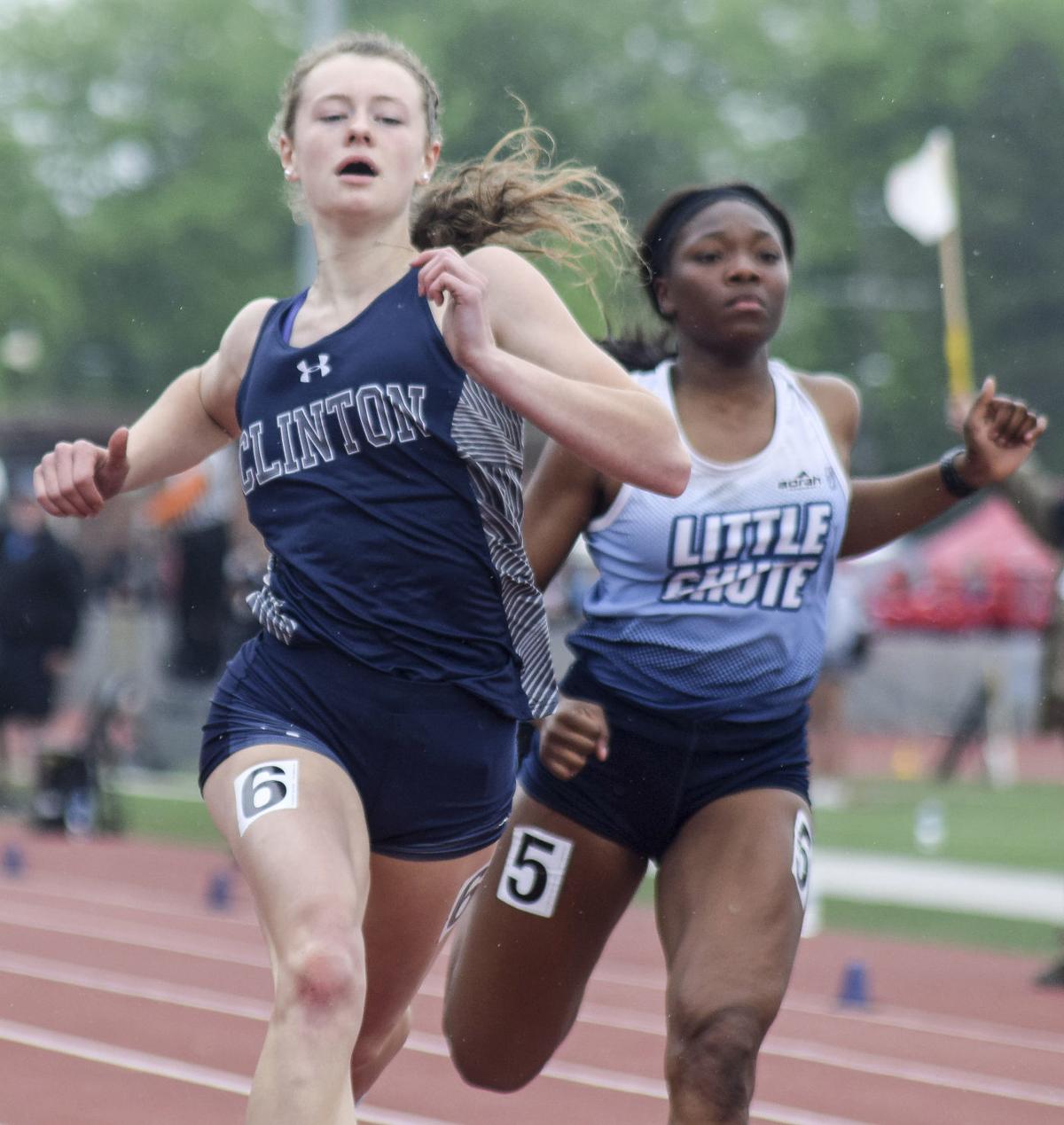 Clinton freshman Sylvia Johansen lunges for the finish line ahead of Little Chute's Alyssa Hutcherson during the Division 2 girls 100-meter finals on Day 2 of the WIAA state track and field meet at Veterans Memorial Field Sports Complex at UW-La Crosse on Saturday. 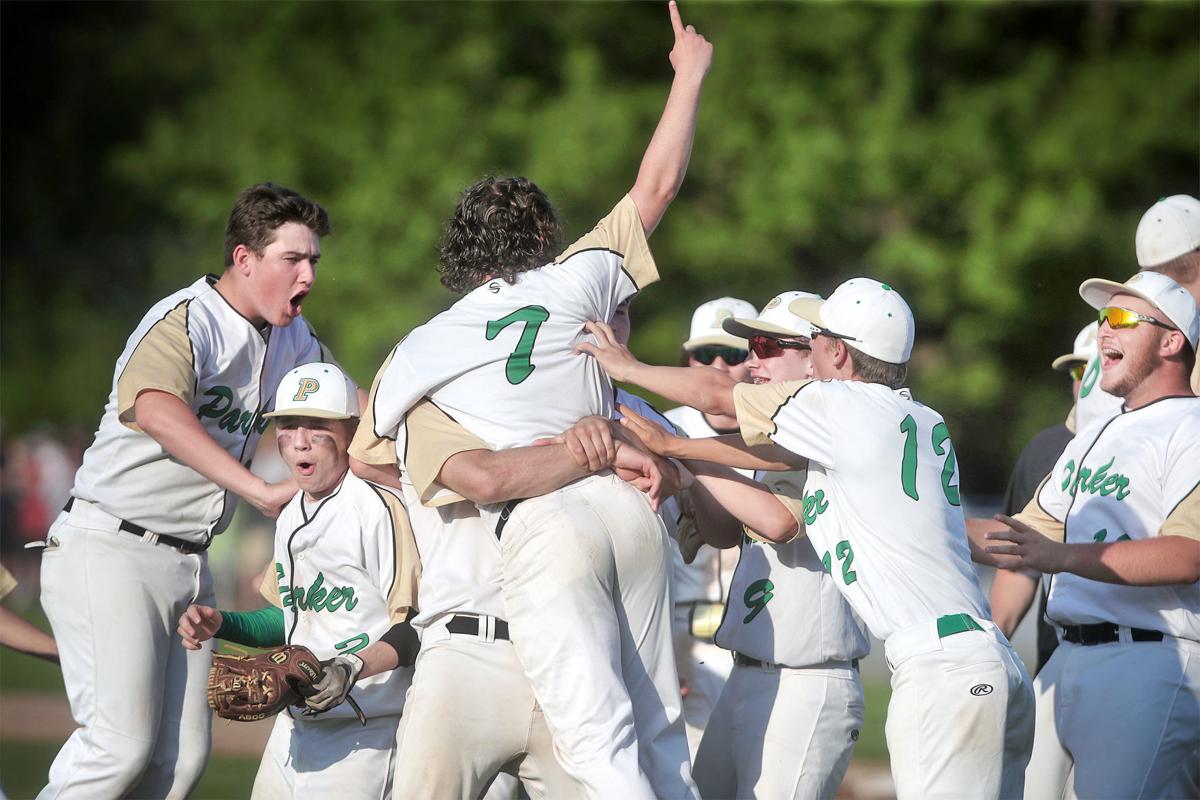 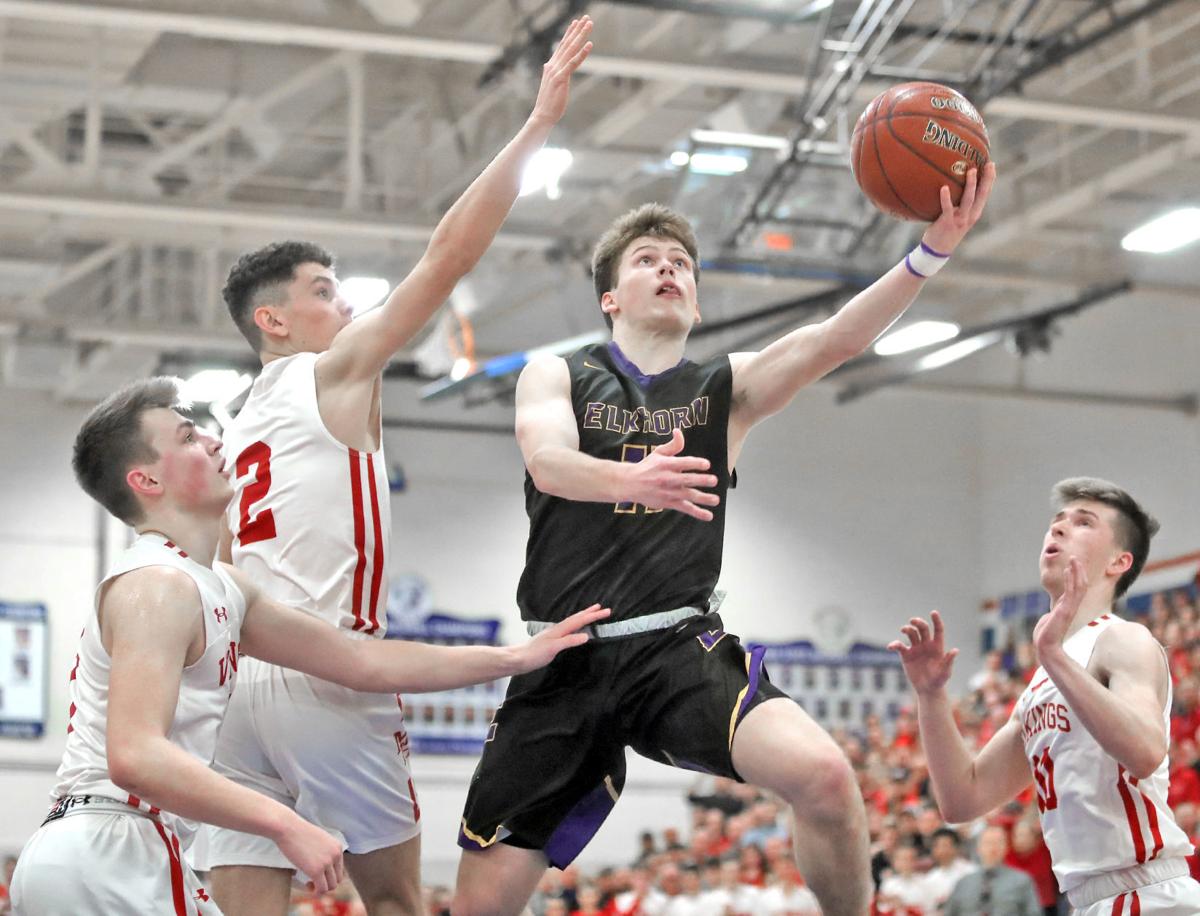 I set out to name my five favorite stories or storylines from area high school sports in 2019.

But as sports reporter John Barry and I bounced ideas off each other, I quickly realized five spots would be too few.

So, without further ado, here are 10 storylines from 2019 in area high school sports that are worth taking a look back at as the new year approaches.

10. Benton’s bash—Admittedly, this one creeps back up as we view Keaanu Benton’s year through rose-colored glasses.

The Janesville Craig graduate enjoyed a wildly successful first year with the Wisconsin football team, including being named the Badgers’ defensive rookie of the year.

And now he’ll play in the Rose Bowl on New Year’s Day.

But before he graduated, Benton wrapped up his standout wrestling career with a second straight state Division 1 runner-up finish, wrestling at 285 pounds at the Kohl Center.

9. Turner vs. Edgerton—The Division 3 sectional semifinal between these two Rock Valley boys basketball rivals produced the most fun atmosphere in the Craig gym that I can remember since Mistie Bass’ days at Parker against Craig’s Carrie Schieve and Jeannie Cullen in the early 2000s.

Turner’s Jordan Majeed poured in 30 points, and the Trojans won 57-53 for their first sectional victory ever.

They wound up losing to eventual state champ Martin Luther in the sectional finals.

8. Forsting wins golf title—Edgerton senior Joe Forsting shot a 5-under 67 on the first day of the state boys golf tournament at University Ridge in June, and it was enough to carry him to the Division 2 individual title.

He finished at even par in the event, which was shortened to 27 holes for D2 and D3 competition, good for a one-stroke victory.

She won the Division 2 state title in the 100 breaststroke for the second straight year in November. And she finished runner-up in the 200 individual medley and helped the Whippets medal in the 200 medley relay.

6. Parker volleyball’s run—Step by step, Janesville Parker’s volleyball team made us look into the past.

The Vikings were far from the tallest volleyball team, but they worked together very well and were bolstered by a strong senior class. They lost to Burlington in the sectional final.

4. Elks back at state soccer—Elkhorn’s boys soccer team reached the state tournament for the third time, falling 2-1 to Brookfield Central in a D2 semifinal match.

The Elks knocked off longtime nemesis Oregon, 2-0, in the sectional finals to get there.

3. State track success stories—There’s always a lot that comes out of state track.

2. Parker’s baseball upset—Some of the other games on this list might have come deeper into the tournament run, but as far as upsets go, this was the most memorable of the year.

Janesville Craig entered the postseason as a prohibitive favorite to return to the state tournament. Parker, under first-year coach Kerry Michaels, was a No. 9 seed that needed to win a game just to play its crosstown rival one more time.

The Cougars had won both regular-season meetings with the Vikings by 7-0 scores and hadn’t lost to Parker since June 10, 2014.

But Parker senior Casey Stone pitched a one-hitter, and the Vikings scored an unearned run to win 1-0.

At sectionals, Parker lost to Milton, which wound up one victory shy of its first trip to the state tournament.

1. Elkhorn makes it to Kohl Center—It had been several years since we had a local reason to make a trip to the state boys basketball tournament in Madison.

Elkhorn ended that drought by advancing to state for the first time in 32 years.

Elkhorn lost to Duke prospect Jalen Johnson and Glendale Nicolet in a state semifinal, but that was a mere footnote to the story after its wild ride through the tournament.

The Elks ended East Troy’s 21-game winning streak, beat top-seeded Westosha by one on Chance Larson’s late layup and got a scoop shot from Luke Umnus with one second left to beat Mount Horeb 60-58 in a raucous sectional final at Craig.