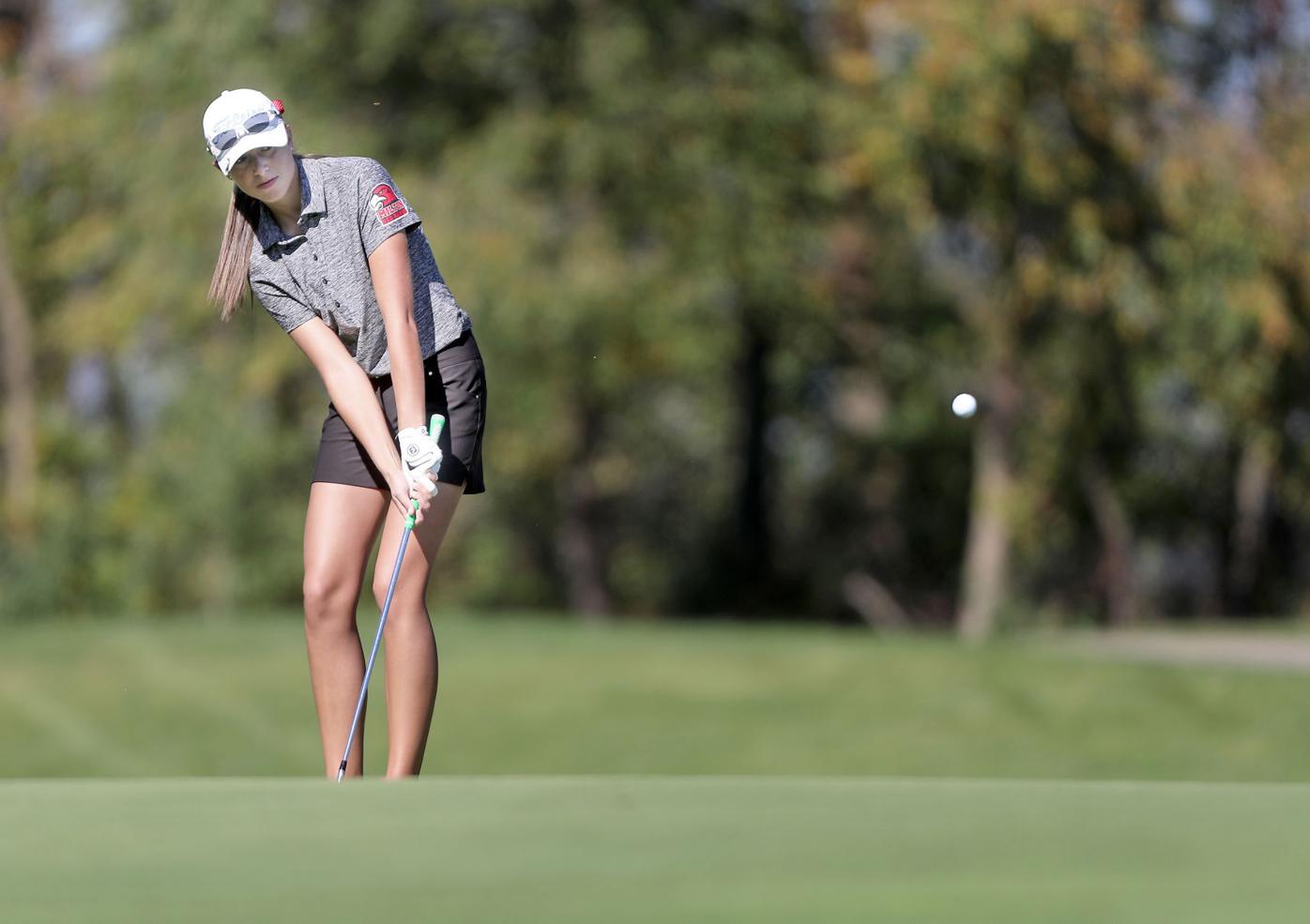 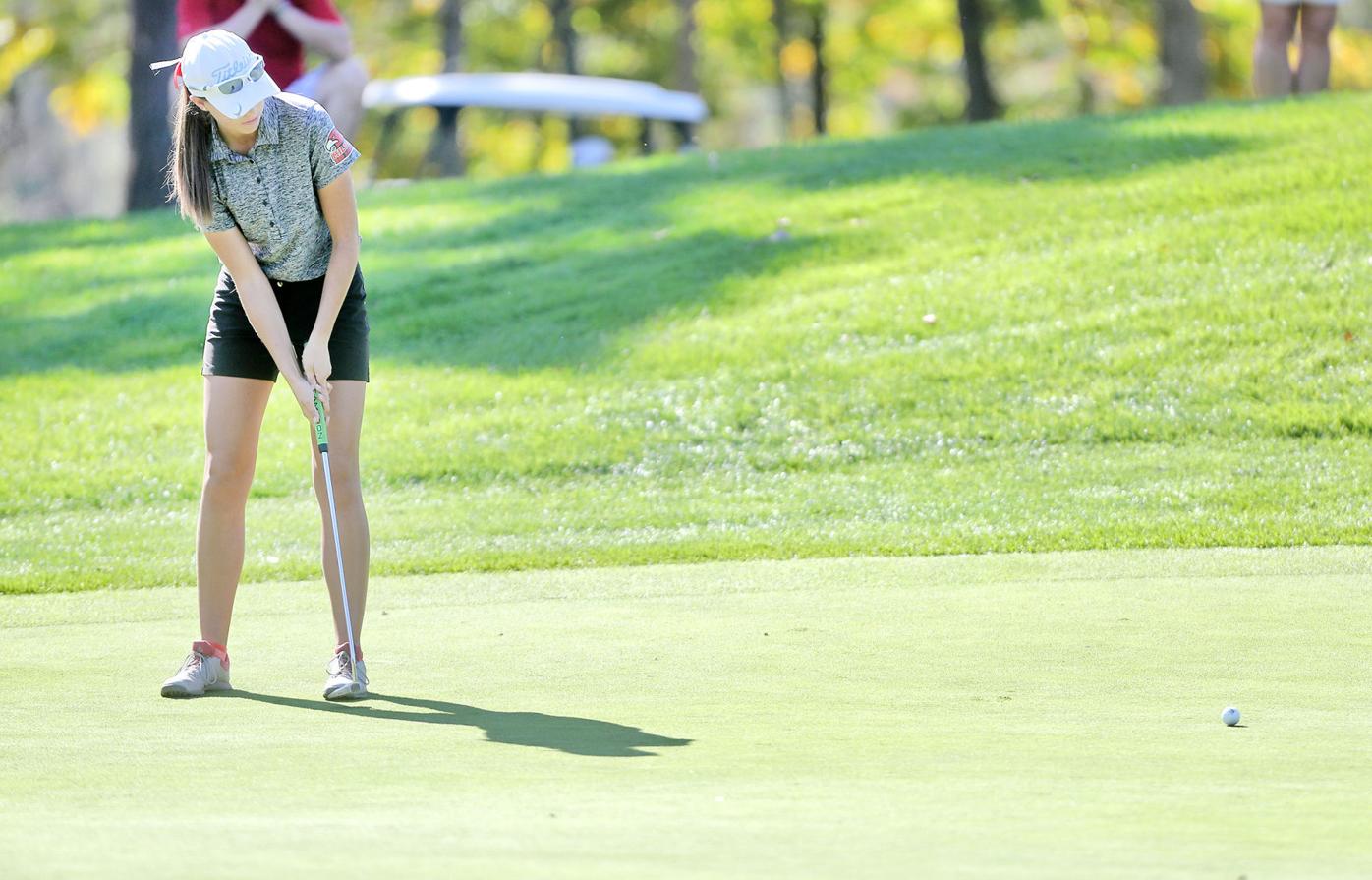 As a golf perfectionist, Mia Seeman may have nightmares about her 36th hole at the WIAA state tournament.

When she thinks back on the final two days of her high school career, however, the Milton High senior will remember it as a dream come true.

Seeman, who held a one-shot lead on the Division 1 field after the first day at University Ridge Golf Course on Monday, saw her advantage balloon to six strokes with just one hole remaining. That cushion came in handy, but she held on, shooting a two-day total of 1-over 145 to edge Kettle Moraine’s Abby Cavaiani by two strokes.

“I’m just really happy. It’s always been a goal of mine,” Seeman said after carding an 8 on the par-4 18th to shoot a 2-over 74 in the second round. “No matter what happened on the last hole, I’m still proud of myself, still happy.”

A four-time state qualifier headed to Division I South Dakota State, Seeman captured the state title by holding off Cavaiani, who shot a 60 in her conference tournament and topped Seeman by seven strokes at the Mukwonago Sectional one week earlier.

Arrowhead’s Emily Lauterbach was third, at 148, and Arrowhead won the team title by shooting 630 over two days. Milton, at state for the seventh time in the past eight years, matched its best-ever finish as a program, taking second at 657.

“If someone had told me coming in that our two-day total would be 657, I’d have taken it. I’m proud of all our players. Arrowhead just got out to a big lead, and they were the best team here,” Milton coach Kirk Wieland said.

“There’s not anyone that’s more deserving of this (a state title) than her,” Wieland added, discussing Seeman’s performance. “This is a perfect fitting end for her.”

Wieland did his best to help keep Seeman calm on the 36th hole. She went with an aggressive approach, taking driver off the tee, and her first shot sailed far right and into the woods. Seeman re-teed and hit her third shot with a hybrid, finding the middle of the fairway.

But the shot rolled to a stop in a divot, and that lie caused Seeman to come up short and right of the green, in a sand trap. Her fifth stroke did not get out of the bunker, but her sixth came to a rest about 10 feet from the cup and she two-putted to finish.

Seeman said she had no idea what score she needed on the final hold to hang on.

“I thought that we were close,” Seeman said. “I just wanted to have a steady round, and on the last hole take par or bogey. He (Kirk) just kept telling me to get it on the green and two putt it.”

Seeman suffered from no similar hiccups over the first 35 holes, as evidenced by her impressive six-shot lead up to that point. She was 1-under after the first round and moved her score to 3 under at the turn Tuesday thanks to four birdies in the first nine holes.

Seeman gave a shot back with a bogey at the par-4 14th, but she reached the green on the par-5 16th in two for the second straight day and made birdie. Attempting to play a bit more aggressively in recent weeks, Seeman played the 10 par fives in the tournament in 6-under.

“I was just trying to play them as par fours,” Seeman said.

“She was more aggressive than probably in weeks past,” Wieland said of Seeman’s approach. “She was also smart enough to understand she’s done, this is it, and it’s not time to hold anything back.

“From Hole One to Hole 36, she was the best player. The last hole was a little bit of a glitch—a bad tee shot, a couple terrible breaks in the fairway divot and bunker—but it’s OK. We can have fun with this and give her a hard time.”

The Milton program finished as state runner-up for the third time in school history. The Red Hawks also took second in 2010 and 2011.

Junior Taylor Hakala shot a 7-over 79 on the second day to finish 15th at 160. Sophomore Claudia Seeman, Mia’s sister, was 29th at 172, and senior Holly Gunnink was 40th at 180. Freshman Callie Hakala shot 206 in her first trip to University Ridge.

“It makes us look back on all the practices we’ve had through the season. We’ve put in the work,” Taylor Hakala said.

Lake Geneva Badger sophomore Holly Murphy was the first player in school history to qualify for the girls state golf meet, and she made the most of it with a top-10 finish. Murphy shot 4-over 76 on Tuesday to finish tied for ninth at 155 overall.

Janesville Parker’s Sophia Dooman capped her junior season with her first trip to state. She improved on her first-round score by four strokes, shooting 85 to finish tied for 42nd at 174.