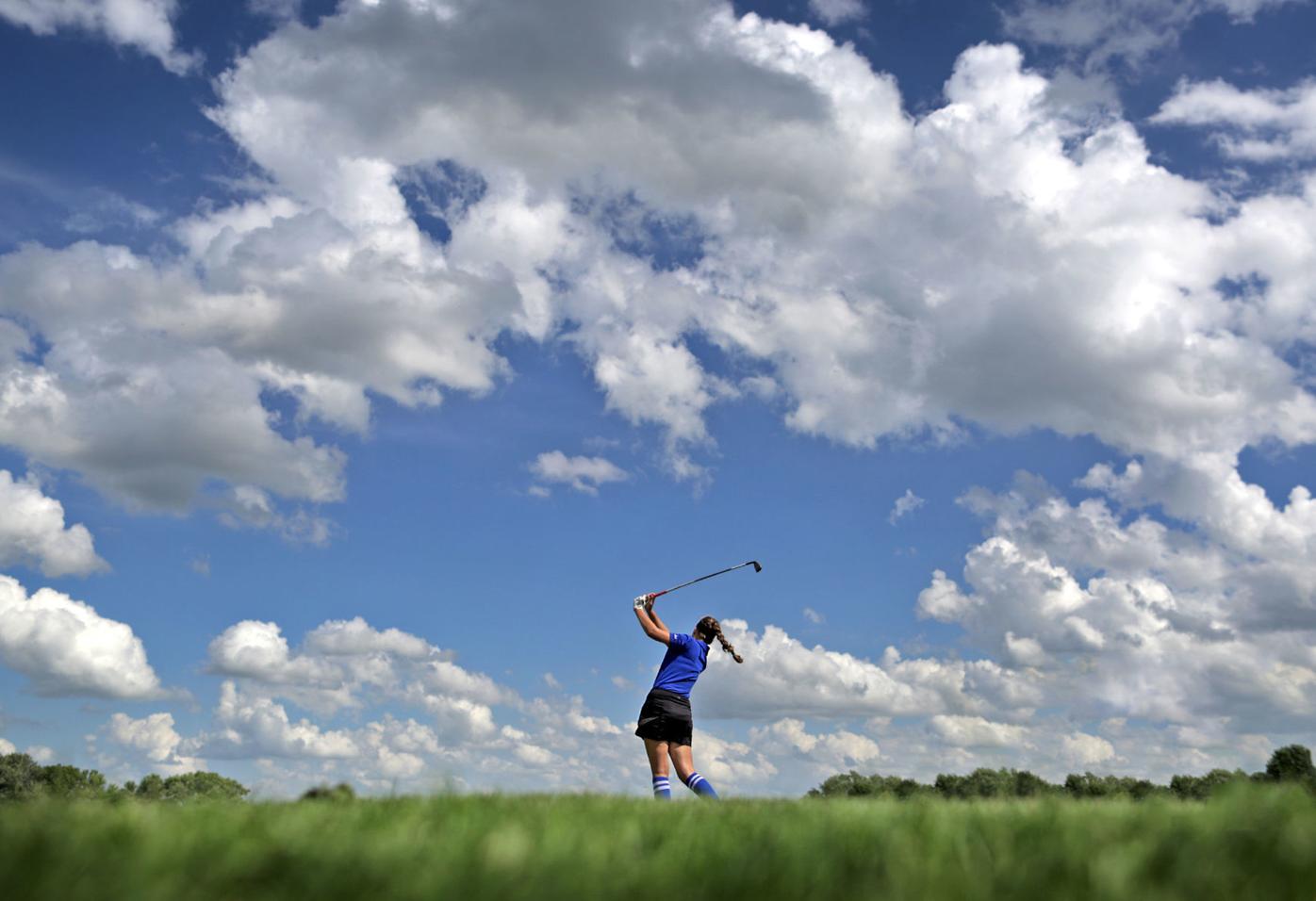 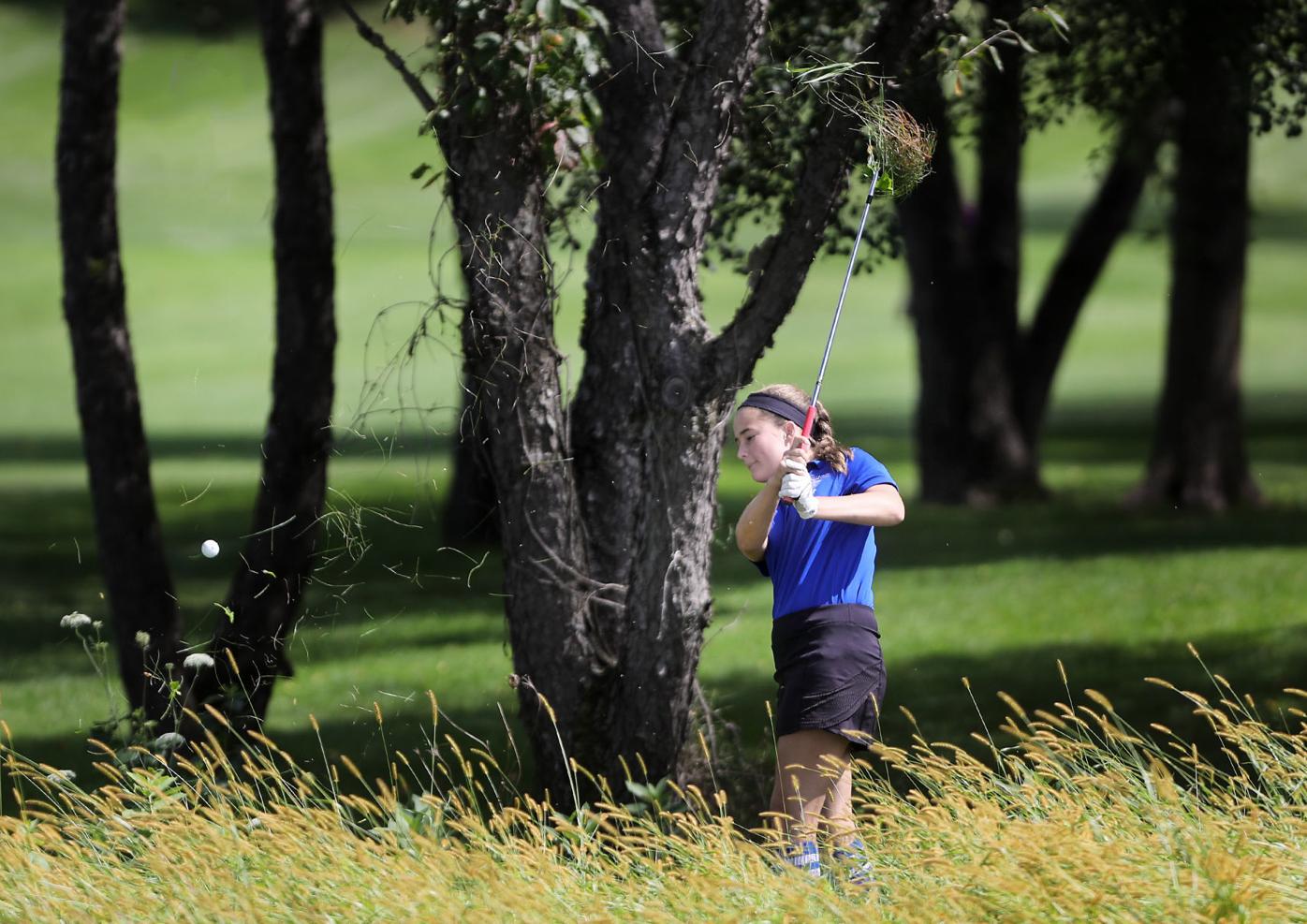 Janesville Craig's Kallie Lux hits her ball out of the tall grass on the first hole during their Big Eight Conference golf meet at Glen Erin Golf Course in Janesville on Tuesday, Sept. 4. 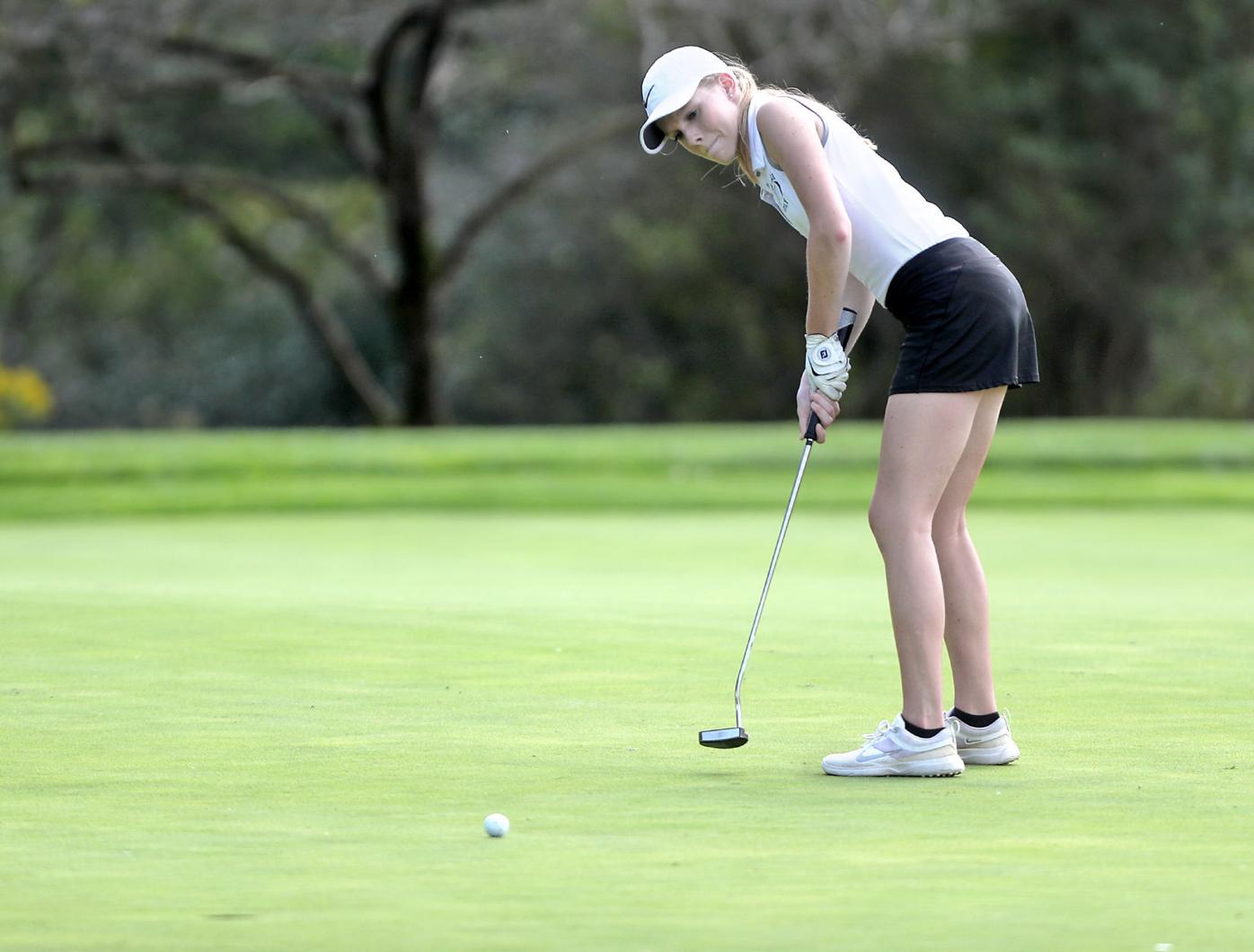 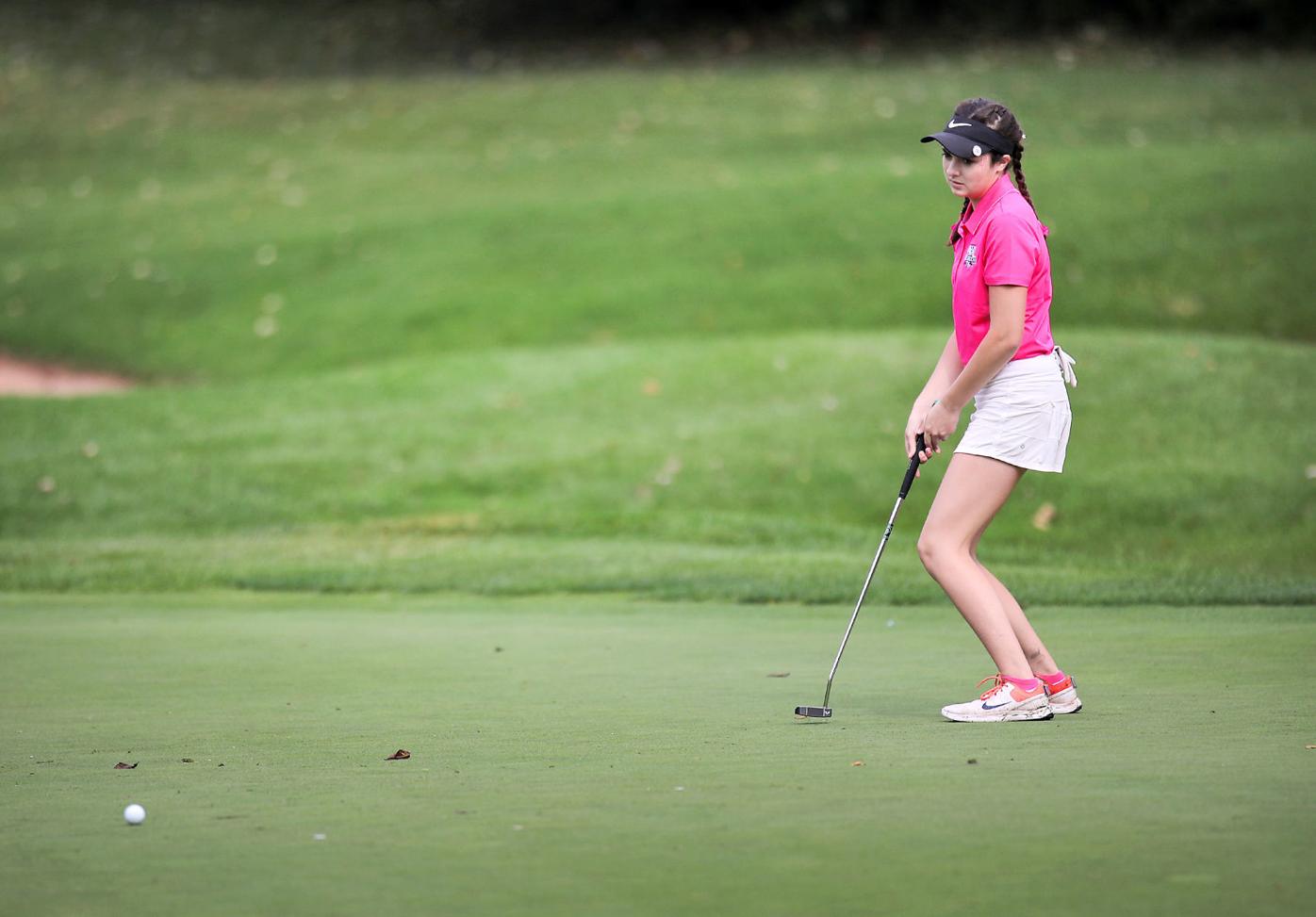 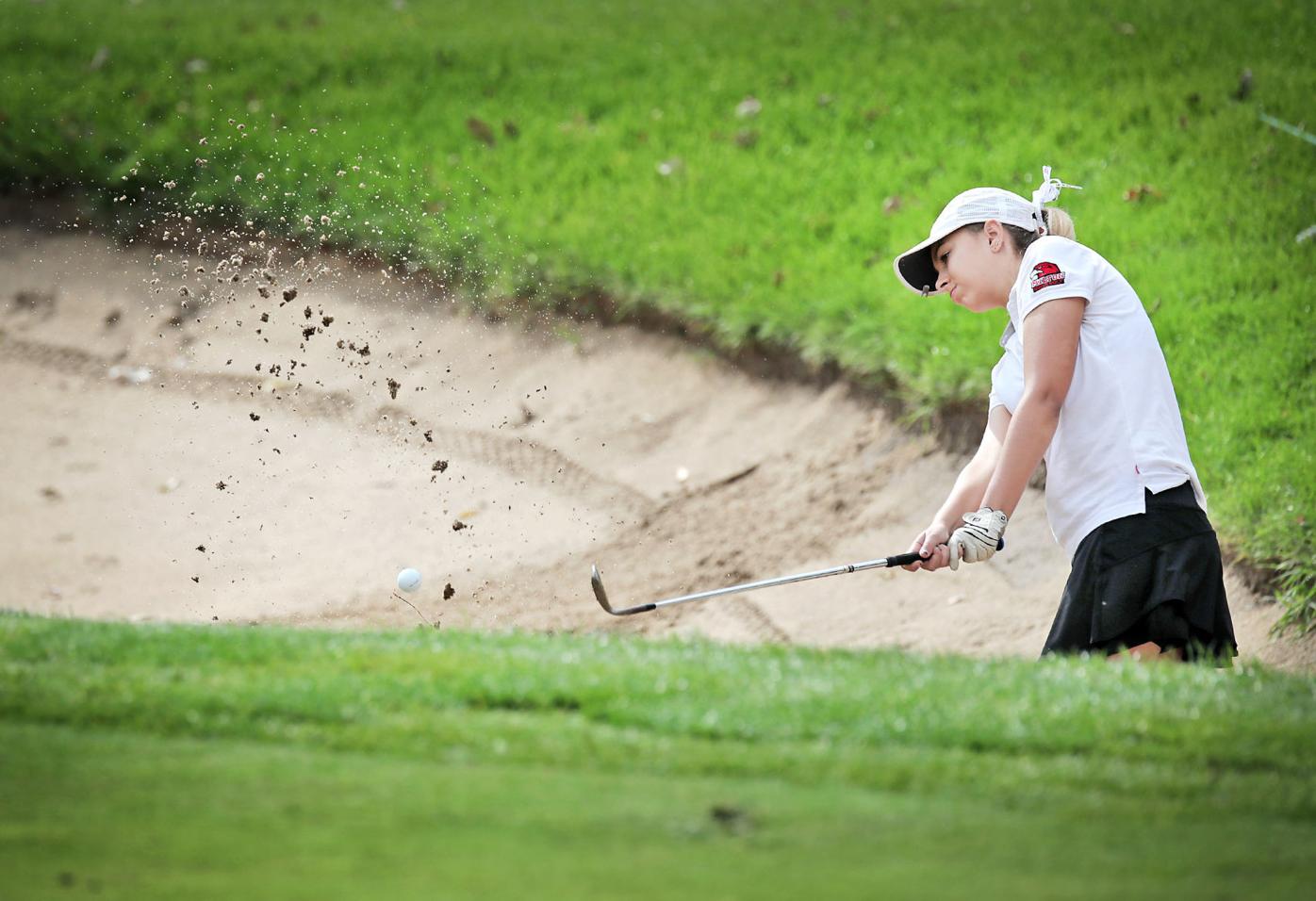 Milton's Claudia Seeman clears her ball out of a bunker on the 14th hole during the WIAA Division 1 and Division 2 state girls golf tournaments at University Ridge Golf Course in Verona on Monday, Oct. 8. 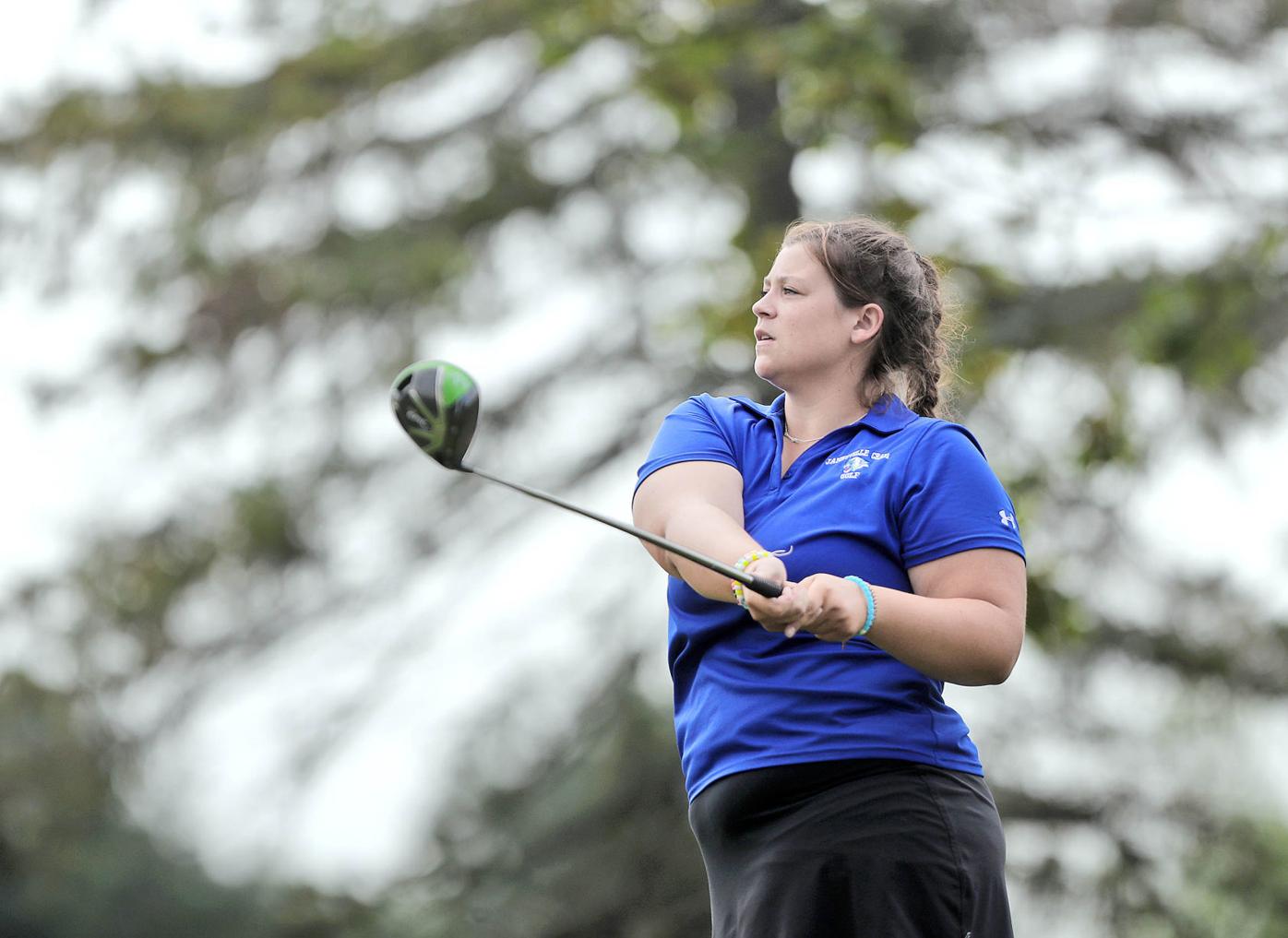 Janesville Craig's Sara Nerad tees off of the fifth hole during a scrambles tournament at Evergreen Golf Club in Elkhorn on Wednesday, Aug. 15.

Janesville Craig's Kallie Lux hits her ball out of the tall grass on the first hole during their Big Eight Conference golf meet at Glen Erin Golf Course in Janesville on Tuesday, Sept. 4.

Milton's Claudia Seeman clears her ball out of a bunker on the 14th hole during the WIAA Division 1 and Division 2 state girls golf tournaments at University Ridge Golf Course in Verona on Monday, Oct. 8.

Janesville Craig's Sara Nerad tees off of the fifth hole during a scrambles tournament at Evergreen Golf Club in Elkhorn on Wednesday, Aug. 15.

High school girls golfers across the state hit their first official bucket of balls of the season Monday.

Many teams will have their first rounds of the season in by this time next week.

It might be the first week, but some local coaches are doing their best to make sure a postseason mentality is already being cultivated.

Janesville Craig coach Alex Schaar will have 80 percent of his lineup back this year, but the area’s Division 1 regional gets much tougher. Accordingly, Schaar wants his players to lock in early and often.

“Every meet that we play is going to matter, and we can’t soften up this year. Last year we made it pretty far into the postseason, but we’re going to have to fight every step of the way this year,” Schaar said. “Even invites that don’t count for our conference record, we need to be working on our mindset. We need to set that mentality right away.”

Parker head coach John Zimmerman, who returns to the helm for his 17th season after eight years away from the position, said the regional field has a familiar feel.

“In 2008, we won the Big Eight regular season and tournament and were ranked No. 4 in the state. But our sectional had four of the top 10 teams, and only two could come out of it,” Zimmerman said. “So that’s pretty much how it was from 2004-12.

“They changed it for a while, but now they went back.”

Regional tournaments are the first week of October, and state is just over two months away.

More than once, Schaar has been asked how Kallie Lux is looking heading into her senior season.

Schaar is then forced to give a gentle reminder that while Lux has been the Cougars’ top player the past two seasons, she is only a junior.

Lux qualified for her first trip to the state tournament last year—finishing tied for 28th—and headlines a Craig team that returns all four of its counting players from a fifth-place finish at sectionals a year ago.

“We have the core of our team back … so it’ll just be trying to fill the fifth spot that will be interesting,” Schaar said. “Kallie has played a lot of junior PGA golf this summer and played up at Whistling Straits in a college showcase recently.

“I’m most excited to see Kallie have the mental growth and maturity going into her junior year.”

“Sara is looking to play golf in college and has had several schools show interest,” Schaar said. “She’s playing for her future a little bit, but she’s some competitive, so that’ll be a nice edge.”

Schaar said Dammen may have had the busiest summer on the junior circuit.

He also said he’ll have several incoming freshmen, including Emma Udelhofen, who could vie for the fifth spot.

Janesville Parker has three returning players and three players with zero varsity experience on its roster this spring.

Seniors Bria McDade, Baleigh Pajerski and Amelia Clarquist were part of a Vikings team that missed out on potentially qualifying for state by just three strokes at sectionals a year ago.

Zimmerman, the program’s returning head coach after eight years away, will ask those three seniors for their leadership as the rest of the program consists of a three-player freshman class.

“Bria is our captain and has the most varsity experience, so she’ll lead the charge,” Zimmerman said. “Mia also got some great varsity experience under Coach (Mary) Ross, who did a great job with these seniors. And Baleigh played both varsity and JV at times last year.

“All three of them worked on their game this summer and took some good steps forward.”

The freshmen vying for the other two varsity spots will be Sarah Zimmerman, Madelyn Olson and Bailey Carlson.

John Zimmerman stepped away from coaching girls golf after 16 seasons to focus on raising his family, which includes his daughter, Sarah, now on the team.

He said he would like this Vikings team to vie for a top-three spot in the Big Eight Conference.

“This is a good group of girls to work with, so I’m excited to be back,” John Zimmerman said.

Behind then-senior Taylor Hakala and then-junior Claudia Seeman, Milton topped Badger by 20 strokes to win the Badger Sectional a year ago, with both teams qualifying for state.

Hakala was ninth in the D1 individual field for the area’s top finish. With her graduation, the Red Hawks will need to find some depth outside Seeman—who was 25th at state—if they are to qualify for state for the sixth straight year and ninth time in the last decade.

Juniors Reagan Moisson and Callie Hakala each showed at times during their sophomore campaigns the ability to go low, but consistency was sometimes an issue. Senior Desi Dorcey also got varsity experience. Another would-be junior who played varsity, Grace Weis, moved out of state.

The Red Hawks could be bolstered a bit right away by freshman Hannah Dunk.

Badger finds itself in a similar position as Milton in terms of seeking consistent scoring throughout the lineup.

Senior Holly Murphy cruised to the sectional title last year and finished 10th at the state tournament, and with three other returning golfers the hope is for the Badgers to take another step forward.

In Division 2, Edgerton won a Rock Valley Conference title a year ago and lost in a playoff at sectionals with a state berth on the line. Mackenzie Suhr and Maddie Perkins, who qualified for state individually, were seniors. First-year head coach Mike Schmidt will need returners Alexis Deavers, Ale Bittner and Tiana Johnson to carry the load.