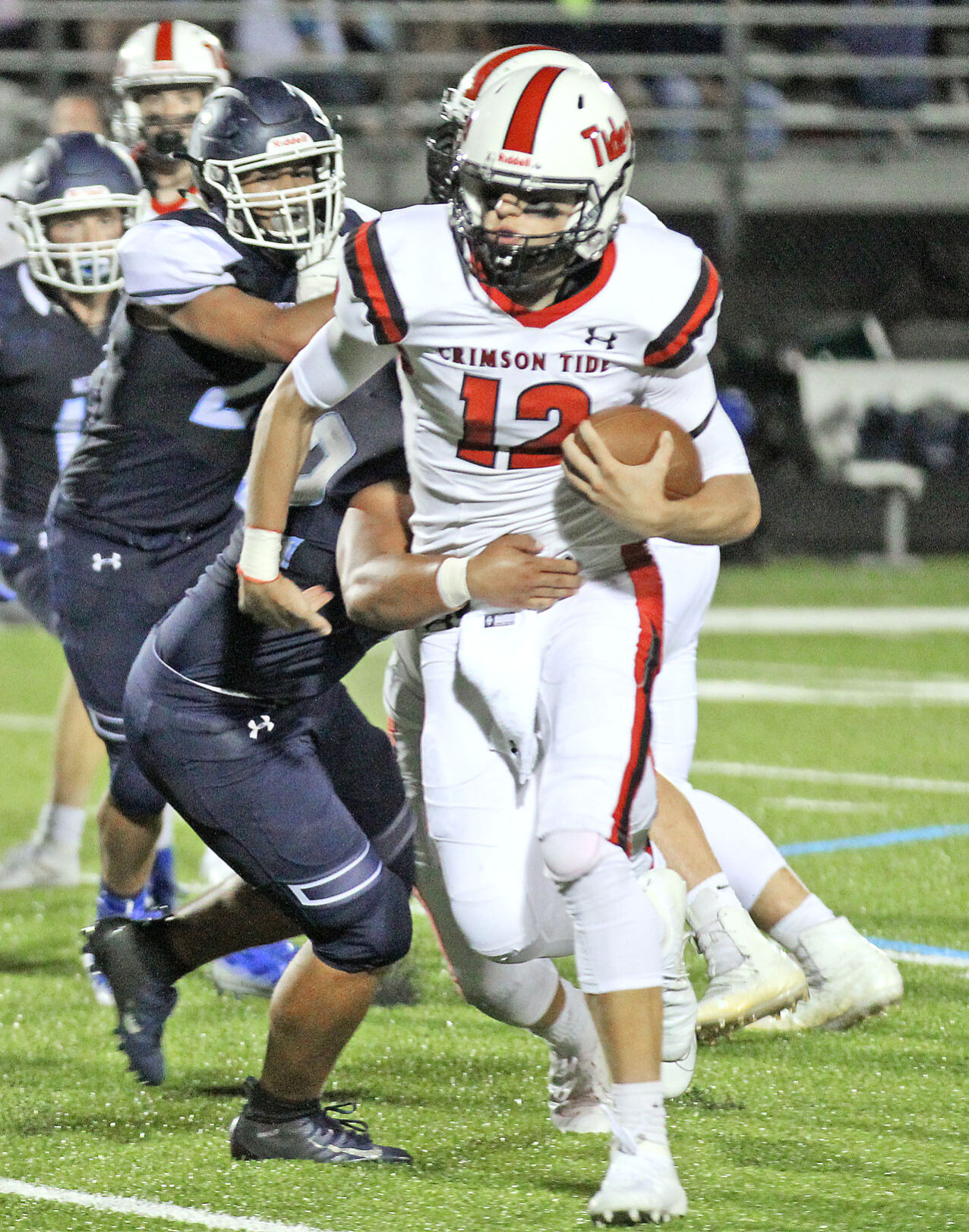 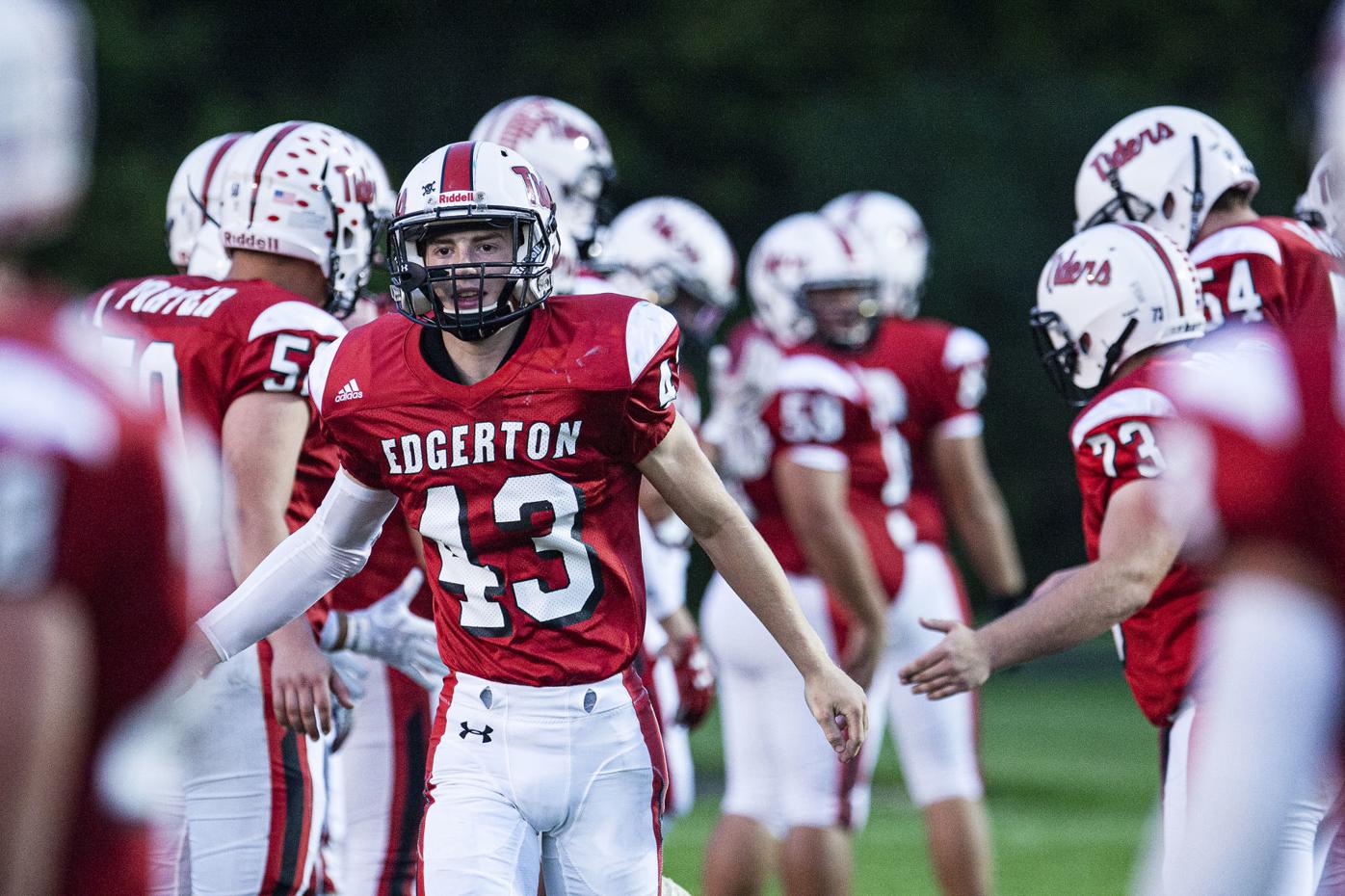 Edgerton's Ethan Krause (43) is announced to the crowd during pregame introductions ahead of a Rock Valley Conference game against Jefferson on Friday, Sept. 20, 2019, at Edgerton High School.

Edgerton's Ethan Krause (43) is announced to the crowd during pregame introductions ahead of a Rock Valley Conference game against Jefferson on Friday, Sept. 20, 2019, at Edgerton High School.

Led by the return of one of the area’s top quarterbacks, Edgerton is poised for another successful football season.

The Crimson Tide finished 9-2 in 2019 and shared the Rock Valley Conference title.

Drew Hanson was a big reason why. The senior quarterback accounted for over 2,000 yards of total offense in earning first-team all-conference honors.

Hanson’s return, along with a bevy of talented skill position players, has first-year coach Russ Lietz eager to get the season started.

“We’ve got a lot of seniors that were the unsung heroes off that 2019 team,” Lietz said. “And after what we went through in the fall, they’re all just excited to be able to play.

“We’ve got our field general in Drew, and he’s going to put people in position to make plays. As good as he was last season, I think he’s going to show what he’s truly capable of this season.”

Edgerton lost all five starting offensive linemen to graduation, so Lietz knows he needs got to open up the playbook and allow Hanson more opportunities to spread the field. Seniors Clayton Jenny and Konner Knauf are two quick and athletic targets for Hanson, along with the size of 6-foot-2 Luke Norland and 6-4 Jacob Holloway.

Ethan Krause returns at tailback after rushing for 584 yards in 2019 and earning all-conference honors. Senior Sawyer Strouse is also expected to get carries.

“I think our passing game is going to open up our running game,” Lietz said. “And by throwing the ball a little bit more, I’m hoping that eases up on an inexperienced and undersized, but physical, offensive line.

“We’ve got some really good athletes with good speed at the skill positions, so teams aren’t going to be able to concentrate on just one or two of them.”

Along with Hanson, the Crimson Tide’s most lethal weapon on offense may be placekicker Ismael Diaz. The senior has unlimited range, according to Lietz, and has made a 56-yard field goal in practice.

Charlie Hayek is penciled in as a starter on the offensive line, with Lietz hoping to fill the other four spots after the team’s scrimmage with East Troy.

Defensively, the Crimson Tide will run out of a 4-4 base. Krause leads the list of returnees after earning all-conference first-team honors at linebacker in 2019.

Hayek and senior Jacob Holloway occupy the defensive end spots, while Jenny, Knauf and junior Shane Kisting give the Tide an athletic secondary.

“We’re not going to intimidate anybody getting off the bus, but we’ve kids that are going to be very physical on both sides of the ball and really good team speed,” Lietz said.

“The goal is to make the most out of the fact that we’re able to play and have a season. Everybody’s excited.”