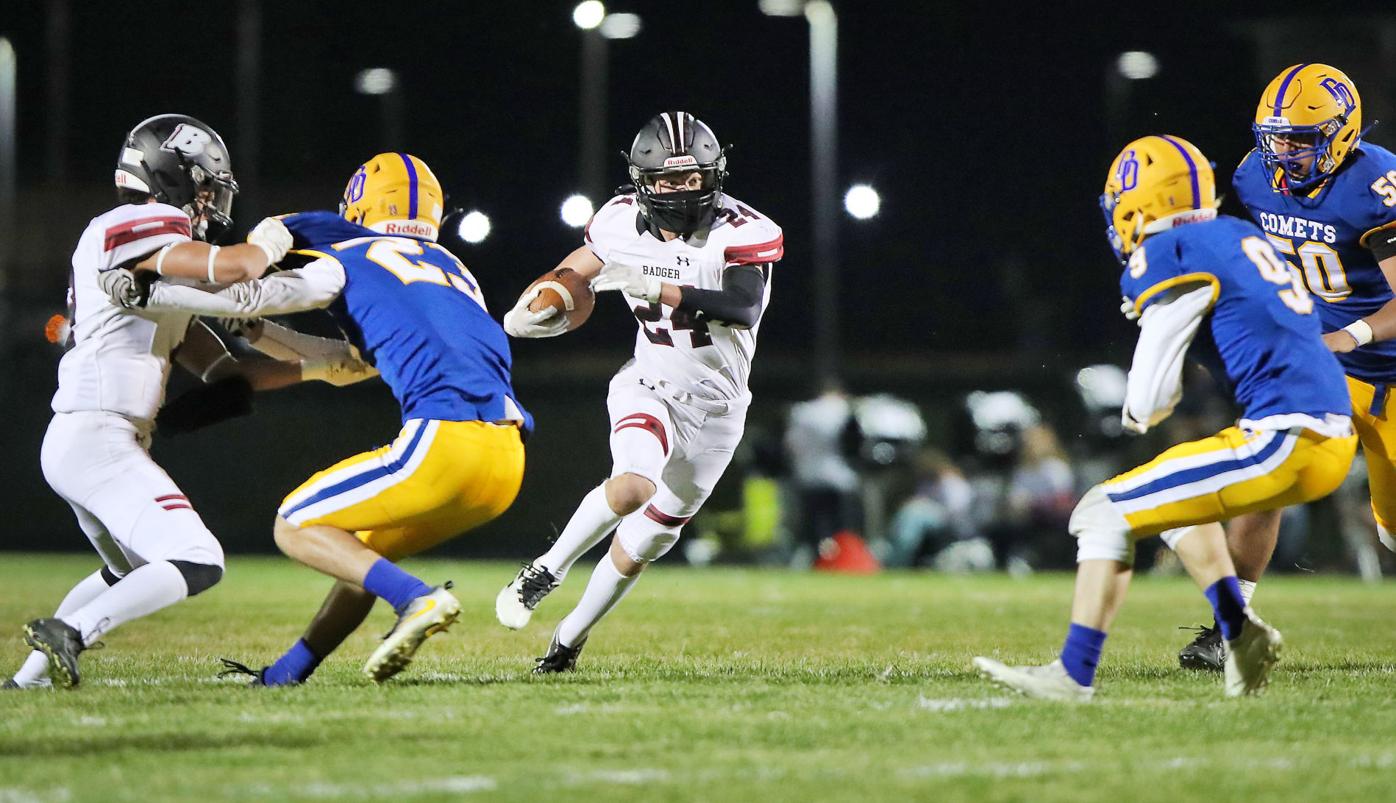 The opening closes quickly on Lake Geneva Badger’s Vincent Faul during the first half of their conference game away against Delavan on Friday, Oct. 9. 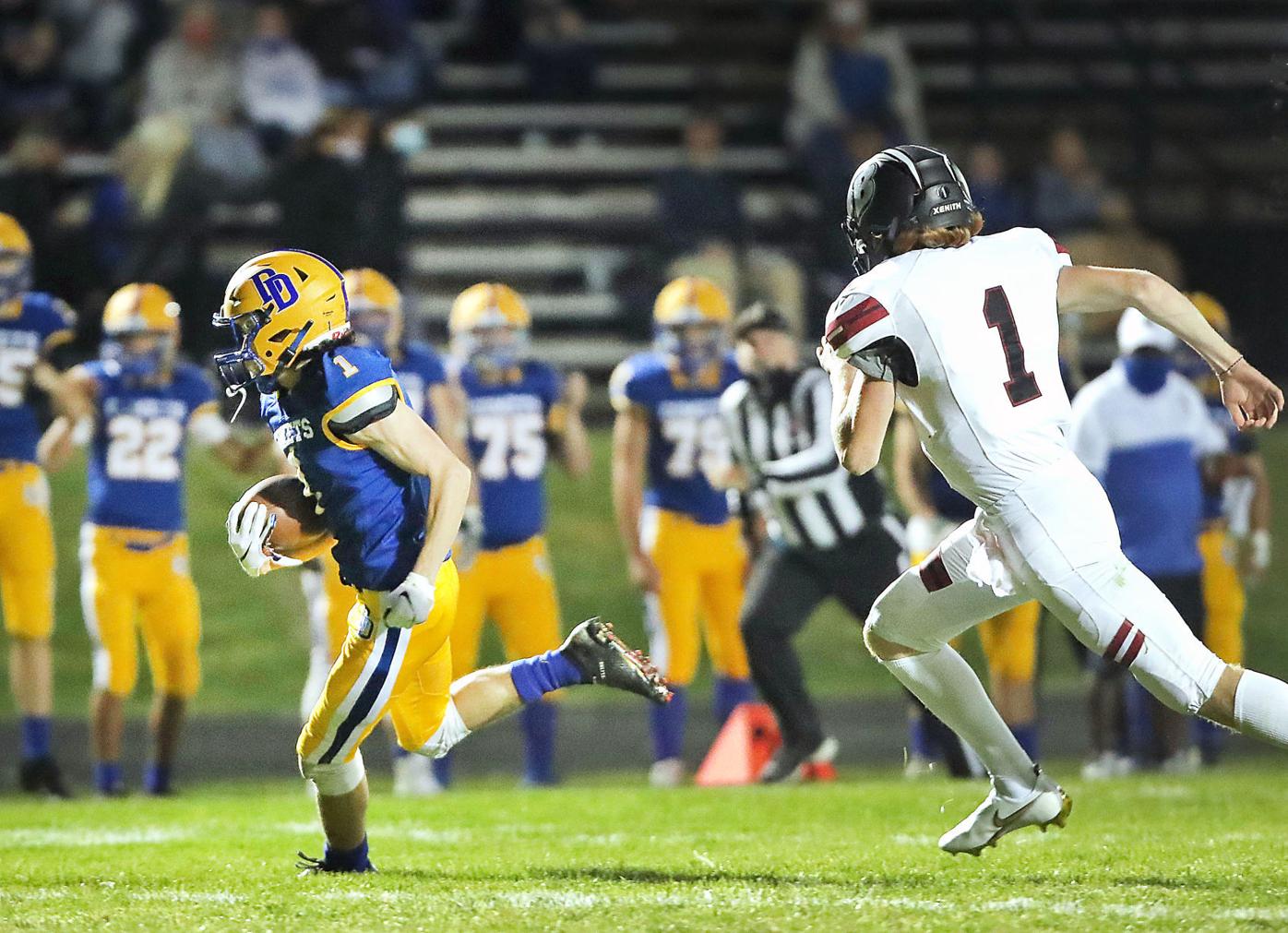 Delavan-Darien’s Rolando Ceros scores on a 21-yard touchdown pass during the first half of their conference game at home against Lake Geneva Badger on Friday, Oct. 9.

The opening closes quickly on Lake Geneva Badger’s Vincent Faul during the first half of their conference game away against Delavan on Friday, Oct. 9.

Delavan-Darien’s Rolando Ceros scores on a 21-yard touchdown pass during the first half of their conference game at home against Lake Geneva Badger on Friday, Oct. 9.

The Southern Lakes Conference has found a way to overcome the current COVID-19 pandemic.

The SLC is at the halfway point of the football season, and despite several games being postponed due to coronavirus circumstances, no conference games have had to be canceled yet.

Elkhorn Area, Delavan-Darien and Westosha Central have all played their four scheduled games, although the Elks are the only team to play all Friday night games.

Wilmot had to postpone its first two conference games because of COVID-19 concerns but was able to play two games last week on Tuesday and Saturday.

Burlington, Union Grove, Waterford and Lake Geneva Badger have played three games each but plan to make up their postponed games.

Wilmot has only played twice but also expects to complete its seven-game conference schedule.

So what has been the key to staying afloat during these difficult times?

“You have to be very cognizant of what’s going on around you, and our kids have been,” Ghilani said. “We’ve probably even been a little too hard on them safety-wise, but that’s why we probably have stayed healthy and able to play every week. They know that means masks on every time they come into the building (school). No questions asked.

“With school going back full time, they know they’re going to be around other students, teachers and staff members. Everyone is in the same boat.

“You take the precautions necessary because it all could be taken away just like that.”

Burlington and Union Grove sit tied for first in the Lakes at 3-0, while Waterford is a game behind at 2-1. Elkhorn lost to all three of those teams, including a 20-6 loss to Burlington last Friday.

“I still think Burlington is the class of the Lakes,” Ghilani said. “We did not compete very well in losing to Union Grove two weeks ago, and nobody seemed to be on the same page. But we bounced back in a big way last Friday against Burlington.

“We were one score down at half and had a couple of chances to make big plays in the second half. It was a slugfest, and I was really proud of the way our team competed.”

Burlington is getting it done defensively. The Demons have allowed only 23 points in three games.

Offensively, quarterback Peyton O’Laughlin and Zach Wallace are the catalysts. Wallace has rushed for 545 yards and five touchdowns, while O’Laughlin has thrown for 579 yards and six TDs.

Union Grove is the surprise team in the Lakes after finishing 3-4 in the conference last season. The Broncos, who host Burlington next Friday, are averaging a robust 38.3 points a game.

Defending Lakes co-champion Waterford has a chance to knock Union Grove out of the top spot when its hosts the Broncos tomorrow night.

The teams have split their last four meetings, with the Elks winning the last two, including a hard-fought 22-21 win last season.

Ghilani knows it’s a big game for both teams.

“We know that when we look at film on Delavan that we’re going to get their best game,” Ghilani said. “It’s a rivalry game and the most important game on the schedule, and one that you circle right away when the schedule comes out.

“Delavan-Darien is probably the biggest team we’ll face, and that causes us some issues. We’ll have to take advantage of our speed and stay within the game. It’s probably going to get chippy because of the rivalry, but you have to stay focused on the task at hand.”

Delavan-Darien hung tough with Wilmot last Saturday before fading in the second half in a 30-19 loss. The Comets led 12-6 at halftime.