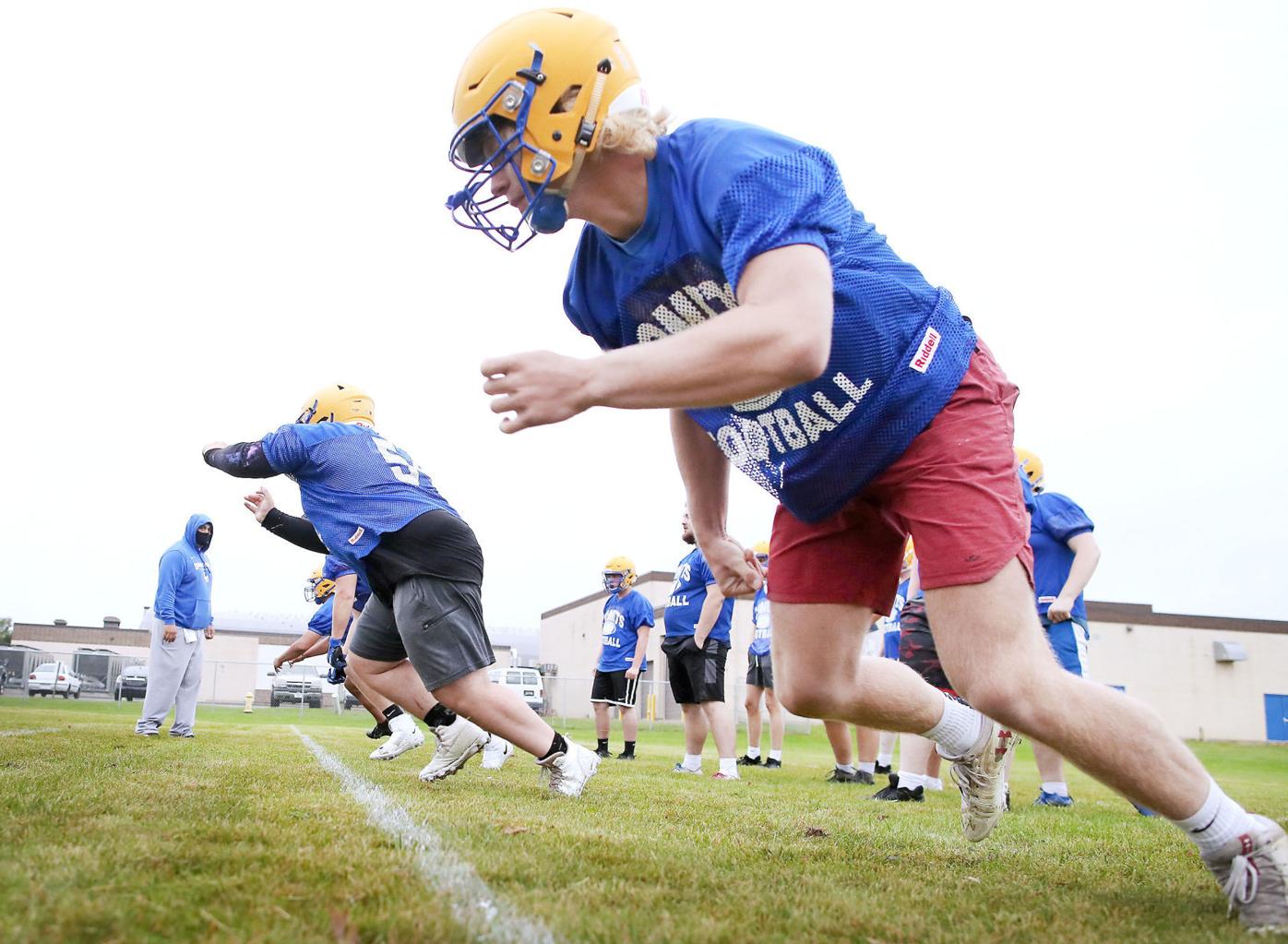 Members of Delavan-Darien’s defensive line run through a drill on Tuesday during their first practice of the season on Tuesday, Sept. 8. 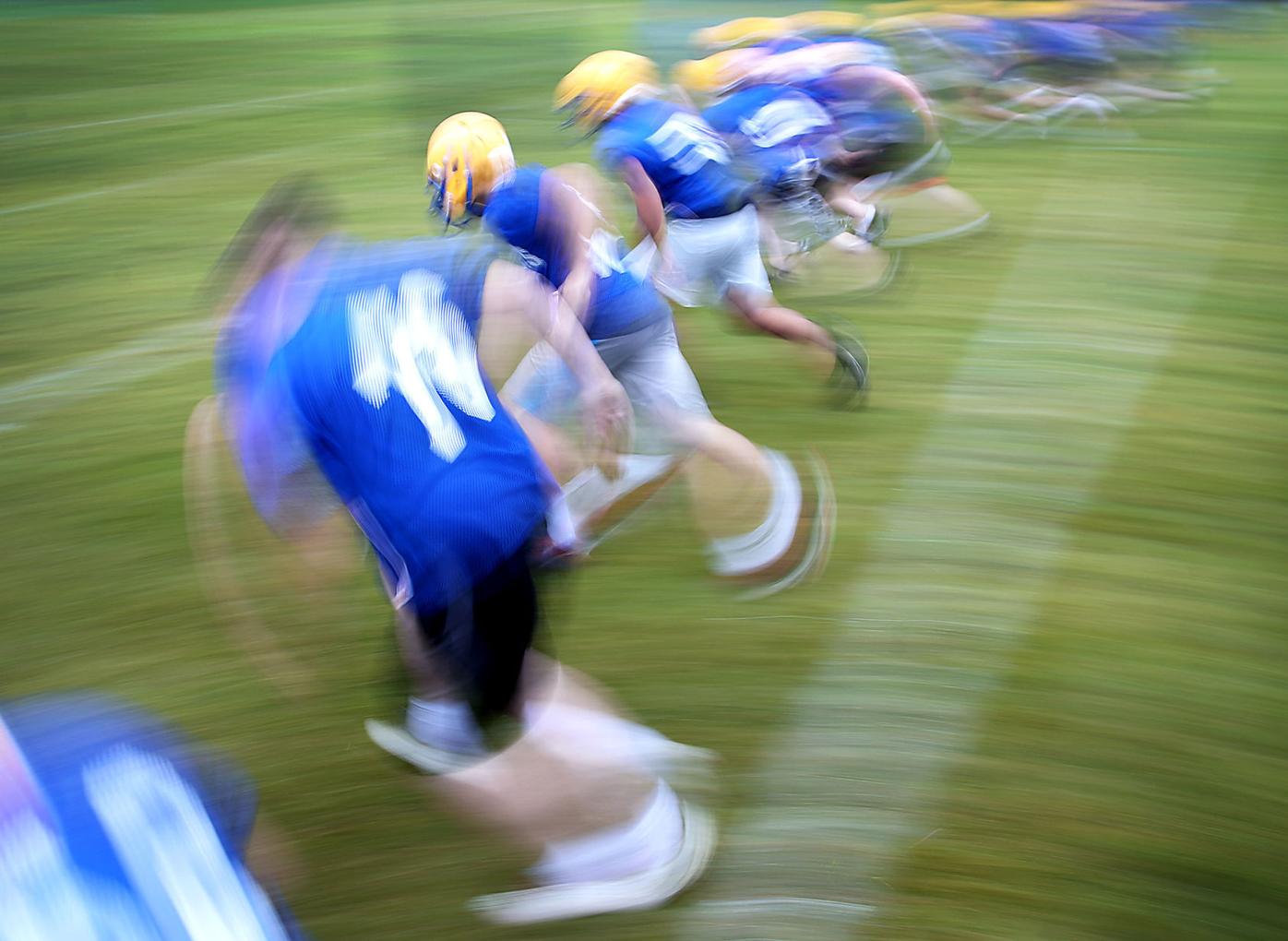 Football players with Delavan-Darien’s varsity squad run sprints at the end of their first practice of the season on Tuesday, Sept. 8.

Members of Delavan-Darien’s defensive line run through a drill on Tuesday during their first practice of the season on Tuesday, Sept. 8.

Football players with Delavan-Darien’s varsity squad run sprints at the end of their first practice of the season on Tuesday, Sept. 8.

Life in the Southern Lakes Conference continues to be a struggle for Delavan-Darien’s football program.

A huge disparity in enrollment numbers leaves the Comets at a disadvantage.

Delavan-Darien sits with an enrollment of 701—by far the smallest in the Southern Lakes. Lake Geneva Badger boasts the highest enrollment in the conference with 1,335 students, while five of the other six schools also have enrollments over 1,000. Wilmot is the second-smallest school in the Lakes, with 981 students.

Badger has 634 more students than Delavan-Darien. In what universe is that fair?

With no signs of a sudden surge in enrollment forthcoming, Delavan-Darien appealed with the WIAA realignment task force last fall to move the school from the Southern Lakes to the Rock Valley.

Schools in that conference have enrollment numbers that are more in line with Delavan-Darien.

How difficult has it been for Delavan-Darien to remain competitive in the Southern Lakes?

The Comets have won two conference games in the last three seasons and started the 2020 season with a 43-8 loss at Burlington.

“It is what it is,” Delavan-Darien coach Hank Johnson said of the enormous enrollment disparity his team faces each and every week. “We’ve got 80 kids out this year, which is good for us, but the problem is that for so many of them, this is their first year out for football.

“And when you don’t have your two-a-days that first week of practice and you don’t have a scrimmage like we did this season, it makes it even tougher for those kids that have never played before.”

Johnson said it’s not all doom and gloom for the Comets. He’s been impressed with the senior leadership he’s gotten, and he said more than anything he’s got a great group of kids to work with.

“The big thing is that we obviously don’t have the depth that the other schools do,” Johnson said. “I’ve already got kids that have never played before that are up to second team on our depth chart because of a couple injuries.

“Me and the coaching staff have had to do a lot of teaching, which we enjoy, because we do have so many new kids. That means teaching not only our starters, but those kids that have to learn what it’s like and what is expected on the scout team or second team.”

Johnson said seniors Josh Mick and Luke Freitag have been instrumental in providing much needed leadership to his young team. Mick threw for 155 yards in last week’s lost to Burlington, including a 22-yard touchdown pass to Freitag.

Johnson said dealing with COVID-19 guidelines has also made things more difficult for his young and inexperienced team.

“Like I said, we didn’t get those two-a-days early on, and not having a scrimmage really made for a quick turnaround from practice to the first game,” Johnson said.

“We don’t get to share a locker room, which is very unusual, and last week we took two buses to our game in Burlington with only one player per seat.”

Delavan-Darien will get better because Johnson is an excellent motivator and coach, but the Comets are simply undersized—both on and off the field.

Westosha looked nothing like the team that won only two games last season in beating Badger last Friday. The Falcons rode the arm and legs of junior quarterback Michael Mulhollon to victory. He rushed for 147 yards and two touchdowns and threw for 153 and another score. Junior running back Jakob Simmons had 136 yards rushing and three TDs.

The Falcons trailed 19-7 but put up 34 points in the second half.

Elkhorn found itself in a shootout with Waterford last Friday. The Elks generated 345 yards of offense but came up short in a 42-41 loss.