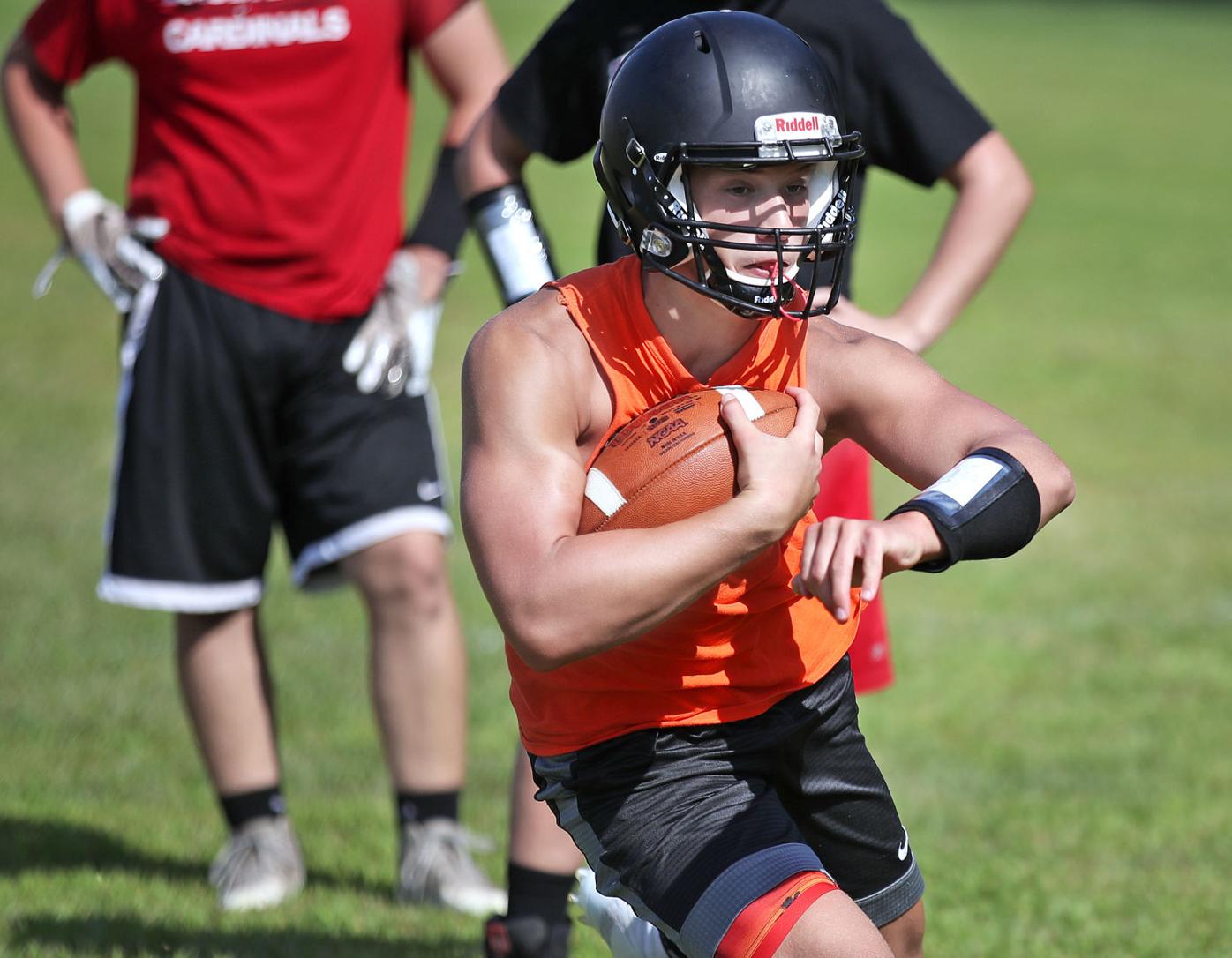 Brodhead/Juda's Gage Boegli runs with the ball during a drill at their practice on Wednesday, Aug. 7, 2019. 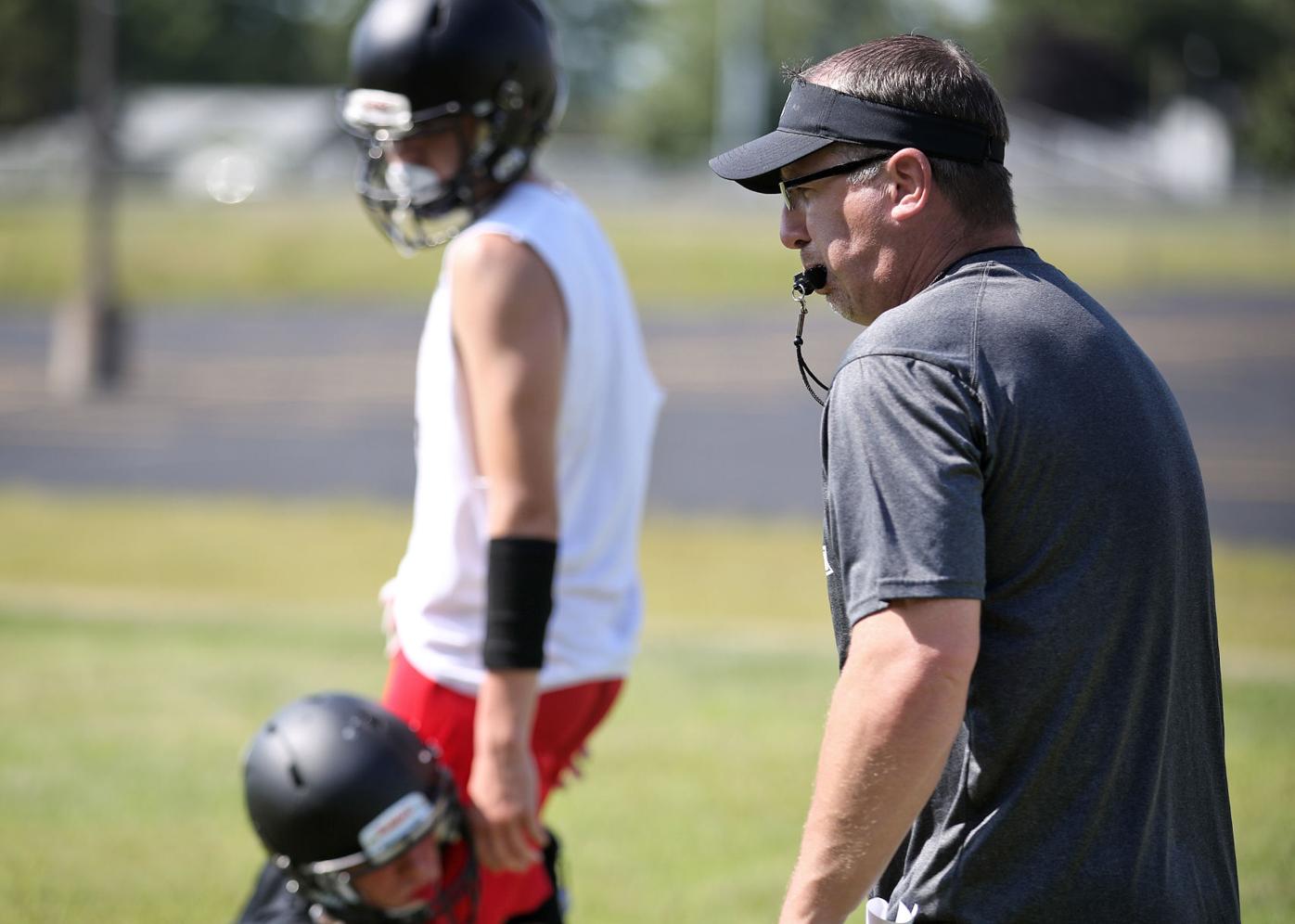 Brodhead/Juda head coach Jim Matthys blows the whistle during a tackling drill at their practice on Wednesday, Aug. 7, 2019.

Brodhead/Juda's Gage Boegli runs with the ball during a drill at their practice on Wednesday, Aug. 7, 2019.

Brodhead/Juda head coach Jim Matthys blows the whistle during a tackling drill at their practice on Wednesday, Aug. 7, 2019.

Can Brodhead/Juda football get back to its winning ways in the alternate fall season?

That’s goal No. 1 for coach Jim Matthys and the Cardinals.

Brodhead/Juda has had three straight losing seasons after a state-record 26 straight postseason appearances. The Cardinals did make the WIAA postseason in 2019, but the team finished 4-6 overall, including 4-5 in the Rock Valley Conference.

The Cardinals were supposed to move to the SWC this past fall for football, but the season was postponed due to COVID-19. The team is now scheduled to play a six-game nonconference schedule beginning Friday night with a game against Deerfield on Walworth Big Foot’s turf field.

“The spring season will be a challenge with only six games,” Matthys said. “We will need to have a fast start and progress quickly.

“Our goal this spring season is to get the program back to its winning ways. We have great leadership and players who have continued to persevere, working hard together in the weight room. Leadership has been a huge emphasis, and players have responded.”

Matthys, who is entering his 14th season as head coach and his 24th with the program, said the Cardinals return a wealth of talent on both sides of the ball.

Senior Cade Walker and junior Cole Hoesly are battling for the starting quarterback spot, with junior tailback Gage Boegli and senior fullback Braden Cook set in the backfield. Connor Green returns at wide receiver after leading the team in receptions (18), yards (336) and touchdowns (3) in 2019. Senior Devon Anderson will line up opposite Green, with junior Brady Malkow at tight end.

“We have good speed at the skill positions, which will be a plus,” Matthys said. “Plus, we return two quarterbacks that started all our games in 2019.”

The offensive line will be anchored by seniors Kaden Harper, Ben Knuth and CJ Kammholz, along with junior Colton Buttke.

Defense was a sore spot for the Cardinals in 2019. They allowed more than 29 points a game, including 42 in a playoff loss to River Valley.

“Defense is an area we need to improve,” Matthys said. “Particularly, getting off the field on third down. We took a big step last year, but too many third-down conversions killed us.”

Knuth and Malkow are slated to start at defensive end, with Cook and Buttke at linebacker. Sophomore Austin Moe will play on the defensive line, with Hoesly in the secondary along with sophomores Ayden Vondra and Leon Saunders.

“We have some very talented underclassmen that will be expected to grow and contribute as the season moves forward,” Matthys said.