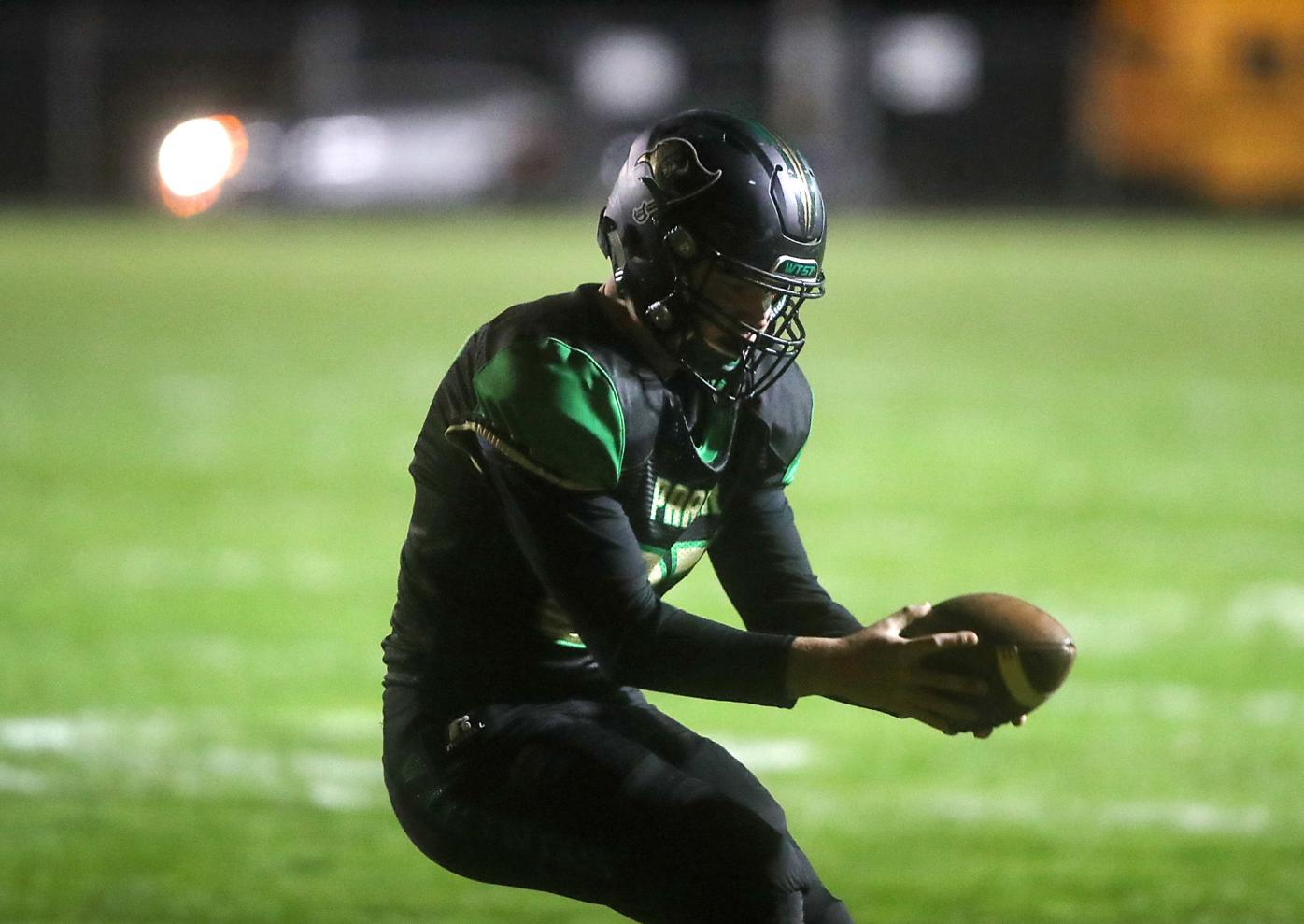 Janesville Parker's Matthew Hartwig carries the ball over the goal line after the reception during their home game against Beloit Memorial on Friday, Oct. 18 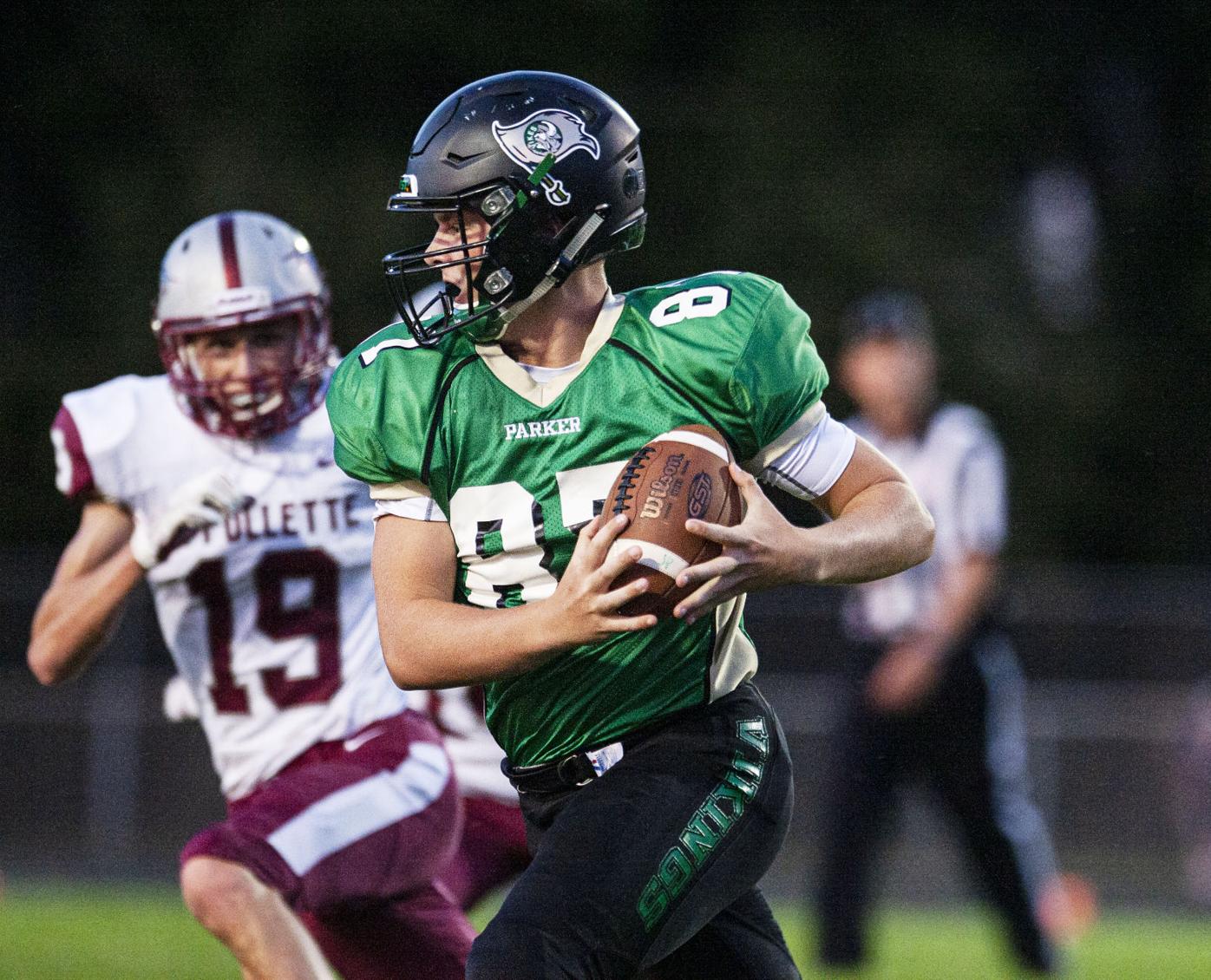 Janesville Parker tight end Matthew Hartwig earned all-Big Eight Conference honors last season as a junior, and he will be counted on to be a big piece of the Vikings’ offense when the team plays this spring. 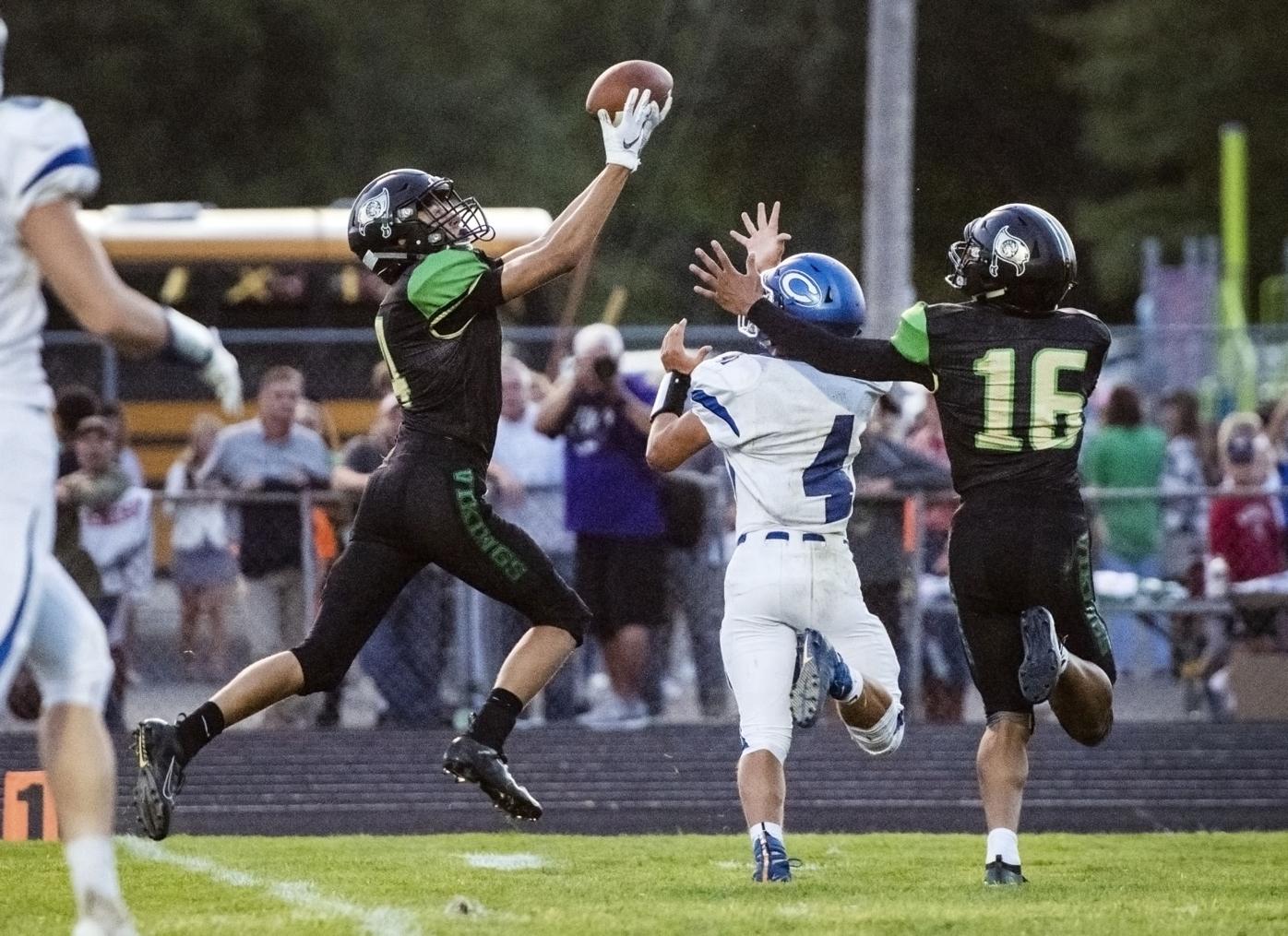 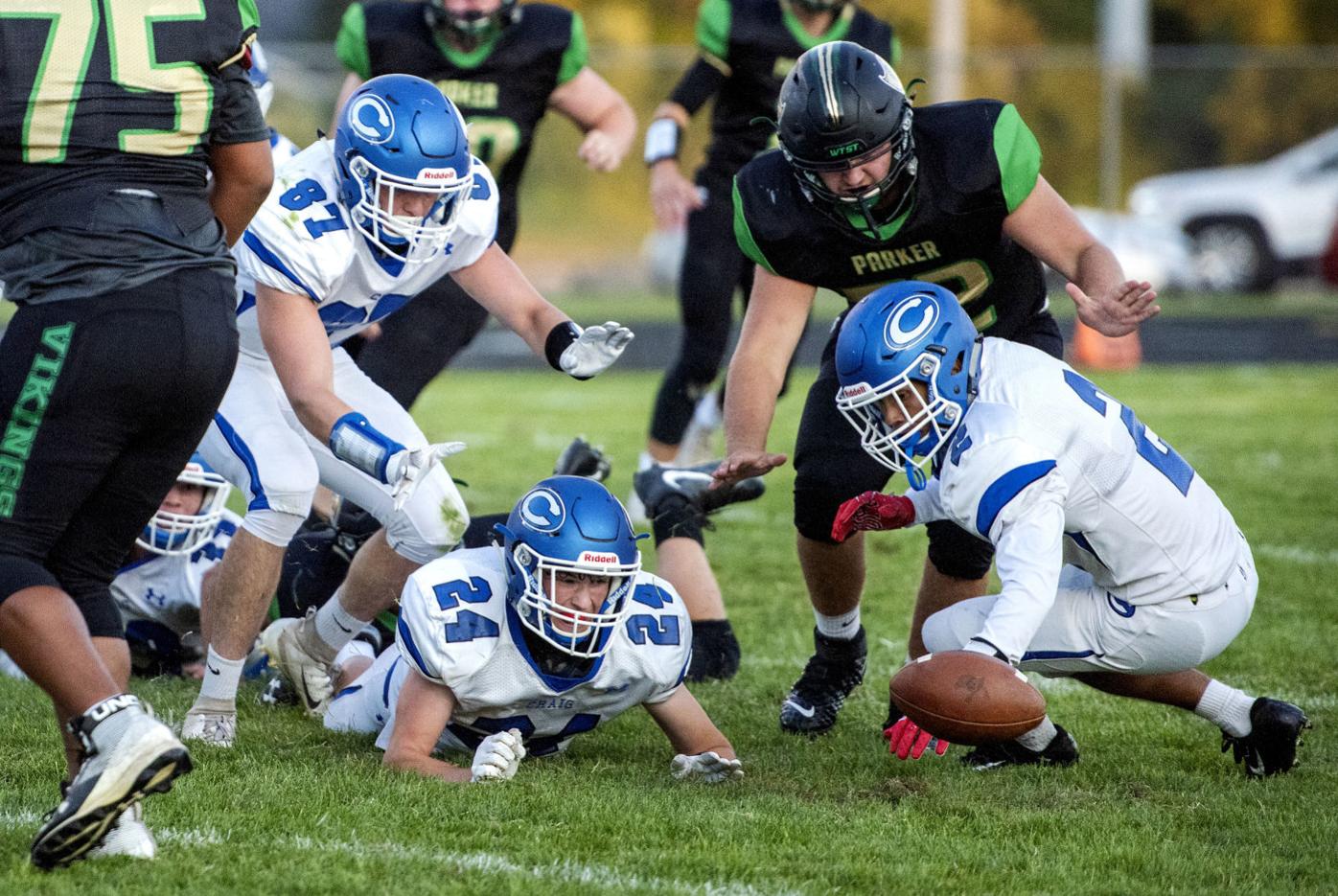 From left, Craig's Magnus Jenson (87), Craig's Eric McLevige (24), Parker's John Simons (52) and Craig's Marshaun Harriel (2) dive for a ball fumbled by a Parker player Friday, August 30, 2019, at Monterey Stadium in Janesville. The Cougars came up with the ball.

Janesville Parker's Matthew Hartwig carries the ball over the goal line after the reception during their home game against Beloit Memorial on Friday, Oct. 18

Janesville Parker tight end Matthew Hartwig earned all-Big Eight Conference honors last season as a junior, and he will be counted on to be a big piece of the Vikings’ offense when the team plays this spring.

From left, Craig's Magnus Jenson (87), Craig's Eric McLevige (24), Parker's John Simons (52) and Craig's Marshaun Harriel (2) dive for a ball fumbled by a Parker player Friday, August 30, 2019, at Monterey Stadium in Janesville. The Cougars came up with the ball.

While the majority of area high schools are sidelined, the football programs at Delavan-Darien, Elkhorn and Lake Geneva Badger begin practice Tuesday.

Those three schools are tentatively scheduled to play a seven-game Southern Lakes Conference schedule beginning Friday, Sept. 25. The Wisconsin Interscholastic Athletic Association has yet to decide if there will be a postseason tournament this fall.

Elkhorn opens the regular season at defending Southern Lakes champion Waterford. The Elks were 1-6 last season in the conference and 2-7 overall.

Elkhorn Area High principal and former athletic director Dan Kiel, along with new athletic director John Handel, said changes are in place for the first day of football practice, but they are hopeful it will be business as usual come game time.

“There’s no doubt that practices are not going to be able to be run like they have been in the past,” Kiel said. “And our coaches know that. They’re going to be limited to coaching and instructing in small groups.

“And you have to remember that with school starting on Tuesday, as well, football will be the last contact these kids have during the day. It starts at home, and then you have school, followed by practice afterward. It’s going to be really important that if a kid’s not feeling well, that he or she stays home.”

“We’ve had no issues at all yet,” Handel said. “And if we do, I believe we’ve got the proper protocols in place.

“All of our fall athletes were issued masks or gaiters. The only problem we have with that right now is that we have to figure out a solution for the gaiters, because football players aren’t going to be allowed to wear them.”

Hopefully it truly will be business as usual Tuesday for those state schools that opted for a fall football season.

As we reach what would’ve been Week 3 of the original 2020 high school football calendar, let’s take a look at the prospects for Janesville Parker, which opted for a truncated 2021 spring season.

Parker on the move

The Vikings struggled to a 1-8 campaign in their final season in the Big Eight Conference last year.

Parker picked up its lone victory in Week 9 against Beloit Memorial.

In moving to the Badger Large Conference this season, Parker was expected to be much-improved thanks to an influx of young talent and a strong offseason workout program.

“We are expecting 25, yes I said 25, returning seniors, and many have been in the varsity starting lineup since their sophomore year,” Parker coach Clayton Kreger said. “This group is excited and ready for a very special season! We anticipate having a ton of success this year; however, we are also very mindful that games will be won by outworking our opponents from now until March 8.

“And I also don’t want to take anything away from all of our juniors, sophomores, and freshmen, because many have been working at a high level to develop themselves as students, athletes, and leaders in our program and our community.”

As a longtime member of the Parker football program—both as a player, assistant coach and now head coach—Kreger has been part of many memorable games with the Vikings.

Although he played on two Big Eight championship teams, he says beating Verona 20-17 in 2015 as the head coach stands out the most.

“We beat Verona that night in overtime, and it was the first time Parker had beat Verona since they joined the Big Eight,” Kreger said. “That group of kids was special because they bought into our program, they believed in each other, believed in the “next man up” philosophy, and believed they could build a winning season.

“We were down 7-0 at half, lost our starting quarterback, Jordan Bailey, in the first half to an injury and two offensive linemen, as well.

“I remember relying on our defense all night as they did an amazing job stopping Verona’s high-powered offense. The offensive line stepped up and gave Austin Zane plenty of time to complete a 20-yard pass to Darin Empereur to set up a 4th and 5 in overtime. I get chills just thinking about it ... the fourth-down play, as Austin took a five-step drop and saw Jadyn Ellis creating separation down our sideline. It was like watching a movie in slow motion as Jadyn went up over several defenders in the end zone.

“As he came down with the ball, our entire team was there to celebrate with him in the end zone.”

Would-be game of the week

Had the season started normally, Parker and Craig would be getting their first taste of the new Badger Large Conference this week.

For the Vikings, that would have meant a home game at Monterey Stadium against Division 2 state powerhouse Waunakee.

The Warriors have won four state titles in the last 11 years and finished runner-up two other times during that span.