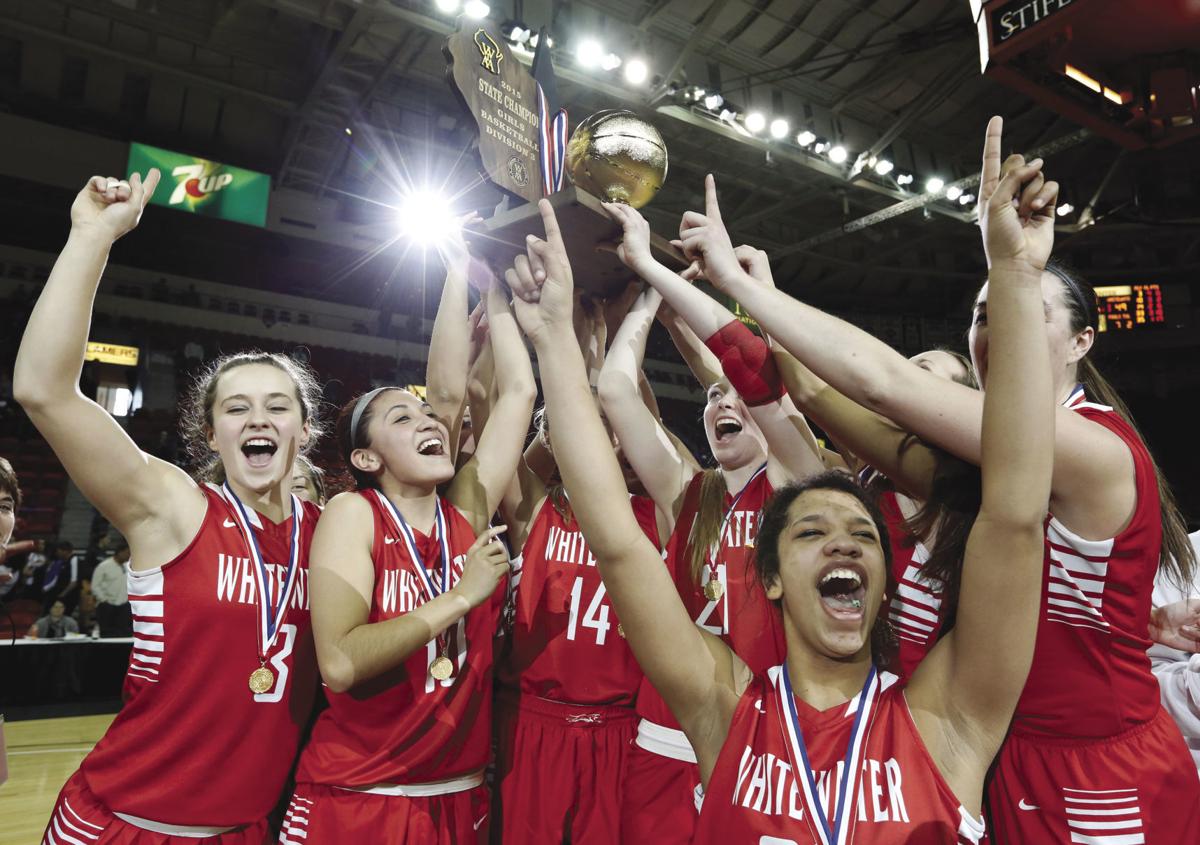 Whitewater players raise their championship trophy after defeating Xavier in the Division 3 finals in the WIAA girls state basketball championships in 2015. This might help you answer question 19. 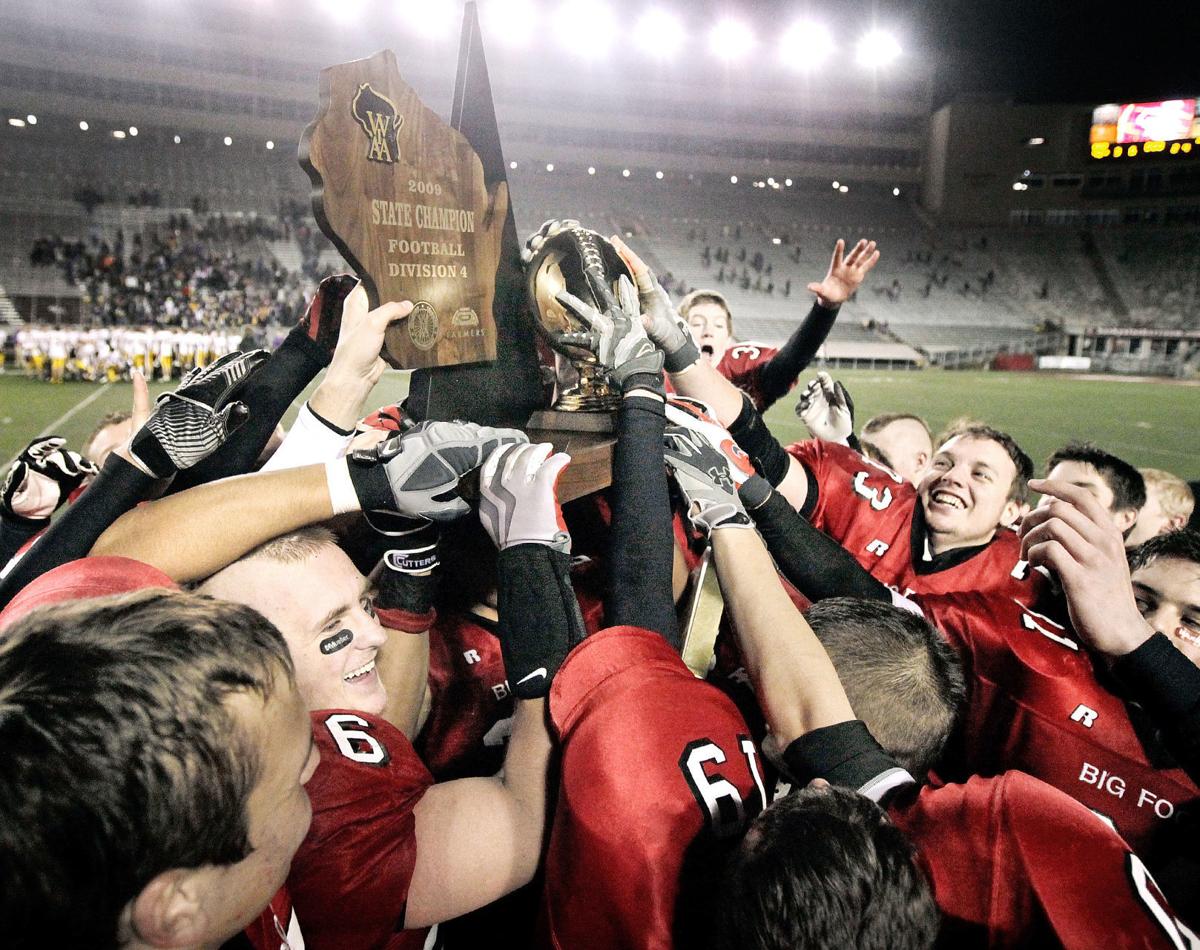 Big Foot players all try to get to touch their trophy after winning the Division 4 State title game at Camp Randall stadium in 2009.

Whitewater players raise their championship trophy after defeating Xavier in the Division 3 finals in the WIAA girls state basketball championships in 2015. This might help you answer question 19.

Big Foot players all try to get to touch their trophy after winning the Division 4 State title game at Camp Randall stadium in 2009.

This time, Wedeward is back to see how much you know about the history of area high school sports.

Who were the eight original members of the Southern Lakes Conference in 1953?

3. Who were the five starters on that team?

4. Who beat that 21-0 team in an open-class WIAA regional championship game?

5. Besides claiming the title, what did Elkhorn’s victory in the 1979 Class B boys state basketball championship game accomplish?

6. Who was Lake Geneva Badger’s Associated Press first-team all-state running back in 1973?

7. Who from Clinton holds the record for most field goals made by a single player in a girls WIAA Class B state basketball tournament game?

8. Who scored 2,036 career points for Orfordville Parkview in boys basketball?

9. Who was Brodhead/Juda’s all-state football player and 100-meter dash state champ in 1994?

10. What was Fort Atkinson’s nickname before it became the Blackhawks?

11. Why did Fort change its nickname?

12. Who are the three brothers who brought football and track prominence to Beloit Turner in the 1980s and 1990s?

13. Who did Elkhorn beat in the 1997 Division 2 girls state championship basketball game?

14. Who from Milton holds a WIAA football playoff rushing record, and when was it set?

17. What former Delavan-Darien football coach had a poem written about his love of the single-wing offense?

21. Who from Clinton was WIAA executive director Doug Chickering addressing when he said “You’re an inspiration to us all”?

22. Who is LaMont Weaver, and why is he famous?

25. Between boys and girls, who coached eight Whitewater High cross country teams that finished first or second in the state?

4. Janesville Craig used a 19-2 advantage in the fourth quarter to hand Evansville its only loss in 22 games, 51-50, in a regional final at Janesville Parker. An Evansville fan later wrote to Craig coach Stan DuFrane: “Now you know what it feels like to lose 51-50,” after the Big Eight champion Cougars lost by that score in the 1971 regional semifinals to eventual state champion Parker.

5. Coach Fred Suchy’s Elkhorn team needed a 79-66 victory over Prairie du Chien in the 1979 Class B boys state basketball title game to have a winning season with a 13-12 record.

7. In the first girls WIAA state basketball tournament, Clinton’s Vicky Voss made 15 field goals in a 1976 championship game against Lancaster. With that, Voss has a Class B tournament record that has lasted all this time, but Lancaster won that game, 49-41.

8. Paul Johnson, who graduated in 1966, scored 2,036 points for Parkview basketball while leading the Vikings to two of only three conference championships in school history.

9. Jared Arn was an AP first-team all-state running back for Brodhead/Juda’s 1994 football team while leading the Cardinals to their third of 25 straight WIAA playoff berths. He won the Division 2 state championship in the 100 dash the previous spring.

11. When Sun Prairie joined the Badger in 1963, it gave the conference three sets of Cardinals (also Middleton) among the eight schools. Fort Atkinson wanted no part of that and soon made the change to Blackhawks.

12. Travis, Anthony and Ty Talton played key roles in putting Turner on the map in football and track. The Trojans were WIAA Division 4 state football runners-up in 1987 and champions in 1988. They also won the Division 2 state track championship in 1987. Ty went to the awards podium three times in the state track and field meet on June 4, 1994, as 200 dash and 300 intermediate hurdles champion and the 110 high hurdles third-place finisher. He later played for the Detroit Lions in the NFL.

15. Milton High’s athletic field is named after Carl F. Anderson, who coached Milton Union football for 34 seasons (1929-63), won nine conference championships, had a 146-83-17 record and was the school’s athletic director until 1970.

17. Coach Wally “Blackie” Zimmermann rode the single-wing offense to a 155-73-13 record as head football coach at Delavan and Delavan-Darien from 1949-76.

21. Doug Chickering’s inspirational comment was directed to Ann Harsevoort, Clinton’s High legendary band director, during the 2003 girls state basketball tournament, while the Cougars were winning the Division 3 championship. Ann was 76 at the time, and she passed away at age 88 in 2015.

22. LaMont Weaver is a former Beloit Memorial and University of Wisconsin basketball player, who is most famous for the 55-foot shot he made with no regulation time remaining in the 1969 WIAA state championship game. That shot (long before 3-pointers existed) forced a 70-70 tie with Neenah, and the unbeaten Purple Knights won 80-79 in double overtime with two free throws by Weaver.

24. Larry Gnatzig, a Whitewater Whippets star in three sports in the early 1970s, frequently brought his Houston (Texas) MacArthur cross country teams to the Midwest Invitational in Janesville. He was MacArthur’s head coach for 28 years and has an invitational meet named after him.