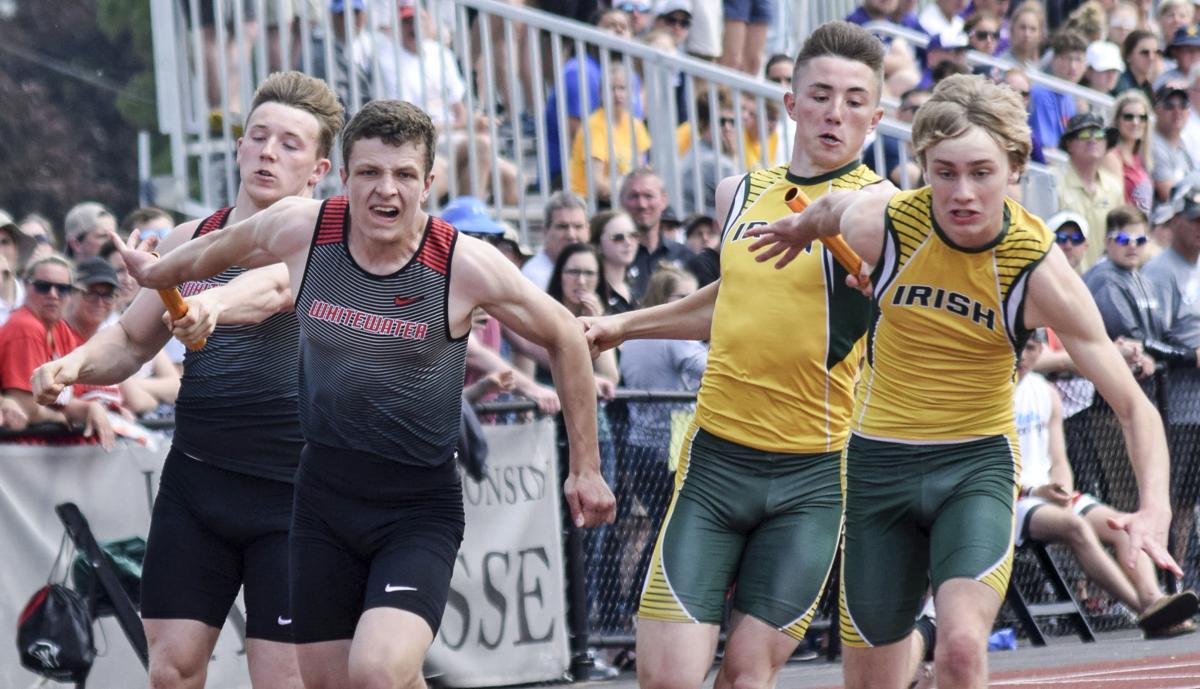 Whitewater’s Jared Clapper takes the baton from Will Leibbrand for the third leg of the Division 2 boys 400-meter relay during the WIAA state track and field meet in La Crosse last spring. The Whippets team, which also included Juan Cuellar and Jack Mayer, took fourth in this race and was second in the 800-meter relay. All four runners were set to be seniors on the track team this spring. 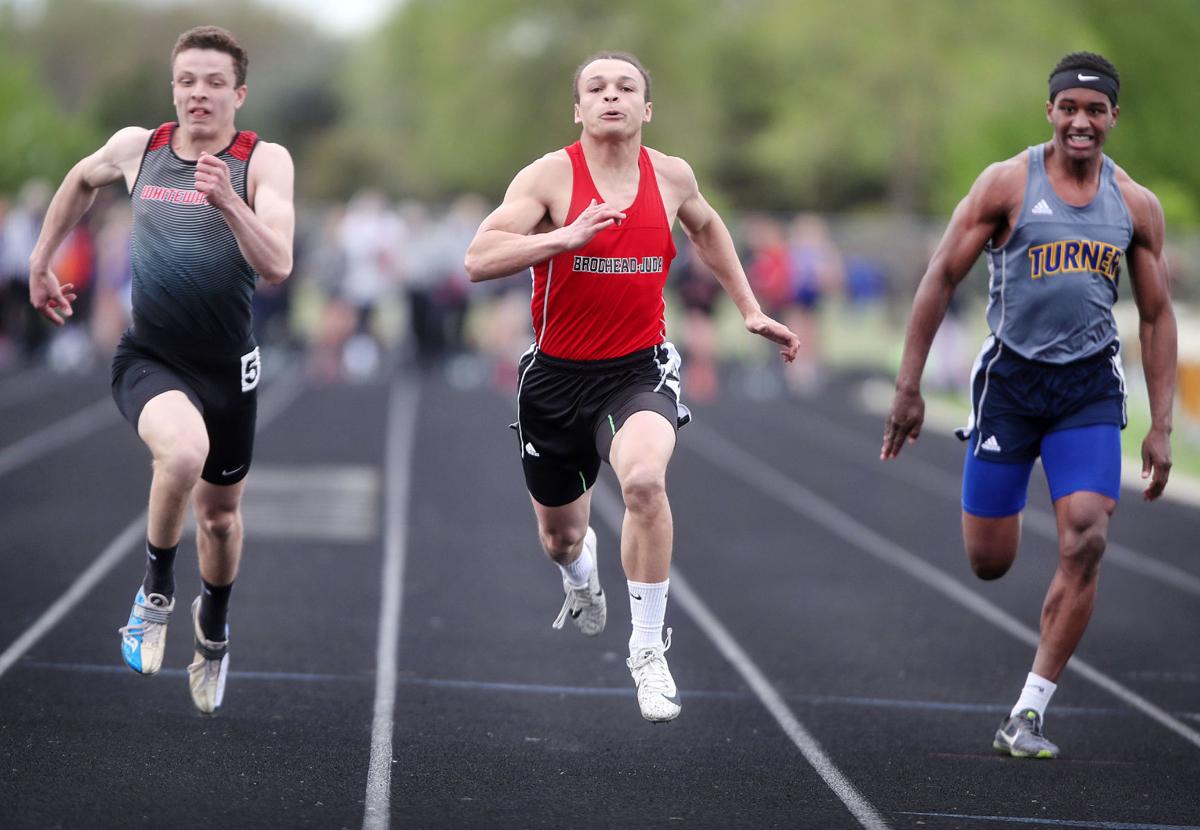 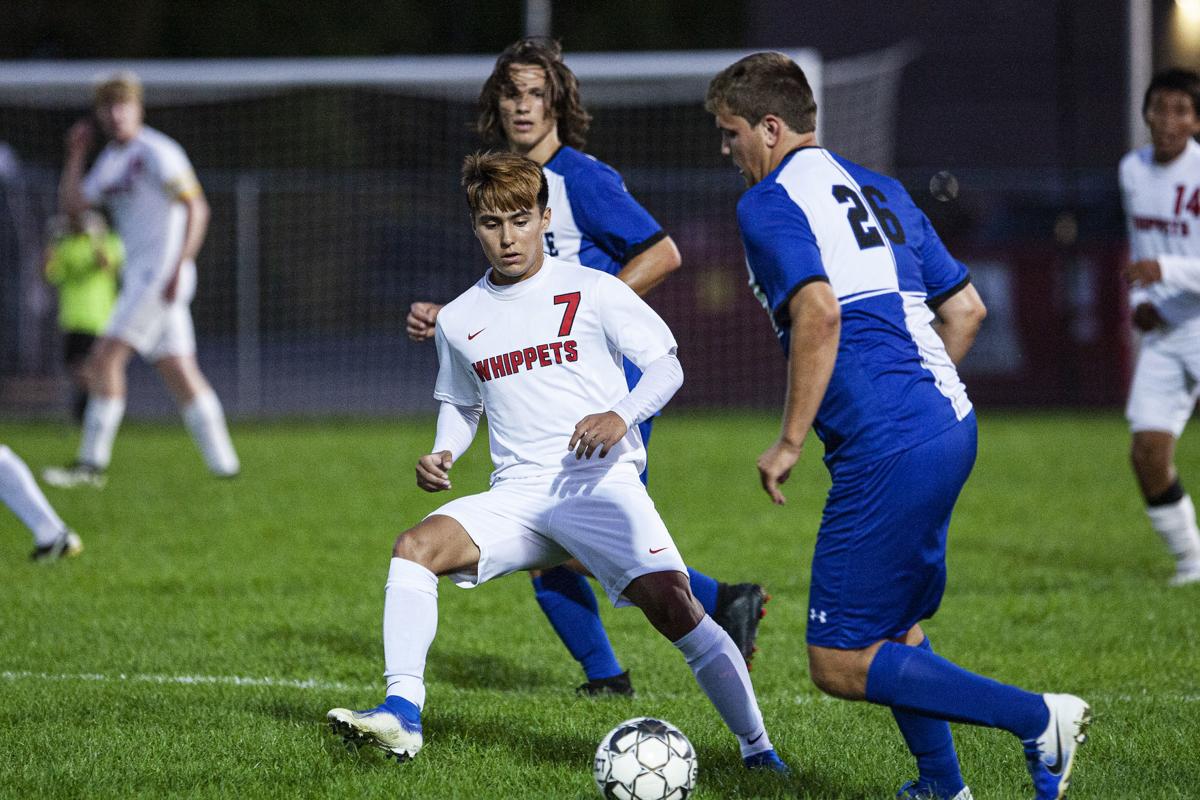 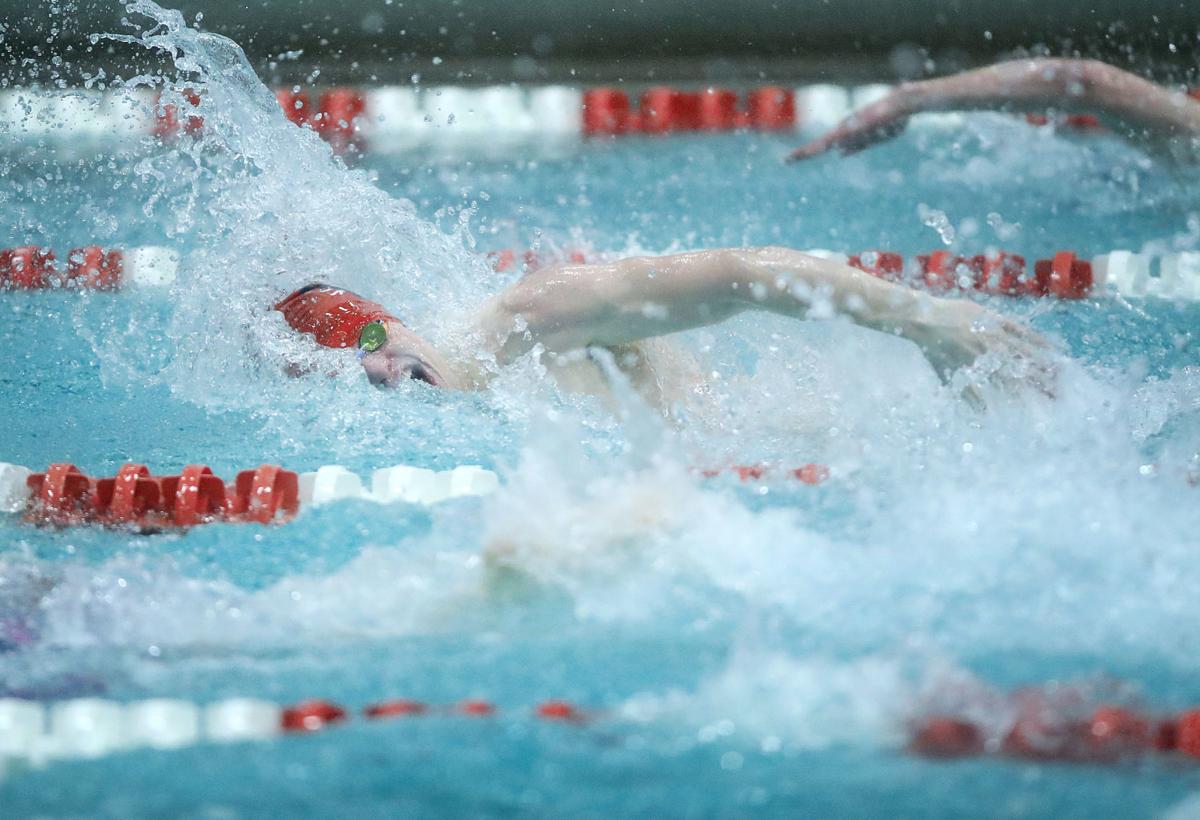 Whitewater’s Jack Mayer competes in the 100-yard freestyle during the WIAA Division 2 state boys swim meet at the University of Wisconsin Natatorium in February. Mayer is no stranger to state competition, as he was part of the Whippets’ two state medalist relay teams last spring.

Whitewater’s Jared Clapper takes the baton from Will Leibbrand for the third leg of the Division 2 boys 400-meter relay during the WIAA state track and field meet in La Crosse last spring. The Whippets team, which also included Juan Cuellar and Jack Mayer, took fourth in this race and was second in the 800-meter relay. All four runners were set to be seniors on the track team this spring.

Whitewater’s Jack Mayer competes in the 100-yard freestyle during the WIAA Division 2 state boys swim meet at the University of Wisconsin Natatorium in February. Mayer is no stranger to state competition, as he was part of the Whippets’ two state medalist relay teams last spring.

Jack Mayer and Will Leibbrand decided to change things up as sophomores, going out for track and field instead of baseball.

Juan Cuellar was already on the team and quickly became their workout and relay partner.

And by the end of that 2018 season, Jared Clapper was coming into his own as the newest speedster.

When they all got together on the track last spring, good things started happening almost immediately. Cuellar, Leibbrand, Clapper and Mayer started rewriting the Whitewater High record books and ended their junior year with multiple state medals.

They finished in second place in the Division 2 boys 4x200-meter relay at the WIAA state track and field meet last spring. And after coming so close to the top spot on the podium, it did not take long for them to start talking about making a run at a state championship as seniors.

“Ever since then, all four us have just been wanting to break records and get first place at state,” Mayer said. “Will, Jared and I, we would go in after school. We’d always talk about looking forward to spring track. So it was a little bummer not being able to finish it up this spring after looking forward to it for a long time.”

The Whippets’ quartet should be about a week away from regionals and beginning the run back to the state meet. Instead, the coronavirus pandemic has wiped out the entire spring season.

“You never know what’s going to happen at the state meet. It’s nothing like anything the kids compete in all year. What you did last year, everything can change,” Whitewater head coach Mark Maas said. “But this group of sprinters, they are amazing leaders, hard workers and would do anything to be successful.

“They had big plans.”

That the group even found itself together on the track is an adventure of its own right. Mayer and Leibbrand went out for baseball as freshmen, and the thought of competing in track and field began mostly on a whim.

But eventually they decided they would switch their spring sports as sophomores.

“Will and I played a lot of baseball before then,” Mayer said. “And we didn’t hate baseball at all, but we had run track in middle school together, as well.

“We figured if we were going to switch it up, we should do it then.”

Even then, the spring sports season was almost more of an afterthought. Leibbrand was an all-Rock Valley Conference wrestler and football player who is set to play football at UW-Oshkosh. Mayer was a state qualifier in boys swim in the winter.

Still, the switch to track came with near-immediate success, and their sophomore season ended with a trip to UW-La Crosse for the state meet.

Mayer and Leibbrand teamed with Tyler Sheffield and Sashi Popke to make state in both the 4x100 and 4x200 relays. They medaled with a fifth-place finish in the 200, turning in a time of 1:30.90 in the prelims.

Last fall, the wheels were set in motion for Cuellar and Clapper to join Mayer and Leibbrand.

Cuellar, an all-conference boys soccer player in the fall, had previously focused on longer sprints like the 400 and 800 in track and field. That meant he had some experience practicing, handing off and running with Mayer and Leibbrand.

Mayer had shown his speed but was a relative newcomer in the relays.

“I was the new guy of the four, and so I was more nervous about filling the role,” Clapper said. “They had done well the previous year, and I didn’t want to let everybody down.”

“A lot of the time, especially from my experience, it’s a lot of repetition at lower intensities,” Bee said. “The philosophy we went to is if you want to run fast, you have to train fast. So the majority of the time at practice, we’re going 100% in our sprints.”

Bee said some coaches worry that training like that will lead to more injuries, but last spring, it actually led to fewer for the Whippets.

Still, the theory was new, so the Whippets coaches were unsure of what to expect in terms of immediate results.

“We thought we’d have this group two years, so it was kind of a testing year for us to see if the training would work,” Bee said. “At the beginning of the year, I wouldn’t have guessed we would break the 4x2 record that had stood for over 40 years.

“It wasn’t that it (success) wasn’t expected, it was just a matter of would the training work and how would they adapt? They bought in pretty early.”

And the results showed by the end of the year.

The Whippets won sectional titles in both the 4x100 and 4x200. Clapper also qualified for state in the 100-meter dash, and Cuellar showed his versatility by leading off a 4x800-meter relay that also qualified.

“We all worked very hard when we were in practice but we also had a lot of fun running with each other,” Cuellar said. “I think that’s the main reason all of this worked out.”

“Chemistry was a big thing,” Bee said. “Always having some of the same legs and handing off to the same kids, you kind of get a feel for how those kids accelerate.”

With another spring to continue building momentum, would the record books have continued to be rewritten? Might the Whippets have brought home a state championship?

Unfortunately, the world will never know.

But Bee is excited to see some of them show off some of their still untapped potential at the next level.

For Leibbrand, that will be on the football field, and Clapper is still considering walking on when he gets to school at BYU.

“I was hoping this year to establish times that might make me more confident about doing that,” Clapper said. “So I don’t know at this point.”

But for Cuellar and Mayer, the next step means rooming together at Division III University of Dubuque and continuing to compete together in track and field.

“I think that will be really fun,” Mayer said. “We’re still kind of new friends, but I think it’ll be comforting going there and knowing someone.”

“They still really don’t know what they’re capable of,” Bee said. “I tried to use that and tell them, ‘You’ve only been doing this three or four years. If you can go four more, you have no idea what the ceiling is.’”

Between that message from his coach and a spring with no sports, Mayer is champing at the bit to find that ceiling.

“With no running this season,” he said, “I’m going to do everything I can to make sure next year is as good as can be.”