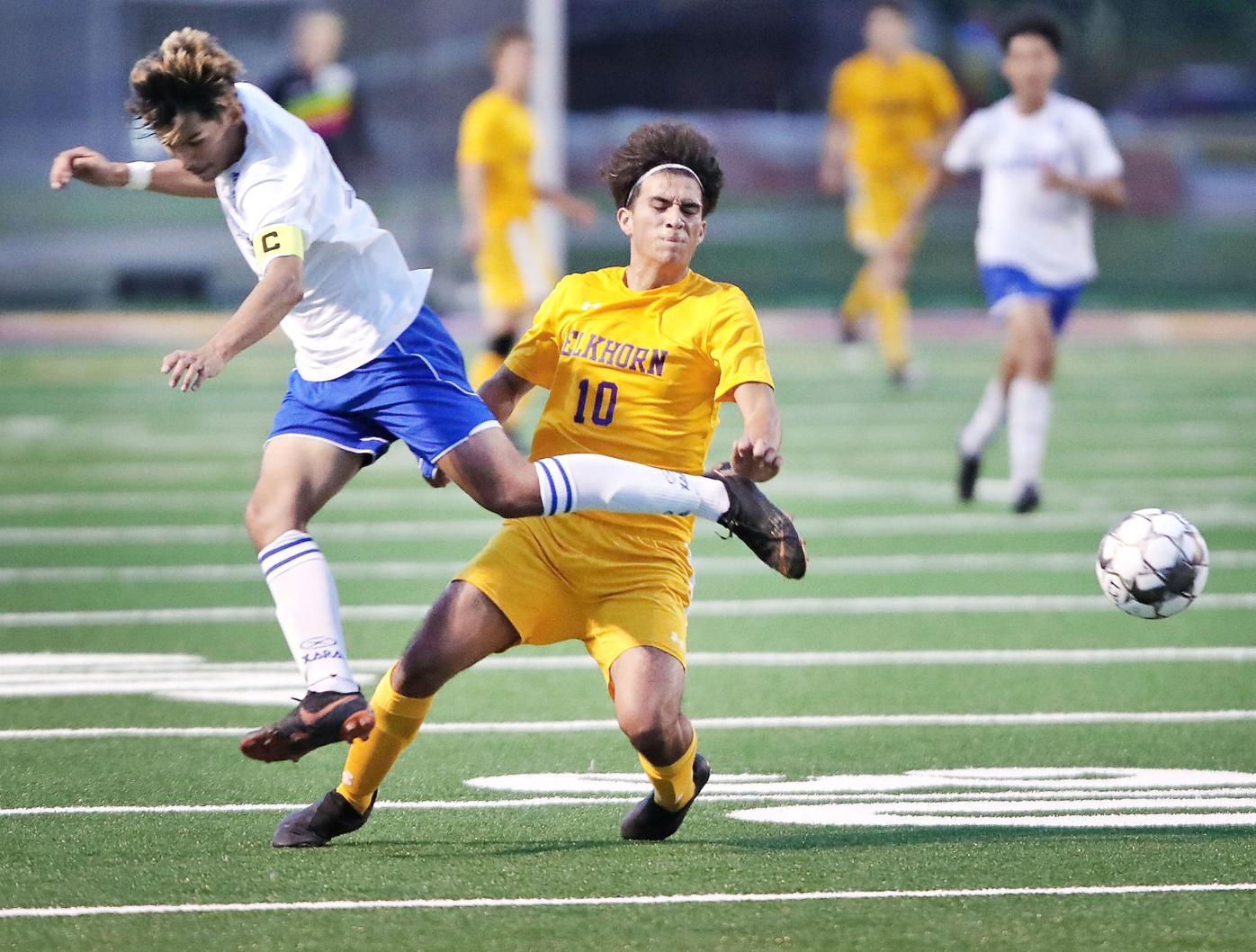 Elkhorn’s Gavin Perez and Adrian Fonseca narrowly miss each after both trying to kick the ball during their match in Elkhorn on Thursday, Sept. 17. 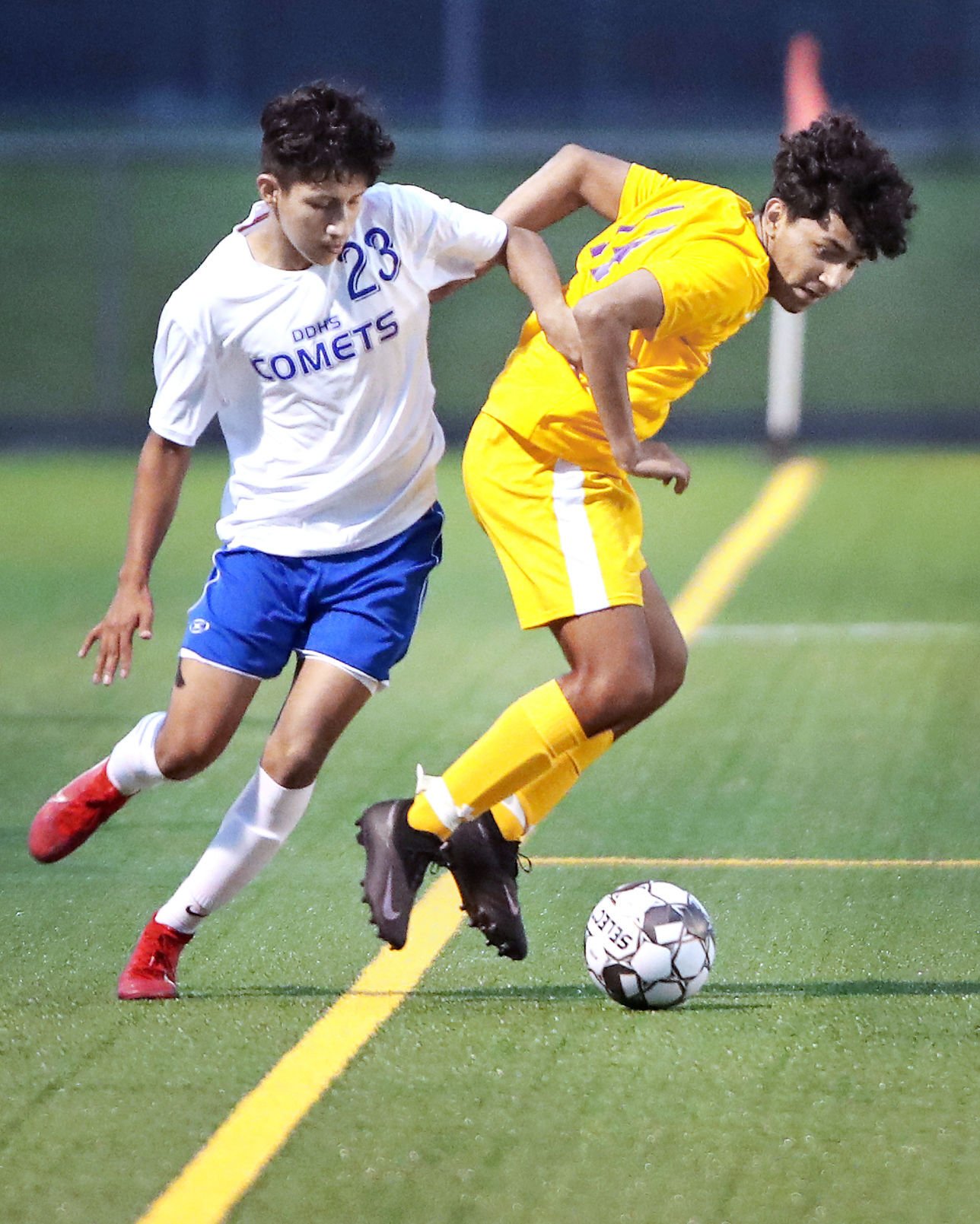 Elkhorn’s Aaron Paniagua tries to hold Delavan-Darien’s Andy Elguero, left, away from the ball during the first half of their match in Elkhorn on Thursday, Sept. 17. 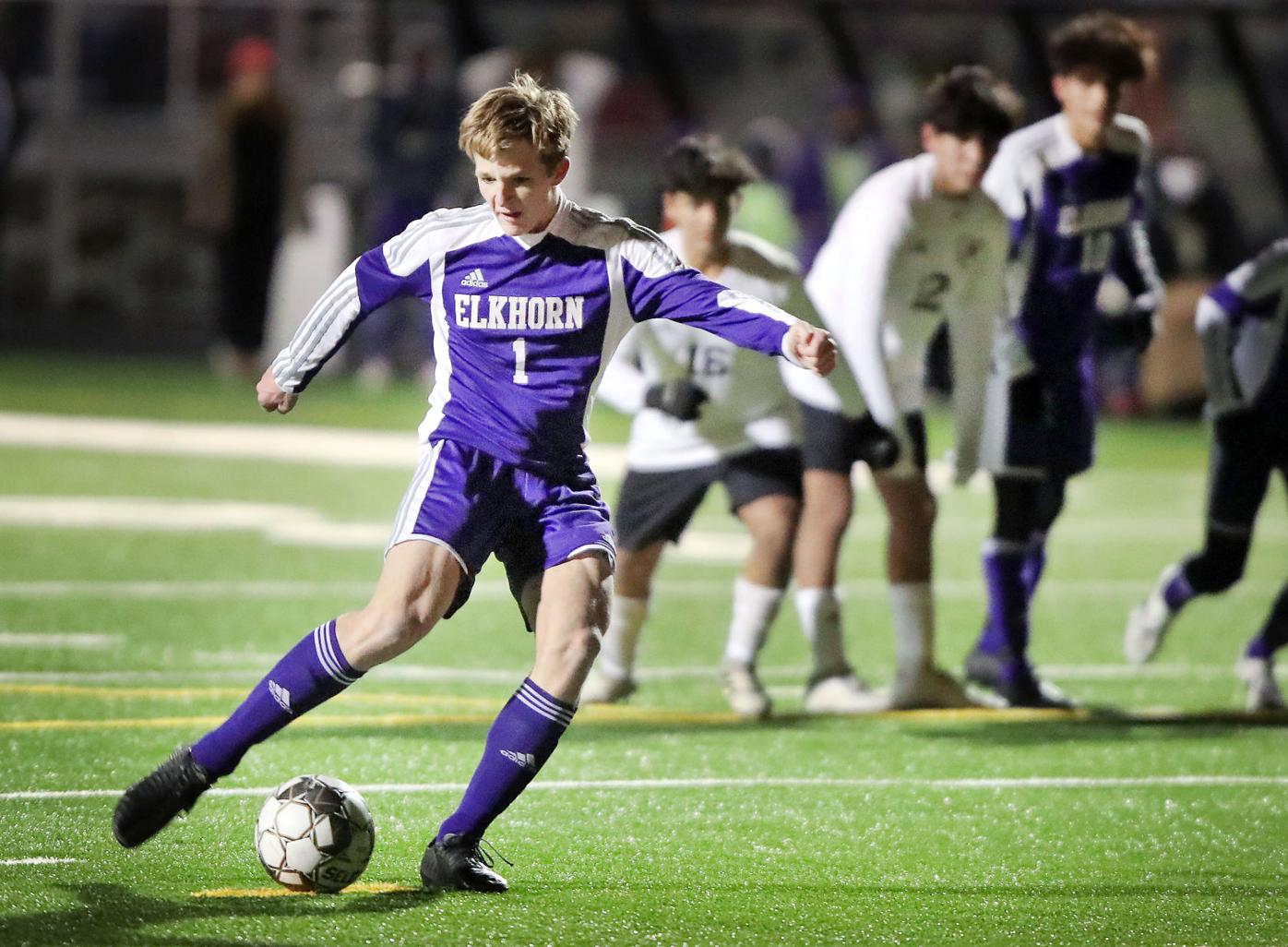 Elkhorn’s Gavin Perez and Adrian Fonseca narrowly miss each after both trying to kick the ball during their match in Elkhorn on Thursday, Sept. 17.

Elkhorn’s Aaron Paniagua tries to hold Delavan-Darien’s Andy Elguero, left, away from the ball during the first half of their match in Elkhorn on Thursday, Sept. 17.

Elkhorn’s boys soccer team began this season on a mission to keep a streak alive.

Knowing that they might not play any matches outside the Southern Lakes Conference, the Elks’ main focus was extending their unbeaten run and winning a fourth straight SLC title.

They checked that main goal off the list weeks ago, but they are not finished.

Elkhorn (13-0), ranked fourth in the state, is the No. 3 seed in the WIAA Division 1 state tournament, which will be held Saturday in Mukwonago. The Elks face second-seeded Hartland Arrowhead at 11 a.m., with the winner facing either top-seeded Marquette or fourth-seeded Hudson in the title match at 7 p.m.

Just two members of the starting 11 from last year’s Division 2 state tournament qualifying team returned this fall. But sophomore Ray Beilman said it took just one game for the players to realize they had another special group.

“I think from the first game, even though we were a little rusty, we saw the potential that we had,” Beilman said of a 5-1 victory at Westosha Central. “We knew that we could build on that and get better.”

Elkhorn has not looked back.

It followed with a 3-1 victory over Delavan-Darien, a state qualifying team in Division 2. In the 11 matches since then, the Elks have given up a total of four goals, including winning 1-0 in Delavan to cement the SLC title and a 6-0 victory over Muskego in the sectional finals.

A 5-1 victory over Badger in the sectional semis is the only time in Elkhorn’s past six that was not a shutout.

“Once we got progressing through the season, I really gained confidence in the team,” Beilman said. “Everyone gained confidence. We knew we could rely on and trust each other, and we know we can do that going forward.”

Beilman leads the team with 16 goals. Senior Luke Schoeneberg, a four-year player who never lost a conference match, has seven goals and 11 assists, and Gavino and Marco Perez have scored eight goals each. Gavino Perez and Schoeneberg are the only returning players who started last year’s state semifinal match.

Elkhorn also has a first-year head coach in Jordan Kayser. Kayser took over for his father, BZ, and has picked up where he left off. Elkhorn is at state for the fourth time overall and third time since 2016.

“Our club has been really good for our program, and I just became the director of coaching for our club,” Jordan Kayser said. “I’ve been helping with the 8-year-olds all the way up to our sixth- and seventh-graders. We’ve got a really good eighth-grade group coming in.”

First things first, though, an Elkhorn team that did not know if it would get an opportunity to shoot for anything more than a conference championship will attempt to win the program’s first state title.