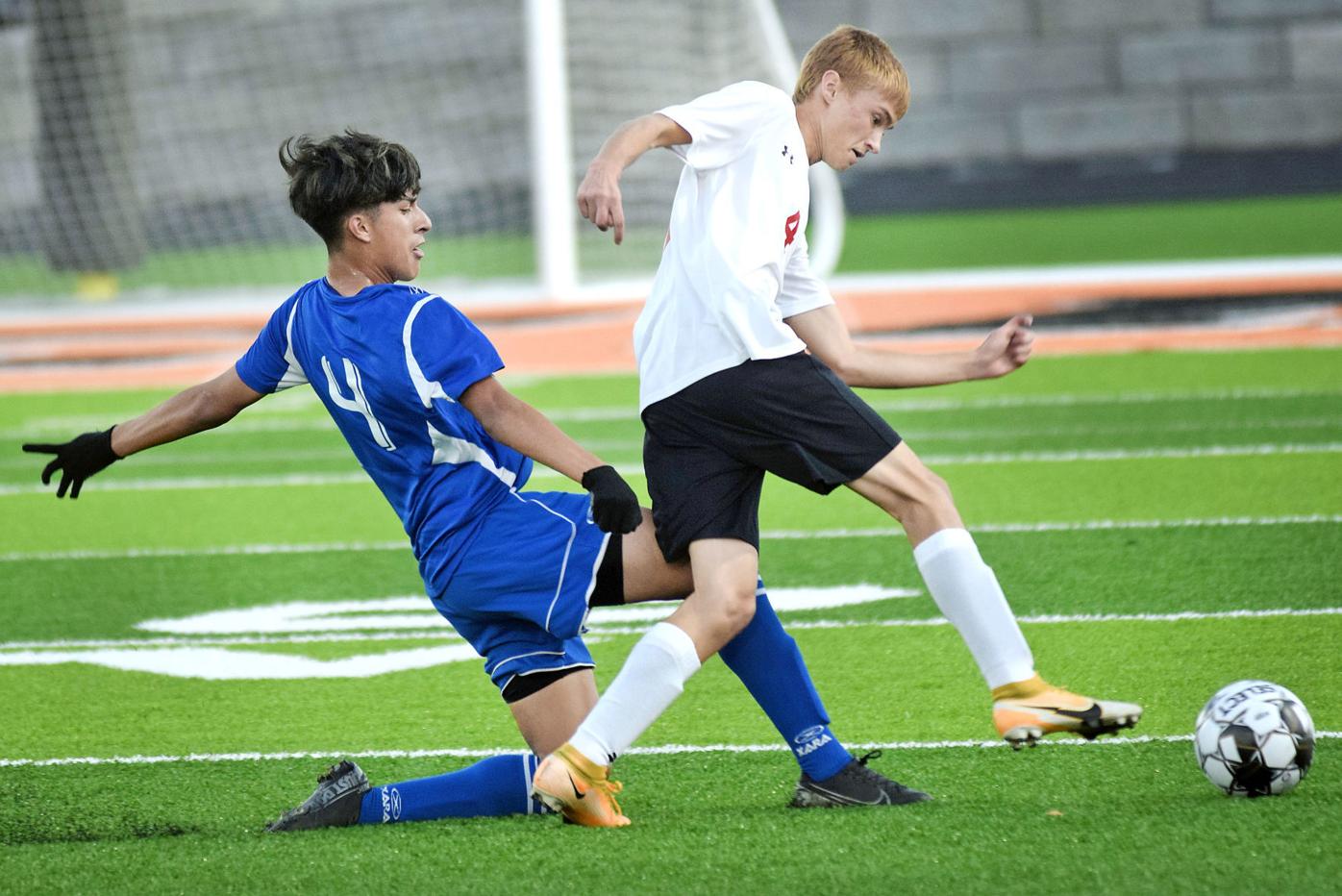 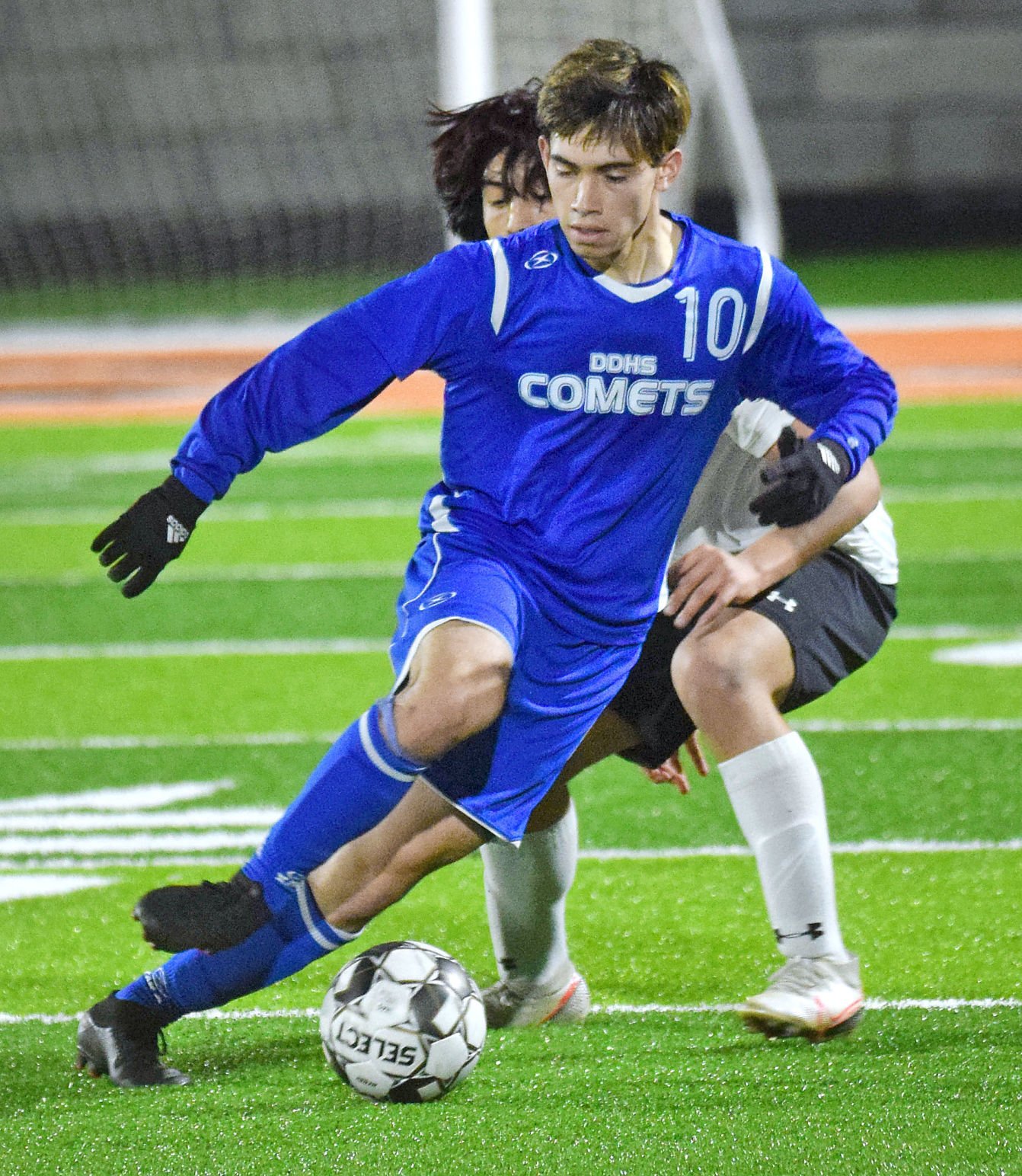 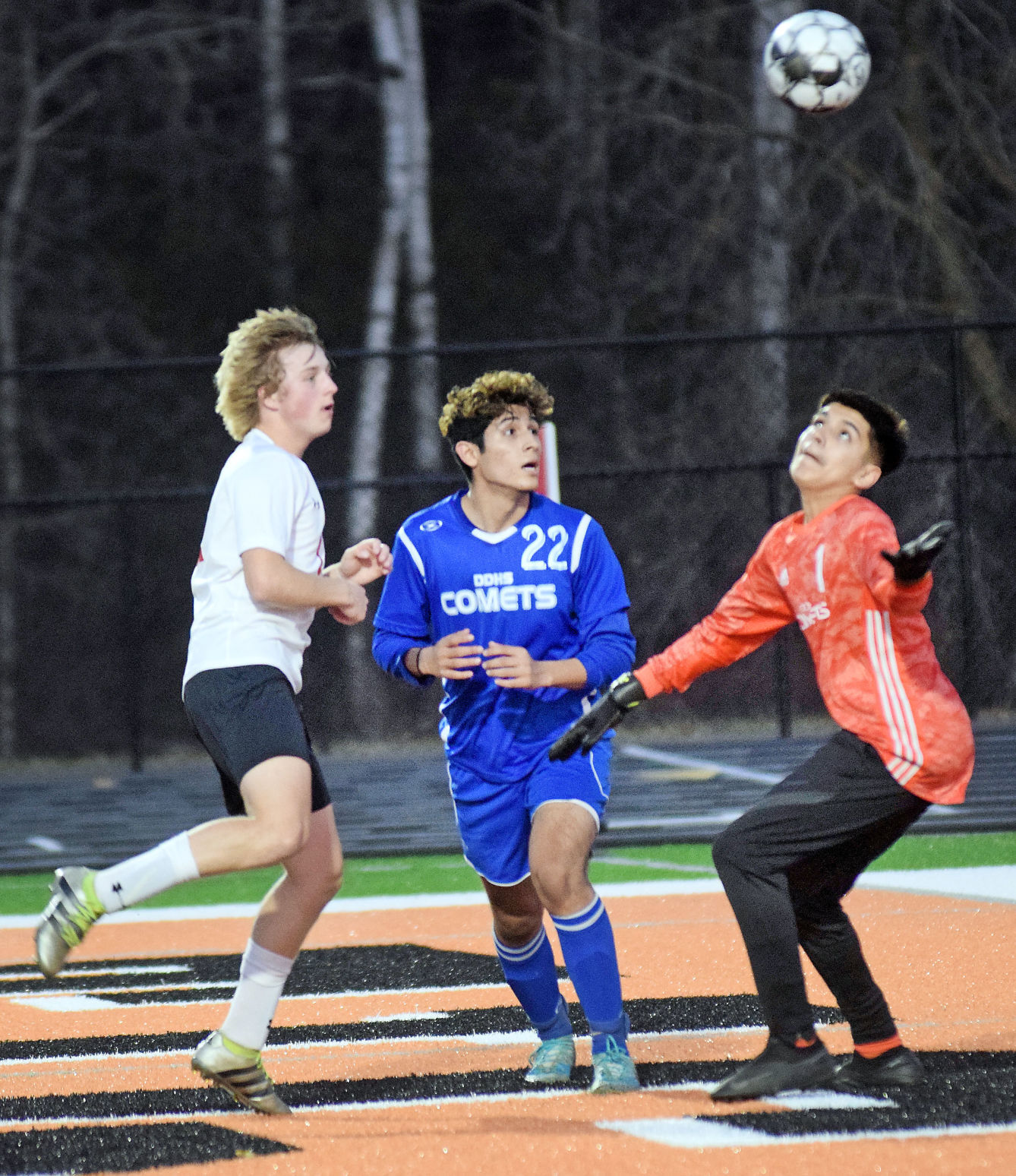 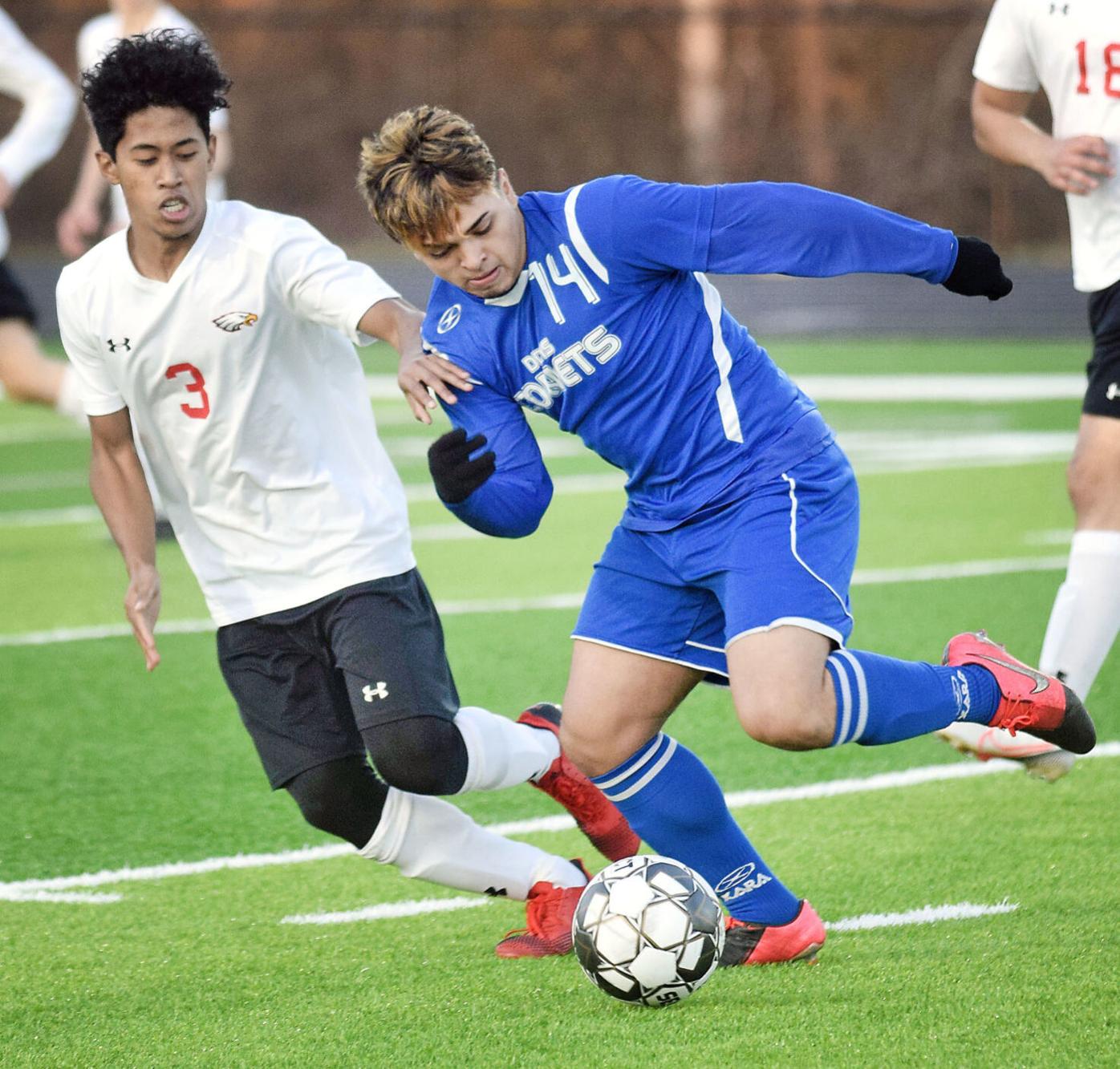 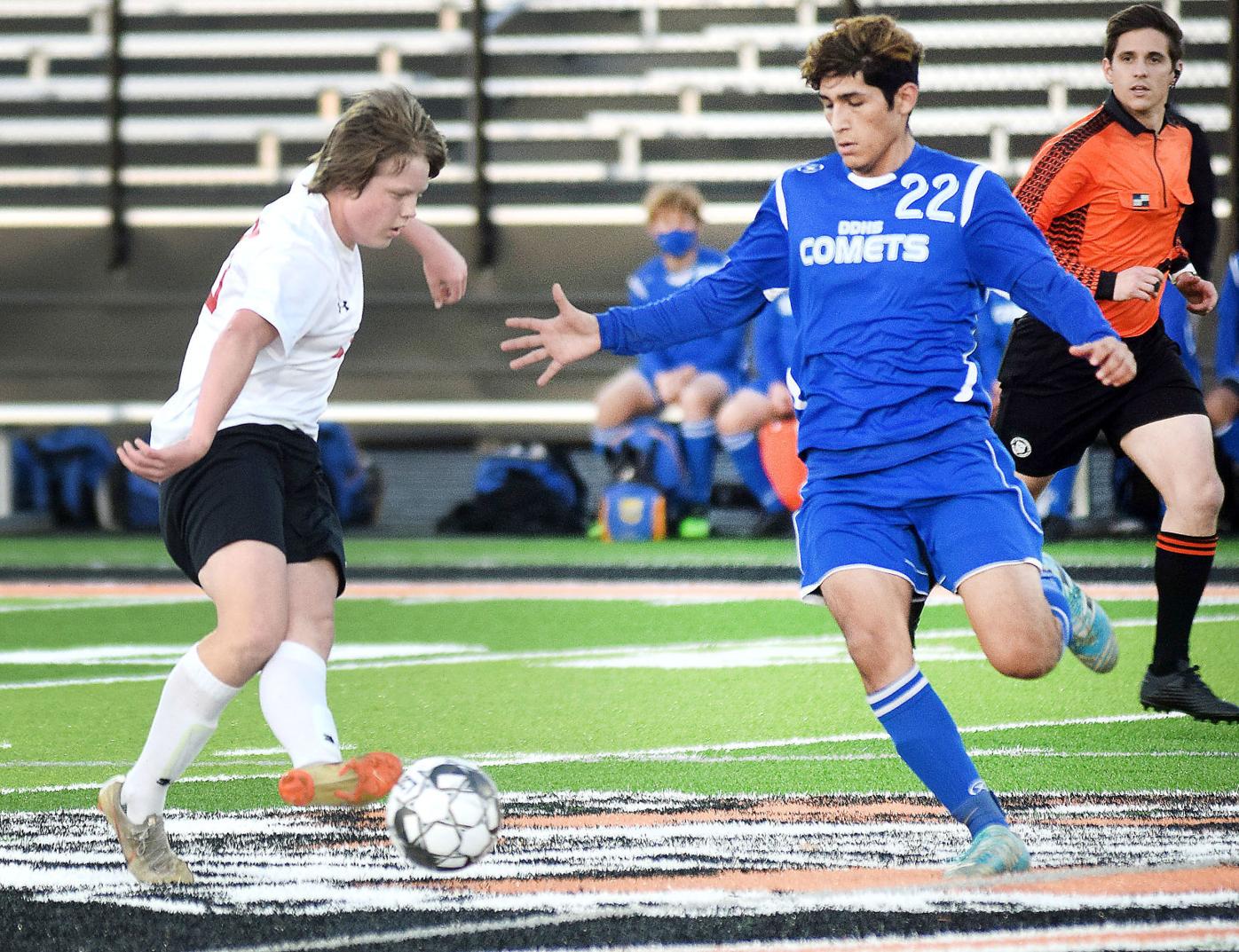 Sometimes it just isn’t your day.

Beginning with a nearly four-hour bus delay, nothing seemed to be in the cards for the Delavan-Darien boys soccer team on Saturday.

Once they finally arrived in Marshfield, the top-seeded Comets were upset by No. 4 Sauk Prairie, 2-1, in a WIAA Division 2 state semifinal match at Lyn Luedtke Field at Kenneth & Ardyce Heiting Community Stadium.

Senior Octavio Valadez scored the lone tally for Delavan-Darien, which outshot and out-possessed the Eagles but could not seal the deal in its first trip back to state since 2017.

“To outshoot and out-possess that team the way we did, to have so many more shots on goal and possess but still lose, is hard to take,” Delavan-Darien coach Mike Marse said. “But it happens once in a while. I don’t know what else to say.

That happened shortly after the Comets hit the road Saturday as their near-three-hour commute was halted an hour in around Madison after their initial bus broke down. Two subsequent replacements also ran into trouble en route, keeping Delavan-Darien stranded for almost four hours before the team finally got to Marshfield High School around 3:45 p.m. The semifinal match was originally scheduled to begin at 2.

The delay took a toll on the Comets (11-3-0) in the opening portion of the first half, and they ultimately trailed 1-0 just before the half-hour mark. Delavan-Darien ultimately found its footing however, and pulled even just before halftime.

Sniffing for an equalizer, with a pair of shots fired into the side net, the Comets broke through behind Valadez in the 43rd minute. After the Eagles (11-2-3) blocked a pair of shots, they couldn’t clear the ball which fell to junior Estevan Colin.

Delavan-Darien’s leading goal scorer fed a pass to Valadez on the edge of the 18-yard box, and he fired a right-footed shot into the upper right corner to even at 1 with 42 minutes, 13 seconds played.

The leveler was a welcome change after the Comets struggled to get quality shots off.

“That’s just something we have a problem with, pulling the trigger. There’s a lot of times where we pass on an open shot to try to get a better one,” Marse said. “That’s something we’ve worked on and talked about all year, but still just aren’t over that hump and it’s some of the younger guys that do that.”

Valadez’s goal injected plenty of life into the Comets coming out of the break as they turned the screws on the Eagles in the opening five minutes and nearly took the lead. Junior Jonathan Diaz curled a shot from the right side of the 18-yard box past the outstretched arms of Sauk Prairie goalkeeper Luke Baumgardt, but it found the left post and the Eagles cleared.

Baumgardt, who made eight stops, came up with another point-blank save shortly after before the Eagles pounced on the counter attack. After clearing the ball, Sauk Prairie junior Sam Drescher picked up the loose ball in the Eagles’ defensive third and darted past four Comets defenders down inside the Delavan-Darien 18-yard box.

With a defender on his back, he squared a pass to junior Quinn Baier and the forward did the rest, firing past Comets goalkeeper Hector Flores for a 2-1 lead with 50:30 played.

“For us to be able to break them down on the counter, which we knew they would be susceptible to, and to finish on the run of play was huge. At that point, we felt like we would be able to see it out from there defensively,” Sauk Prairie coach Drew Kornish said.

“I felt the momentum, that it was in our favor, but when they scored on the counter I was like ‘Okay, we can get this back,’” Marse added.

With just under 40 minutes remaining, the Comets fought furiously for another equalizer. Baumgardt made a diving stop on a free header from senior Adrian Fonseca off a corner kick in the 79th minute before the Comets had a cross skitter through the 18-yard box in the 82nd.

As time wound down, Delavan-Darien made one final push and had cries of a penalty kick in the final minute. Colin raced after a through ball into the 18-yard box and was undercut by a sliding Baumgardt, but the officials ruled it was a clean save and the Eagles saw out the final seconds.

Baier gave the Eagles the lead in the 28th minute as he nudged a chipped cross from Drescher off a free kick over Flores and just over the goal line for a 1-0 lead.

The Comets finished with a 26-3 advantage in shots and 9-2 edge in corner kicks but couldn’t get over the hump.

“The second half was like night and day from the first half. Yes we possessed well, but our final third wasn’t there like it was in the second half,” Marse said. “That kind of stuff you can’t help and you just have to work through it. I think we did work through it, but just didn’t get the right outcome.”

Marse applauded the team’s effort given everything it dealt with throughout the season, and especially on Saturday alone. In a season where adversity faced everyone, including a bump up to Division 2 for the Comets, he knows they can keep their heads held high.

“I hope they remember the season and all the obstacles that happened every day with the pandemic; all the stuff we had to go through to even start practice,” he said.

“It’s great getting here and it feels really bad not bringing a trophy home, but they should be proud of themselves being here.”

A goal in the 14th minute was enough to propel second-seeded Hartland Arrowhead past third-seeded Elkhorn in a Division 1 state semifinal match in Mukwonago on Saturday.

Enzo Bova scored at 13:29 and Arrowhead held the Elks to just one shot on goal in what turned out to be a defensive slugfest.

It was Elkhorn’s first and only loss of the season as it finished 13-1 after winning its fourth straight Southern Lakes Conference title.

Arrowhead went on to lose 3-0 to Marquette University High in the state championship match Saturday night.