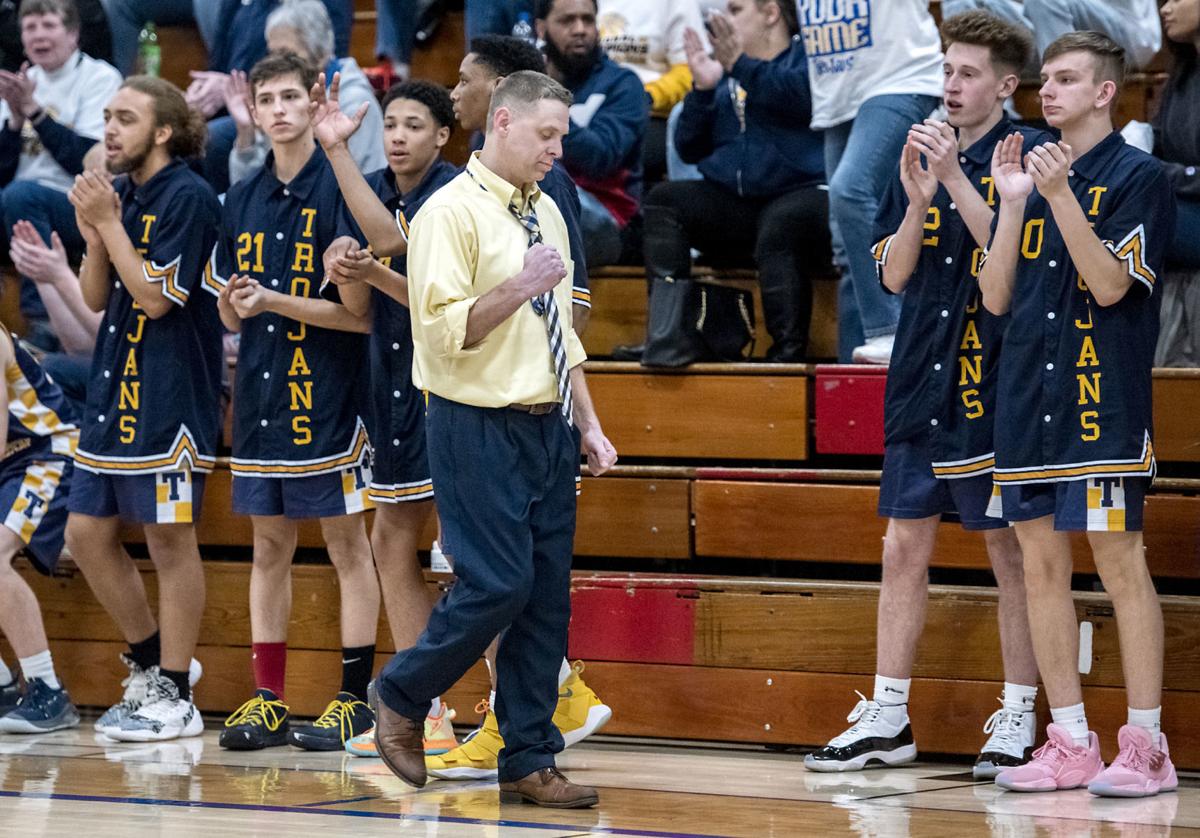 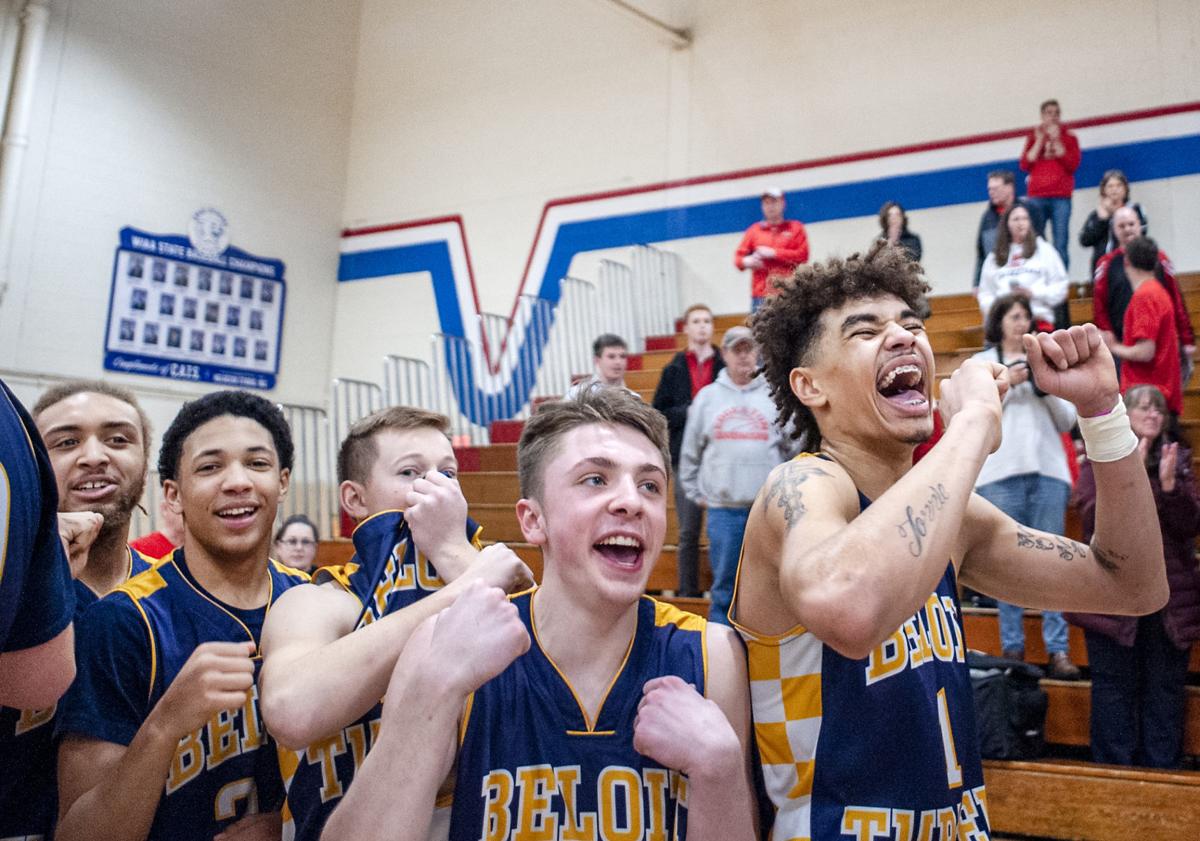 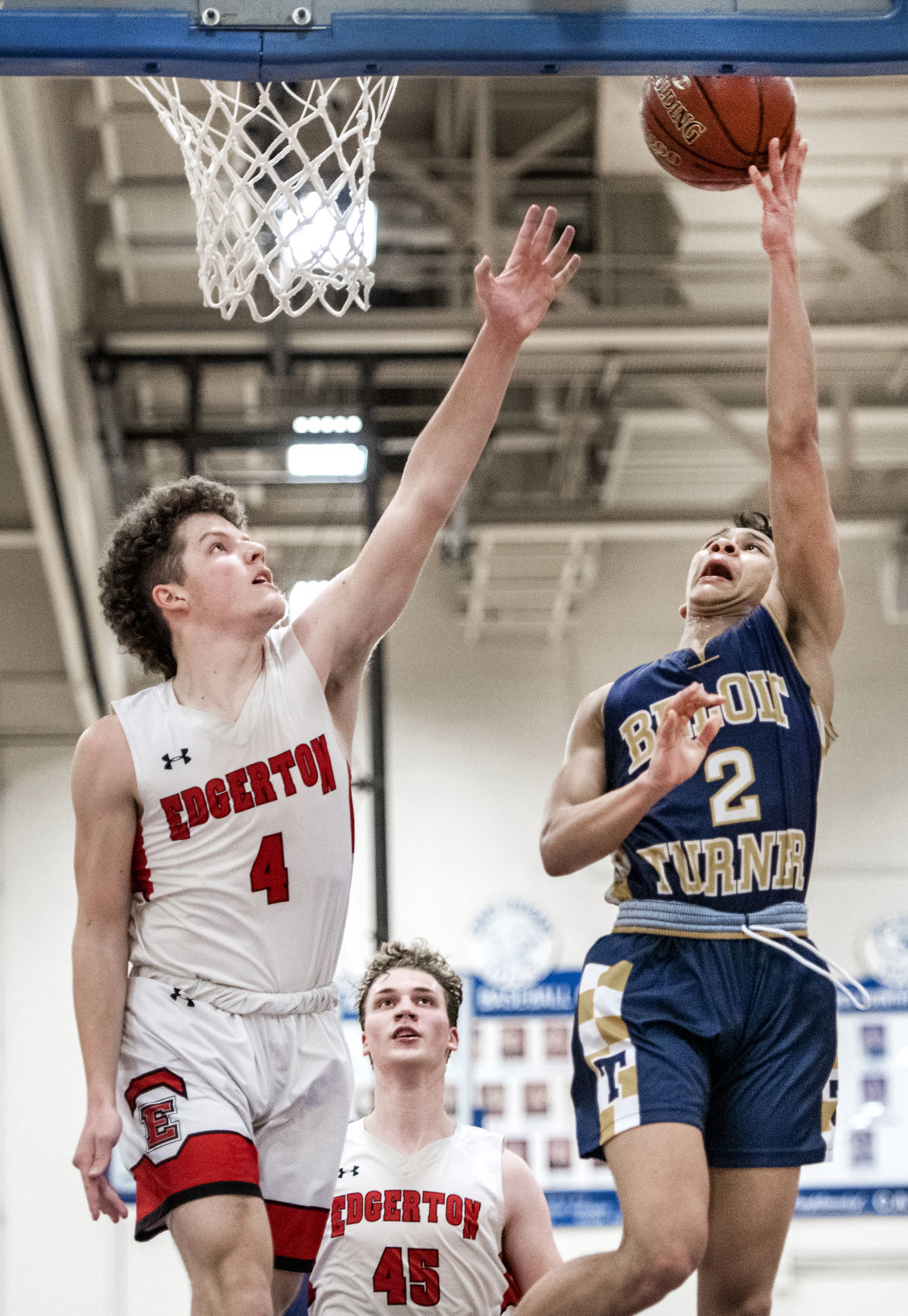 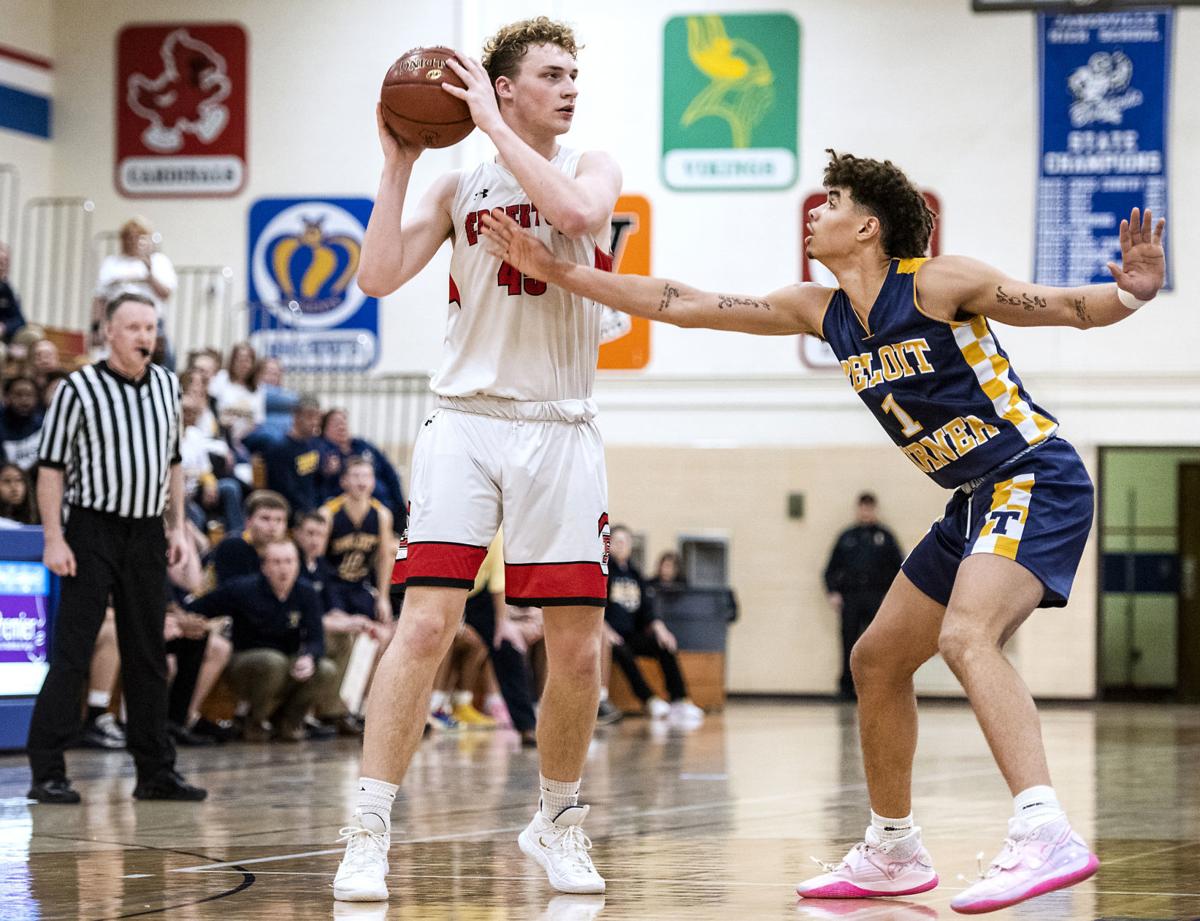 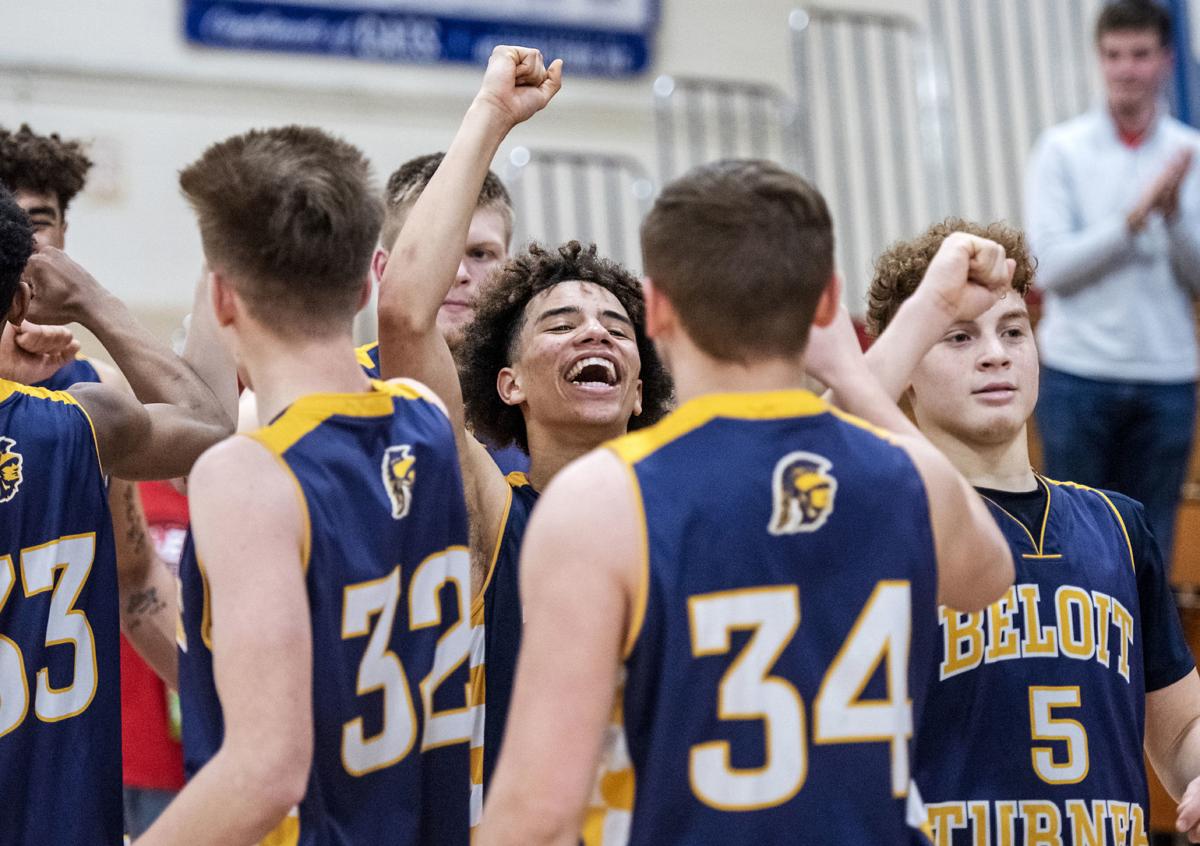 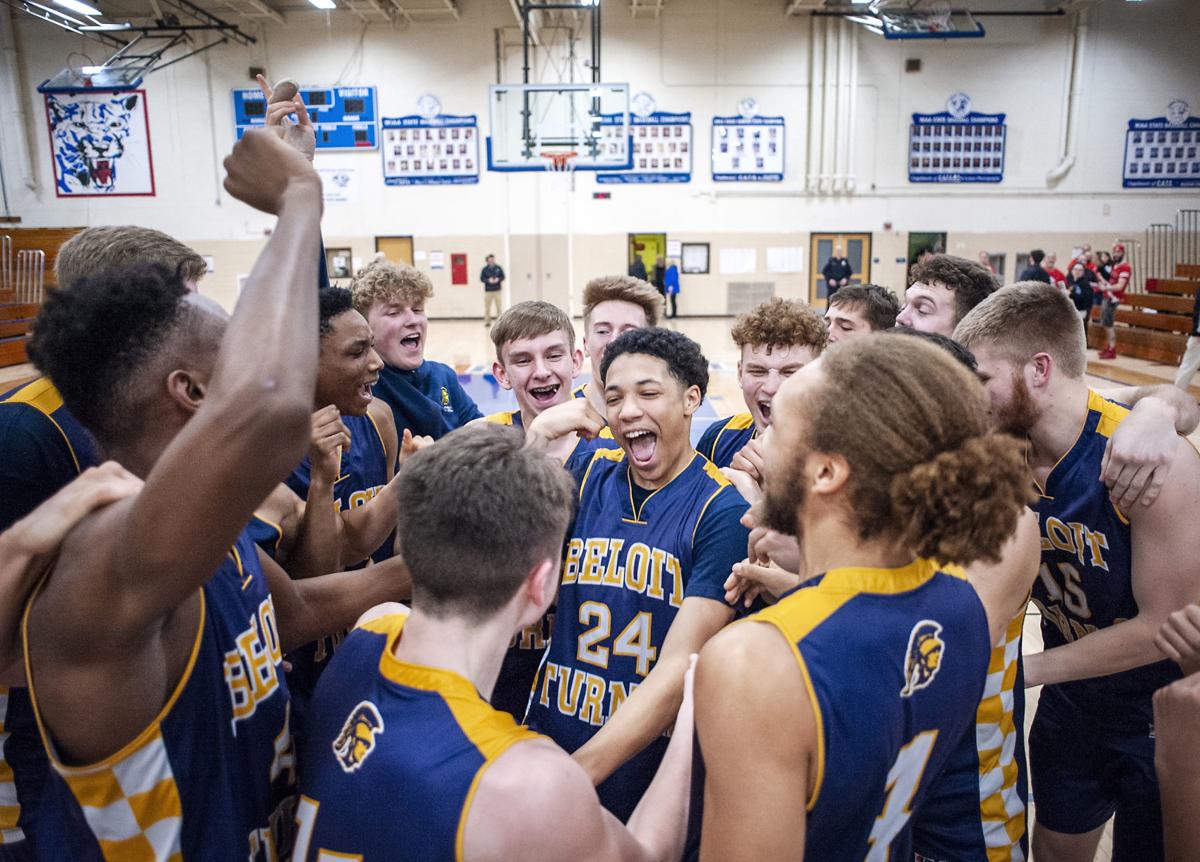 Beloit Turner's Eldgret Howard (24), center, celebrates with the rest of the team after the Trojans' victory against Edgerton in the Division 3 sectional semifinal game Thursday, March 12, 2020, at Craig High School. 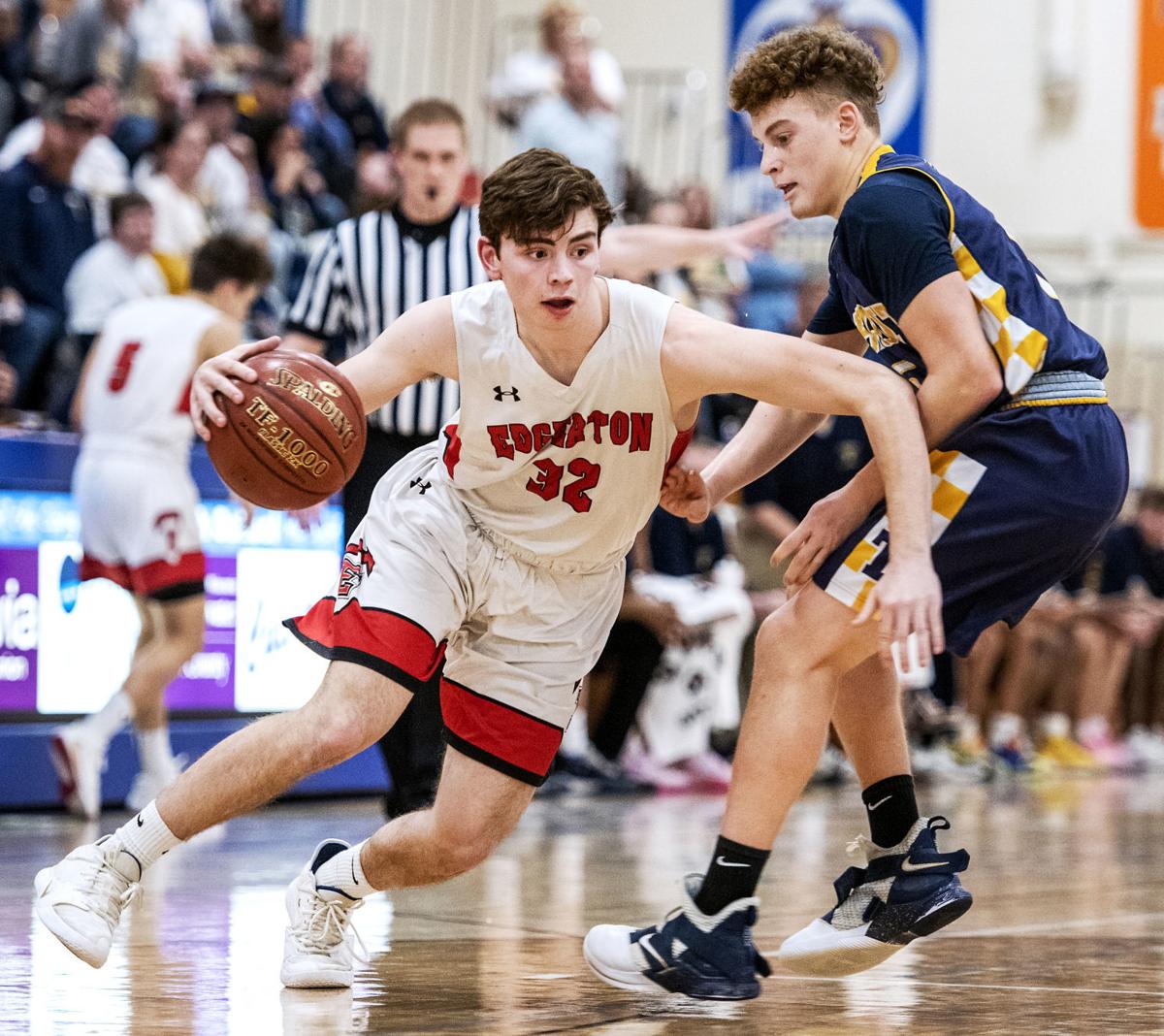 Beloit Turner's Eldgret Howard (24), center, celebrates with the rest of the team after the Trojans' victory against Edgerton in the Division 3 sectional semifinal game Thursday, March 12, 2020, at Craig High School.

The Beloit Turner boys basketball team had a grand total of four people in its student section Thursday night.

The Trojans made sure to put on a show anyway.

The victory was the second straight for the Trojans over the Crimson Tide in the sectional semifinals.

The prospect of playing in a sectional final Saturday night for a berth in the WIAA State Tournament was short-lived.

A couple of hours after the Trojans’ victory, the WIAA announced that the remainder of the boys tournament would be canceled due to the coronavirus outbreak.

The crowd, limited to 88 fans per side because of restrictions placed on the game by the WIAA due to the potential COVID-19 breakout, had plenty to cheer for in the second half, as Turner slowly pulled away from the Crimson Tide.

The WIAA Board of Control, which earlier Thursday announced the state tournament wouldn’t take place in the Kohl Center, sent out a press release late Thursday night announcing the cancellation.

Turner coach Ken Watkins, who was hoping to guide a Turner team to its first trip to state in school history, hoped his team would get that chance.

The Trojans got a last-second 3-pointer from Alden Tinder to beat the first-half buzzer and take a 35-30 lead over the Crimson Tide at halftime.

Jordan Majeed nailed a triple for three of his team-high 21 points to begin the second half, and the Trojans never led by fewer than six points the rest of the way.

David Heldt again provided the team with a spark with 12 points off the bench, while Dai‘Vontrelle Strong had 11 and Dylan Hoppe finished with eight.

Turner held a 50-38 lead when Danny Burrows nailed a 3-pointer that seemed to break the backs of the Crimson Tide with 6:45 to play.

Trojans point guard DJ Wash said the key to Turner’s second-half surge was its work on the defensive end.

“At halftime we talked a lot about picking up the energy on the defensive end,” Wash said. “And in the second half, that’s what we were able to do. Their big guy (Nick Spang, 25 points) was going to get his, but we didn’t want them to beat us by shooting 3s.”

Tide junior Drew Hanson made three of his four 3-pointers in the first half on his way to 16 points. No other Edgerton player made a 3, with the rest of the team going 0 for 10 from beyond the arc.

Edgerton coach Daryl Fox said all credit must be given to Turner.

“On a night like this, you’ve just got to tip your cap to them,” Fox said. “They just came out and hit some really tough shots. And their defense has given us real trouble all three games we’ve played them, and that was certainly the case tonight.”

The Crimson Tide finished their season with a 20-5 record, while Turner looks toward an unsure future with a 21-4 mark.