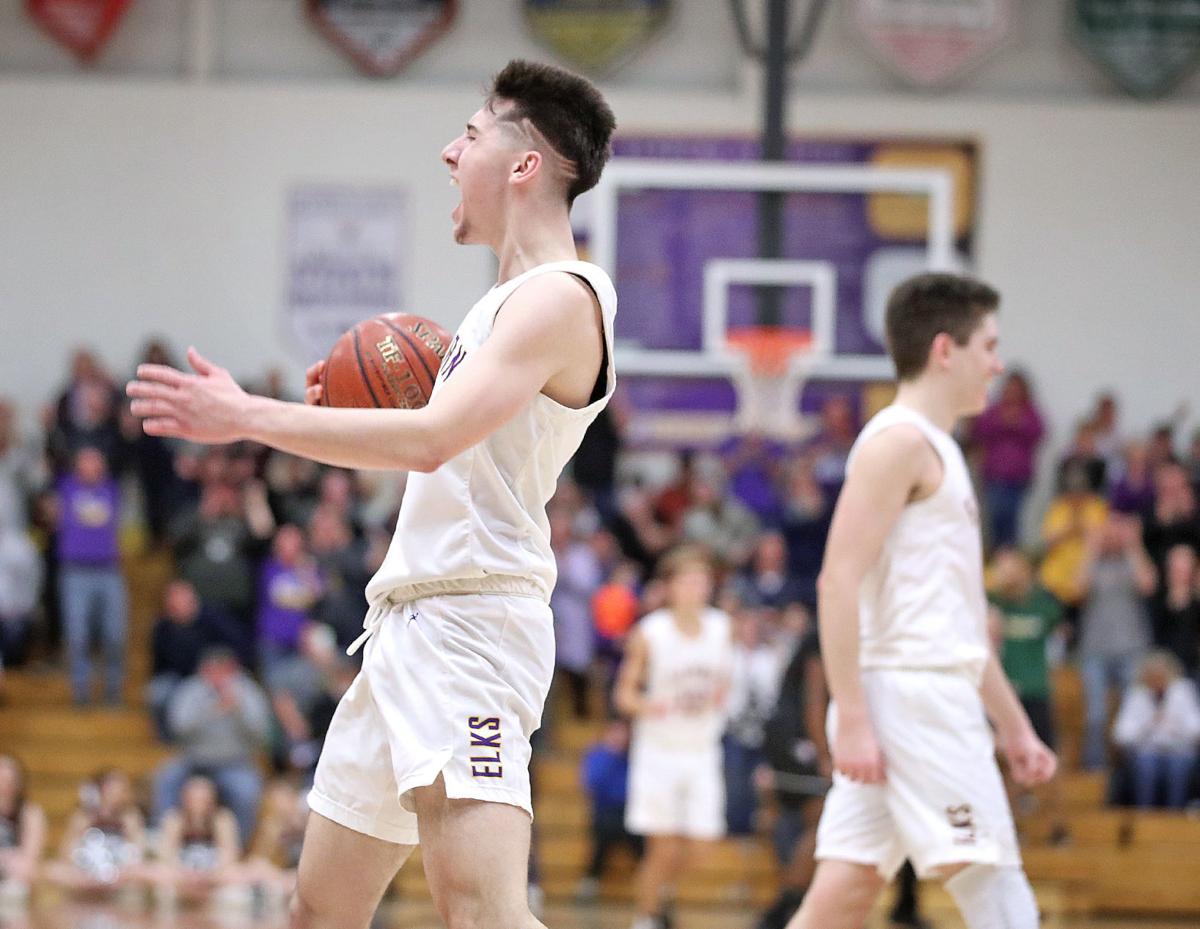 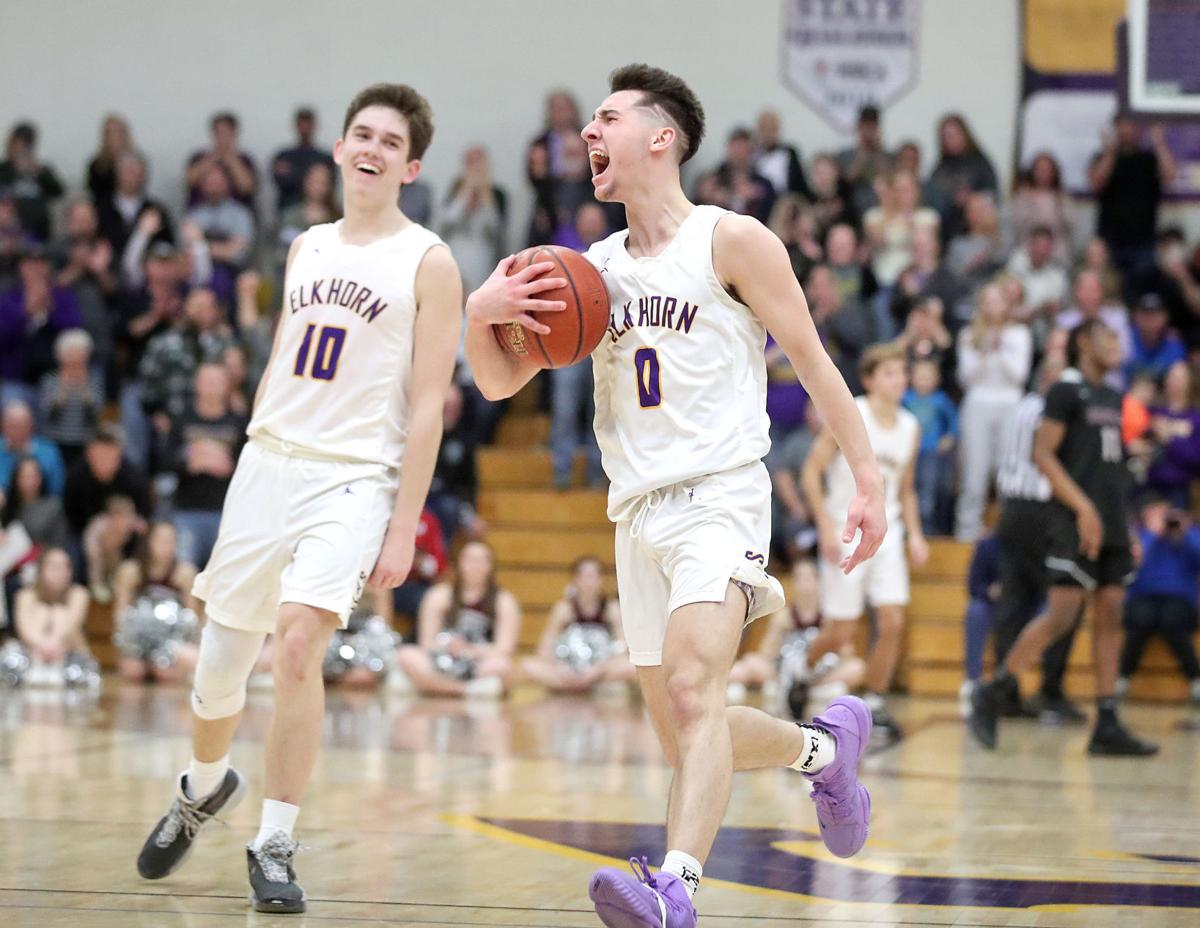 Elkhorn’s Jordan Johnson (0) and Erik Van Dyke (10) celebrate as the final seconds run out in their 61-52 victory over Westosha Central in their WIAA Division 2 regional final game. Johnson finished with 28 points. 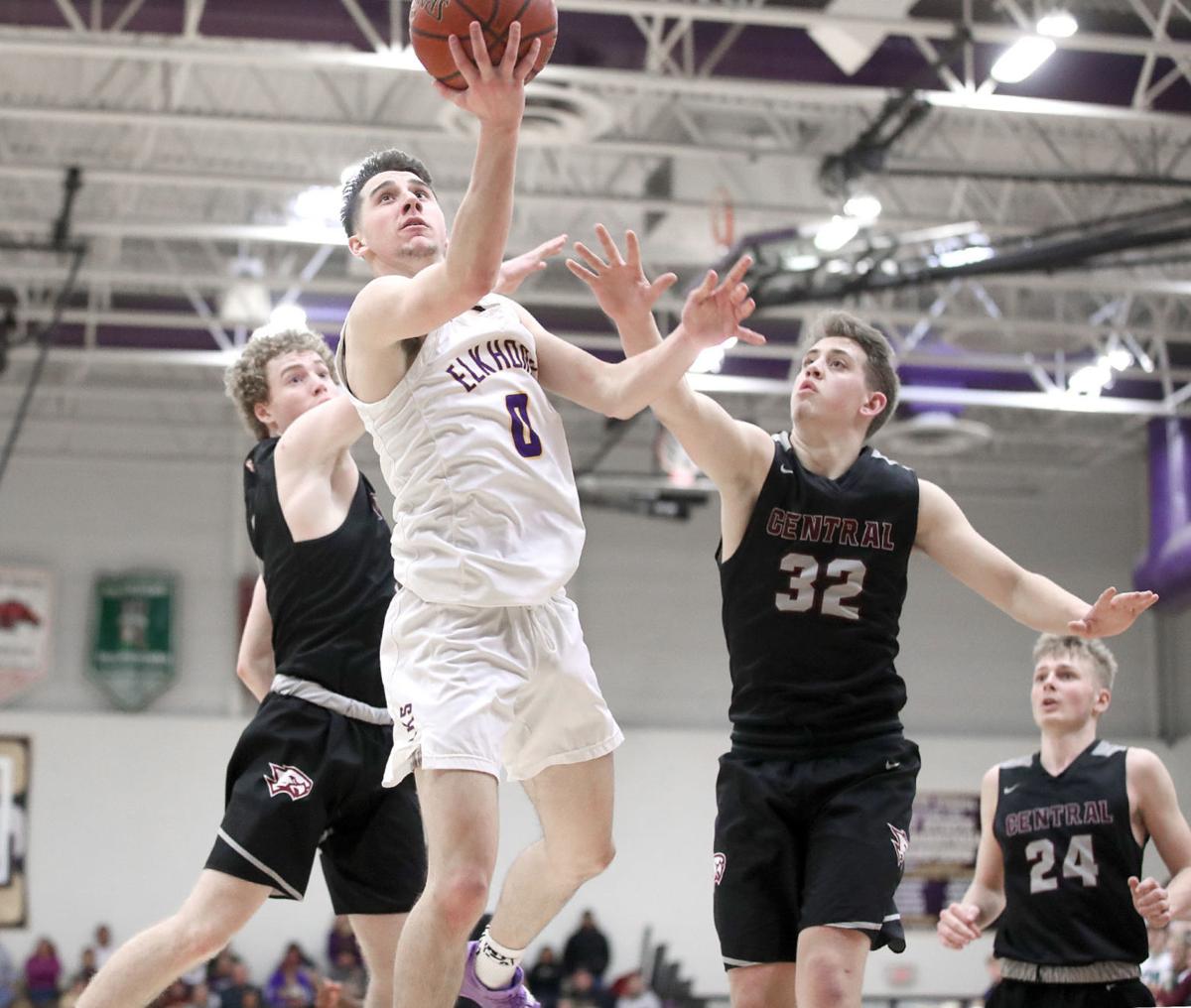 Elkhorn's Jordan Johnson splits two defenders for the layup during their WIAA Division 2 regional final game against Westosha Central on Saturday in Elkhorn. Johnson finished with 28 points to help the Elks win 61-52.

Elkhorn’s Jordan Johnson (0) and Erik Van Dyke (10) celebrate as the final seconds run out in their 61-52 victory over Westosha Central in their WIAA Division 2 regional final game. Johnson finished with 28 points.

Elkhorn's Jordan Johnson splits two defenders for the layup during their WIAA Division 2 regional final game against Westosha Central on Saturday in Elkhorn. Johnson finished with 28 points to help the Elks win 61-52.

As a sophomore, he averaged 5.6 points a game for an Elks team that advanced to the WIAA state tournament for the first time since 1987.

This past season, the junior outperformed all others in a leading role.

The 6-foot-1 point guard started the season on a scoring binge and never let up. He led the Southern Lakes Conference in scoring at 24 points per game en route to earning first-team all-state honors in Division 2 by the WBCA and honorable mention all-state by the Associated Press. He helped lead Elkhorn to a share of the Southern Lakes title and was named the conference’s player of the year.

Johnson was an easy choice as The Gazette’s area boys basketball player of the year, leading a group of seven on the all-area team.

“Jordan is one of the most explosive scorers I have seen in quite some time,” Elkhorn coach Josh Skatrud said. “He had some stretches in games where he was nearly impossible to guard and made shots that seemed impossible.

“His improvement was a major key to our success this year.”

With Johnson running point, the Elks finished 21-4. They advanced to a Division 2 sectional title game but saw a chance for a second consecutive state tournament berth derailed by the coronavirus pandemic.

Johnson tried to put the disappointing abrupt end to the season in perspective.

“I didn’t find out we weren’t going to play on Saturday until Friday morning,” Johnson said. “Most of my teammates knew Thursday night, but Nick (Brown) texted me in the morning and said the season was over.

“It was tough for all of us once coach got us together, but we also realized what a great season we had and that no one could take that away from us. And we all realized that what’s going on now is much bigger than playing basketball.”

Johnson played in all 26 games during the 2018-19 season, but with a senior-laden team, especially at the guard position, his minutes were limited.

He worked hard on his game over the summer, traveling around the midwest playing for Wisconsin Swing.

Janesville Parker boys basketball coach Matt Bredesen is the coach of the Swing team that Johnson plays on and said he was not surprised by his breakout season.

“I’ve had the privilege to coach Jordan in AAU for three years, and he is one of the most offensively gifted players I’ve had the opportunity to coach in 20 years of high school basketball and 11 years of high level AAU,” Bredesen said. “He can finish in so many different ways around the rim and shoots the ball very well.

Johnson’s scoring numbers this season were staggering. He scored 28 points in two of the Elks’ first three games and averaged 25 points over the first four conference games. He had 33 or more points in five games, including a 44-point outburst in a nonconference win over Racine Park. And he scored in double figures in all 24 games.

One of the areas Johnson worked hardest on in the offseason, he said, was his 3-point shooting. He shot better than 50% from beyond the arc this season, making 63 of 121 attempts. He made six of seven 3s in the 44-point game against Racine Park and had seven games with four or more 3s.

“It’s funny because I think it was easier scoring in high school than it was on my AAU team,” Johnson said. “My AAU team had seven or eight guys on it that could score points when they wanted.

“In high school, we had a very unselfish team and no one really cared who scored or how much, as long as we won. I never knew and never wanted to know how many points I had. All I cared about was winning and being around my teammates.”

Johnson knows that as the college offers continue to pour in, he needs to elevate his game even more. That means continuously working on all aspects of it.

But Bredesen believes Johnson is the real deal.

“I know he has goals as far as where he wants to play in college,” Bredesen said. “I have no doubt he will succeed, just hoping that he has that opportunity, once COVID-19 has passed, to play in front of some coaches this summer so they have the chance to see all the intangibles and skills he can bring at that next level.”

Led by player of the year Jordan Johnson of Elkhorn Area, the Gazette's all-area boys basketball team is loaded with underclassmen.