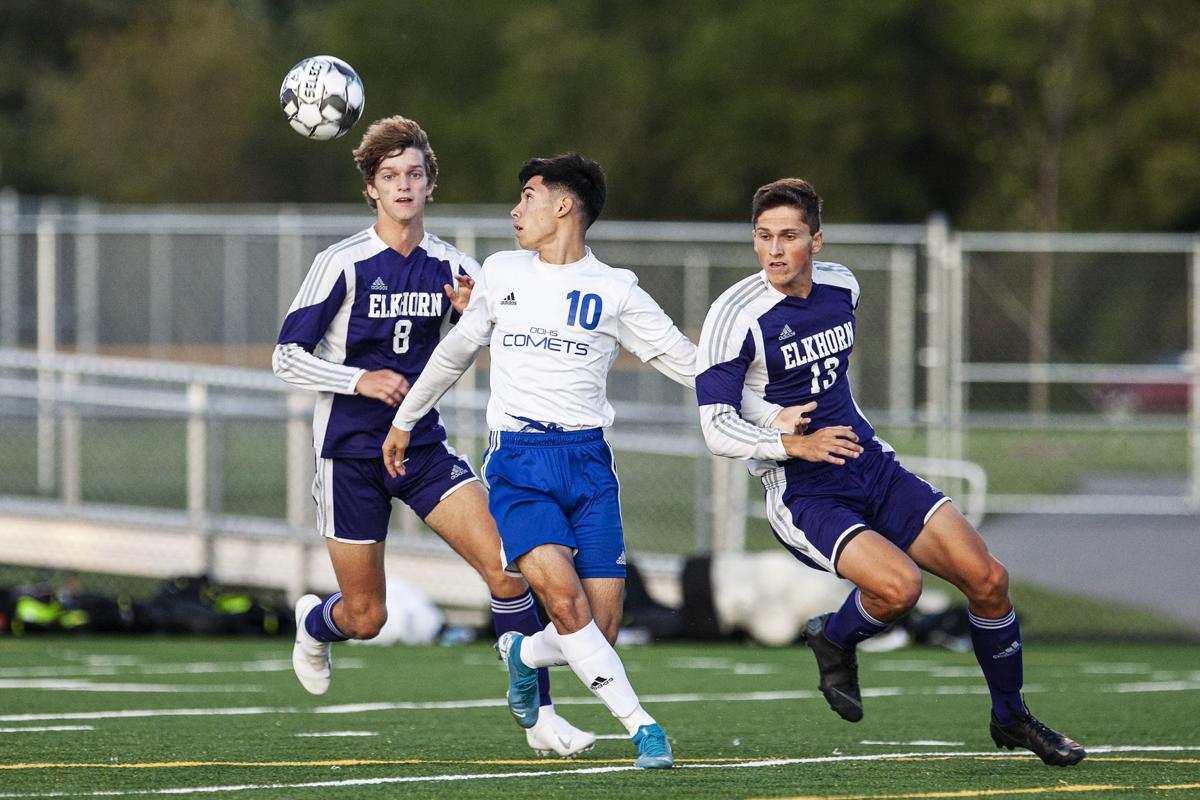 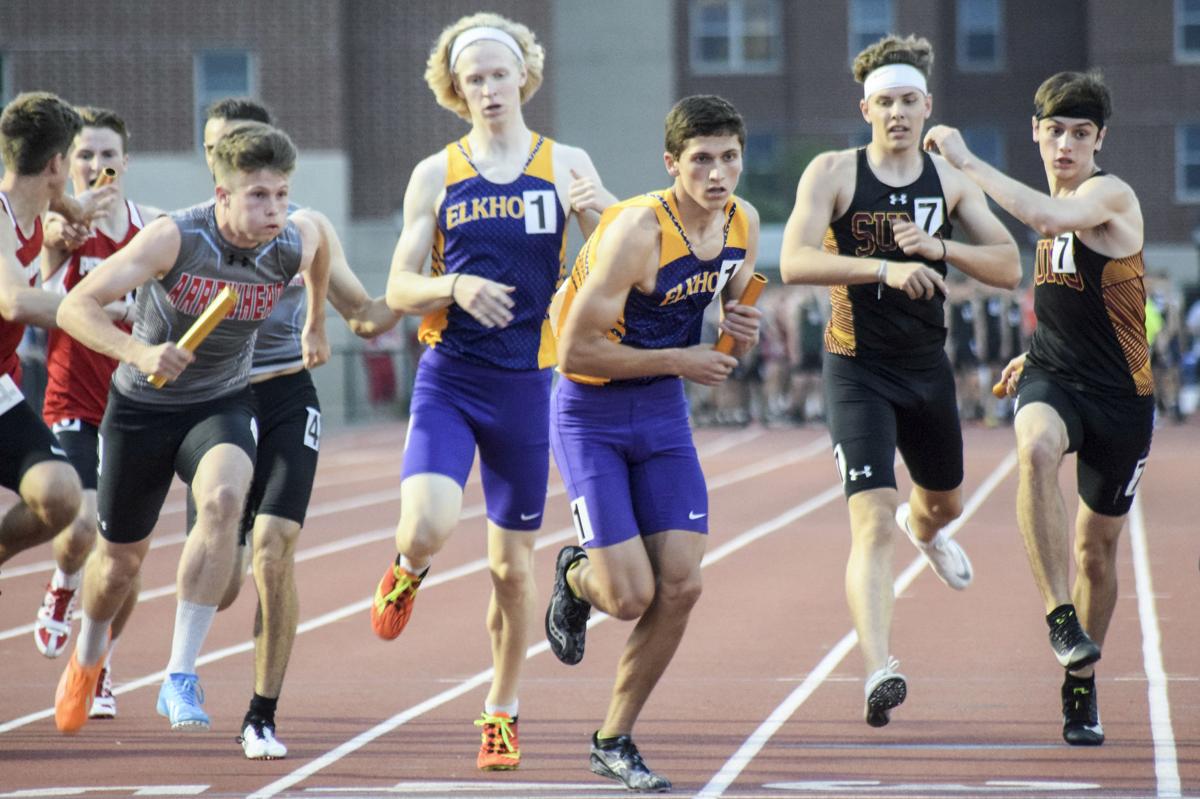 Elkhorn junior Devon Davey takes a handoff from junior Lucas Koepke before taking off on the anchor leg of the Division 1 boys 1,600-meter relay on Day 1 of the WIAA state track and field meet at Veterans Memorial Field Sports Complex at UW-La Crosse. 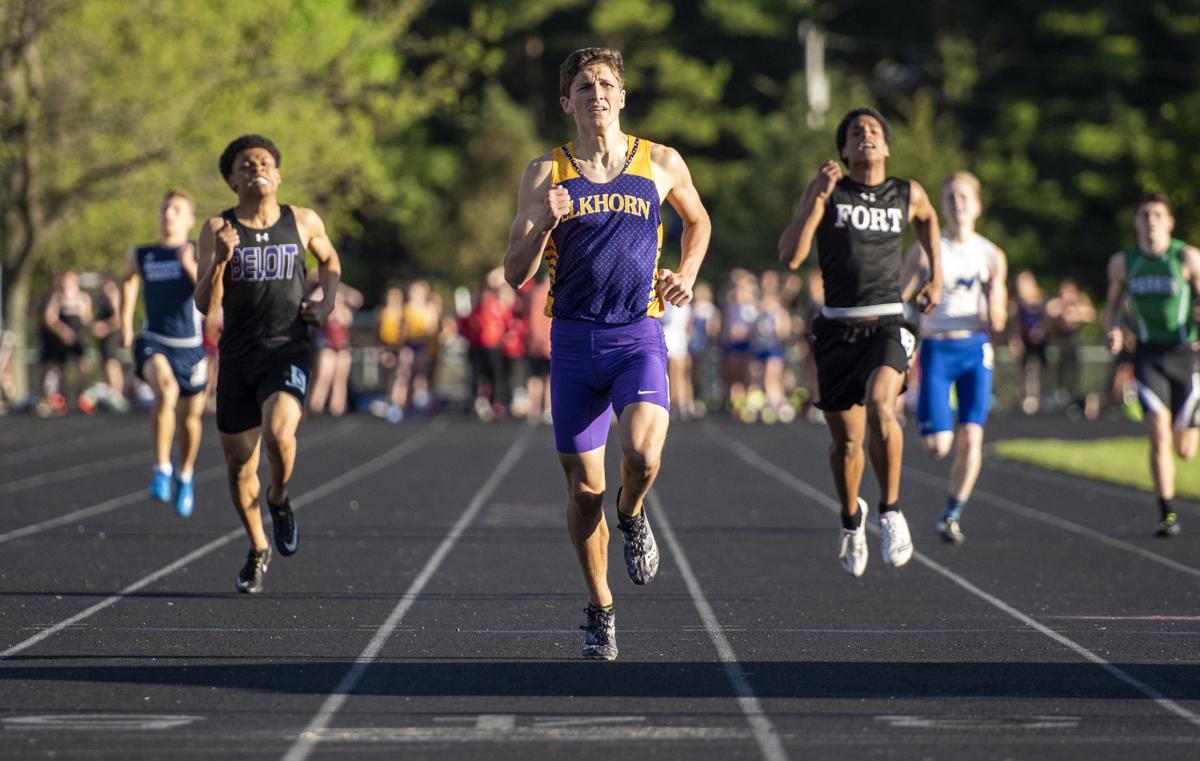 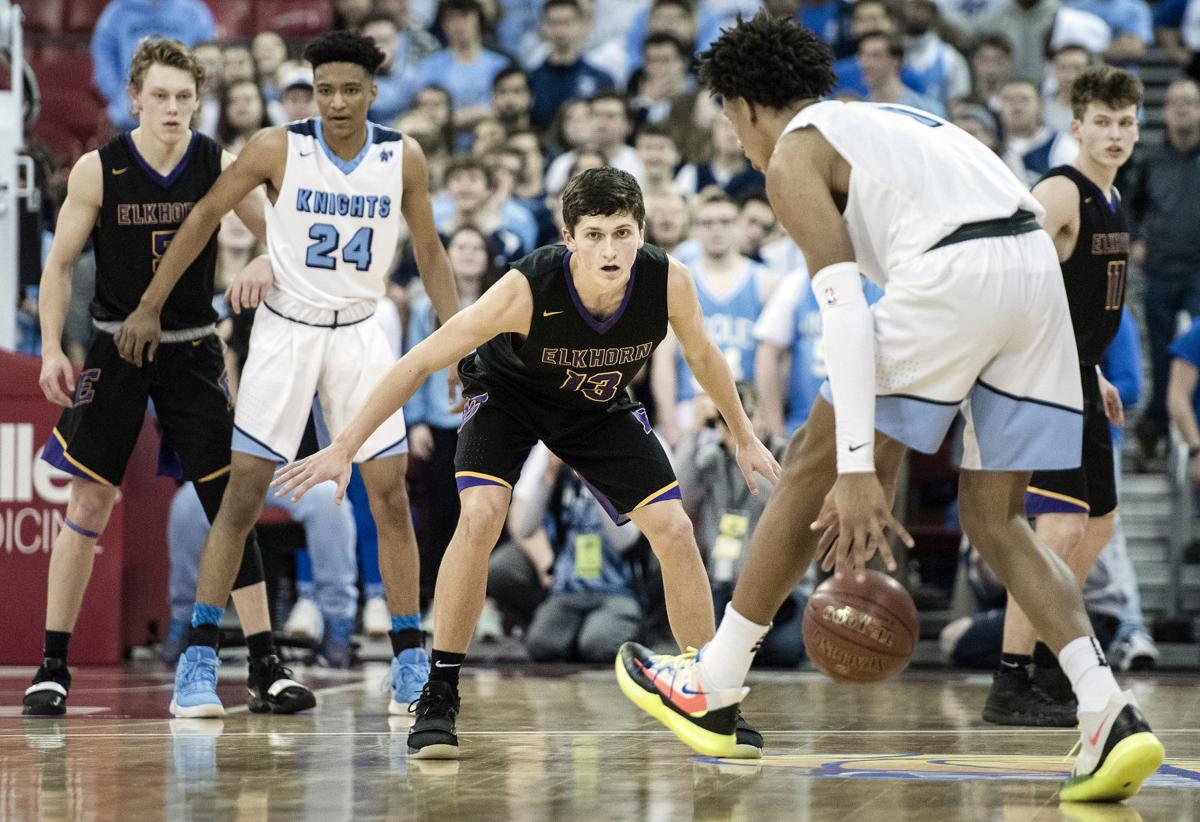 Elkhorn's Devon Davey (13), center, crouches down to defend against Nicolet's Jalen Johnson (1), right, on Friday, March 15, 2019, at the Kohl Center in Madison. 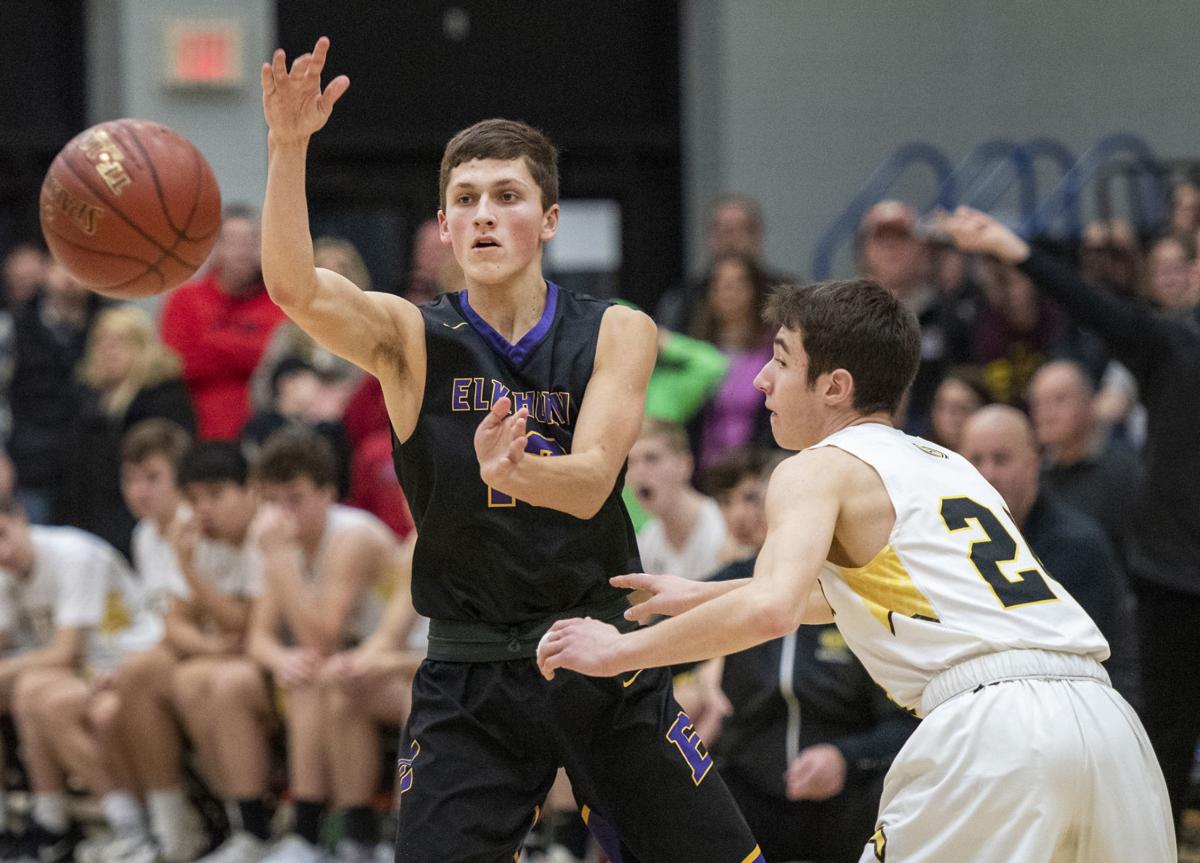 Elkhorn junior Devon Davey takes a handoff from junior Lucas Koepke before taking off on the anchor leg of the Division 1 boys 1,600-meter relay on Day 1 of the WIAA state track and field meet at Veterans Memorial Field Sports Complex at UW-La Crosse.

When you ask Davey about his impressive, and still-growing, list of high school sport accomplishments, his answers are neither long-winded nor loud or boastful. He tells you of the athleticism, drive and competitive spirit passed down from his parents, Dodd and Kathy, to he and his two brothers, Derek and Drew.

Other than that, he pretty much lets his record do the talking. Davey has been a part of two teams that qualified for the WIAA boys soccer state tournament, one boys basketball team that ended a lengthy state tournament drought for the Elks and has reached the state track and field meet four times.

And he still has two sports seasons left before he graduates.

“We have a Hall of Fame at the school, and the running joke with him is, ‘You know, when you graduate, they’re just going to put you in there,’” Elkhorn soccer coach BZ Kayser said. “Because there’s no one in school history, no one, that has that resume over four years and three different sports.

Soccer is the sport where Davey can most flash his versatility.

He led the Elks with 21 goals this season, including seven multi-goal games. But when Elkhorn played against its toughest opponents, Davey shifted to the back of the formation, often man-marking and shutting down some of the top offensive threats in the state.

“It depends on the matchup. I can stay back and man-mark or move up and try to go score,” Davey said. “I’d probably say I like man-marking the best. That’s a lot of fun.”

It does not seem like a whole lot of fun for his opponents.

Delavan-Darien’s Estevan Colin led the state with 53 goals, according to statistics compiled on WisSports.net, but Davey and Elks shut the Comets out both times they met this season.

“Devon just locks them up, and you can tell they’re getting mad when they start getting all pushy and angry,” Elkhorn senior Alec Birbaum said. “It’s really nice having him on the team, whether we have him on defense or put him up top and let him run. He’s just an athlete.”

The Elks also avenged last year’s sectional final shootout loss against Oregon, beating all-state senior Collin Bjerke and the Panthers 2-0 to help the program reach the state tournament for the third time—and second in Davey’s career. He was a freshman starter on the 2016 team that finished as state runner-up to nationally ranked Whitefish Bay.

“He never complains and does whatever job you ask him to do,” Kayser said.

Davey showed off his propensity to be a lock-down defender on the basketball court, as well.

Last season, Davey averaged 6.6 points and 3.8 assists per game. But his biggest impact was felt on the defensive end.

“He can do so many things,” Elkhorn boys basketball coach Josh Skatrud said. “We always put him on the other teams’ best player and then we never had to worry about it. It’s such a luxury when it’s like, yeah, they have a really good guy, but we know he’s not going to kill us because Devon’s on him.

“His versatility is unbelievable.”

Davey played a critical role for a team that advanced to the state tournament for just the fifth time and first since 1987.

Then he got to prove his fearlessness when he was tasked with guarding Glendale Nicolet’s Jalen Johnson, the state’s top basketball prospect who has since committed to play for Duke.

Johnson had a nine-inch height advantage and eventually finished with 16 points and 11 rebounds in a Division 2 state semifinal game. But Davey helped force him to go just 6-for-17 shooting from the floor and 0-for-2 from beyond the arc.

“He’s such a smooth athlete. He doesn’t look like he’s going that fast,” Skatrud said. “You watch NBA guys, they move so quickly over such a wide amount of space that they don’t look like they’re moving but cover so much ground. That’s Devon.”

And as if further proof was needed to Davey’s speed, a quick stop at the track during the spring season takes care of that.

He qualified for the WIAA state meet in La Crosse for the first time as a sophomore. He and his brother, Derek, who is now a track and field athlete at Brown University, qualified together in the Division 1 400-meter dash.

Last year, Devon Davey went to state in three separate events. He medaled in the 400 with a fifth-place finish (49.38 seconds in the finals). And he was ninth in the 200 (22.26) and helped Elkhorn’s 4x400-meter relay team win a preliminary heat to reach the finals, where it took eighth.

“They (sports) are all fun, but track is probably my favorite,” Davey said, adding that he is narrowing down his college choices but will probably run at the collegiate level.

Until then, Davey has two more high school seasons to continue tormenting opposing scorers and adding to his impressive three-sport resume.