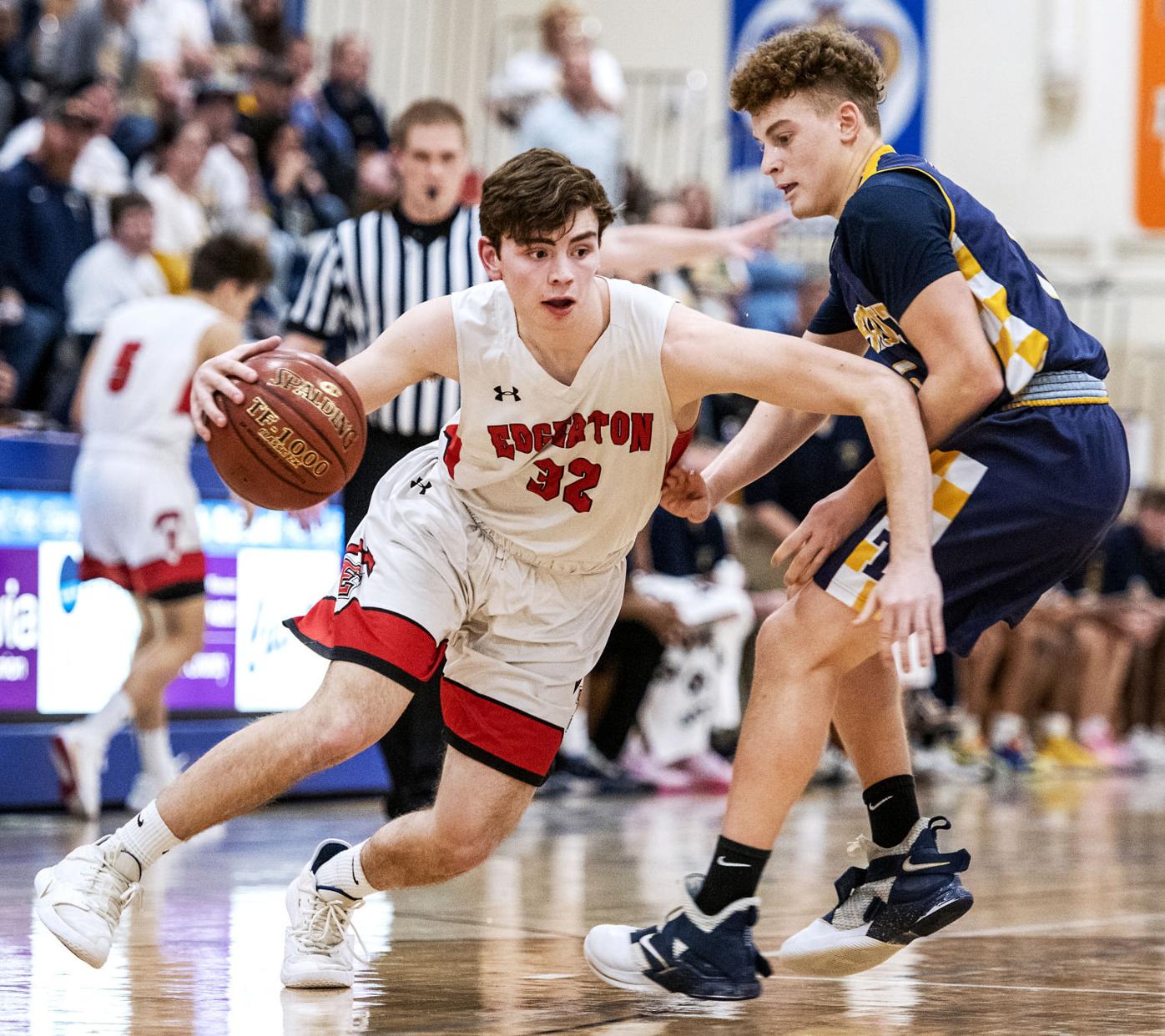 Edgerton's Peyton Fox (32), left, runs past Beloit Turner's Daniel Burrows (5), right, during their WIAA sectional game last March. Fans and media members are still not allowed at Rock Valley Conference games, but for the first time since last season, the RVC has all 10 of its programs playing basketball after McFarland recently joined the fray. 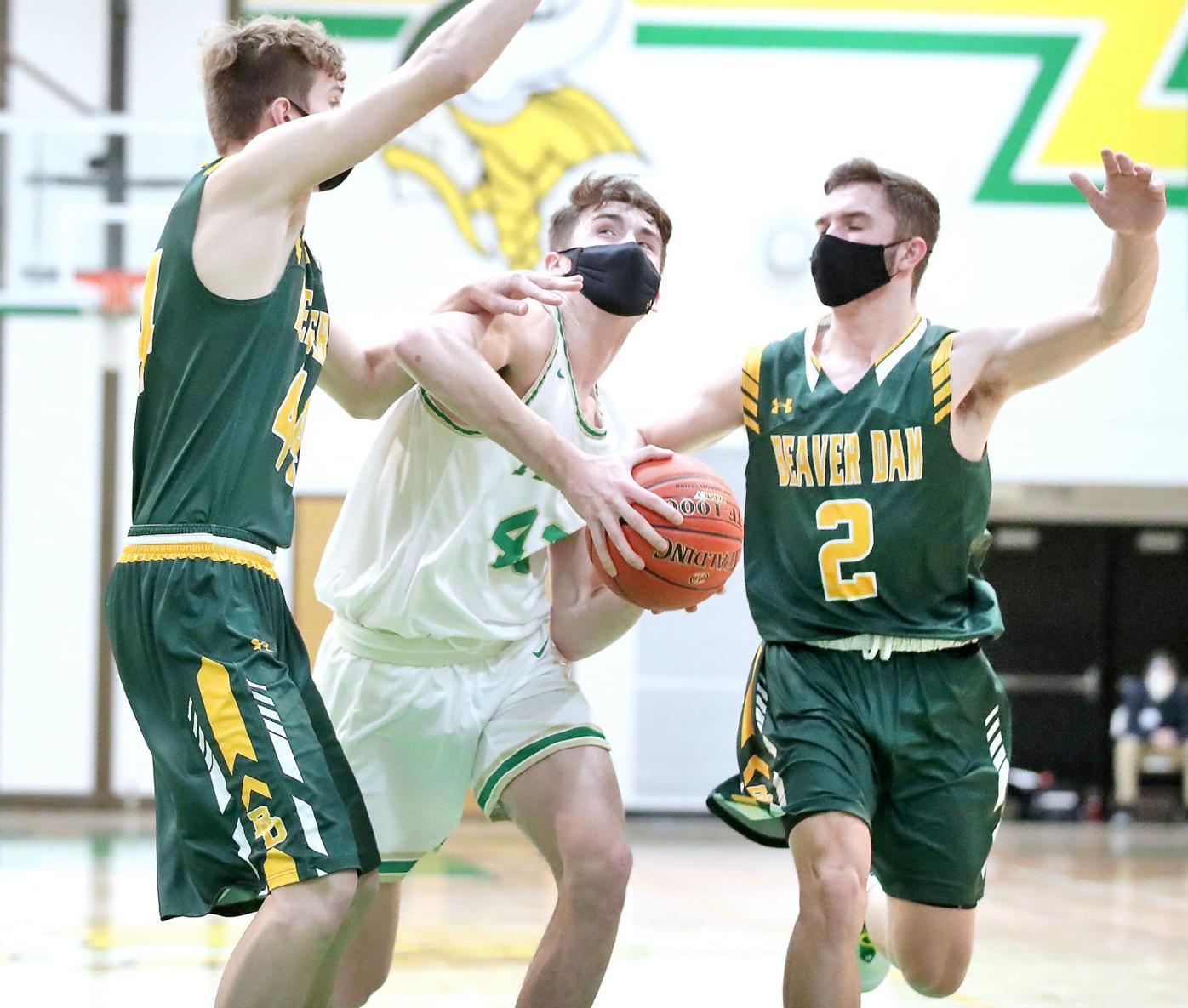 Janesville Parker’s Brenden Weis tries for the layup between two Beaver Dam defenders in the first half game in Janesville on Tuesday.

Edgerton's Peyton Fox (32), left, runs past Beloit Turner's Daniel Burrows (5), right, during their WIAA sectional game last March. Fans and media members are still not allowed at Rock Valley Conference games, but for the first time since last season, the RVC has all 10 of its programs playing basketball after McFarland recently joined the fray.

Janesville Parker’s Brenden Weis tries for the layup between two Beaver Dam defenders in the first half game in Janesville on Tuesday.

For the first time since last March, basketball is back in full force in the Rock Valley Conference.

McFarland’s debut last week in both boys and girls basketball meant all 10 conference schools were back on the hardwood.

Located in Dane County, McFarland finally got approval in late December to begin its boys and girls seasons on Jan. 7 but with strict COVID guidelines by which to abide. The Spartans are not allowed to play home games because of county regulations and must practice in pods of four—which is similar to what Janesville Craig and Janesville Parker have been forced to do since they began practicing in November.

“It’s better than the alternative, and that’s to not be playing at all,” Vance said. “There will certainly be some COVID-related issues going forward, but it’s a chance for all our student-athletes to get out and compete.”

Vance said the Rock Valley will not crown a boys or girls conference champion this year because there is no possible way to play each team twice with McFarland six or seven games behind the rest of the league. Vance did say, however, that an all-conference team will be selected for both boys and girls.

“McFarland is probably only going to be able to play maybe 12-14 games total,” Vance said. “And with the other schools already putting together a nonconference schedule, it didn’t make any sense to go and change that. We want schools to get in as many games as possible.”

Vance said scheduling games has not caused as much of a headache as finding officials. He said 30 area officials have opted out of the 2020-21 basketball season, making it difficult to find refs, especially on short notice.

As I mentioned in this column last week, area official Scott Huffman worked a Madison Edgewood vs. Janesville Craig boys game last Tuesday that was technically his fourth scheduled game of the day. His first three assignments were either canceled or postponed to a later date due to COVID-19 concerns.

As of right now, Rock Valley schools are not allowing fans at games. Vance is hoping that changes and that home teams will be allowed two fans per player. A vote on that is scheduled for today.

In the meantime, Vance said access to games via online livestreams has worked out well.

“You think of a player’s grandma and grandpa that might be in Florida for the winter, and now they can watch a game live,” Vance said. “That’s one luxury we’ve never had before, and I think you’re going to see even more of that down the road for all sports.”

Rock Valley basketball is back in full force. And if you don’t get a chance to see games in person, you can still catch all the live-game action through streams that are linked nightly on rockvalleyconference.org. I can attest that there are a number of quality teams and players in the Rock this season.

Janesville Parker (10-4) at Monroe (4-0), boys, nonconference, 7:15 p.m., Saturday, Monroe High School--The Cheesemakers look for the season sweep after defeating the Vikings 59-52 in their first game of the season.

Monroe cracked the top 10 in the most recent wissports.com state coaches poll and is now ranked seventh in the state in Division 2.

Cade Meyer is the catalyst for the Cheesemakers’ high-powered offense. The UW-Green Bay recruit, who is coming off a 26-point performance in a win over Milton on Tuesday, is averaging 21 points a game.

Carson Leuzinger (14.8) and J.T. Seagreaves (12.2) are also averaging in double figures in scoring for Monroe.

Parker is coming off its biggest win in years. The Vikings upset sixth-ranked and previously unbeaten Beaver Dam on Tuesday thanks to a 47-point second half.

Brenden Weis leads three Vikings, averaging in double figures at 16.3 points a game. Robert DeLong is right behind at 16.0, and Jacob Naber chips in 10.5.