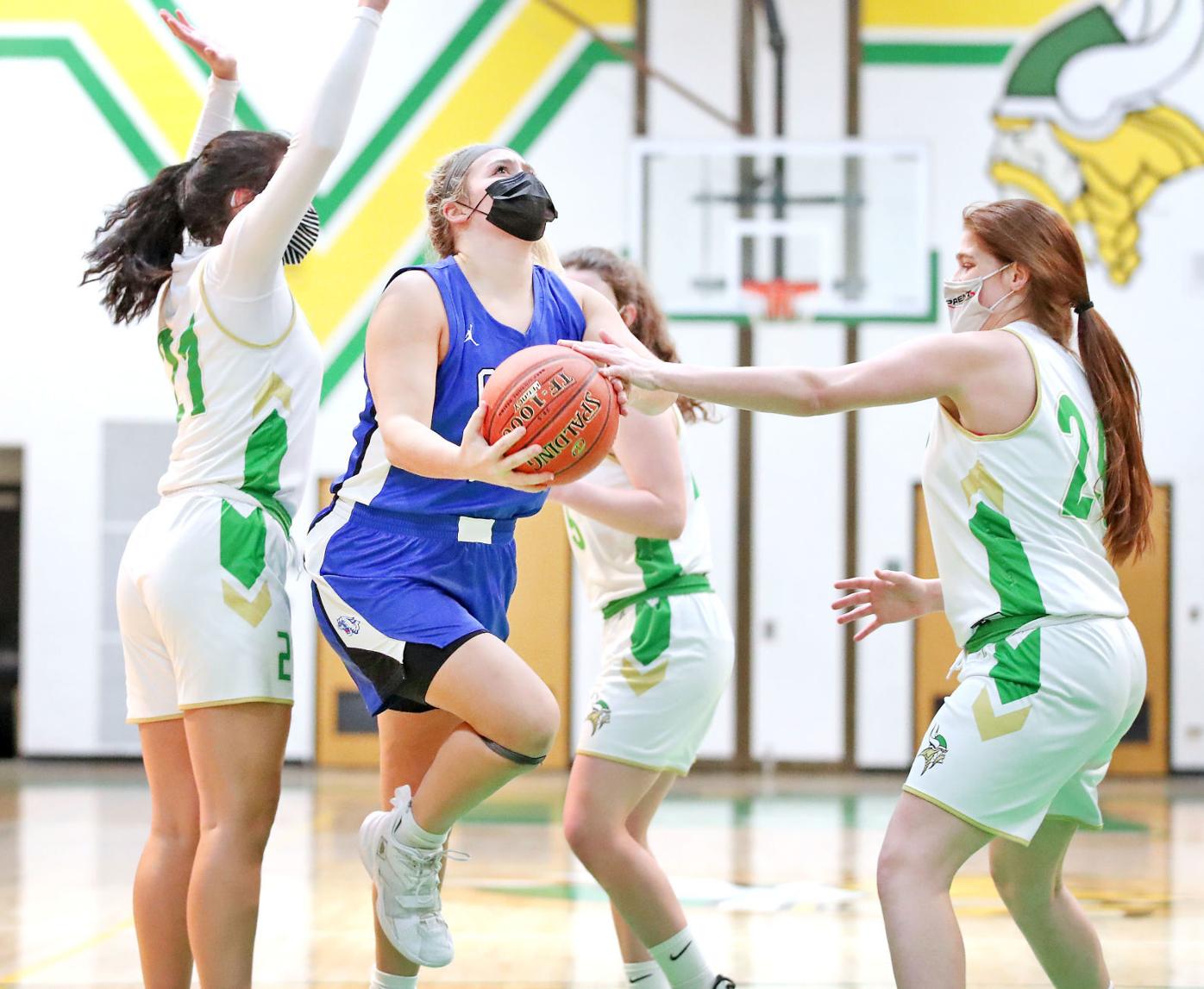 Janesville Craig’s Claudia Fieiras has her scoop shot blocked by Parker’s Mea Green during a game Dec. 12. Both teams were forced to pause their seasons a few days later due to COVID-19. The teams returned to practice earlier this week. 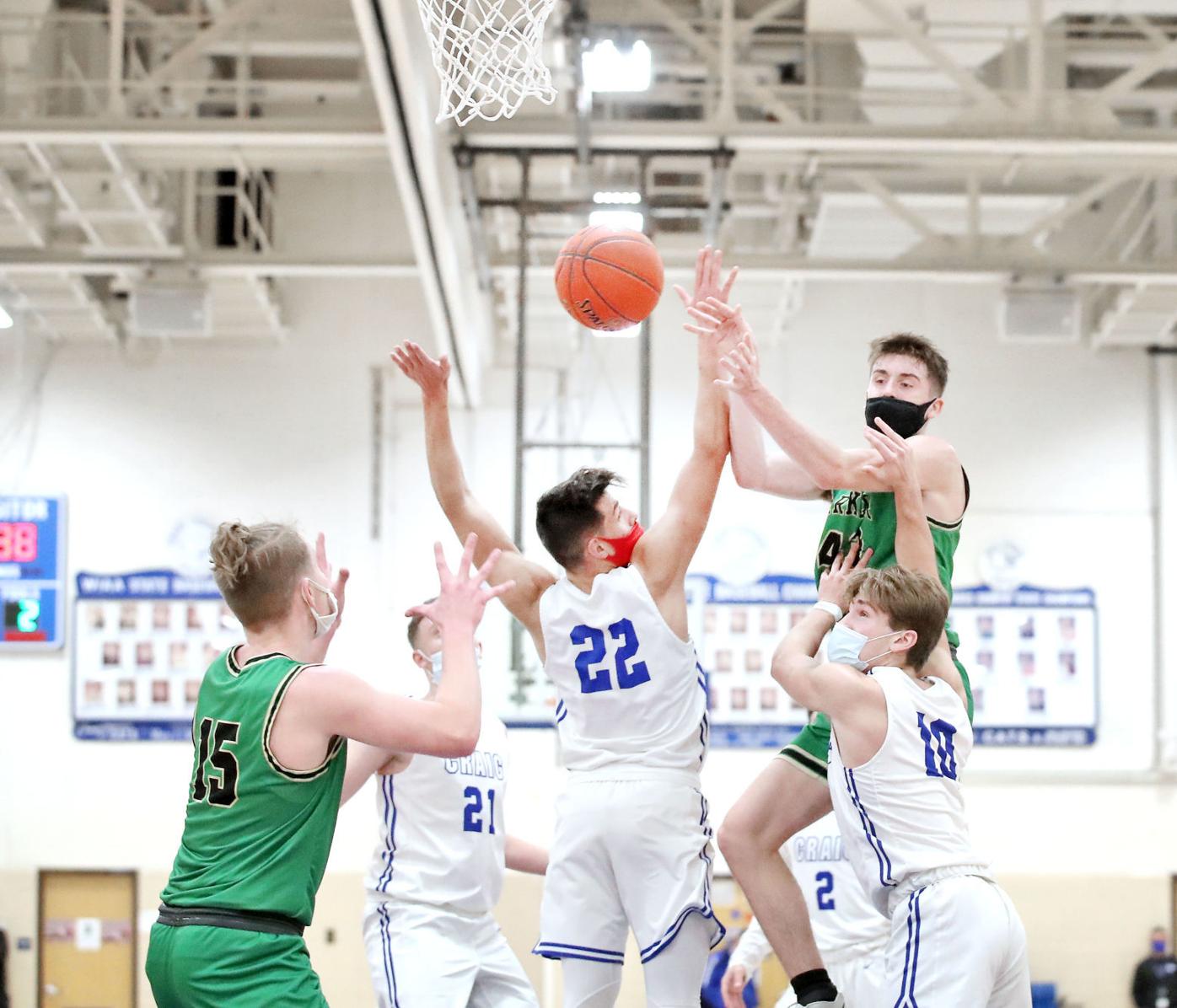 Janesville Craig’s Claudia Fieiras has her scoop shot blocked by Parker’s Mea Green during a game Dec. 12. Both teams were forced to pause their seasons a few days later due to COVID-19. The teams returned to practice earlier this week.

This figured to be a season like no other due to the fluidity of the coronavirus pandemic. The domino effect it had on wiping out the 2020 spring high school sports season carried over to the 2021 fall season in which many school districts opted out of participating.

The winter season brought a new sense of excitement for hundreds of area student-athletes that had sat idle since COVID-19 first reared its ugly head back in March. Basketball was one of five winter sports that got the go-ahead to compete, including both Janesville Craig and Janesville Parker’s boys and girls programs.

The preliminary results have been mixed—both on and off the court—for the city schools.

Craig and Parker played a girls game Dec. 12, with the Cougars winning 65-52. By the following Wednesday, the Vikings were paused due to a positive COVID-19 test within the program. The Cougars, who played one more game Dec. 15 against Oconomowoc, were also then shut down due to contact tracing with the Parker player.

The two teams returned to practice earlier this week. Parker hopes to resume play Monday at Edgerton, while Craig is set to play at Lake Geneva Badger on Saturday.

The Craig girls are 3-3 on the season, with two of the losses by a combined six points. Senior Claudia Fieiras, The Gazette’s area player of the year last season, leads the Cougars in scoring at 16.2 points a game and is now the program’s all-time scoring leader.

It has been an uphill struggle for the Parker girls.

The Vikings are 0-4 and all four losses have been in double digits.

Parker dressed only six players for its first three games due to injuries, academic issues and a code violation.

Parker’s boys, on the other hand, have had a resurgence. The Vikings are 6-3 and had a five-game winning streak snapped Monday afternoon in a loss to a very good Monroe team that featured UW-Green Bay recruit Cade Meyer.

Robert DeLong and Brenden Weis are combining to average more than 35 points a game for the Vikings. DeLong has missed the last three games due to COVID protocols but is expected back for tonight’s game at Watertown.

The highlight of the season for Parker was a 66-51 win over Craig to snap a 10-game losing streak against its crosstown rival.

The top story area-wise is taking place at Edgerton, where both the boys and girls teams are off to hot starts.

First-year coach Chris Jenny—Clayton’s father—has the Crimson Tide girls rolling, as well. Edgerton is 8-1, with the only loss to unbeaten Jefferson. Kate Gunderson, Sylvia Fox and Abby Blum are all averaging north of 12 points per game.

Along with Fieiras, the top area girls player is undoubtedly Brodhead’s Abbie Dix. The 5-foot-11 sophomore is averaging 21.8 points a game and has led the Cardinals to a 5-0 start. Dix has already drawn collegiate interest from Wisconsin, Marquette and UW-Milwaukee.

The Lake Geneva Badger girls are 3-0 in the Southern Lakes and in second place. Union Grove sits atop the conference standings at 5-0. Macie Todd leads the Badgers in scoring at 16.0 a game.

Clayton Jenny is easily the most-improved boys player in the area, with Elkhorn Area’s Jordan Johnson continuing to be the most consistent. The 6-1 senior and Division II Minnesota-Moorhead recruit is averaging 28.2 points a game and is coming off a 2019-20 season in which he was named The Gazette’s area player of the year.

The 2020-21 basketball season certainly has a different look. Fans are not allowed in the majority of gyms in the area, and if they are they attendance is very limited. Players, coaches and officials wear masks. And any positive COVID test within a program shuts it down for 14 days, along with possibly previous opponents due to contact tracing.

The season is back, though. And that means 2021 can’t get here fast enough. Milton, Verona, Middleton and Sun Prairie are among the districts that will finally tip off the basketball season in January. Let’s hope it happens.