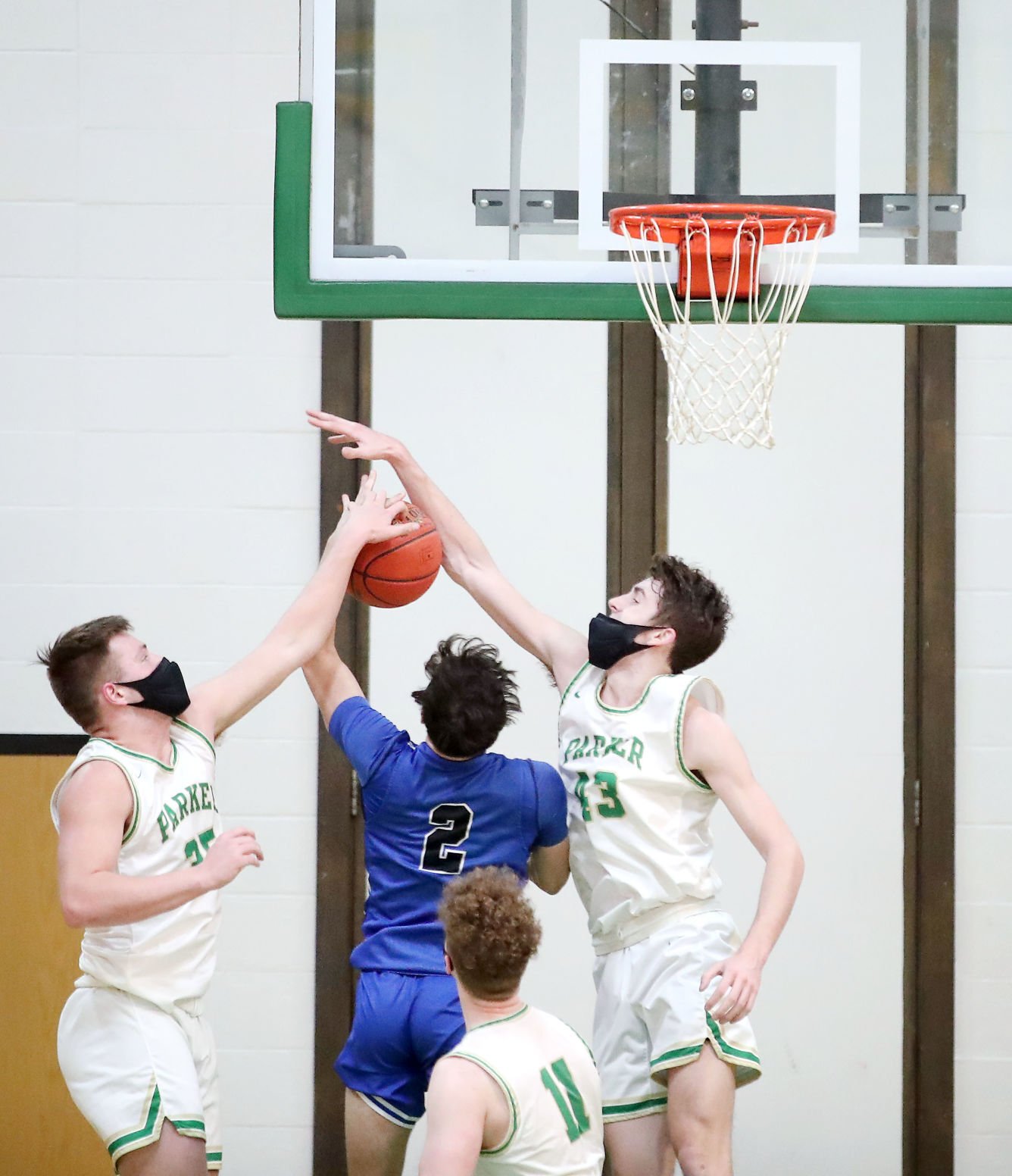 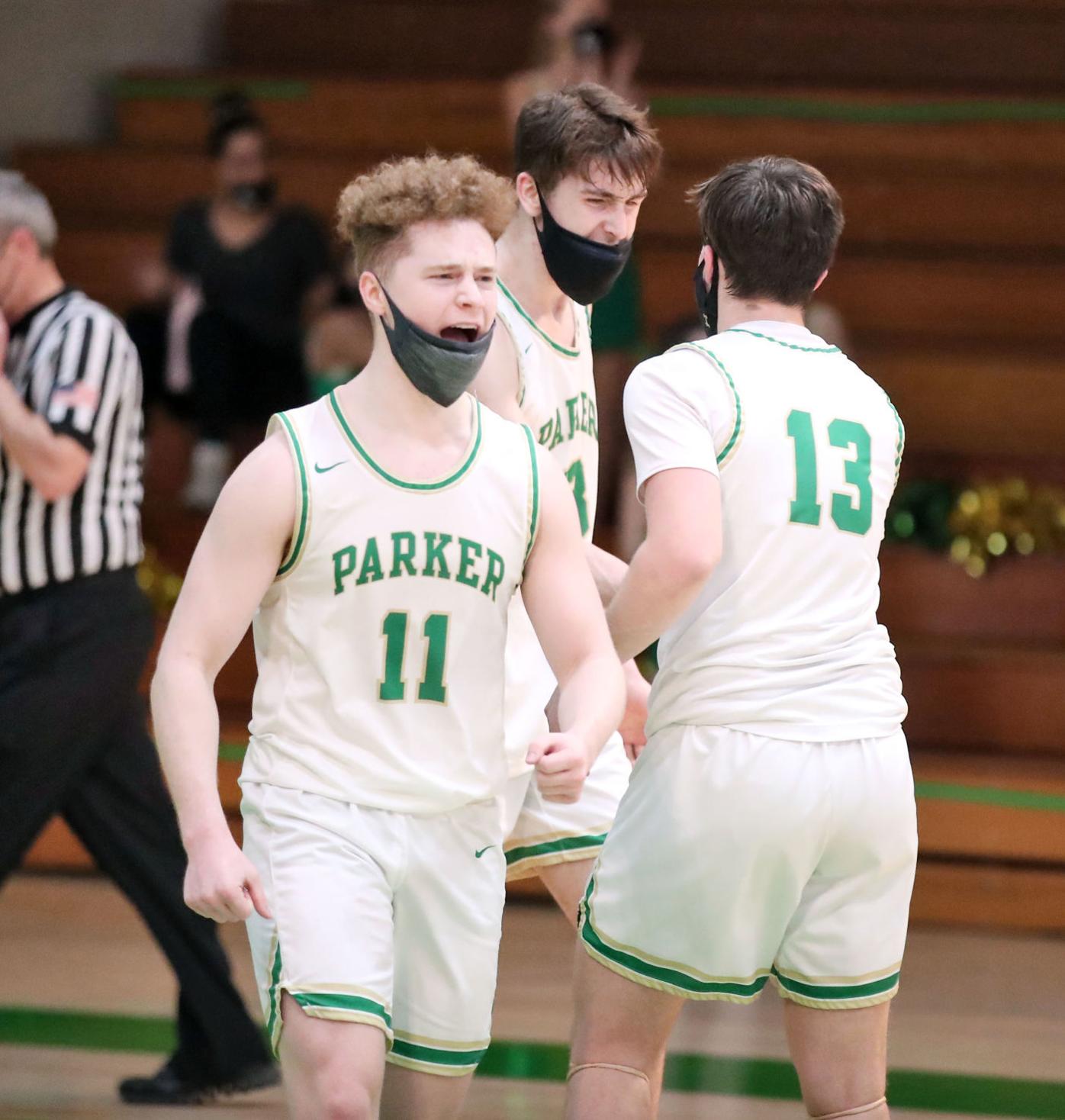 Janesville Parker’s Ethan Thompson (11), Robert DeLong (13) and Brendan Weis celebrate after defeating crosstown rival Janesville Craig last Thursday. DeLong and Weis are two of the three Vikings who have averaged double figures in scoring for one of only 39 teams statewide that played the maximum-allowed 24 games in this COVID-19 pandemic regular season.

Janesville Parker’s Ethan Thompson (11), Robert DeLong (13) and Brendan Weis celebrate after defeating crosstown rival Janesville Craig last Thursday. DeLong and Weis are two of the three Vikings who have averaged double figures in scoring for one of only 39 teams statewide that played the maximum-allowed 24 games in this COVID-19 pandemic regular season.

A topsy-turvy COVID-driven high school basketball season is winding down.

Boys postseason play began Tuesday and continues Friday and Saturday with regional semifinal and final games. Unlike the area girls teams, I fully expect at least a couple area boys teams to advance to sectional play.

So what did we learn in this hectic winter that saw a delay to the start of the season, a number of COVID-related cancellations and postponements, as well as a number of eye-opening individual and team performances?

Probably the biggest thing we learned is that any type of season is better than no season at all. Considering several districts throughout the state opted out of the winter sports season, playing between 18 and 24 games was a bonus, especially for all the seniors putting on the uniform for the last time. Many weren’t sure they’d get to play any games at all back in October.

Janesville Parker’s boys team was one of the few in the state that completed a full schedule.

According to Mark Miller of Wisconsin Basketball Yearbook, Parker was one of 39 teams statewide to play a full schedule out of 485 teams. The Vikings had one COVID-related cancellation the entire season, and they filled the vacancy that day with a home game against Milwaukee Lutheran.

Games themselves were anything but normal, starting with game attire. Players were required to wear masks from the time they stepped into the gym. Whether you were on the bench, in the game or warming up, masks were a must. Most players took it in stride and got used to wearing one, but many pushed the boundaries. Several players decided wearing it like a chin strap was more comfortable. Hopefully masks are one and done after this season. I know not a single player will complain if that’s the case.

Fans, those few that were allowed to attend, were also required to mask up. Several districts allowed no fans for most of the season, with Janesville allowing each player up to two tickets for family or friends for home games only.

I covered the Edgerton at Jefferson girls Division 2 regional final game last Saturday where players from both teams were allowed four tickets each. Naturally, it provided the best atmosphere of any game I covered all season. Watching games live on a social application was a much-needed outlet for fans and the media, but nothing beats fan interaction in the stands.

The Gazette will publish it’s all-area boys and girls teams later this month, but several area boys kept scoreboard operators busy. Elkhorn’s Jordan Johnson tops the list. He had a 47-point performance in a win over Greenfield and then topped himself by scoring 49 in a regional quarterfinal loss at Mukwonago on Tuesday. Edgerton’s Clayton Jenny, Walworth Big Foot’s Gus Foster and Orfordville Parkview’s Connor Simonson and Tyler Oswald all had games with 36 points or more.

Parker and Edgerton share the honor for the boys team of the year. The Vikings went 16-8, played arguably the toughest schedule in the state and at one time were ranked tenth in the state, all leading to the program’s most successful season since the 1981-82 Big Eight championship team. The Crimson Tide finished 20-4, also completing a full schedule, and figure to be a tough out in the tournament despite being moved to Division 2.

Edgerton, under first-year coach Chris Jenny, gets the nod for area girls team of the year. The Tide went 17-5, and with only two seniors on the roster figure to building toward a strong future. Edgerton’s five losses were by a combined 25 points.

Nothing was normal about the 2020-21 season, but at least we had a season. We played the cards that the pandemic dealt us, and came out of it with a decent hand.

The Blackhawks get it done defensively, limiting opponents to 46 points a game while averaging 48.8. Drew Evans averages 12.1 points a game, with Carson Baker right behind at 11.4.

Parker won its last three to end the regular season and averages 61.5 points a game. Senior Brenden Weis leads three players averaging in double figures in scoring at 16.5 a game. Senior Robert DeLong is at 14.1 and junior Jacob Naber at 13.0.