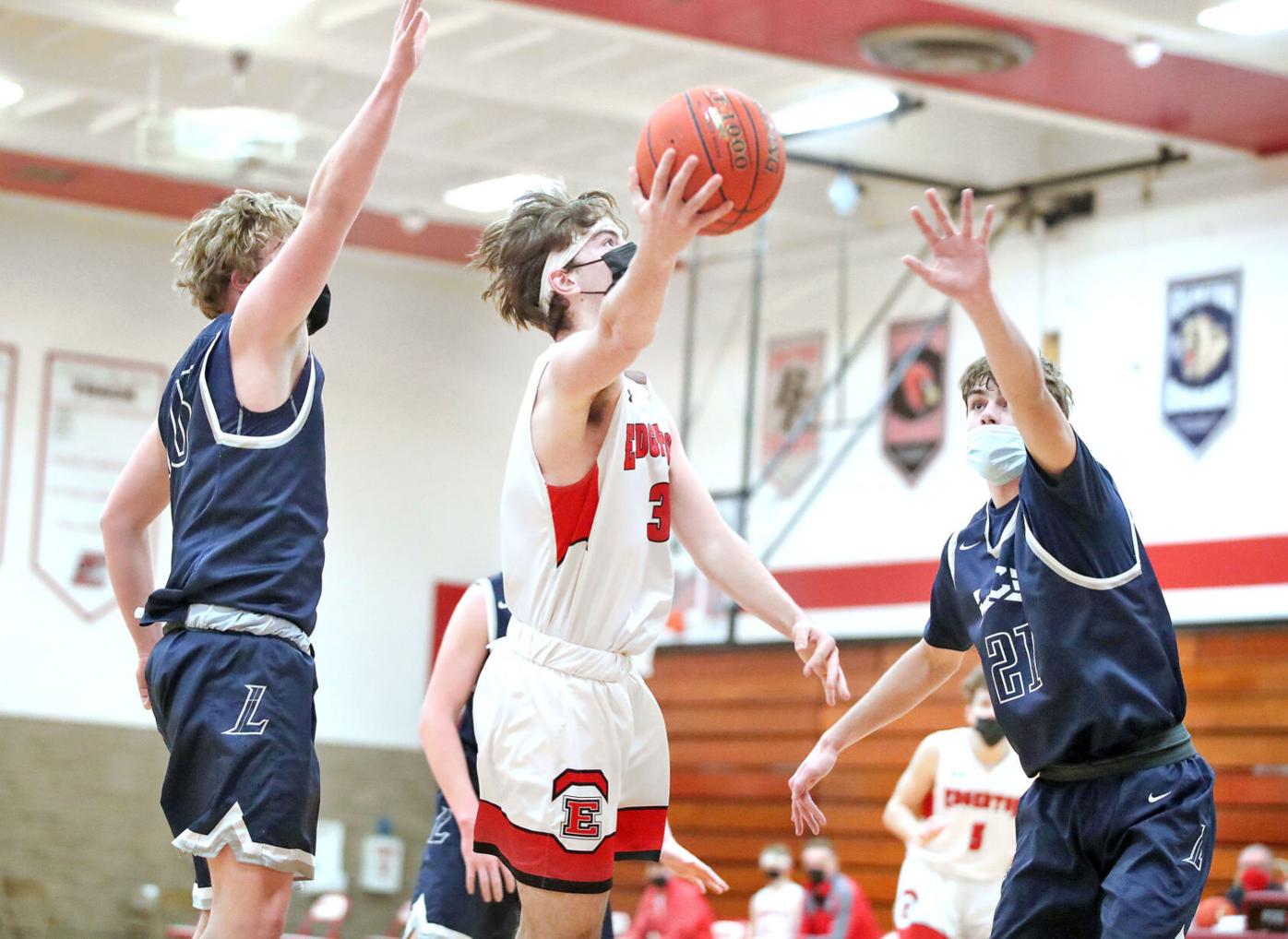 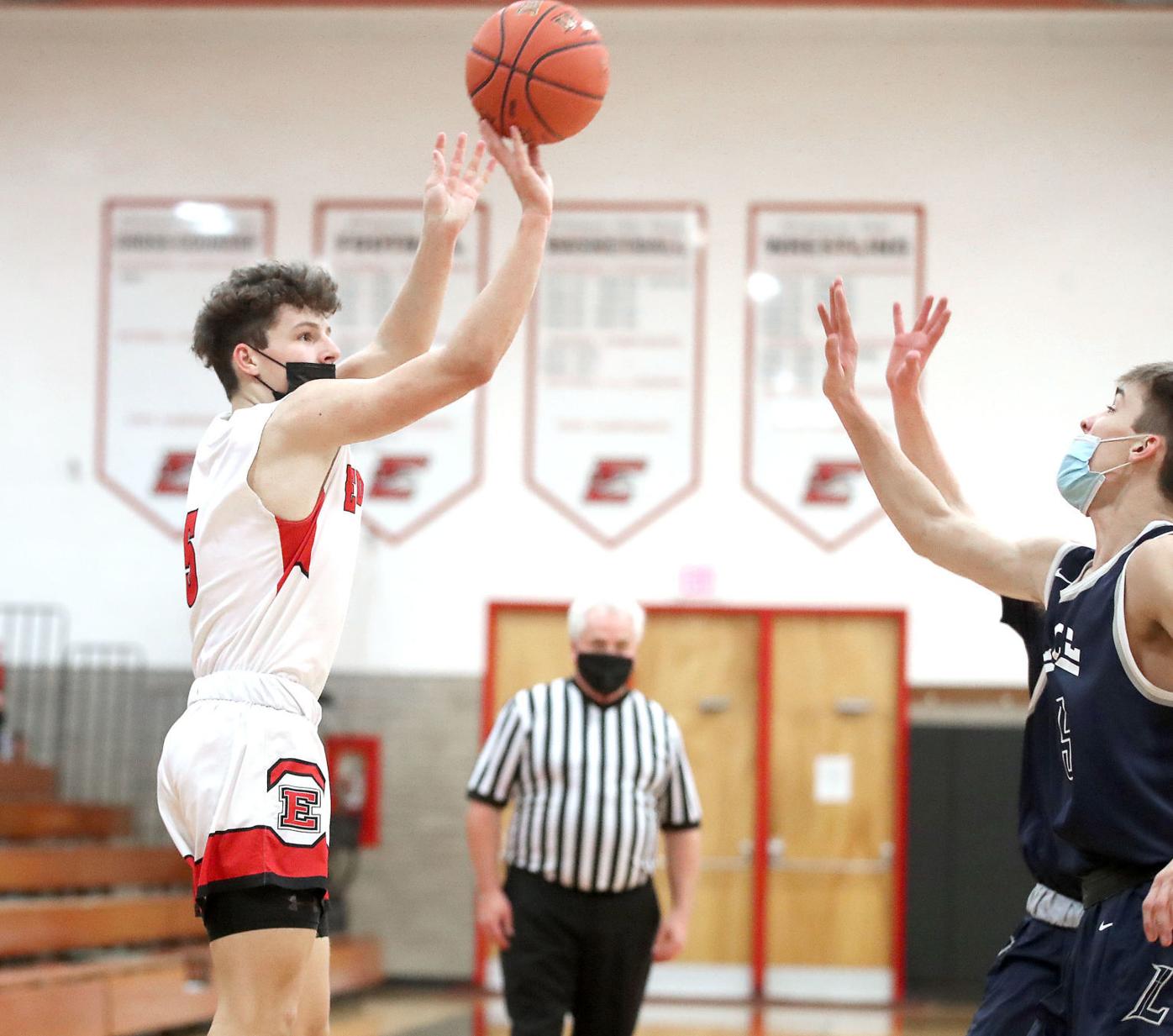 Edgerton’s Connor Coombs pulls up for a shot during their non conference home game against Lake Country Lutheran High School on Thursday, Jan. 14.

Edgerton’s Connor Coombs pulls up for a shot during their non conference home game against Lake Country Lutheran High School on Thursday, Jan. 14.

When it came to the boys and girls postseason basketball tournaments, the WIAA had no choice.

A COVID-driven season forced the state’s high school sports governing body to revamp the divisions and assignments for the tournament series.

With so many Division 1 schools opting out of the winter season, including all four Madison public schools and the Milwaukee city schools, a number of area schools were bumped up a division.

Edgerton’s boys and girls teams are a combined 28-4 on the season, and both would have likely made strong runs toward a state tournament berth in Division 3.

Now the road to state will be much, much tougher.

Edgerton has been bumped up to Division 2 for the tournament series.

The Crimson Tide girls are 15-2 under first-year coach Chris Jenny and in the midst of a seven-game winning streak.

The other half of the sectional features state-ranked teams Reedsburg, Waupun and Madison Edgewood. Reedsburg is 9-1 overall and ranked third in the latest wissports.net coaches poll.

So why is Reedsburg and Edgerton being in the same division a big deal?

Reedsburg’s enrollment is listed at 884. Edgerton sits at 511. That’s a huge discrepancy, but unfortunately was the only alternative if the WIAA was going to fill all five divisions of the postseason tournament with an equal number of teams.

The Edgerton boys are in a similar position.

A move up to Division 2 puts the Crimson Tide in a sectional that now features state-ranked Wisconsin Dells and Monroe.

Beaver Dam had won the last three girls Division 2 state titles and was on the way to a likely fourth straight before COVID-19 ended the 2019-20 season. The Golden Beavers are one of many schools that were bumped up this year and are now in Division 1.

To even make it back to state, Beaver Dam will have to make it out of a sectional that includes top-ranked Kimberly and Germantown.

Janesville Craig and Janesville Parker were both Division 1 schools heading into the season and will remain in Division 1 for the tournament.

Parker’s boys are 11-5 on the season and in the midst of the best season for the program in over 20 years. The Vikings are in Sectional 3C along with Craig, Milton, Monona Grove and Fort Atkinson. Waukesha West is the only state-ranked team in the entire sectional, but Sun Prairie is sure to be a force. The Cardinals were expected to compete for a Big Eight Conference title heading into the season but have not played a game yet and won’t open the season until Saturday due to COVID-19 restrictions in Dane County.

The Craig girls are 6-6 on the season but have proven, when healthy, that they can compete with any team. The Cougars’ sectional features only one ranked team in Kettle Moraine, but Big Eight powerhouse Middleton is also in it. The Cardinals, much like Sun Prairie, have not begun their season yet due to COVID concerns.

Like everything else in this COVID-crazy season, decisions are made on the fly. And changing placements and divisions for a number of schools for the tournament series is a decision the WIAA had no choice but to make.

Edgerton has rattled off seven straight wins—all by double digits.

Turner had won seven straight games before losing at McFarland on Monday. That stretch included a 63-56 win over previously unbeaten Brodhead when the Trojans’ returned from a multiple-week pause.

Olivia Tinder leads the Trojans in scoring at 13.2 a game.