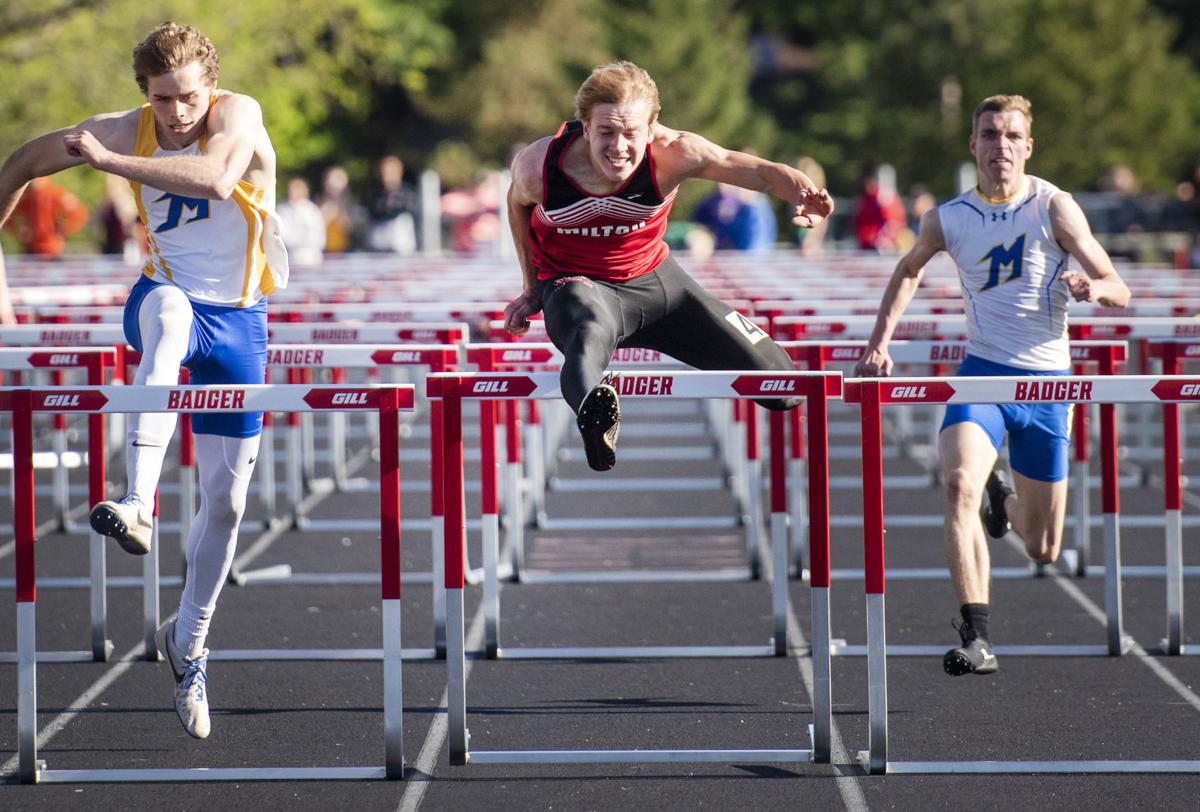 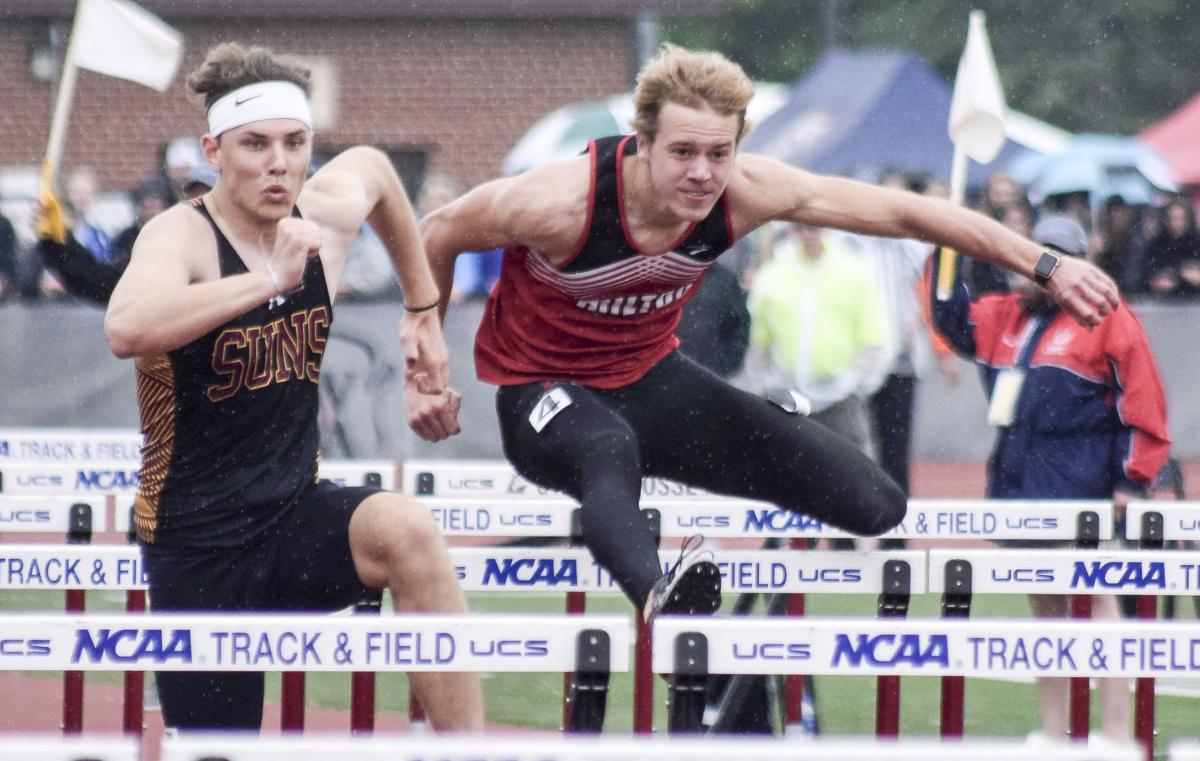 Milton junior Dane Nelson clears a hurdle during the Division 1 boys 110-meter hurdles finals on Day 2 of the WIAA state track and field meet at Veterans Memorial Field Sports Complex at UW-La Crosse on Saturday. Nelson went on to finish third in the 300 hurdles with a time of 39.53 seconds. 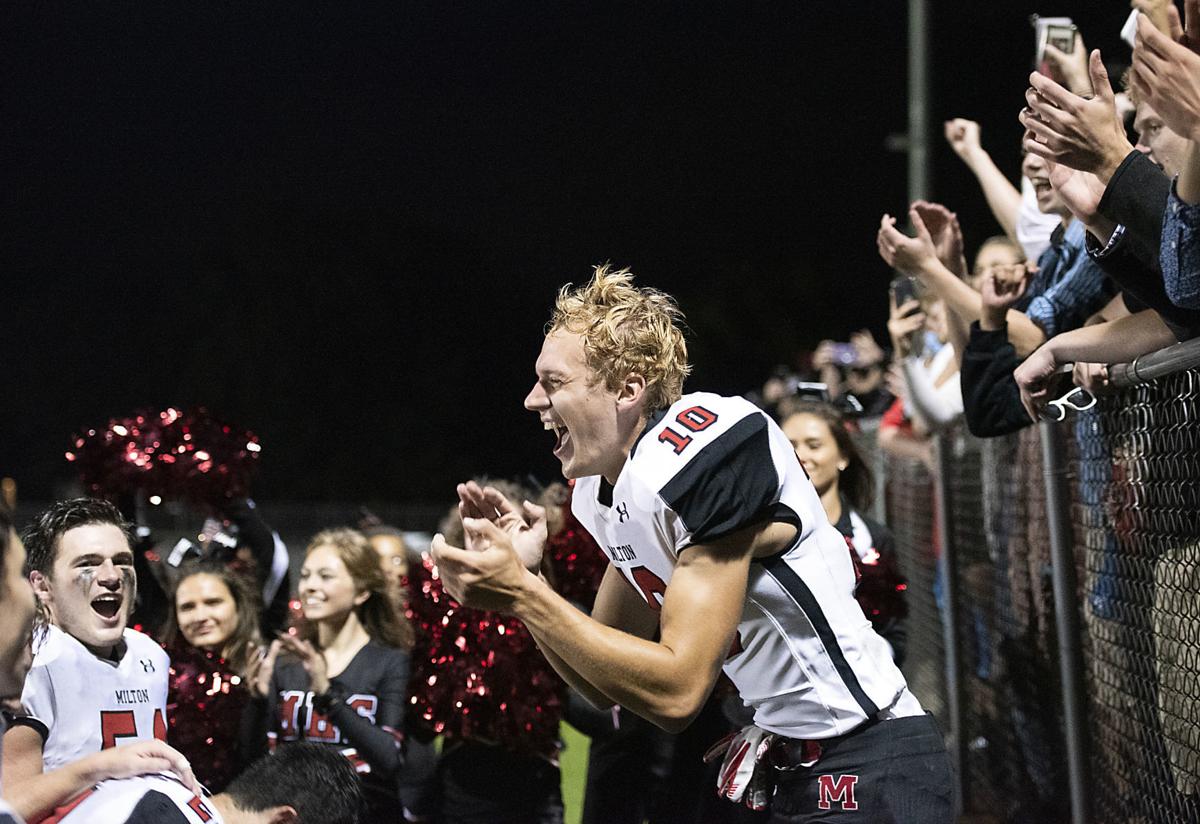 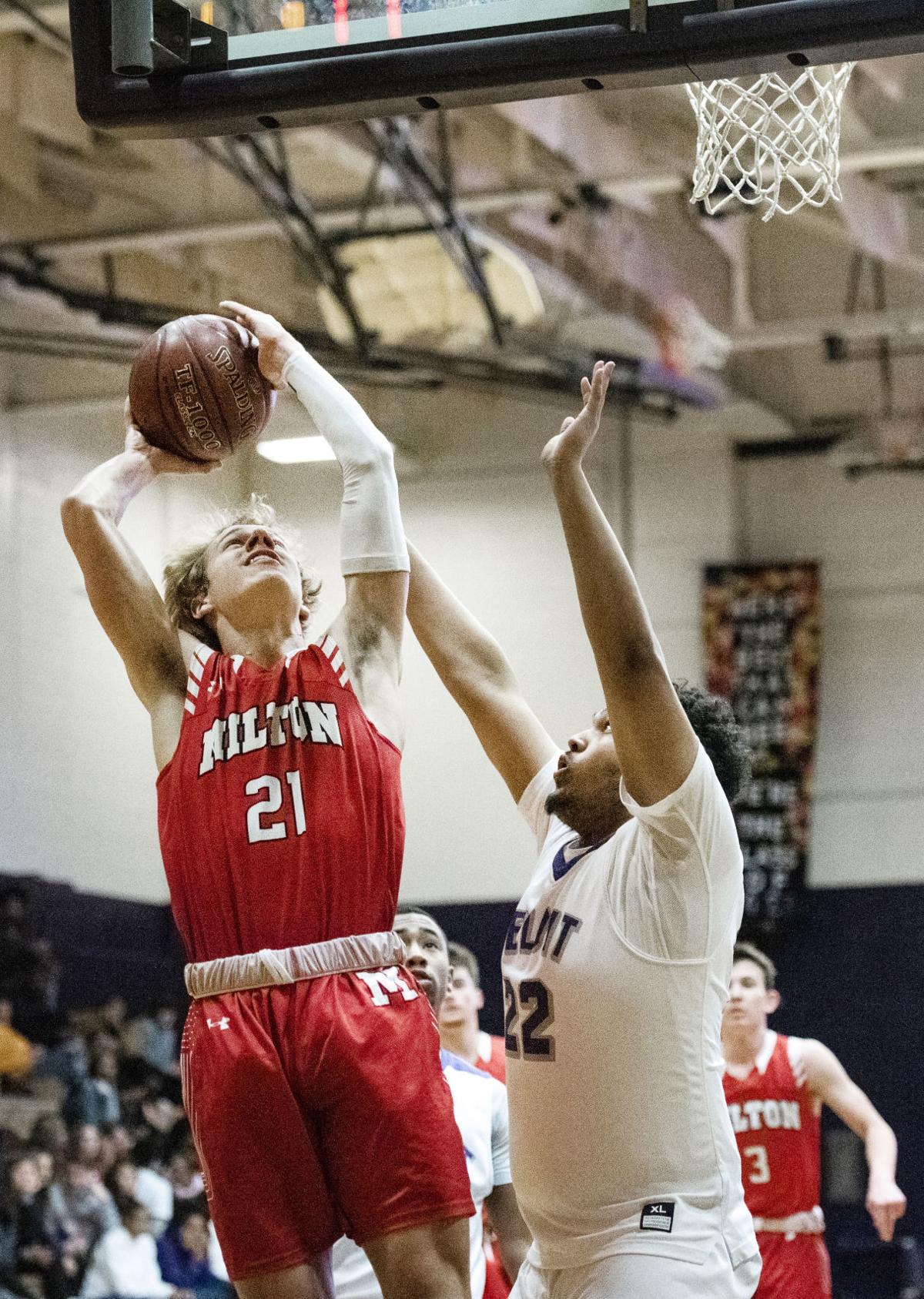 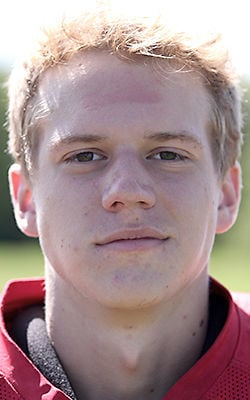 Milton junior Dane Nelson clears a hurdle during the Division 1 boys 110-meter hurdles finals on Day 2 of the WIAA state track and field meet at Veterans Memorial Field Sports Complex at UW-La Crosse on Saturday. Nelson went on to finish third in the 300 hurdles with a time of 39.53 seconds.

Nelson, a senior at Milton High, permanently left his name in the track and field record books last year as a junior. He set the school record in the 110-meter hurdles with a time of 14.76 seconds at the sectional meet. Nelson went on to race in two events at the WIAA Division 1 state meet, including a third-place finish in the 300-meter hurdles.

“I wanted to get back to state again, relive that experience and place better than last year,” Nelson said.

In the 110-meter hurdles at state, Nelson finished with the best time in his heat (14.78), but ended up finishing seventh in the finals—one spot shy of the podium.

The hurdler was hoping to improve on his performance this year. He said he was progressing well toward that goal in the offseason.

“I went to a couple camps as I was searching for a college decision. I went to more college camps,” Nelson said. “I felt like I was getting better through that.”

Unfortunately for Nelson, because of the coronavirus pandemic, he will never be able to show off that progress.

At least not at the high school level.

Nelson signed a National Letter of Intent to compete on the track and field team at UW-Milwaukee in January.

Although the high school track season was canceled, Nelson was not without athletic success his senior year. Nelson helped the football team to a 9-2 record and a share of the Badger South Conference title.

“When I got the job at Milton, we were opening the weight room in the morning,” Milton head football coach Rodney Wedig said. “Dane was showing up all the time.

“As the track season went on I said, ‘Listen Dane, you have a really good chance of going to state. You should probably slow down a little bit here.’ I actually had to tell him I don’t expect him to be there.”

As a wide receiver, Nelson was selected to play in the WFCA All-Star Game. On the season he caught 23 passes for 646 yards and 11 touchdowns.

“He’s just an incredible athlete, as far as an explosive athlete with speed and hands,” Wedig said. “Wish I had him for a couple more years.”

In the winter, Nelson was part of a Milton basketball team that had its best season in over a decade.

While Nelson was a star on the football field and track, he was more of a role player on the court. Nelson played in 22 of Milton’s 23 games and averaged 1.9 points per game for the 12-11 Red Hawks.

“For him to change roles on the basketball team showed extreme selflessness,” Milton head basketball coach Alex Olson said. “It trickled down to the younger teammates.”

“Both the coaches I had were phenomenal, really pushed me,” Nelson said. “I know that will help when I get to college.

“Really hoped I would have had another track season, of course, but it’s just what happens.”

Nelson knows their are other high school athletes who had it worse.

Nelson will join a Milwaukee men’s track team that placed second at the Horizon League Indoor Championships this season.

Nelson said he liked the campus as well as the coaching staff.

“I think he’ll have major success,” Olson said. “He comes from a high-character family.

“He knows how to be a good teammate. He has a strong work ethic. Coaches are going to love what he brings to the table.

“He’s able to put his hard hat on and go to work.”

When it’s all said and done at Milwaukee, Nelson is hoping to leave a lasting impact—just like he did at Milton.

“I just want to leave a mark there,” Nelson said. “I don’t want to waste an opportunity to run collegiately.

“I was hoping to break a couple more records. I know as a freshman I had a goal to break as many school records as I could at Milton High School. Just will have to settle with one, I guess.”